Editor’s note: The opinions expressed by tour guides in this article are their own and do not represent the views of the tour companies and organizations that they work for.

Black tour guides often have extra responsibilities they must perform while engaging with the public: to be truthsayers and to interpret local history through both the established narrative and from the perspective of the disenfranchised. The alternative would be to whitewash history to avoid sharing stories that might make some tourists uncomfortable.

Not every tour guide is at ease with giving an unbiased re-telling of Philadelphia’s history. Guides may claim that their job is to simply entertain and not necessarily to teach i.e. to put a cherry on top of a planned vacation and to make their guests feel good about learning something.

If you are a Black or Brown tour guide, the Philadelphia experience is very different. You bite your tongue at the President’s House as you recount the lives of some of George Washington’s slaves such as Richmond, Oney Judge, Hercules, Moll, Austin, Giles, Paris, and Christopher and Joe Richardson.

As a Black guide, you go down the list of Ben Franklin’s accomplishments while at his home and at his grave, but you do not mention his slaves. You reconcile this omission with Franklin’s attempts to undo slavery in his later years.

You walk past the Delaware River waterfront and talk about how Philadelphia was once the center of the Thirteen Colonies and watch as your guests’ smiles become slightly crooked as you mention that the homes and local economy was built by the slave holdings of wealthy Philadelphians like Benjamin Chew, Stephen Girard, and Robert Morris.

“Would they care to hear about the Lenape?,” you wonder. The local indigenous population is often portrayed only as victims, but they are truly are the beginning and foundation of Philadelphia history. “Or would they rather just take a selfie in front of the Liberty Bell, which makes so many visitors feel proud to be an American?” 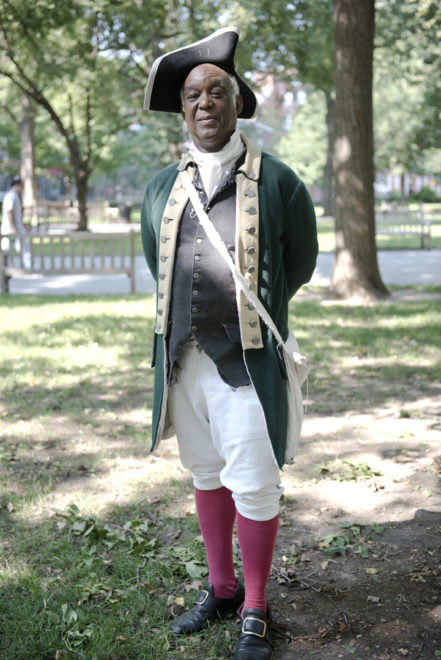 Joe Becton is a local celebrity in the tour guide industry. He says that most tourists shy away from discussions of American history and race and that they typically just want to hear the stories they already know. | Image courtesy of Joe Becton

Can you even broach topics related to Hispanics, Asians, and other ethnic groups that came to the city as immigrants with dreams of prosperity only to be marginalized and redlined in their respective neighborhoods.

The task is difficult because you want to give yourself wholeheartedly into getting the message across that diversity is embedded in Philadelphia’s DNA, that minorities were here prior to the city’s founding by white men, and that the city has a long legacy of systemic racism and economic inequality that continues mostly unabated today.

As a Black tour guide, you often feel that many misunderstandings with guests are based on our skin color and that our history is routinely summed up as slavery, religion, the push for civil rights in the 1960s, and now the Black Lives Matter movement. For your part, you try to shine a light on the achievements, movements, and events that helped shape African-American history, while keeping local history focused on the typical highlight reel featuring the Founding Fathers, the American Revolution, cheesesteaks, art museums, and the Reading Terminal.

A History of Exclusion

The whitewashing of local history has been an ongoing conversation among local tour guides for a long time. Last year, a handful of Black and Brown guides, myself included, were asked to lead a forum on historical interpretation of Black history. Unfortunately, not much has changed since that event. Will the renewed demand for social justice after the murder of George Floyd by a Minneapolis police officer push this dialogue forward? Or is this movement simply another heat-of-the moment effort that will fizzle out before decisive actions to make actual change take place?

I reached out to three fellow local guides who spoke at last year’s forum hosted by the Association of Philadelphia Tour Guides (APT). They have each developed their own method to ensure that local history is not whitewashed and use their tours as opportunities to educate and, hopefully, open closed minds.

“Guides need a much more rounded education of Black history. It’s about the ugly work. When you can come out of it, you become a better guide,” said Michael Idriss, a tour guide with Urban Adventures (UA) and a recent winner of the “Best Guide of the Year.” In the past Idriss felt as though his historical interpretation options were limited. Most UA tours start in the middle of colonial history and lead up to the American Revolution. But Idriss believes that Philadelphia’s history should really start at the beginning. “You’re not going to hear about the Lenape and slavery if you start from the white perspective.” Idriss’ frustration of not being able to tell the full story of local history led him to work with like-minded guides to develop Katika Experiences, a tour company that offers events and guided tours covering the local Black experience–from the London Coffee House, Congo Square (Washington Square), Christ Church, and the experiences of Black and Brown Philadelphians living during colonial times.

“There is a hunger for change, and we should facilitate it, but there must also be a need to want this change. We must realize that there are some people we will never reach at all,” said Robert Branch, a local interpreter of the lives of Richard Allen, Octavius V. Catto, and William Still. Branch said that he always hopes that he can find empathy among the guests on his tours and that he ultimately wants them to leave Philadelphia with new knowledge and a new awareness. In his tours, Branch highlights the hypocrisy of a country that was designed from the foundation up for the freedom of a selected group i.e. white people. He feels that it is important to explain to his guests that America was built on the backs of Black slaves who were simultaneously being brutalized and murdered. The systemic oppression that Black and Brown people experience today is deeply rooted in the past. Idriss wants his guests to understand that slavery was wrong and should not have happened, but it did and we must stop ignoring history and face the ugly truth head on.

Like myself, Branch believes that the whitewashing of American history is often perpetuated by tour guides who are not interested in learning about the African American experience in Philadelphia. Yet, there are a growing number of tourists who want more than a just a family photo op or to simply be entertained. “As guides, we need to facilitate more frank and honest discussions. There are guests that want to learn about more than just ‘XYZ’ and the basic facts about a place,” said Branch. “I have observed this desire to learn America’s complete history through watching the protests and the diverse groups of activists fighting for social justice. This group exists because of a desire to see things how they really are and to effect change.” 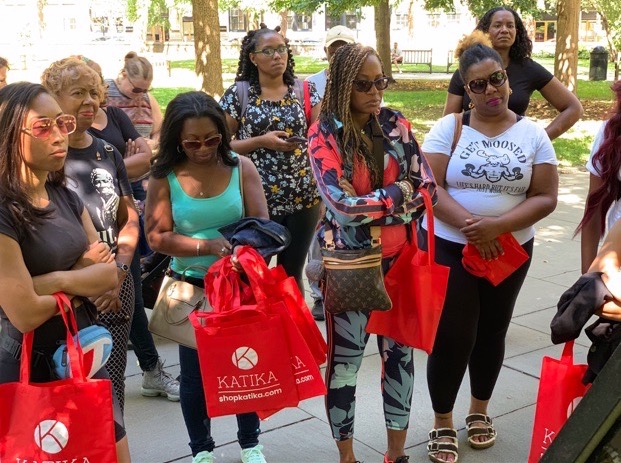 Joe Becton, a local celebrity tour guide, said the majority of tourists just want to hear the stories they already know. Anything else and their ears closed and their eyes squeeze shut. Most tour guides know this situation well and accept it by providing a happy tour that leaves the tourists smiling and paying a good tip.

The whitewashing of history by tour guides can also be attributed to an aversion to triggering white guilt and anger expressed by guests. Becton was once confronted at the Liberty Bell by a group who argued that the landmark had nothing to do with Black people and to stick to telling the history of the American Revolution.

It is far easier to not say anything than to speak up. That is the main issue with a number of guides. Don’t rock the boat and stay silent. The traditional belief is that a tour guide’s job is to take American history and make it digestible for visitors. “Not all of them are expecting to take part in a discussion about the dark truths of America’s past, but if we can at least make them aware by bringing it to their attention, then that is a start,” said Idriss.

A few months ago I was in Charleston, South Carolina for a tour guide forum. After the day’s events I visited the Old Slave Mart Museum on Chalmers Street. While there, I listened as one of the tour guides explain the Middle Passage to a white family. As the guide described the hull of the ship and how human cargo was transported, a teenager in the group asked, “Where were the bathrooms on the ship?” I let out a muted chuckle and then reflected on the grim fact that he truly did not know because the Middle Passage is often glossed over in history class. After the teen’s question, a puzzled look came across his face when he also asked, “Where did they sleep?”

Being a tour guide is a social and ethical responsibility. Yes, we are entertainers who interpret the past, but we must also understand the importance of our roles. There are far more white guides than Black ones. If tour companies cannot offer difficult, but vital facts about American history during their tours, then the public must seek out guides who can. Allow them the flexibility to insert hard truths into the common narrative. And if white guides refuse to learn about Philadelphia’s history of racial and economic transgressions, and address difficult aspects of this history to their audience, then they are guilty of keeping the American myth alive. People become tour guides to share what they know, but if they know only half the truth, then they really know nothing at all.