Catching Up With a Baseball Legend in Port Richmond 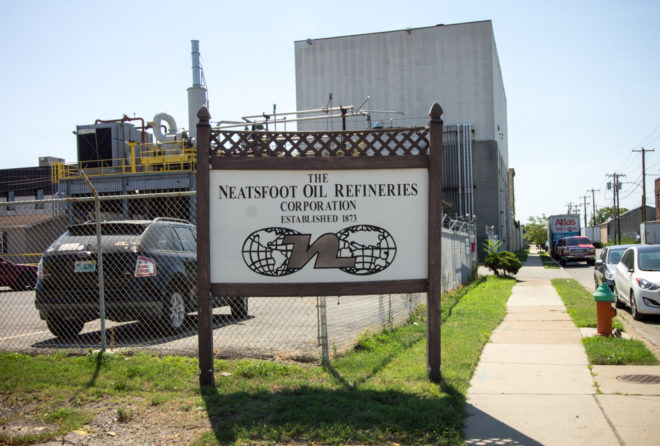 The Neatsfoot Oil Refineries Corporation in Port Richmond was founded in 1873 and is one of the oldest continually-owned family businesses in Philadelphia. | Photo: Michael Bixler

The Philadelphia region’s role in baseball history is deep. The Phillies, formed in 1883, are the oldest franchise in all of professional sports to have operated in one city. The mud that baseballs in Major League Baseball (MLB) are rubbed with prior to use originates from a secret location on the New Jersey side of the Delaware River. And another long-standing ritual, practiced by Little Leaguers and MLB stars alike, relies on an old product with long-standing Philadelphia ties– neatsfoot oil.

The name “neatsfoot oil” derives from “neat,” an Old English word for “cattle.” Dating back to the 16th century, the original source for the oil was the shinbones of cattle and horses. Unlike most fats from warm-blooded animals, this oil remains liquid at room temperature. Historically, it’s been used in the process of tanning leather.

Philadelphia’s ties to neatsfoot oil go at least as far back as 1873, when Abram Sulzberger emigrated from Germany and leased a parcel of land along East Ontario Street in Port Richmond to establish a rendering plant. He changed the family name to Berg and the new business became The Berg Company, quickly growing to become one of the largest renderers of animal parts in the city at the time. 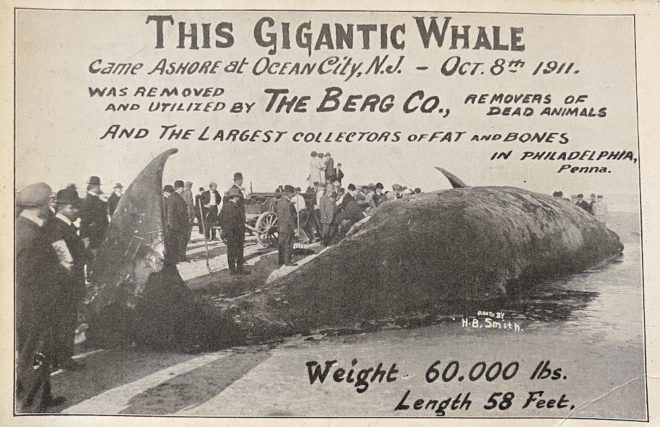 Postcard of a beached whale in Ocean City, New Jersey in 1911. | Image courtesy of A.J. Berg

The company employed cart drivers to pick up carcasses around the city to make fertilizers and glues. There were other sources of material, too. “It was the biggest importer of whale oil, which was the original source of neatsfoot oil,” explained A. J. Berg, currently the company president and fifth generation member of his family to run the business. A postcard from 1911 depicts a beached whale surrounded by crowds of people, with the caption, “This gigantic whale came ashore at Ocean City, N.J., October 8, 1911. Was removed and utilized by The Berg Co., removers of dead animals and the largest collectors of fat and bones in Philadelphia, Penna.”

According to Berg, the company’s land originally extended from its refinery on East Ontario Street, all the way down to the Delaware River, where ships could unload whale carcasses, with the land in between filled with corrals for the cart horses. “As mechanization came, we didn’t need the land for horses and wagons,” explained Berg. Today the plant sits on roughly two and a half acres of the original parcel. The surrounding area is now home to truck repair businesses and recycling and scrap metal yards. The stretch of waterfront is dominated by PhilaPort. Eventually the company transitioned from being a renderer to full time production of animal extracted oils.

The company beginnings coincided with an important development in the history of baseball: the adoption of the baseball glove. Although baseball gloves began appearing just after the Civil War, they weren’t standard equipment until the late 19th century. “There was a lot of debate whether they gave an unfair competitive advantage and whether they were changing the game,” said David Jenemann, Professor of English at the University of Vermont and author of The Baseball Glove: History, Meaning, Material and Value. “The first gloves were catcher’s mitts. When you see old photos of catchers, their hands were a horror show of missing digits and broken fingers.” 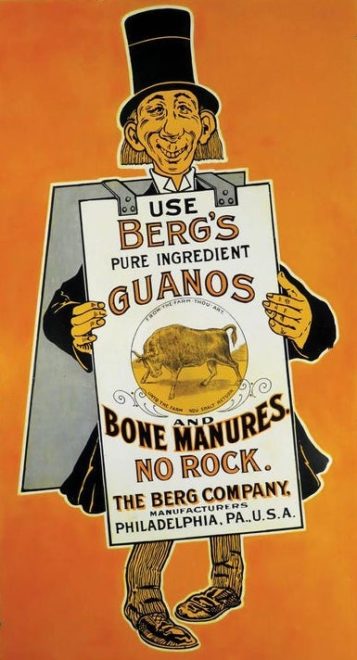 As baseball glove use became more common among other positions as well, advice on methods of caring for them also appeared. “Throughout the early 20th century, you see references to glove oil,” Jenemann said. “Neatsfoot oil was a typical choice since it was used in the process of tanning leather.” And like so many things revolving around baseball, ritual and mythology followed. “There probably isn’t a piece of sports equipment that has more mythology and cultural practice surrounding it,” said Jenemann.

Conditioning a new glove meant not just obtaining this archaically-named oil, but following a precise method of break-in. As MLB’s official historian John Thorn recalled, “Any boy with a glove back in the 1950s, like myself, would apply neatsfoot oil to a glove, then place a ball in the pocket, then tie it up tight with string for the better part of a week. This would discolor the glove, but preform the pocket.” According to Berg, a final step could include placing the tied-up mitt under a mattress for two weeks.

With this growing use for their product, in 1930, the Bergs changed the company name to Neatsfoot Oil Refiners Corporation. “It’s a generic term that my grandfather adopted,” explained Berg. “With a small ‘n’ it is the generic product, with the capital ‘N’ it is our company.” 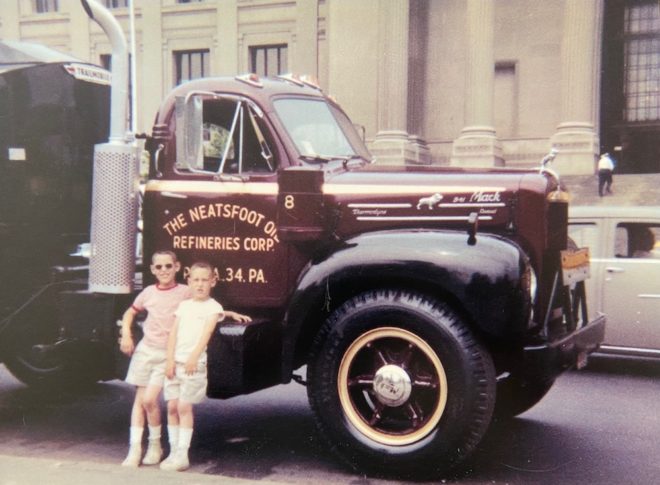 A.J. Berg, left, and his brother Andrew pose with their father’s new company truck in from of the Franklin Institute in 1959. | Image courtesy of A.J. Berg

“Then in the 1950s, my grandfather and father devised a proprietary blend of animal oils. Every animal produces triglycerides. This is what they used to replace whale oil.” But the whale oil product likely remained in use for a while after that. “It didn’t take a lot of oil to condition a glove,” Berg said. “So if, as a kid, your bottle of neatsfoot oil came from your grandfather, it was probably whale oil.”

Other industries also rely on neatsfoot oil. Its use as a leather conditioner goes beyond baseball to include saddles and other equestrian tack. “Everyone who rides horses knows neatsfoot oil,” said Berg. He also cites the manufacturing of metal items such as guns and car parts. “You can’t use petroleum-based oils when you stamp and form metal,” he said. “You need a natural oil. All the major gun manufacturers buy from us. It only takes a drop to make a bullet, but think of how much ammunition is manufactured in this country each year.”

Now 70 years old, Berg is the president of the company, while his father, Alan Berg, is CEO. The younger Berg didn’t originally plan on going into the family business, but he also wasn’t keen on following his parents’ goals for him, which included college. “When I decided to not go to college, my father found a job for me,” Berg recalled. “He reached out to the owner of a hog slaughterhouse right around the corner from the refinery. He said, ‘Give my son a job and make it the worst one you’ve got.’ I spent about 90 days yanking the intestines out of hog carcasses for $1.50 an hour—four times the minimum wage at the time! Then, I went to college.” 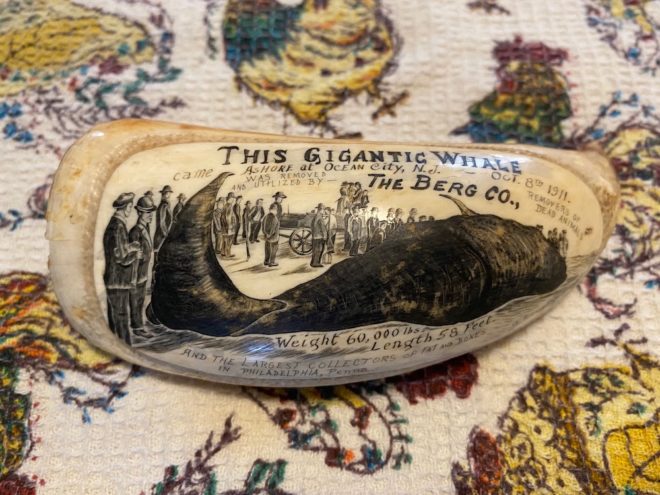 In the 1980s, the company added a new subsidiary, Advance Technologies LLC, to branch out into the manufacturing of synthetic lubricants and changed the company name once again to Nupro Industries Corporation. “75 percent of the company’s business is still neatsfoot oil,” said Berg. “Very few companies manufacture this product. Perhaps three in the U.S. and maybe another three in Europe.”

Aside from being one of those few, Berg’s company is also one of the longest-lasting. He said City officials have told him they are one of the oldest continuously operating Philadelphia businesses that is still in its original location.

When Berg became involved in the running of the company he had ideas about raising their public image. “I wanted to get more involved with the baseball connection. Like having Neatsfoot Oil Day at a Phillies game, where we’d give every kid a little bottle of it,” he recalled. But since their clientele were resellers who bought vast quantities and bottled it for retail sale, his father and grandfather weren’t interested in publicizing to the general public.

And so, as the company approaches the 150-year mark, it continues to maintain a low profile in their original location in Port Richmond, quietly playing their role in a baseball tradition.