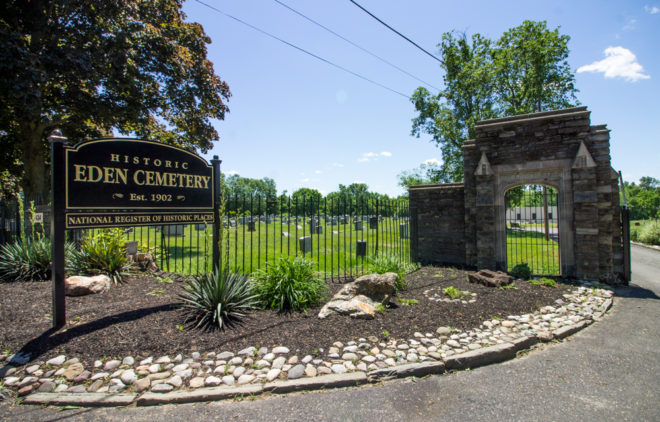 Eden Cemetery is an historic African-American cemetery in Collingdale, Pennsylvania. It was established in 1902 and is one of the oldest African American cemeteries in the country. It is the final resting place of civil rights figures William Still and Octavious V. Catto, architect Julian Abele, famed contralto Marian Anderson, and little-known abolitionist Louisa Burr. | Photo: Michael Bixler

Throughout her life, Louisa Burr lived in the shadows of three men: her father, Aaron Burr, the third vice president of the United States, her younger brother, John Pierre Burr, and her first husband, Francis Webb.

Louisa was born in 1788 to parents Aaron Burr and his governess, Mary Eugenie Beauharnais Emmons in Kalkutta (Calcutta) or in Saint Domingue (Haiti/Dominican Republic). She would never be acknowledged by her father until possibly towards the end of his life. Instead, by the age of 15 she worked for George and Sophie Harrison and the Joshua Francis Fisher family who were prominent among the wealthy circles in and around Chestnut and Walnut Streets.

The majority of Louisa’s life was spent tending to the needs of the Fisher family in all matters domestic, including cleaning, cooking, and the care of two generations of children. Her responsibilities earned her the admiration of the Fisher family that extended to them paying for her funeral and tending to not only her children’s financial needs but her grandchildren as well.

Today, her remains rest in an unmarked plot in the Olive Cemetery section of Eden Cemetery, one of the oldest extant African American cemetery in the country. Her brother, John Pierre Burr, was identified and given a proper headstone by the Aaron Burr Association in 2019. However, progress on Louisa’s own reburial has stopped since it has become difficult to properly identify her among other family members placed in the former Olive Cemetery, which was the premier resting place of African Americans until it was closed in 1901 due to being a “sanitary necessity.” The cemetery, established in 1849, was located along Girard Avenue between Marion and Belmont Avenues and was one of the biggest African American-run businesses in Philadelphia during its time.

To almost every person who reads this article, Louisa’s life may seem unremarkable. As I learned more about her, though, I slowly realized that the reason we should pay attention to her is for what she did in her life to lift up others. Now, after 253 years, Louisa is still only known to a select few as Aaron Burr’s only illegitimate daughter long ago buried in an unmarked grave.

“What makes Louisa unique is not that she, her husband, and brother John Pierre Burr were abolitionist but that she worked for the Fisher Family who were  Copperheads,” said historian Mary Maillard.

I do not know the details of Louisa’s day-to-day life, and I can only imagine the tasks she undertook as a domestic. As wealthy families and friends of the Fishers came and went, she was made to work silently through Philadelphia’s consolidation in 1854, numerous racially charged riots like the Lombard Street Riot of 1842 and Nativist Riots of 1844). Louisa also worked through the Civil War, the Industrial Revolution, and into the Gilded Age.

John Pierre Burr is well known to have used his barber shop in Society Hill as a stop on the Underground Railroad, and he quite possibly interacted with William Still and other agents. It is my view that Louisa’s work with the Pennsylvania Augustine Education Society served as his inspiration. 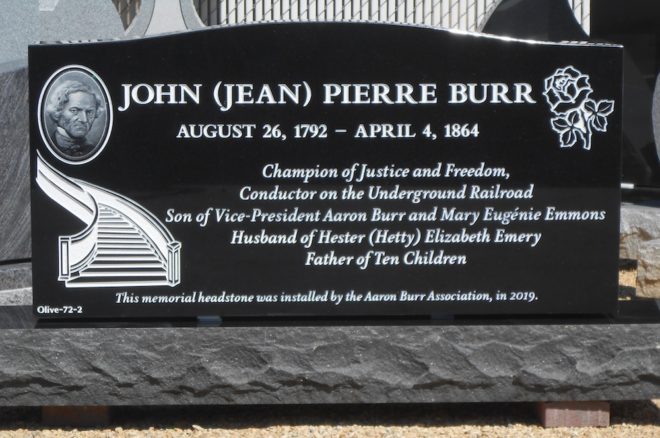 John Pierre Burr, born circa 1792, died April 4, 1864, was a Philadelphia abolitionist and natural son of Vice President Aaron Burr. A headstone dedication ceremony was held for Burr at Eden Cemetery on August 24, 2019. | Image courtesy of the Aaron Burr Association

Louisa married Francis Webb (1788–1829), who as an abolitionist, founded the organization whose primary goal was to work for the education of people of color. Together they held events at locations, such as Mother Bethel A.M.E. Church, to further their goals and to raise funds. Louisa supported her husband’s work as a distribution agent for the Freedom’s Journal, the first African American-owned newspaper in the United States, that raised even more needed revenue to assist in their long-term goals, one of which was the Haytien Emigration Society, where Louisa worked behind the scenes.

Louisa, with her husband, assisted African Americans who wished to leave the United States for Haiti to find a better life. Mind you this was during a period of high tension between the North and South. Her own family would leave for Ayiti (Haiti) in 1824 and, perhaps for her, it was also a way to connect with her own roots. Unfortunately, they returned two years later due to the difficulties that her family and many others found in living in an environment so dissimilar to city life.

A short time later, Louisa’s husband Francis Webb passed away, leaving her to raise their four children. She then returned to the Fisher household to hem clothing, take care of their children, and make their meals. It is impossible not to imagine that throughout Louisa’s life, the intersecting of taking care of the Fisher household, her own home, and being an abolitionist clashed and quite possibly caused friction. Yet she persevered for many more years and stayed on into her later years and eventually marrying once more (Darius). To the end of her life, she was always considered by the Fishers as a valued member of their household.

“My grandfather would tell us stories about us being related to Aaron Burr. It was not until the past five years that I learned that it was true,”said Anita Trotman, great-great-granddaughter of Aaron Burr.

To gain more insight into who Louisa was as an individual, I reached out to Mrs. Maillard and Trotman, a descendant of John Pierre and Louisa Burr. Mrs. Maillard learned of Louisa and her family through her own research project into African Americans who left Edenton, North Carolina during the Antebellum years and went North. One of those individuals was Annie Wood who was the granddaughter of a governor of North Carolina and the maternal aunt of abolitionist Charlotte Forten. She later married John G. Webb, one of the children of Louisa who would go on to form part of a high society circle in Society Hill.

Mrs. Maillard elaborated on her findings: “Like many women in the nineteenth century whose lives appear to be undocumented, Louisa Burr Webb’s contributions to equal rights are not invisible if one looks hard enough at the people whose lives she informed. What makes Louisa unique is not that she, her husband, and brother John Pierre Burr were abolitionist, but that she also worked for the Fisher family who were  Copperheads. The Fishers had intermarried with a South Carolina family (the Middletons) and, as ‘Copperheads’ living in Philadelphia, were southern sympathizers. Louisa Burr lived simultaneously, and apparently harmoniously, in both a pro-Confederate household and an abolitionist one. This double life gave her a rare ground-view perspective of the sectional crisis.” 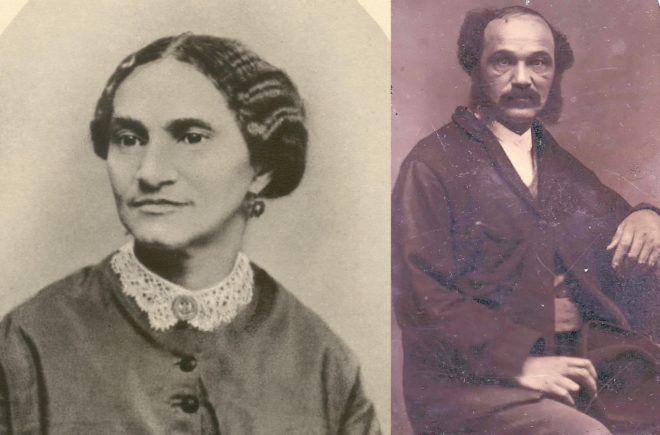 Trotman had a slightly different perspective after having been raised on stories of her lineage from her grandfather William, who was known to be a storyteller, but she later ignored these tales after learning more about Aaron Burr’s legacy.

It was only recently that she learned that the stories were indeed true by linking pieces together with other family members, including Sherri Burr, who is a descendant of John Pierre Burr.

“My grandfather would tell us stories about us being related to Aaron Burr. It was not until the past five years that I learned that it was true,” she said.

Trotman has focused on the woman Louisa might have been via the legacy she left behind. “She was a hardworking mother. She was limited in what she could do, but even as a single mother, she accomplished a lot. Widowed at 30 and left with four children, Louisa had to make her way. Had to make something work and did so and carried herself well. Each of her children were educated and she did the best for them and lived until her 90s,” said Trotman.

What astounded her the most was that she could trace her Philly roots back to the 1700s and that her family were smart, literate people. “Not only did they make significant accomplishments, but they helped other African Americans to accomplish the same,” Trotman said. “She sacrificed and worked dual lives to support her family yet has never been acknowledged.” 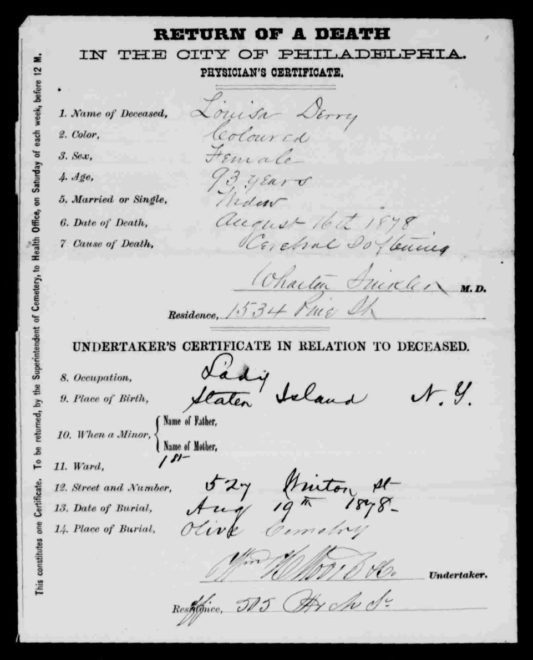 Louisa Burr’s death certificate. She was 93-years-old when she passed away. | Image courtesy of Mary Maillard

Recently, the Aaron Burr Association has been experiencing an influx of Burr descendants from Mary Eugenie’s side of the family tree and have come to learn more about their ancestors.

How much freedom did Louisa have in the Fisher household? I don’t have an answer to that question. She did what she did because Louisa was in the same position she was in since her teenage years. Did it cause friction between her and other people in her community? We really cannot say without speculating. I believe that we know Louisa because we know of the struggles of Black and Brown women today who tread the same path that she did.

How often do we learn of mothers sacrificing for their children and then being ignored? Louisa’s successes were her children. Her life is written in the works of her youngest child, Frank J. Webb, who wrote the early African American novel, The Garies and Their Friends, in 1857.

She survived in the memories of her family who told stories for generations. Yet her story has no true end. She was an abolitionist who put motherhood over her other pursuits. I hope that this article will bring greater awareness to her story so that one day Louisa Burr Webb Darius is given a proper headstone and a reburial at Eden Cemetery.