Bravery and Bad Deeds During the Yellow Fever Outbreak of 1793

Crises have a way of revealing unexpected heroes and villains. Before the coronavirus, who would have predicted CNN’s blustery and acerbic anchor Chris Cuomo to emerge after contracting the virus as a profile in courage? Conversely, who would have assumed that ordinary Americans would become toilet paper hoarders? During the yellow fever epidemic of 1793, two prominent Philadelphians behaved in ways that contradicted both their reputations at the time and their historical legacies. 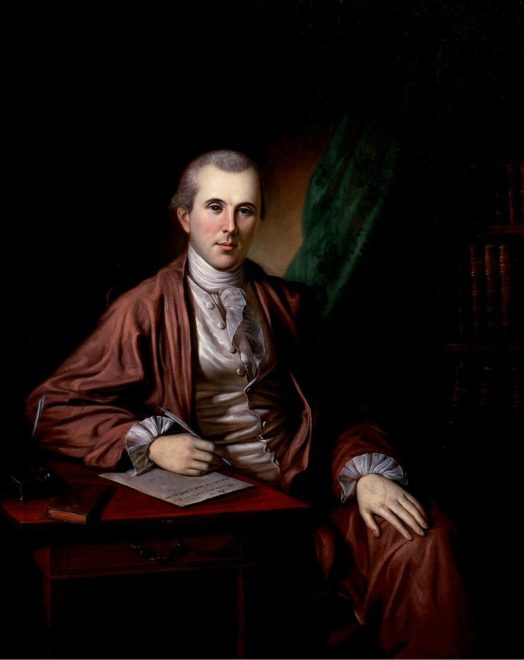 Portrait of Benjamin Rush in 1783 by Charles Willson Peale. | Image courtesy of the Winterthur Museum

In 1793, Benjamin Rush was a revered doctor, statesman, and reformer. He had studied at the University of Edinburgh, then the world’s premier medical training facility. He published the first American chemistry textbook and trained thousands of students at what became the University of Pennsylvania. He persuaded Thomas Paine to write Common Sense. He was a signer of the Declaration of Independence and a delegate at the Constitutional Convention. He was the surgeon general for the Continental Army. He was also a founder of the Pennsylvania Abolition Society, an advocate for free public education, a proponent of educational opportunities for women, and a pioneer in prison reform.

Benjamin Franklin, John Adams, and Thomas Jefferson were among Rush’s close friends. And, unlike others who opposed slavery, Rush developed genuine friendships with members of Philadelphia’s free black community.

During the yellow fever epidemic, however, Rush caused enormous physical suffering and hastened the deaths of untold numbers of afflicted Philadelphians. Rush was a practitioner of what was known as “heroic medicine.” His techniques included mercury-based enemas and emetics, wrapping feverish patients in blankets, and bloodletting. Under his direction, over a hundred patients a day were subjected to exhausting, painful, and often deadly regimens.

Four illustrations from 1819 showing the progress of yellow fever. | Image courtesy of the U.S. National Library of Medicine

After using these measures on himself and then recovering from yellow fever, Rush doubled down on his conviction that his approach was correct. When colleagues at the College of Physicians argued for gentler treatments, Rush stubbornly refused to listen and quit the organization he had helped to found.

Mistakenly believing that black people were immune to yellow fever, Rush enlisted the help of the leaders of the Free African Society, Richard Allen, and Absalom Jones. Seeing an opportunity to prove their community’s worth, Allen and Jones recruited scores of African Americans to nurse the ill and bury the dead. Despite Rush’s assurances, African Americans succumbed to the yellow fever at the same rate as whites. Once the epidemic had subsided, blacks were accused of stealing from patients and profiteering. An eloquent point-by-point refutation of these charges authored by Allen and Jones became the first copyrighted work by African Americans in the United States.

In spite of his dangerous, and some would say murderous, actions during the yellow fever epidemic, Rush’s reputation remains unsullied. In recognition of his forays into understanding mental illness, his profile is included in the seal of the American Psychiatric Association. Biographies of Rush have titles such as Benjamin Rush: Patriot and Physician, Benjamin Rush: The Common Good, and Dr. Benjamin Rush: The Founding Father Who Healed a Nation. A recent biography by Stephen Fried includes a quotation by John Adams: “I know of no character living or dead who has done more real good in America.” 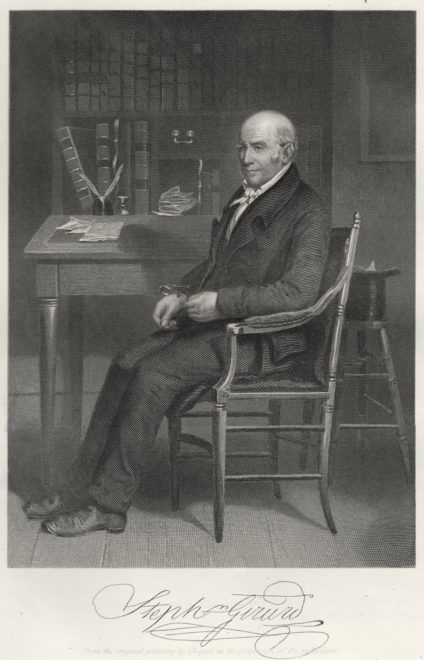 Benjamin Rush’s contemporary, Stephen Girard, experienced nearly the opposite trajectory. French-born Girard, who had lost sight in his right eye during childhood, was known as a hardworking and successful, albeit unscrupulous, businessman. He made his fortune in shipping through a combination of smuggling, bribery, and profiteering during the American Revolution. He sold opium to China. He owned plantations in Louisiana that relied on slave labor. He delayed payments to creditors and aggressively pursued debtors.

In 1776, Girard married Mary Lum. When she began to show signs of mental illness, he took a mistress. In 1790, he had Lum committed to a mental ward in Pennsylvania Hospital where she stayed–at times under the care of Benjamin Rush–until her death 30 years later. Girard continued to co-habitate with a series of women who served the dual purpose of mistress and unpaid domestic servant. The following alliterative sentence on the American Heritage website sums up his reputation: “Philadelphians knew Stephen Girard, mariner and merchant, to be a miser and a misanthrope.”

During the yellow fever outbreak, however, Girard was a total mensch. In spite of being one of Philadelphia’s wealthiest citizens, he did not flee the city in the summer of 1793 as did nearly all of his well-to-do peers. Mayor Matthew Clarkson was the only political authority figure left in town once both the state and federal governments abandoned the disease-ridden capital city. When Clarkson asked a handful of leading citizens remaining in Philadelphia to help out, Girard sprang into action. 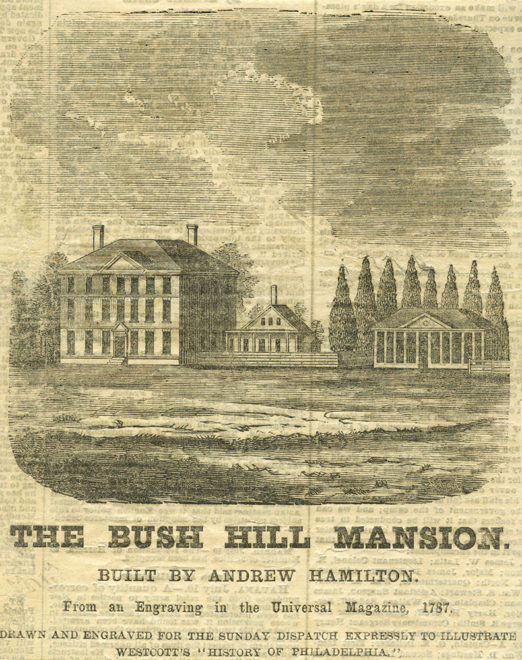 From and engraving in the Universal Magazine, 1787. Drawn and engraved for the Sunday Dispatch expressly to illustrate Westcott’s “History of Philadelphia”. | Image courtesy of Print and Picture Collection, Free Library of Philadelphia

A mansion in the Fairmount area, then far from the city center, had been appropriated to serve as a quarantine facility of last resort for people dying of yellow fever. Under Girard’s leadership, Bush Hill became a sanctuary for healing. The facility was sanitized and patients were made as comfortable as possible. One of Rush’s rivals, the French physician Jean Deveze, became the lead doctor at Bush Hill. Deveze described Rush’s aggressive approach as “a scourge more fatal to the human kind than the plague itself would be.”

Harsh techniques such as induced vomiting, diarrhea, sweating, and bloodletting were thus forbidden. Instead, patients were given rest, cooling baths, fresh air,and fluids to promote recovery. Deveze’s approach proved superior to that of Rush.

Girard was a constant presence at Bush Hill. Not only did he supervise other volunteers, he also comforted, fed, and even bathed the suffering patients. He helped to remove the bodies of those who perished and made sure they were given a proper burial. Girard’s fleet of carriages were used to carry the ill to the facility. Although Girard’s peers viewed his commitment to Bush Hill as a suicide mission, Girard wrote, “The deplorable situation to which fright and sickness have reduced the inhabitants of our city demands succor from those who do not fear death. This will occupy me for some time, and if I have the misfortune to succumb I will at least have the satisfaction of having performed a duty which we all owe to one another.”

In recounting Girard’s actions at Bush Hill, Dr. Deveze later recalled, “I even saw one of the diseased…[discharge] the contents of his stomach upon [him]. What did Girard do? He wiped the patient’s cloaths comforted [him]…arranged the bed, [and] inspired with courage, by renewing in him the hope that he should recover. … From him he went to another, that vomited offensive matter that would have disheartened any other than this wonderful man.” 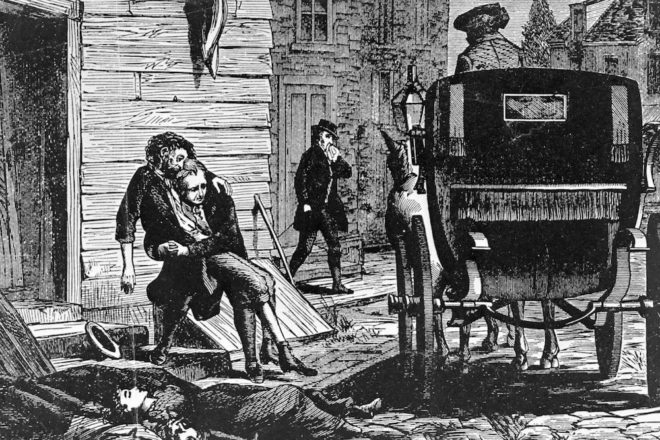 A woodcut from 1793 shows Stephen Girard taking a man infected with yellow fever to Bush Hill in his personal carriage. | Image: Public Domain

In the collective memory of Philadelphians, this chapter of Girard’s life is not widely known. Girard instead is remembered as the financier of the War of 1812, an accumulator of an enormous wealth, and, perhaps most notably, the benefactor of Girard College. Girard was sterile and had no heirs. He left most of his great fortune to municipal and charitable institutions in Philadelphia and New Orleans. But for many Philadelphians, Girard’s legacy is most closely associated with Girard College.

As stated explicitly in his will, Girard College was to be a boarding school for “poor, male, white orphans.” Set on a 43-acre campus and built according to Girard’s precise specifications–including a ten-foot wall encircling the campus–the school was opened in 1848. A century later, Girard College became the focus of a decades-long desegregation battle.

We cannot judge either Benjamin Rush or Stephen Girard based simply on their actions during one deadly summer and fall. Although Rush caused untold suffering and death by clinging to his harsh and unproven theories, he undoubtedly did much good during his lifetime. While Girard became a compassionate and hands-on caregiver during a time of peril, he was also an avaricious exploiter of women and African Americans.

But as we currently experience a similarly terrifying period, keep in mind that people can always surprise us. Some otherwise honorable people might hoard and profiteer. Conversely, normally self-centered individuals may have their finest moment. Let’s hope that Philadelphians today can take good care of each other in ways that will make future generations proud. We are, after all, the City of Brotherly Love.