Editor’s Note: A version of this story was published in the Spring 2020 issue of Extant, a publication of the Preservation Alliance for Greater Philadelphia.

The beauty of historic architecture lies not just in a building’s forms and spatial configurations, but also in material details. Artisans’ skilled hands have shaped and enriched Philadelphia’s built environment, from the simplest 18th century row houses, constructed of bricks hand-molded from excavated clay, to elegant interiors with ornamental plasterwork and hand-run cornices, to naturalistic Arts & Crafts-inspired elements like intricate metalwork, carved terra cotta, and handmade tiles, to Gothic Revival churches with their sturdy stone masonry and vivid stained glass, to 20th century custom neon signs and hand-painted advertisements that helped entice customers to local shops and businesses. And when it comes to preserving that characteristic architecture today, skilled trades and building craftspeople are absolutely necessary, though they are often the unsung heroes.

Traditionally, building arts and trades survived through knowledge, passed down generation to generation, with many of the crafts originating in Old World guilds or family businesses based in a particular regional vernacular. Artisans honed their skills in their homelands and brought their expertise to Philadelphia, spawning a panoply of  architectural possibility that is uniquely American. “We have these influxes in immigrant populations throughout Philadelphia’s history,” says Stephen Hartley, who heads the Building Arts program at Bryn Athyn College. “They each bring their own spin, from English timber framing, Irish plasterers, Italian stonemasons, to Quaker and Mennonite influences.” 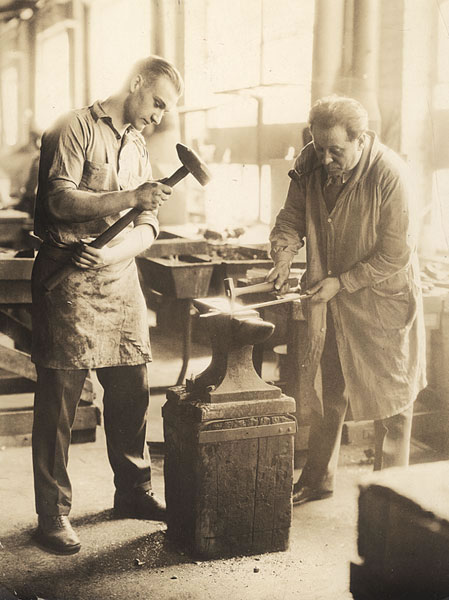 Famed Philadelphia iron worker Samuel Yellin, at right, with a striker on the floor of his forge in the 1920s. | Image courtesy of Samuel Yellin Metalworkers Co.

In Philadelphia, the building arts also have early institutional roots. The Philadelphia School of Design for Women (later known as Moore College of Art and Design) was established in 1848. The Centennial Exposition’s celebration of traditional crafts from around the world in 1876 inspired the founding of The Pennsylvania Museum School of Industrial art (later split to become the Philadelphia Museum of Art and the University of the Arts), where metalworker Samuel Yellin, among other legendary artisans, studied and later taught. Chestnut Hill-based Willet Studios, founded in 1898, and the slightly later D’Ascenzo studios, made Philadelphia a center for hand-painted and fabricated stained glass. Outside the city, the Arts and Crafts Movement, emphasizing the virtues of the hand-made, in buildings, ornamentation and everyday objects, over machine production, spurred utopian and craft-centered communities like Rose Valley, the Moravian Pottery & Tile Works, and art colonies, like those at New Hope and Chadds Ford.

Industrialization prevailed, and craft knowledge declined. By the mid-20th century, new construction techniques and technologies, such as pre-fabricated materials, revolutionized the building industry. Artisans with specialized skills became increasingly scarce, a trend with troubling implications for historic preservation. The shift was so pronounced that, in 1967, the National Trust assembled a Committee on Professional and Public Education for Historic Preservation and Restoration to address the “pressing need” for craftsmen skilled in historic building trades. 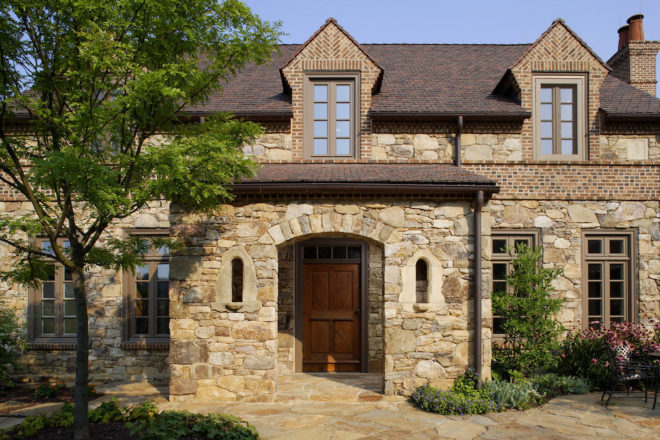 That need has not diminished. Fortunately, today there are many paths for those drawn to building crafts and trades to learn traditional methods–as well as paying work that depends on their skills.

The firm of John Milner Architects, for example, specializes in preservation and also new construction “inspired by classic American and European traditions,” projects that call for and have the budgets to support really high levels of craftsmanship. “You often hear people say ‘they don’t build buildings like they used to,’ but they do and they can,” says the firm’s senior project designer Justin Detwiler. “There are many talented craftspeople out there, especially in our region.” Even more are needed, especially to rehabilitate more ordinary historic structures, like simple brick row houses and other vernacular buildings. As Hartley points out, “most of our work is not on City Hall.”

“There is definitely a need for specialized skills,” says Casey Weisdock, director of industry development at the International Masonry Institute (IMI), “especially in the greater Philadelphia area where we have such a dense historic masonry building stock.” To fill that need, Weisdock organizes training programs for Union members that teach historic building skills. “There is a gap between your typical tradesperson and architectural conservator, and that’s the gap that we’re speaking to,” she explains. Courses, which typically last a week, introduce key elements of preservation theory, followed by three to four days of hands-on training in which participants learn how to assess the condition of historic masonry, hone specialized craft skills and repair techniques, such as matching historic mortars, sculptural patching, and stone carving.

Outside of the unions, more formal educational programs in the building arts are now offered regionally at Bryn Athyn College and Williamson College of the Trades, where students can earn an associate’s or bachelor’s degree in specific arts and trades. While many young people still don’t realize the crafts and trades are a viable career path, Hartley hopes that the Bryn Athyn program will attract students with previous work experience looking for more specialized skills. Those with on-the-job knowledge, he says, often excel in trade schools.

Art school is another viable path. Many of Philadelphia’s acclaimed specialists in architectural carpentry, plasterwork and stucco, blacksmithing, tile work, terracotta, and architectural glass, among others, discovered their trade on their way to a fine arts degree, and those fine hand skills, Weisdock says, really come in handy.

Warren Holzman of Holzman Iron Studio is one. “I migrated towards sculpture because I’d never really made anything in my life,” he says, as we walk through his shop in Fishtown, talking above the rhythmic whir of power hammers and low, focused roar of the forge. A lucky encounter with Dan Ravden, a well-known blacksmith from Peter’s Valley Forge, helped Holzman connect the dots from sculpture to metalworking. He went on to do a “crash course” in blacksmithing as Radven’s apprentice and was hooked.

Holzman opened his own shop in 1997 and today is the principal blacksmith for Bryn Athyn, which offers the unique opportunity to work with monel, an expensive, rarely used nickel alloy. Though commissions for new metalwork are more common than preservation projects, Holzman often finds himself in imitating or replicating historic craft and machining marks and methods—for example, matching 19th century machining marks on a replacement stretch of iron railing.

“As a nerd,” he says, “one of the fun parts of the job is figuring out what historical details matter in replications. You have to ask yourself, when is evidence of handmade important? When is it not important? When are you emulating something that’s machine-made even though you’re doing it by hand?”

Breaking Through the Plaster Ceiling 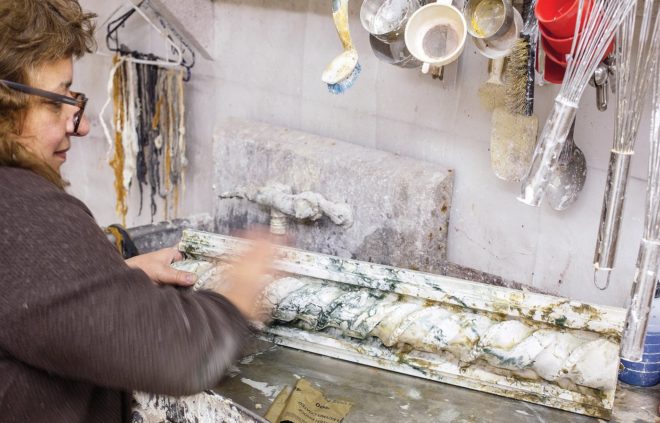 Kathleen Vissar wet sands a piece of black and gold-veined scagliola molding she’ll use as a sample for design firms in New York. | Photo: Peter Woodall

Like the larger construction industry, building arts and trades tend to be overwhelmingly male-dominated and white. Kathleen Vissar, who has been doing scagliola, an ancient technique that involves folding pigments into gypsum plaster and working it until it resembles marble or stone, since 1985, says “It was really, really hard to be a woman-owned business to compete with these guys and to get these jobs, and get our foot in the door.”

Vissar, who studied fine arts at Moore College of Art, was first introduced to “scag” when she and friend Amy Wells worked on a project with a company that had been commissioned to help with the redesign of the Benjamin Franklin State Dining Room in Washington, D.C. Few people specialize in the costly technique, popular in opulent interiors of the Gilded Age (including the demolished lobby of the Divine Lorraine).

“When you talk about fancy, fancy plasterwork, scagliola is like at the top,” Vissar says. More than restoration projects, Wells Vissar, the firm the duo founded in 1993, tends to focus on new commissions for high-end clients.

Vissar still runs the business out of her “Old World” shop at 4th and Girard. About working in the guy-culture of building trades, Vissar recalled, “I’m 61, and I’ve paid my dues. There are a lot of people that respect me now.” A renewed interest in scagliola among younger artisans has encouraged her too, and she is struck by their modern approach to designing with “scag.” She is eager to pass her niche skill on: “I have trained a bunch of people in Philly. For me that really feels good.” 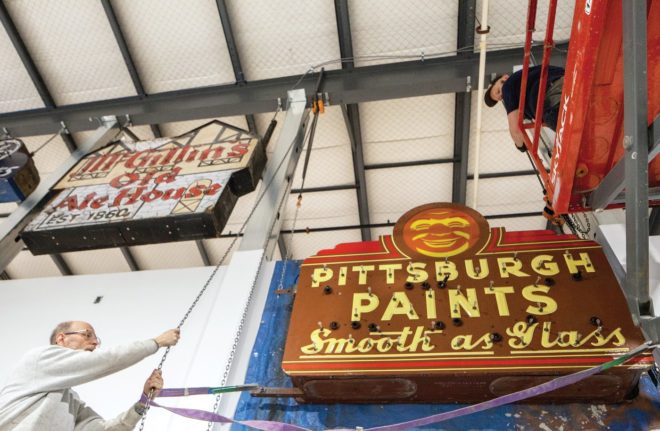 Philadelphia native Len Davidson became the city’s foremost neon sign restorer via a circuitous route.  As a sociologist at the University of Florida, Davidson developed a fascination with the vernacular signage and architecture of roadside America. Returning to his hometown, he became obsessed with documenting Philadelphia’s quirky and, back then, still abundant examples of neon, even tracking down the designers to record their stories.

“Neon is about cultural heritage,” Davidson says. To honor that heritage, which he realized would soon die out, Davidson apprenticed at a local shop and learned the trade. He became an expert in “reverse-engineering” old signs, an intuitive skill that involves discerning color choices and animation patterns based on limited physical evidence from the signs themselves and the occasional (often black and white) historic photograph. Over the past few decades, he’s restored some of the city’s most famous signs, such as the giant cowboy boot at Boot and Saddle on Broad Street, the iconic red and blue Reading Terminal Market sign, and many vendors’ signs in the Market’s interior.

And he has collected hundreds more, some of which are currently on display in the old Firestone tire shop at 32nd and Market. A permanent Neon Museum of Philadelphia–his longtime dream–is slated to open soon in Next Fab’s North Philadelphia building. There, he hopes not just to showcase a dazzling, ingenious American craft, but also to tell more stories of the tradespeople who made them.

Passionate about their chosen craft, skilled artisans like Davidson, Vissar, and Holzman approach their practice aware of the heritage they bear. Linked to the craftspeople, many anonymous, who came before them, they are motivated to keep the tradition alive. “It’s almost like a fire in them,” says Stephen Harley,“[they’re] saying, ‘I don’t want to be the last one.’” So, although these age-old traditions may feel precarious, craft knowledge lives on, carried into the future through today’s practitioners dedication and enthusiasm. As John Ruskin, the 19th century English art critic and early preservation and architectural theorist once said, “When love and skill work together, expect a masterpiece.”