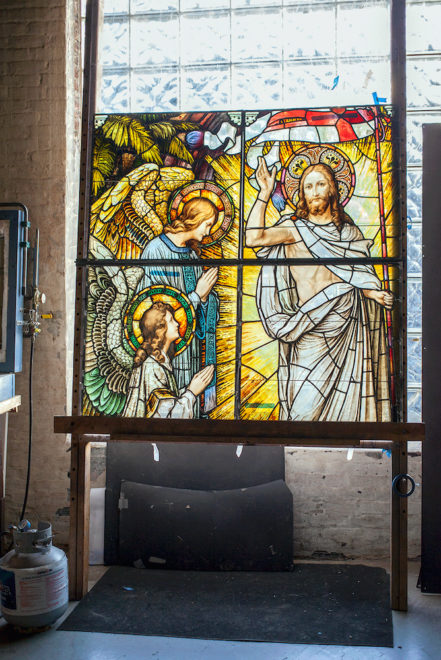 This stained glass window was made in Munich, Germany by Franz Xaver Zettler around 1910. It is being restored for Christendom College in Virginia. | Photo: Peter Woodall

The immigrant wave in the 19th and early 20th centuries brought an enormous number of Catholics to Philadelphia. It also brought about a boom in church construction, where it was not uncommon for one neighborhood to have multiple Catholic churches–a Polish church on one block, then a German church further down the street, and an Italian church beyond that.

Now, the decline of the church-going Catholic population in Philadelphia, along with changing neighborhood demographics, is visually represented on street corner after street corner, all over the city: once-stately church buildings shuttered and deteriorating, or for the more fortunate ones, repurposed into condors or a worship site for some other denomination.

What is not immediately apparent is the fate of all the holy ornamentation that graced those churches. Moveable items, like chalices, statues, candlesticks, and altars often make their way to other parishes. For over two decades, the Archdiocese of Philadelphia operated its Office for the Ecclesiastical Exchange, offering sacred objects from closed parishes to other Catholic institutions before turning it over to a commercial vendor of religious goods to manage.

But what about less portable features like stained glass windows, one of the defining elements of grand church architecture? “Stained glass to Roman Catholics, it makes them feel like this is a legitimate church,” said Joseph Beyer, stained glass artist and proprietor of Beyer Studio in Germantown.

Enter the Sacred Window Rescue Project, which Beyer initiated with area dioceses in the 1990s as an adjunct to his studio where he’d been producing new stained glass works for the previous 15 years or so. “We relocate old windows,” he said. “These various dioceses—the archdiocese of Philadelphia, the dioceses of Allentown and Camden, have been closing churches for quite some time. And they’re not done yet.”

Beyer recalled how the dioceses, though eager to find new homes for their growing backlog of windows, were reluctant to publicize their predicament by going online. “We told them, you need a website, we can’t publish a catalog and mail them all over the United States. They wouldn’t give us permission, but we went ahead and did it anyway. Now, we get calls from all over.” 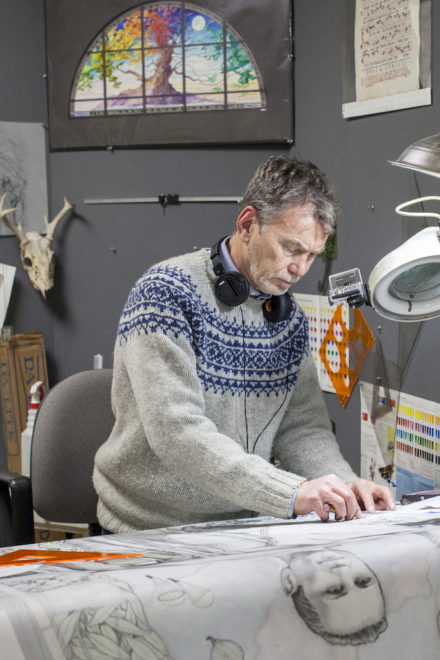 The project acts as a sort of matchmaker, allowing prospective buyers to view the available windows, which currently number around 600. “We don’t buy and sell the windows,” Beyer explained. “If we get the potential buyer all the information they need to decide that this is a good move for them, then we would put them in touch with whoever the owner of the window is. The actual transfer of ownership of the windows would be handled between those two parties. We don’t get a commission or fee for any of that.”

What they do get is a lot of work from it. With new commissions of stained glass windows costing in the area of $700 per square foot, acquiring a rescued window for around $200 per square foot would seem like an obvious bargain. However, the process will involve several other costs: beyond the safe removal of the window and installation in the new location, there could be restoration expenses or even a complete rebuilding, a highly specialized endeavor. “Once windows get to be a century old they need some care,” explained Beyer. “It’s expensive. Just like buildings need new roofs and the heating systems have to be replaced, the stained glass needs work. There’s not many people doing what we do.”

Who are the buyers for these old windows that are in need of a new home and a pricey restoration? Mostly, they come from areas where populations are growing: Sun Belt states and, in the Philadelphia region, the exurbs, where new parishes have been created and established parishes need to expand. When a new church building is planned, Beyer thinks parishioners envision embellishments like stained glass. “With modern construction methods, there’s not much that makes a church different from a bank or a shopping mall or an office tower,” he said. “So the stained glass takes on a significant role, because it makes them feel like, this is a church now.”

A large number of the rescued windows were made in Europe. Around the turn of the 20th century, Munich in particular was home to a number of the most famous stained glass studios. “The windows that were made in Munich at that time are really fine,” noted Beyer. “Their style is very painterly. Other styles are mostly bright colors that dazzle your eyes. With the Munich School, it’s like a painting that’s been done on glass.” This is in contrast to the more familiar technique of smaller pieces of colored glass held in a leaded framework, which dates back to medieval times and was later adapted by the American designer Louis Comfort Tiffany.

The painting is done with iron oxide, which is then fired in a kiln at about 1,200 degrees. “When fired, it fuses with the glass and sinks into the surface of the glass and is there forever,” explained Beyer. “It will never come off. That’s why you can still go to Europe and see cathedrals like Chartres that still have the painting on the windows.”

“There must have been a lot of really great artists in Munich who had been unemployed,” he continued. “Because the Franz Xaver Zettler studio ultimately had about 400 people and across the street, his uncle, the Franz Mayer Studio, had about 600 people, and then there were half a dozen other large studios, too. And the U.S. was the marketplace. In Europe, they already had enough churches, and didn’t need any more stained glass.”

Many Philadelphia churches had windows crafted by those Munich workshops, and today many are included in the Sacred Window Rescue Project. 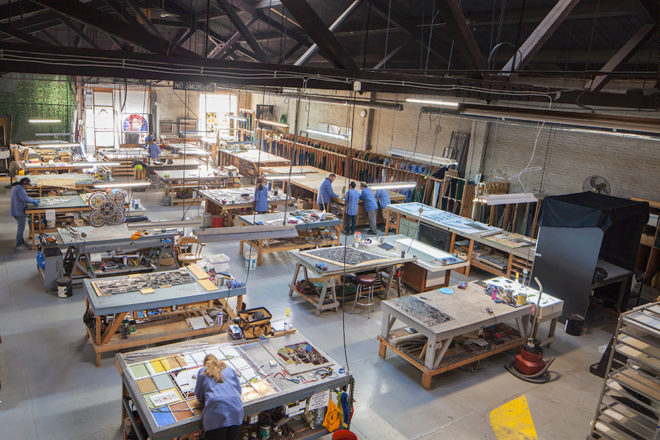 Sometimes they find new homes not too far away. “When St. Joseph’s in Downingtown erected a new building they bought nine windows that had been in the Most Blessed Sacrament Church in Southwest Philadelphia,” recalled Beyer. “It was a big place, it had gorgeous windows from Munich.” The windows were the work of George Boos, who began his career with Franz Mayer before founding his own studio in 1880.

Patrick Hildebrandt of the Philadelphia Church Project, upon seeing them at Most Blessed Sacrament in 2007, called them “perhaps the finest stained glass windows the Project has seen.” The following year, the Archdiocese closed the church, selling it and its school and rectory buildings in 2015 to private investors and sending the windows to the Sacred Windows Rescue Project.

St. Joseph’s purchased nine windows from the project, but needed 16. Beyer’s studio made the other seven, matching George Boos’s originals. “We have to mimic his style, use all German glass, that sort of thing, so that when you go down the aisle you can’t tell the old ones from the new ones,” he said. However, there is some room for individual creativity for Beyer’s artists. In this case, the new windows have borders that are a direct reproduction of the originals, but for the centers, they designed images that depict stories chosen by the church.

It takes a lot of research and a lot of time to develop the necessary skills for that level of craft. Beyer feels fortunate to have had both. “I give the painters enough time and space to get that good in painting that way,” he asserted. “It was important to me that we do things at the level they were done a century ago, without any compromising. Because people are always saying, ‘Oh stained glass, nobody does that anymore.’ Sure they do, we do! It was a big learning curve, but now we’re there. We’re completely there.”

On the research side, he credits Philadelphia’s many historical resources in aiding his work. “The Athenaeum of Philadelphia, the University of Pennsylvania, and other institutions have put their archival material online so you can search it on a website, which is really invaluable in terms of architecture and architectural history,” he noted. When his studio was restoring the windows of the Washington Memorial Chapel in Valley Forge, he turned to the Athenaeum, whose website contains the archives of the stained glass artist Nicola d’Ascenzo, who also created the windows in the Folger Shakespeare Library in Washington, D.C. and the “His Master’s Voice” dog in glass for the RCA building in Camden. 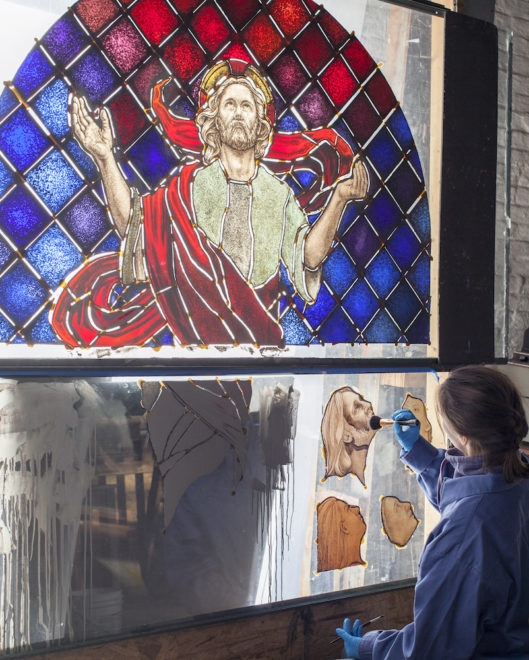 Sometimes the rescued windows travel further afield. The Ascension of Our Lord Church, at F and Westmoreland Streets in Kensington, was closed by the Archdiocese in 2012. The building, an example of Romanesque Revival architecture, had included dozens of stained glass windows created by Philadelphian Paula Himmelsbach Balano, the first woman in the U.S. to have her own full service stained glass studio, who had apprenticed with Nicola d’Ascenzo. Although their original home had been a large church, the new location of the windows, the Cathedral of the Holy Name of Jesus in Raleigh, North Carolina, was even larger, built to seat 2,000 worshippers, so Beyer’s studio was commissioned to create 50 more windows to accompany the rescued 40.

These new church buildings notwithstanding, the supply of windows offered in the project will continue to exceed demand. “There’s never going to be enough projects for all the windows that are in storage,” admitted Beyer. “We keep finding new homes for some, but it’s never going to catch up.”

The windows finding reuse tend to depict universal Catholic themes and stories. Many in the collection have a strike against them in this area, owing to their particular origins. “Many of them have decidedly ethnic origins in terms of subject matter,” Beyer pointed out. “There are saints that are popular today in the United States, but nobody’s asking us for saints that were popular generations ago among these ethnic parishes. Nobody’s asking us for St. Stanislaus windows.” He’s thought about reaching out to European parishes, in Poland and Lithuania, but the dioceses haven’t warmed to the idea.

It would seem like there would be other uses possible for these works of art. But, under Canon Law, objects that have been used in divine worship must continue in that use or be destroyed (Code of Canon Law, Part II, Title I #1171). “If it’s merely a decorative window, they’ll leave it behind, but if it has a religious subject matter, they’re obligated to take it,” said Beyer. “They’re constrained, because it’s not permitted, for say, a stained glass window depicting the resurrection to end up as a backdrop in a bar somewhere. They’re reeling under the expense of removing and then perpetually caring for these windows that are unlikely to ever find a new home.”

Still, Beyer holds out hope that a reinterpretation of the law could come someday, to allow private individuals to acquire them. “There ought to be a way that people can confirm their righteous intentions for these works of art. Because there’s just not enough churches being built to ever make use of all of them.”

“And in many cases, there are families out there whose relatives paid for these windows,” he continued. “I’ve gotten calls from people wanting them, saying I’m adding a chapel on to my house. And I have to tell them no, we’re not allowed to sell them to you.”