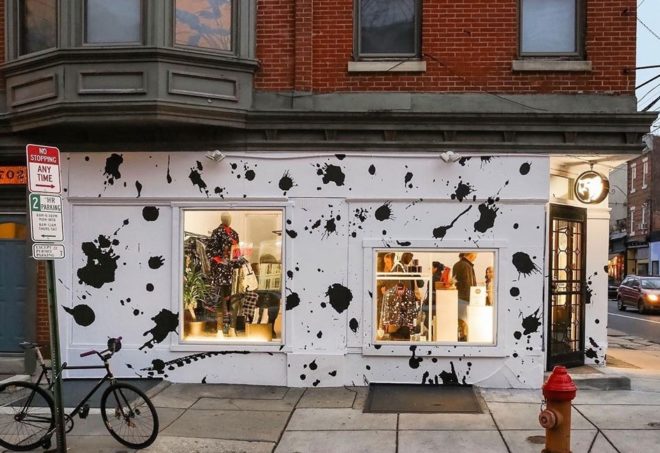 Splattered black paint on the white exterior of Lobo Mau at 6th and Bainbridge Streets is not as random as it appears. The Pollock-esque facade mimics the signature print of fashion designer Nicole Haddad who opened her South Philly clothing boutique on February 1.

“This is our first, independent retail location,” said Haddad who has been designing and selling her sustainable knitwear collection from her Bok studio, pop-up shops, and trunk shows since 2008. Made of soft fabric with eye-catching prints, the entire Lobo Mau collection feels like pajamas nice enough to wear on a night out in Center City or Paris.

It didn’t take an exhaustive real estate search for Haddad to pick 700 S. 6th Street. “The former tenant was Barrio Neal, designer jewelry by Anna Bario and Page Neal,” she said. “They are both customers of mine. When Anna came to my studio, I told her I loved her spot. She said, ‘You can have it. We’re moving.’” Barrio and Neal didn’t move far. They relocated to 524 S. 5th Street. 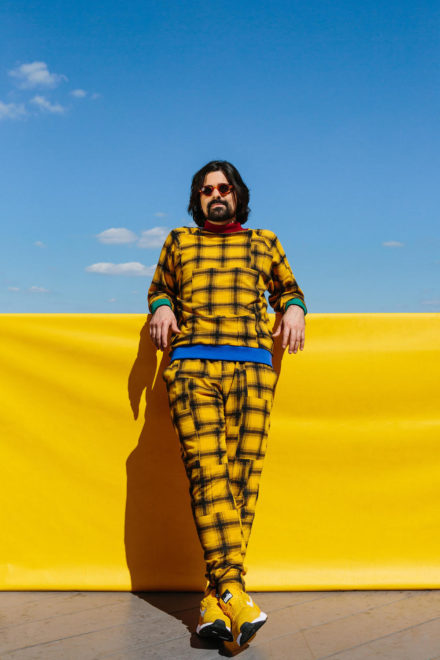 The earliest deed on the southwest corner property at 6th and Bainbridge dates back to 1875. It describes the structure as a three-story brick building in the heart of what would become a densely populated Jewish Quarter through the 1940s. These days, it is smack dab in the middle of a gentrification explosion. Upscale eateries are thriving, and just down the block at 5th and Bainbridge there is a new boutique hotel, the Philadelphia Queen, with roof-deck views.

Haddad and her business partner, brother Jordan Haddad, made the leap. They launched a Kickstarter campaign, hoping to raise $20,000 and exceed their goal. “We used those funds to work with ISA Architects. The exterior was a flat gray with iron bars on the windows to protect the jewelry shop,” she said. “We removed the bars, white washed the walls, and used our splatter design on the exterior and interior.”

Located within sight of popular eateries Beaumonde, Bistrot La Minette, and Bainbridge Street Barrel House, Lobo Mau has attracted a steady stream of customers since it opened. In addition to the Lobo Mau collection, the shop carries Paulo Redeem, a line of upcycled coats and jackets, handcrafted Feast jewelry, Sylven New York vegan boots, and Rewilder backpacks and totes fabricated from recalled Toyota airbags and upcycled beer filter cloth. What do all of these products have in common? They are good for the environment. 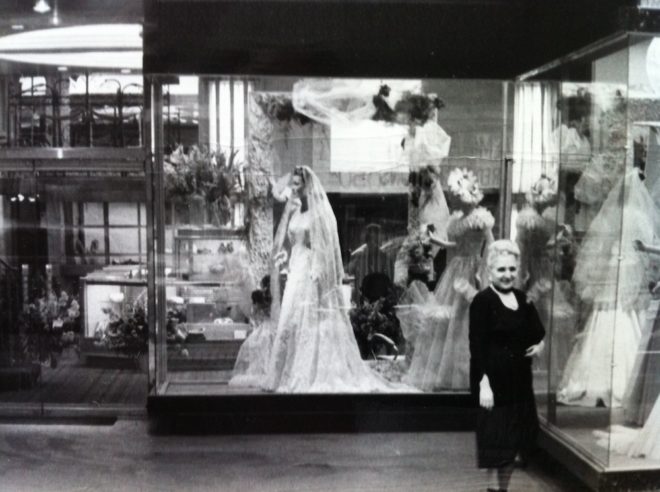 “We use leftover fabrics, print them in our studio, and all cutting and sewing is done at a Port Richmond factory,” said Haddad. “Everything is made right here in Philadelphia. It doesn’t have to travel far and uses less fossil fuel than clothing that is manufactured across the country or abroad.”

Haddad majored in art history and Italian in college and earned a masters degree in fashion design at Drexel University. Since graduating in 2008, she has taught textile design at Drexel. Some of her designs are influenced by vintage fashions passed down from her ancestors, but others reflect her visits to her Brazilian relatives. “I’m drawn to tropical colors and to the Brazilian “bata,” a tent-like, flowy garment favored on the beaches of Rio.

Jordan Haddad joined the company in 2016 and serves as director of printing and business. “I wanted to have a balance between handling the business and doing something with my hands,” he said. “Screen printing is a rewarding process, and you get that instant gratification to see your physical work turn into something beautiful that someone will wear one day. Right now I’m most excited about experimenting with 100% organic ink.” He looks forward to making the clothing company’s Bok headquarters available for artists who would like to utilize their printing facility. Conveniently, he is also the in-house fit model for Lobo Mau’s menswear.

The name Lobo Mau (“Bad Wolf” in Portuguese) gives a nod to the Haddad’s Brazilian heritage on their father’s side. Their parents, the Brazilian jazz duo Patricia King and Orlando Haddad, have been bringing a samba beat to Philly since they arrived here in 1984. To carry out the “bad wolf” theme, an oversized snarling wolf head logo appears on Lobo Mau sweatshirts and on the light fixture hanging over the shop’s entrance. But it is the Haddad’s maternal Italian ancestry that ties them to the world of fashion and current location. 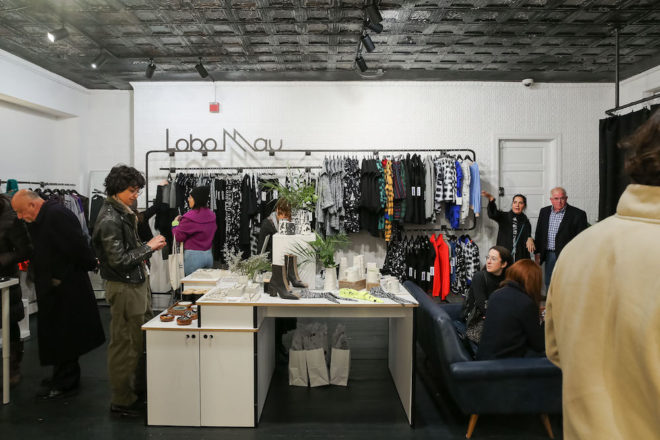 “When my great grandmother, Annunziata Minissale came here from Sicily in 1909 she used her dressmaking skills to start a bridal business,” said Haddad. “She eventually opened a large, upscale bridal salon on the 600 block of South Street and later opened the Trousseau Salon at 16th and Chestnut. Her customers included Grace Kelly.”

But that wasn’t the end of the story. Annunziata trained her brother Alfred in the art of bridal gown design with which he launched Alfred Angelo Bridal, a worldwide business founded in Philadelphia in 1940. Meanwhile, Haddad’s grandmother Carol Minissale King was also a designer who operated her own boutique in Carlisle, Pennsylvania.

Bringing their family history full circle, Nicole and Jordan Haddad have returned to the neighborhood where their ancestors got their start. Nonna Annunziata would be proud, even if she didn’t understand the splattered paint.