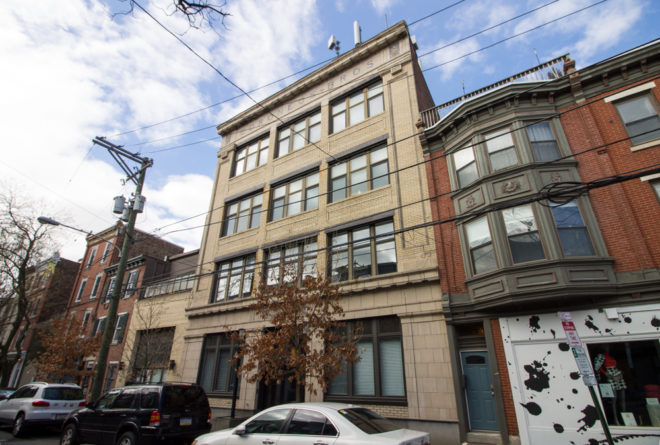 A former fashion model, real estate developer, and interior designer walk into a room. They are all Sandy Ward. Following a 13-year career with The Ford Modeling Agency and landing on the cover of Cosmopolitan, Ward returned to her native Philadelphia in 1980 and plunged into high-end restoration and interior design.

In 1981, Ward was looking for a unique space for her client, Thomas Baldwin, an accountant. She found it at the Coroneos Building, a 4-story Beaux Arts property at 704-710 S. 6th Street.  It’s the kind of building you walk past a zillion times without looking up and noticing the handsome terra cotta and brick facade with decorative enamel bearing the Coroneos name.  Inside, there was decades of rubble.

“This was a former bakery equipment and repair shop,” said Ward. “It had steel construction, heavy timber beamed ceilings, brick walls and yellow pine floors. The location was unusual for a warehouse. When it was built in the 1920s, Queen Village was purely residential and factories were located north of Market Street. So this was an anomaly.”

Deeds dating back to 1834 identify the property as originally being four separate three-story brick houses. George Coroneos, a Greek businessman, purchased them between 1912 and 1916 and demolished the homes to make way for a 10,000 square foot warehouse for his import and bakery equipment business which he ran with his brothers Horace and Peter. Max Bernardt was the architect. A graduate of Penn’s school of architecture, Bernardt served as architect for the Department of Banking in Pennsylvania. To see his designs, just follow the money to Western Saving Bank on the southeast corner of Broad and Chestnut or the fabulous wedding cake that is the Mutual Life/Victory building on the northwest corner of 10th and Chestnut. 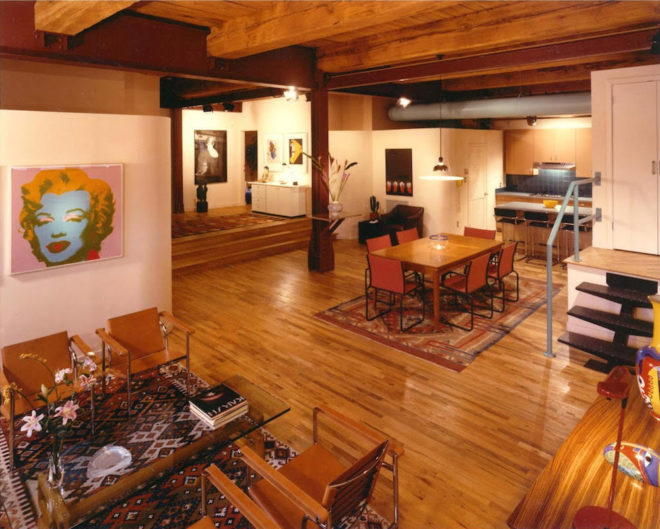 The Coroneos Brothers building came with an unlucky streak. In 1920, George, Peter, and Horace Coroneos were found to be in violation of the Food and Drug Act for mislabeling olive oil and were fined $100. That same year, one of the brothers fell from a steel rafter and died. The following year, George died, leaving just one brother with two widows.

“It had been boarded up for more than 20 years and was owned by a German investment company,” said Ward who purchased the property in partnership with Baldwin. “I retained the first and second floor. My ex-husband had his photo studio, Tony Ward Photography, on the first floor and I had my real estate development and design business on the first floor. Tom Baldwin had his accounting office in the adjacent building, a former garage, and lived on the third and fourth floor.”

To bring the vacant warehouse up to date Ward installed tavern-grade oak floors, Pella windows, and elevators. The former loading dock in the back of the warehouse was converted into parking for six cars, a greatly coveted amenity in South Philadelphia. But it is Ward’s interior design sensibilities that jump out when visitors enter the first floor which now serves as her office and home. Although it is no longer Tony Ward’s photography studio, his oversized images create an aura of excitement in the vast, open space with its gleaming wood floors, high ceilings, and minimalistic contemporary furniture.

“My years of working with top fashion designers in New York and Paris gave me a comprehensive education into every facet of color and design,” said Ward who designs interiors for Philadelphia’s luxury market. She isn’t afraid of the wrecking ball either. 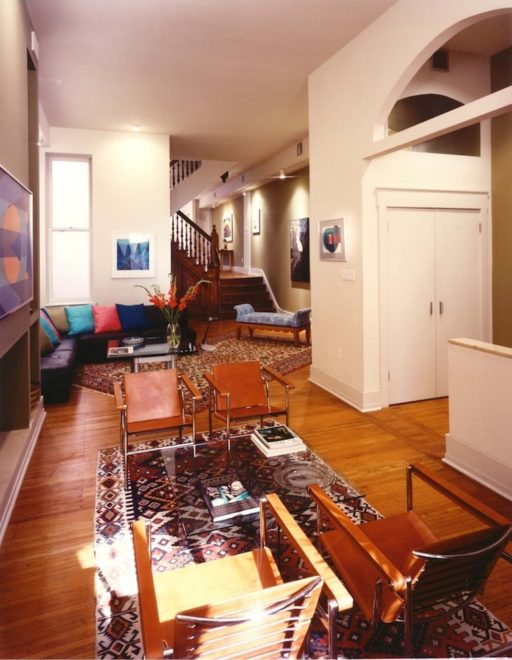 “I do total rehab which means demolishing the entire interior,” she said. Case in point: 538-40 Spruce Street. Two, three-story Colonial style houses which Ward converted into a single-family home. Located next to the historic Rebecca Gratz House, a former home for unwed Jewish mothers that is now a condominium complex, the dual property appears as pristine as when it was built in 1850 thanks to sandblasting decades off of the brickwork. But it’s the inside that bears Ward’s signature design.

Ward, who dubs herself “Queen Village’s pioneer of gentrification,” has designed interiors in Washington Square West and Rittenhouse Square and currently has her eyes on a mid-century property in Elkins Park. “I am a well-rounded designer and builder. I do everything from interiors to editing art books, set design, and staging.” Since 2010, Ward has partnered with Bradley Clayton to form Sandy Ward Design, a full service interior design resource. The headquarters her business on the first floor of Coroneos Building.