Bigotry in the Quaker City and the Burning of Pennsylvania Hall 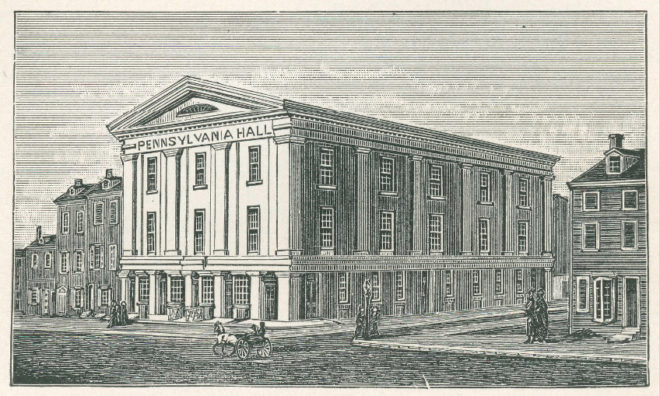 Illustration of Pennsylvania Hall from 1908. | Image courtesy of the Athenaeum of Philadelphia

As a Hidden City Daily reader, you are already well aware that Philadelphia has a penchant for demolishing historic buildings. Each year, we publish a list of the most significant buildings lost in the previous 12 months. Some were quirky and whimsical such as the Columbus Square Pavillion knocked down by the Department of Parks and Recreation in December 2019. Others were worn out, but represented significant memories for city residents like the Spectrum that was imploded in 2011. In honor of Women’s History Month, let’s take a look at a spectacular four-story colonnaded edifice that stood for less than a week before it was lost. In this case, however, the cause of the destruction was neither the wrecking ball nor large amounts of dynamite. It was a combination of racism, misogyny, and greed that doomed Pennsylvania Hall, a building that opened on May 14, 1838 and was irreparably destroyed three days later.

Being the Quaker City, our town was a hub of abolitionist organizing and a busy station on the Underground Railroad. The Pennsylvania Abolition Society, founded in 1775, is the oldest such organization in the country. The American Anti-Slavery Society was established here in 1833. When women were forbidden to join, they formed the Philadelphia Female Anti-Slavery Society, an interracial abolitionist group.

Less widely known about Philadelphia, however, is that our city was also a hotbed of pro-slavery sentiment. As the first big city north of the Mason-Dixon Line, Philadelphia had well-established social ties to the South. Our medical schools trained southern doctors. Philadelphia elites mixed with southern gentry in Cape May and other tony resorts.

Support for slavery grew throughout the 1830s. As the city industrialized, owners of textile mills grew rich by selling items manufactured with southern cotton. Members of the burgeoning Irish immigrant community feared that ending slavery would lead to competition for unskilled jobs. Indeed, anti-abolitionist feeling had become so strong in the city that by the early 1830s, abolitionist groups faced difficulty even finding places to meet. A coalition of these organizations decided that the best solution was to build their own venue. The Pennsylvania Hall Association raised $40,000 fairly quickly by selling shares at $20 a piece. The women of the Philadelphia Female Anti-Slavery Society were instrumental in this fundraising effort. 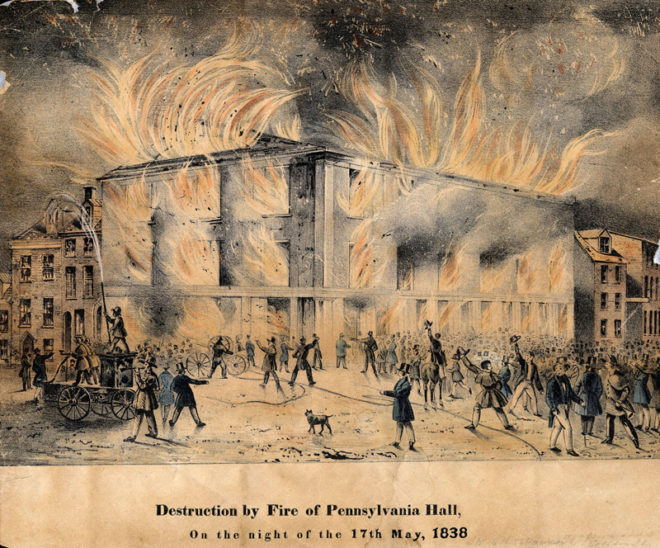 A painting by John Caspar Wild of Pennsylvania Hall engulfed in flames. | Image courtesy of The Library Company of Philadelphia

A late 19th century history of suffrage, written by Elizabeth Cady Stanton and Susan B. Anthony, describes Pennsylvania Hall as “One of the most commodious and splendid buildings in the city.” It had polished woodwork, tall glass windows, and all the modern amenities. According to Stanton and Anthony, the hall was “scientifically ventilated and brilliantly lighted with gas.” The first floor contained offices for abolition organizations and the Pennsylvania Freeman, an abolitionist newspaper. There were conference rooms, reading rooms filled with anti-slavery literature, a bookstore, and a shop selling “free” produce, the term for food items made without slave labor. The second floor had a lecture room with 300 seats.

The pièce-de-résistance was the Grand Saloon, a large room that could accommodate 3,000 people. Stanton and Anthony describe a platform with “superb chairs, sofas, and desks covered in blue silk damask; everything throughout the hall was artistic and complete.” Above the dais were the words “Virtue, Liberty, and Independence” in large gold letters.

In May of 1838, the second Anti-Slavery Convention of American Women was to be the newly finished building’s inaugural event. Abolitionists from throughout the Mid-Atlantic and New England regions gathered in Philadelphia. Adding to the excitement was the pre-convention wedding of two of the nation’s most prominent abolitionists, Theodore Weld and Angelina Grimké. Before a mixed-race group of friends and presided over by both a black and a white minister, the pair swore their devotion to each other using egalitarian language. Naturally, the wedding meal featured delectable fare made and served without slave labor.

Pennsylvania Hall’s debut did not escape the notice of the anti-abolitionists. The day after the convention got underway, posters appeared throughout the city stating, “Whereas a convention for the avowed purpose of effecting the immediate abolition of slavery in the Union is now in session in this city, it behooves all citizens, who entertain a proper respect for the right of property, and the preservation of the Constitution of the United States, to interfere, forcibly if they must, and prevent the violation of these pledges, heretofore held sacred. We would therefore propose to all persons, so disposed, to assemble at the Pennsylvania Hall on 6th Street, between Arch and Race, on to-morrow morning (Wednesday 16th of May) at 11 o’clock, and demand the immediate dispersion of said convention. Signed, Several Citizens.”

A crowd gathered as requested. They threw the odd rock or brick at the windows, jeered the abolitionists as they left the hall, and even beat up a few of the departing black male attendees. The overwhelmingly young, male crowd opposed not only the anti-slavery beliefs of the conventioneers. They were also galled by the spectacle of women speaking from a podium and, most of all, by “amalgamation,” the social mixing of blacks and whites.

By the convention’s third day, tensions built as the crowd around the hall grew larger and more aggressive. Speaking that evening was the nation’s best-known abolitionist, William Lloyd Garrison. He was followed by Maria W. Chapman of Massachusetts and Angelina Grimké Weld. Originally from Charleston, South Carolina, Angelina and her sister Sarah rejected their slave-owning family and had become famous as persuasive orators in the fight against slavery.

As Weld spoke, a steady barrage of rocks vibrated against the windows, and the volume of the crowd outside increased. The phrases “great noise” and “stones against the window” were repeated several times in the transcript of her fiery talk. Weld addressed the North’s complicity with the slave system and recounted her eyewitness observations of the lives of the enslaved. “What if the mob should now burst in upon us, break up our meeting, and commit violence against our persons? Would this be anything compared with what the slaves endure,” she asked the increasingly nervous audience.

Undeterred by the roiling crowd outside, Weld spoke for over an hour. As the audience departed from the hall, white women and black women walked arm in arm hoping that the proximity of the former would discourage violence against the latter.

The next morning the managers of Pennsylvania Hall met with Mayor John Swift seeking protection for the conventioneers. An accord was reached in which the managers agreed to cancel the speeches scheduled for that night and the mayor would address the increasingly volatile anti-abolitionist mob. Such trust did they put in Swift that they acceded to his request to turn over to him the keys to the building. Perhaps they should have realized that their trust was ill-placed when he admonished them that, “It is public opinion that makes mobs! And 99 out of a hundred with whom I converse are against you!” 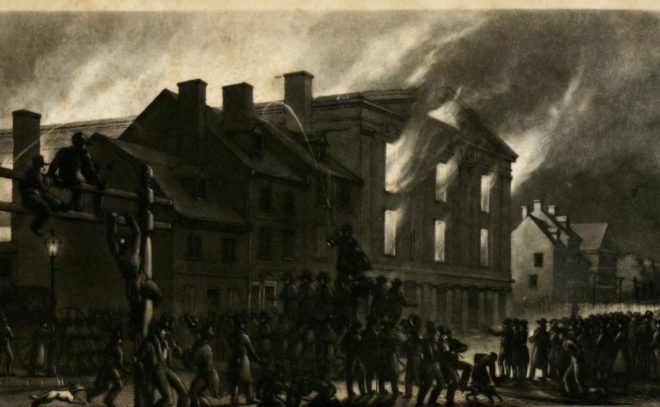 An engraving by John Sartain, an eyewitness to the fire at Pennsylvania Hall. | Image: Archive.org

In the evening, Swift walked from his office at the State House two blocks north to Pennsylvania Hall. After locking the building, he addressed the crowd: “The managers had the right to hold their meeting; but as good citizens they have, at my request, suspended their meeting for the evening. We never call out the military here! We do not need such measures. Indeed, I would, fellow citizens, look upon you as my police! …and I trust you will abide by the laws. And keep order. I now bid you farewell for the night!”

Thus with a large pack of rabid foxes left in charge of the brand new henhouse, Mayor Swift took his leave. Although the throngs that gathered the previous two nights had been comprised mostly of young members of the laboring class, the crowd this night was different. It included many men of means—merchants, professionals, and not a small number of southern slave owners.

Knowing that the mayor would turn a blind eye, the crowd became a mob intent on destruction. Battering rams were used to knock down the doors so recently locked by the mayor. Streetlamps were extinguished to obscure the illegal activity. Fires were set in the Grand Saloon. The reading room and bookstore provided effective kindling. By the time Mayor Swift was alerted to the chaos and returned with his police force in tow, they were vastly outnumbered.

In an odd foreshadowing of the 1985 MOVE bombing disaster nearly a century and a half later, the firemen on the scene turned their hoses away from the burning building, refusing to help extinguish the flames. Pennsylvania Hall, opened only days earlier, was ruined. The mob, encouraged by their “victory,” spent the next few days threatening and attacking black homes, churches, and even an orphanage. A few men suspected of being the Pennsylvania Hall arsonists were arrested and quickly released.

The police report on the incident put the blame firmly on the abolitionists themselves. It accused Pennsylvania Hall’s managers of “openly promulgating and advocating in it doctrines repulsive to the moral sense of a large majority of our community.” Elaborating on the nature of these morally repulsive doctrines, the report continues, “The mass of the community could ill brook the erection of an edifice in this city, for the encouragement of practices believed by many to be subversive to the established orders of society, and viewed by some as repugnant to that separation which it has pleased the great Author of nature to establish among the various races of man.” In other words, the abolitionists had violated God’s plan for racial segregation.

Undeterred by the violence of 1838, the Anti-Slavery Convention of American Women returned to Philadelphia in 1839, this time gathering in an old riding school. Mayor Swift asked that attendees avoid walking through the city in racially mixed groups. They did not honor his request.

During this year’s Women’s History Month, we should certainly be celebrating the 100th anniversary of the 19th Amendment giving women the right to vote. And it’s pretty cool that the honorary nickname of our city for the duration of 2020 is “the City of Sisterly Love.” But let’s make sure we also recognize the brave women of the abolition movement who saw their resplendent new building destroyed because they dared to fight against slavery, racism, and sexism.

For a reenactment and commentary on the burning of Pennsylvania Hall, see the clip below. The full 60 minute film, Sisters in Freedom, will be broadcast on WHYY, Tuesday, March 17 at 8PM. Video courtesy of Making History Productions.