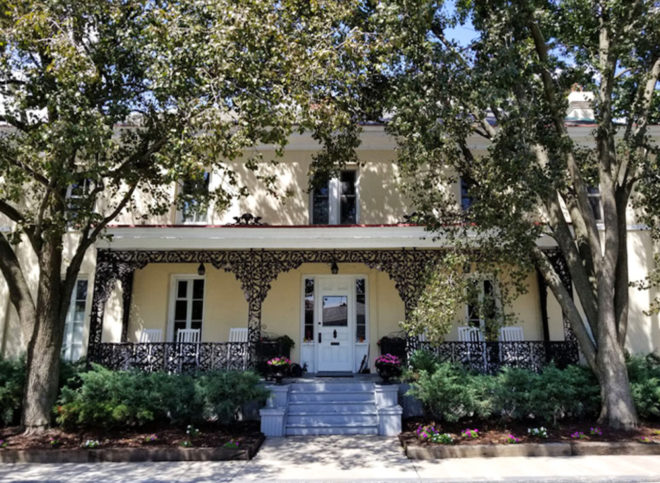 Most Philadelphians may have trouble locating Frankford Arsenal even with GPS. Until recently, the former Army munition plant, wedged between I-95 and the Delaware River, was little more than a sad remnant of what had once been a vibrant, bustling manufacturing hub. But in 2006, Cynthia Davis Buffington and David Szewczyk had no trouble recognizing the site’s potential for their business, The Philadelphia Rare Books & Manuscripts Company (PRB&M)

“When we first set foot on the Arsenal’s wide, grassy parade ground and saw this beautiful, gracious building at its southwest corner, we knew immediately that it had to be ours,” said Buffington who has co-owned PRB&M with Szewczyk since 1984. “We were attracted to the Arsenal for its wonderfully accessible location just off I-95, the significance and romance of its place in American history, and the amazing array of its extant historic structures.”

The Frankford Arsenal, established in 1816 and listed on the National Register of Historic Places in 1972, strongly complements PRB&M’s mission and their customers’ interest in history. The business specializes in history, early printed books, original manuscripts, U.S. and Latin America, travel, cooking, law, and religion–all of which look at home in the two-story, 5,000 square foot yellow house. Its gracious front porch trimmed in ornate cast iron calls to mind 19th century New Orleans.

“It was originally built in 1820 as a storehouse,” said Buffington. “Extensions were added to it and a conversion to officers’ living quarters took place starting around 1840 and completed by 1876.” Buffington believes that the decorative iron work was added during this period when the storehouse was converted into a home. “We found the pattern in an 1850s trade catalogue for the Philadelphia decorative iron firm Wood and Perot. Much of the iron work you see in the South was manufactured here and shipped down,” she said. “Philadelphia once had a lot more ornamental iron than it does now. The city lost most of it to patriotic war materiel collection drives during WWI and WWII.”

Buffington was attracted to the building’s “perfect proportions,” high ceilings, tall windows, curving staircase, wide window seats, and two fireplaces. Its most unusual feature is oak and cherry parquet floors in different patterns on the first and second story. “It is called a ‘wooden carpet’ and was popular in the 1870s,” said Buffington. This style of flooring was practical at a time when the parade ground was a muddy field. A traditional carpet wouldn’t have lasted long. 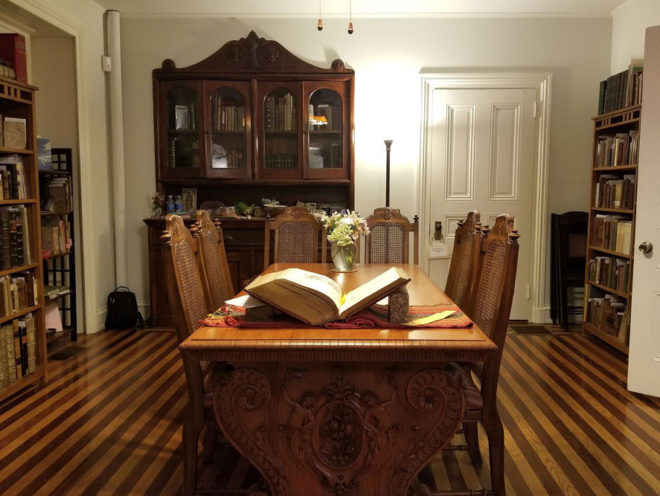 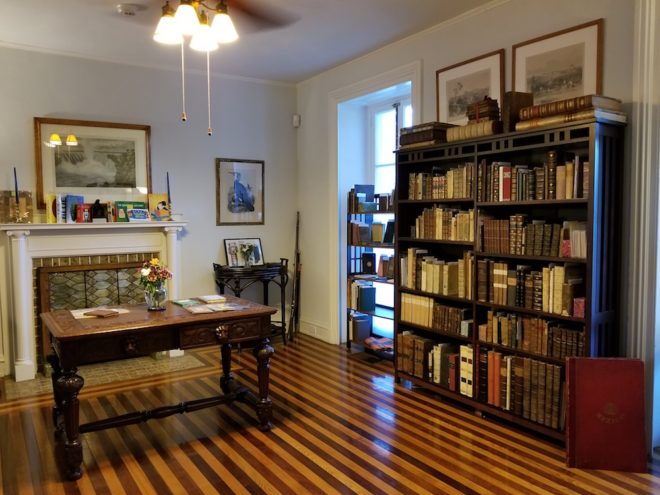 In spite of its external appeal, Buffington and her partner had to tackle ill-advised interior improvements and reverse previous abuses, including a mint green tile bathroom circa 1950.   “Just before us, it was a medical-testing reporting service which had customized the building for that use by cheaply laying in a warren of fluorescent-lit cubby areas and installing over 50 phone lines,” said Buffington. “After much demolition, we underwent a grand round of cleaning, painting, refinishing, and a lot of electrical work that notably included the installation of light fixtures and ceiling fans. We also installed a kitchen and HVAC.” None of these renovations deterred Buffington and Szewczyk who had previously worked out of the first floor of a duplex in Frankford.

The only hint that the current home of PRB&M was ever part of the munitions production campus is its 26-inch masonry walls built to withstand powerful explosions that come with the manufacturing of cannons and rockets. Which brings up another benefit. While their mailing address is 2375 Bridge Street, no one gets in or out without passing through the main gate. “Our insurance company appreciates the Arsenal’s security. We are, after all, in an old Army post with walls, fences, and guards at the entrances,” said Buffington.

When PRB&M first relocated to the Arsenal, the majority of its 37 buildings were still vacant. In 2018, Alliance Partners HSP acquired six of the larger factory buildings and restored them for commercial and light industrial tenants, renaming the campus Frankford Industrial Park. Call it what you will, but to neighborhood residents who live in its shadow the complex will always be the Arsenal. It’s closure in 1977 sent Frankford into a downward spiral from which it has yet to recover.

The Arsenal’s history is as thick as its walls. Dubbed the “Arsenal of Democracy,” it manufactured tens of thousands of muskets for the Civil War. It developed the Gatling gun, the precursor of the machine gun. At its peak in 1942, the Arsenal employed 22,000, including my aunt and uncle who commuted daily from South Philly. It was a city unto itself, containing its own police and fire departments, dining halls, motor pool, and medical facility.  During the Vietnam era, the Arsenal developed the rocket-powered ejection seat for aircraft and radar systems. 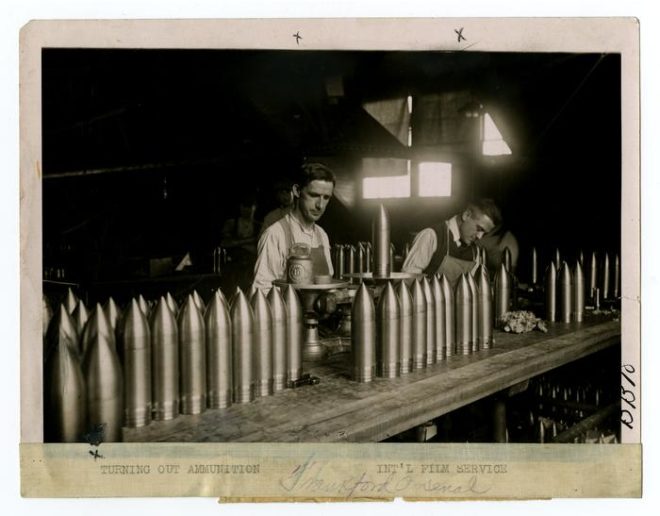 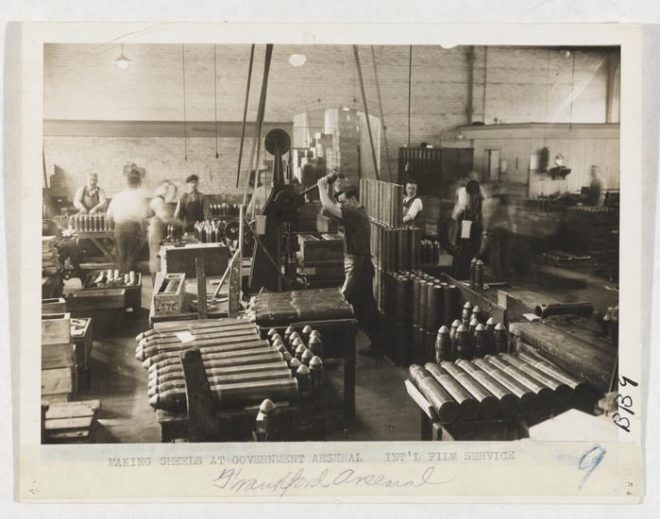 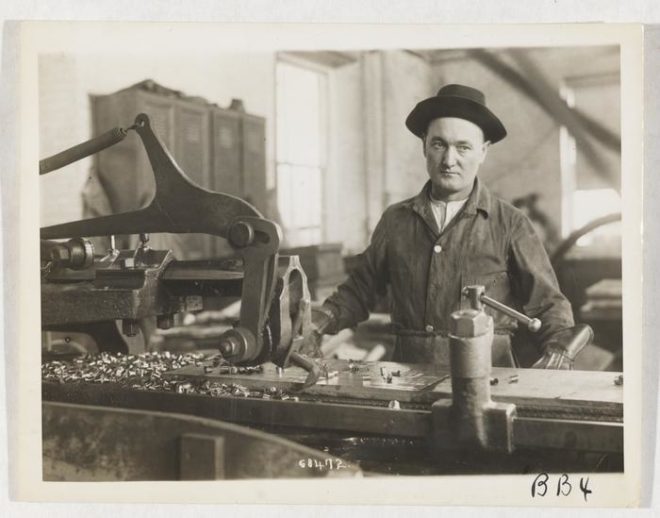 Photographs of ammunition workers in 1917 at Frankford Arsenal from the Philadelphia War Photograph Committee collection documenting World War I participation on the Philadelphia home front. | Images courtesy of Historical Society of Pennsylvania

By the 1970s, with Vietnam still raging, military spending reached new heights, opening facilities in other states with which the Frankford Arsenal could no longer compete. Like everything else tied to government spending, the ultimate decision was political. In 1976, Jimmy Carter ran on a pledge of keeping the Arsenal open, but after being elected he changed his mind.

If Alliance Partners HSP succeeds in reinvigorating the former Arsenal and brings jobs back to Frankford there will be reason for the community to rally. In the meantime, they are likely to take notice of the conversion of the Arsenal’s old main-gate guard house into an upscale café. “The guard house dates from 1864 and survives as a happy, handsome example of that era’s ‘Romantic Classical’ style,” said Buffington. “Fresh coffee and fresh energy will be lovely additions.”

Although PRB&M is a serious rare and antiquarian operation, it maintains an informal division known as SessaBks that offers used, affordable books. The division is named after the business’s dearly departed shop cat, Sessa. The rare books dealer often hosts informal open houses on Saturday afternoons and is open to collectors by appointment.