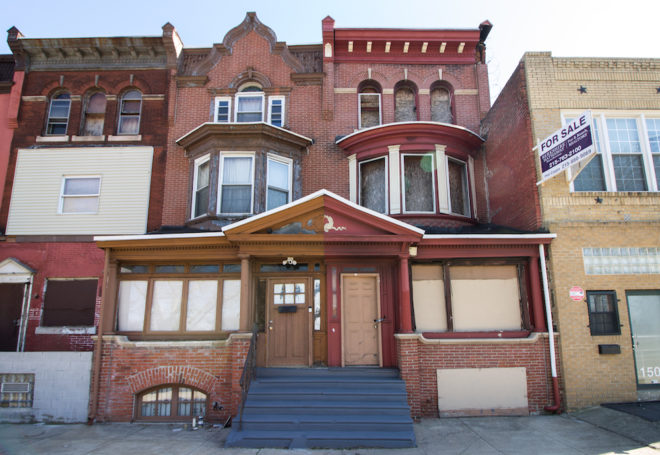 The John Coltrane House at 1511 North 33rd Street is listed on both the National Register and Philadelphia Register of Historic Places. Yet, the would-be museum and former home of one of the world’s greatest jazz musicians sits vacant and under threat of structural damage. | Photo: Michael Bixler

It is not surprising that the Delaware Valley has a wealth of historic African American sites. Philadelphia has always been one of the largest cities in the United States, and in the 18th and 19th centuries, with the region sharing a border with the former slave state of Maryland, it was a major destination for African Americans fleeing the oppressive South. The surprise, or rather disappointment, comes with the state of preservation and protection of those sites. Barely one percent of the Pennsylvania listings on the National Register of Historic Places are related to African American history.

Preservationists have been sounding the alarm for several of these sites for years. Most recently, Preservation Pennsylvania placed the John Coltrane House on its 2020 Pennsylvania at Risk list. The jazz giant bought the house at 1511 North 33rd Street in Strawberry Mansion in 1952. Coltrane lived here for six years where he further developed his unique sound and kicked his heroin addiction.

“Our Pennsylvania at Risk sites are nominated by the public,” noted Sabra Smith, communications director of Preservation Pennsylvania. “We consider that level of interest as an importance indicator–that there is support for a place and it is valued by the local community.”

The Coltrane House is a prime example of the limitations of historic designation. The landmark has received all of them—local, state, and national, beginning with the Philadelphia Register of Historic Places in 1985. The home received a Pennsylvania Historical and Museum Commission marker in 1990 and was declared both a National Historic Landmark and placed on the National Register of Historic Places in 1999.

Nevertheless, it has been a struggle for those concerned with saving and preserving the Coltrane House to take action. The idea of developing the property into a museum to Coltrane and a community asset has always been a closely-guarded solo effort, beginning with the saxophonist’s cousin Mary Alexander, who lived there with him and long after his death, to Norman Gadson, the jazz fan who bought the home from her, and then his wife Lenora Early who tried to realize his vision after Norman’s untimely death in 2007. “There’s been a long-standing resistance to working with others,” observed Faye Anderson, director of the public history project All That Philly Jazz. “They feel like folks are trying to take it from them.”

Gadson’s passing, followed by Early’s death several years later, left the title to the property in limbo, making it hard for interested organizations to get involved. Anderson is advocating for a grassroots public outcry. “We need to know the house’s condition. We’re calling on the mayor to order L&I to inspect the property,” she said. “Then, we’ll petition the National Park Service, which is responsible for monitoring the condition of National Historic Landmarks.” 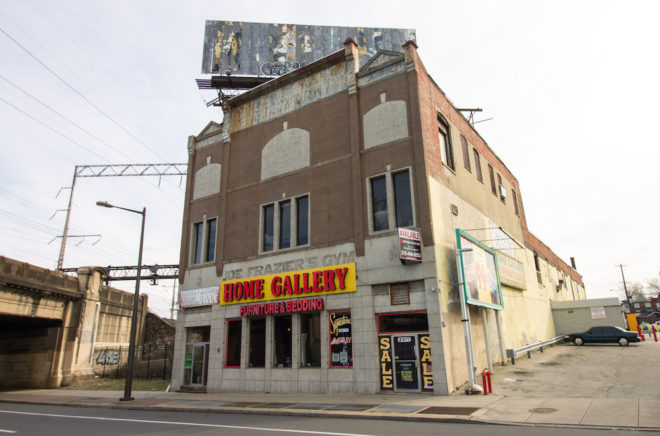 “Smokin’ Joe” Frazier’s former gym at Broad Street and Glenwood Avenue. The African American landmark’s future as an historic site and community asset hinges on an out-of-state owner who refuses to sell the building for less than $500,000 above the property’s assessed value. | Photo: Michael Bixler

Private ownership can limit the options for preservation organizations. In the case of the Coltrane House and another African American site, Joe Frazier’s Gym in North Philadelphia, the Preservation Alliance for Greater Philadelphia, along with other entities, managed to commission assessments of the properties’ potential: a 2013 program strategy for the Coltrane House and a feasibility study for Joe Frazier’s Gym published the following year.

One of boxing’s all-time greats, “Smokin’ Joe” Frazier opened his gym at 2917 North Broad Street in 1968. He lived and trained there for the remainder of his career, including his 1971 victory over Muhammed Ali in the “Fight of the Century,” the first time two undefeated boxers fought each other for the heavyweight title. After his retirement 1976, he continued to operate the gym as a sort of community center for over 30 years. Joe Frazier’s Gym closed in 2008 and the building was sold. A furniture store currently occupies the former ground-floor gym, but the upper floors are boarded up and unoccupied.

The Ian Smith Design Group conducted the 2013 feasibility study, which reviewed the physical characteristics, economy, and demographics of the neighborhood. It outlined possible scenarios to protect the building along with the two-fold purpose of honoring Joe Frazier’s legacy and providing a community asset. But the ideas proposed in the study remain just that, while the building is still privately owned. In fact, the attention seems to have made saving the gym even more unlikely. “Ironically, the historic designations awarded have led the owner to value the property for more than market conditions would indicate and far more than its assessed value,” noted the report, which went on to say a representative of the owner stated, “The owner rejected an offer for $640,000 in 2012 as he believes it is worth closer to $1 million.” The Philadelphia Office of Property Assessment currently lists the assessed value of the building as $544,500.

Challenges to preserving African American history certainly aren’t confined to Philadelphia proper. Abolition Hall in Plymouth Meeting in Whitemarsh Township, Montgomery County, appeared on Preservation Pennsylvania’s At-Risk list in 2017. An important stop on the Underground Railroad, Abolition Hall was built in 1856 by George Corson, a founder of the Plymouth Meeting Anti-Slavery Society, at the intersection of Germantown and Butler Pikes. The group had previously met in the Plymouth Friends Meetinghouse across the street, but following the suspicious burning of a church that had hosted abolitionist speakers, meetinghouse leaders denied further permission. Corson then built an addition to the carriage house attached to his property’s barn to create Abolition Hall, which could seat 200 people and hosted lectures by Frederick Douglass, Harriet Beecher Stowe, and Lucretia Mott. One rescue in particular, that of Jane Johnson and her two sons, was recounted in abolitionist William Still’s 1872 book, The Underground Railroad Records.

Corson’s house, barn, and Abolition Hall are contributing properties in the Plymouth Meeting Historic District, an area of 56 buildings spanning 200 acres that was added to the National Register of Historic Places in 1971. Today, Abolition Hall is threatened by a 2016 proposal to reroute Butler Pike between the house and barn to accommodate a development of 67 townhouses.

An activist group of residents, the Friends of Abolition Hall, have protested against the development. Their court appeal was dismissed, upon which they filed a petition with Commonwealth Court in December 2019 to overturn the lower court’s ruling. Earlier that month, the Township’s Planning Commission voted to recommend that the Board of Supervisors deny approval of the plan. The Township is currently awaiting receipt of revised plans from the developer. On February 12, the Friends of Abolition Hall and its co-appellants withdrew the appeal filed with Commonwealth Court, citing the costs of continuing the appellate process and a threat of litigation against them.

However, at other historic African American sites there are preservation efforts underway that appear to be more promising.

The National Trust for Historic Preservation included Azikiwe-Nkrumah Hall on the campus of Lincoln University in Chester County on its 2016 list of 11 most endangered historic places. It is the oldest building on the campus of the first degree-granting HCBU (Historically Black Colleges and Universities) and was named for two alumni, Dr. Nnamdi Azikiwe (’30), the first president of Nigeria, and Dr. Kwame Nkrumah (’39), the first president of Ghana. The university had plans to demolish the building to make way for a new welcome center. Now, renovations are underway to repurpose the building to house the university’s institutional advancement office, with a stated commitment to be sensitive to the historic nature of the 1865 building. 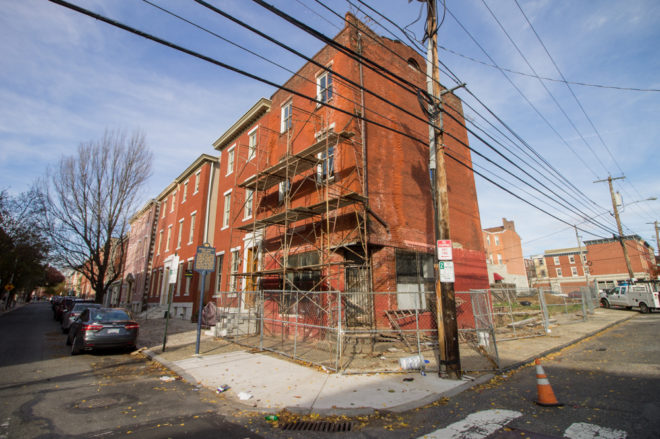 The Robert Purvis House at 1601 Mt. Vernon Street, built in 1859, was a stop on the Underground Railroad. The current owner acquired the building from his father who bought the building in 1970 and operated a dry cleaner on the bottom floor. The historic Fairmount home has fallen into dangerous dereliction in recent years. | Photo: Michael Bixler

A longer road to recovery awaits the Robert Purvis House in Fairmount. The corner property at 1601 Mount Vernon Street was the home of noted abolitionist and Underground Railroad participant Robert Purvis. After 20 years of neglect by an absentee owner, the building’s rear wall was deemed imminently dangerous, forcing the City to demolish that portion.

In 2018, the Spring Garden Community Development Corporation (SGCDC) stepped in and became the court-appointed conservator of the house, giving them the legal right to fund and undertake repairs while the property remains under its current ownership. So far, SGCDC has done significant work in shoring up the house, including rebuilding the rear wall, replacing the roof and repointing the brickwork. “Conservatorship allows us to fix the building so it’s not a danger to the neighborhood, but it’s not a restoration by any stretch of the imagination,” explained SGCDC board member Barbara Wolf. “There’s lots more to do to make it livable, but at least it’s standing.”

The SGCDC will be back in court at the end of March, at which time the judge will review the work that’s been done and consider whether the property can be put up for sale. If that happens, under the conservatorship law, the SGCDC could potentially recoup what it’s spent for the repairs, but they’d have to get in line behind the City looking for back taxes and penalties, and L&I receiving payment for the numerous fines it’s levied against the current owner.

At a time when the Archdiocese of Philadelphia is staggering under the weight of too many historic churches to support dwindling congregations, one such site might be getting a reprieve.  St. Peter Claver Church at 1210 Lombard Street was for generations the mother church for African American Catholics in Philadelphia. It was built in 1842 as the Fourth Presbyterian Church of Philadelphia, designed by Thomas Ustick Walter, the architect of Girard College’s Founder’s Hall and the fourth architect of the United States Capitol who was responsible for adding the Senate and House wings and the central dome.

St. Peter Claver Parish was founded on Lombard Street 1886. Subsequent alterations and the rectory building were designed by Edwin Forrest Durang in 1895. Philadelphia is full of the famed architect’s work, including Roman Catholic High School for Boys, St. Laurentius in Fishtown, and the Trocadero Theater.

The parish was officially closed in 1985. For a time, the rectory was used by the Archdiocese’s Office for Black Catholics as the St. Peter Claver Center for Evangelization. The Women of Hope program administered by Catholic Social Services continues to occupy the former school building. Last year, then-Archbishop Charles J. Chaput issued a canonical decree in March, relegating St. Peter Claver Church to “profane, but not for sordid use” effective April 8, 2019, meaning it would no longer be a Roman Catholic worship site.

However, last May, the Archbishop issued another canonical decree, withdrawing the planned relegation. In it he acknowledged the importance of the church and stated, “Additional efforts need to be made to ascertain if it is in fact possible to preserve Saint Peter Claver Church as a place of Divine Worship.” Kenneth Gavin, the Archdiocese’s chief communications officer, added, “The Archdiocese of Philadelphia has not made any announcements regarding marketing the property.”