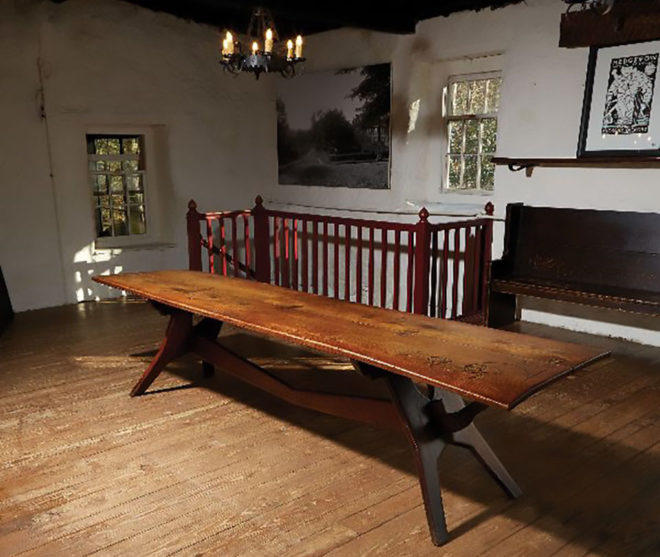 This table made by Wharton Esherick will be auctioned off to the highest bidder to support funding for Hedgegrow Theatre. | Image courtesy of Freeman’s Auction

Hedgerow Theatre, America’s first resident repertory theater, has hit upon hard times. Founded in 1923 in Rose Valley, Pennsylvania, the organization was championed by legendary furniture maker and sculptor Wharton Esherick. On March 31, looking for a quick fix, the theater’s board will sell off its inheritance of exemplary Esherick furniture. The orphaned pieces are now sitting in the queue at Freeman’s auction houses in Wayne and at 2400 Market Street in Philadelphia. Eight handcrafted, hammer handle wood chairs and three tables with Esherick’s charming trademark incised into vintage, burnished surfaces will go to the highest bidder. The right buyer may also walk into the venerated theater with a crow bar and cart off an original, built-in Esherick staircase.

Jared Reed, producing artistic director of Hedgerow, acknowledges the value and historical importance of the pieces, but is decidedly unsentimental, unlinking the furniture’s fate from the history and promise of the theater itself. In his view, the furniture has become a liability, an encumbrance sustaining damage from theater goers and taking up valuable programming space. “We are not the proper curators of the pieces,” said Reed. The sale of the furniture may yield funding for much-needed roof repairs and the establishment of an endowment to help secure the theater’s future. Reed, also an actor, is a 5th generation member of a family associated with Hedgerow since 1962.

The theater is housed in the historic Guild Hall building, a 19th century bobbin mill converted into a community center for Rose Valley in 1901 with artist studios and an acting stage designed by architect William Lightfoot Price. Hedgerow took over the building in the 1920s and will celebrate 100 years in 2023. Esherick and his daughter were actively involved in the theater and one of the tables was either donated or bartered by the artist for his children’s acting lessons.

Ryan Berley, curator of the new Rose Valley Museum at Thunderbird Lodge, is spearheading a last-ditch effort to purchase the auction pieces. “Our plan, if we are successful in securing some of the Esherick works, is to create a dedicated gallery devoted to Wharton Esherick and his legacy in Rose Valley,” said Berley. “It will be in the garret of the Thunderbird Museum, a wonderful space at the top of the spiral stair.” 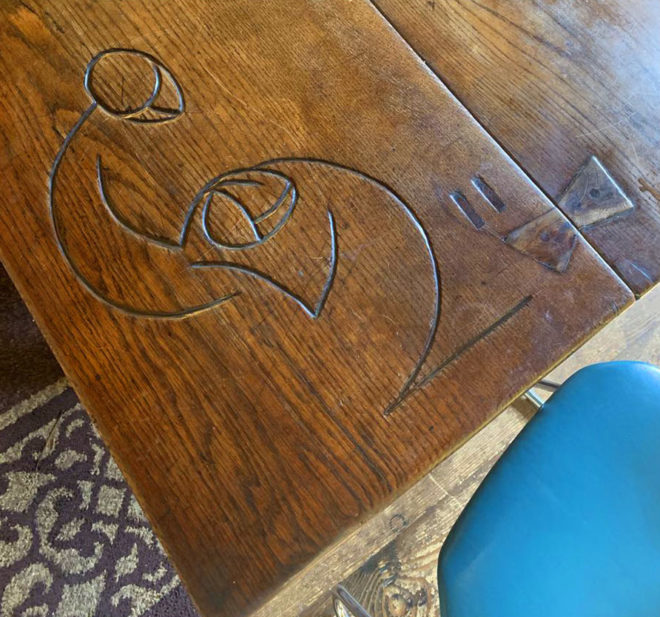 Wharton Esherick’s trademark etched into one of his tables. | Photo: Ryan Berley

While Reed contends that the furniture was “never intended for the space it was in,” Berley begs to differ. “From everything I’ve read, the Thunder Table was created in 1929 for the Green Room. The staircase was certainly intended for it’s spot when it was built in the mid-1930s to accommodate for a box office expansion.” Berley continued, “The large sawbuck picnic table was created as a dining table for Hedgerow actors, where it has sat on the porch of Hedgerow House, where actors have lived and practiced for many years since the table and chairs were made by Esherick.”

Esherick was a prominent figure of the American Studio Crafts Movement and is the vital link between the Arts & Crafts period and the Modern furniture movement. Esherick was influenced by Rose Valley, and his earliest furniture speaks to that Gothic aesthetic. He visited Thunderbird Lodge and modeled his studio off of the barn concept with tower. His spiral staircases also have much in common with Thunderbird Lodge.

Reed is excited that Berley is banding together with others to raise funds and attend the auction, but said he “can’t offer them a hometown discount.” The highest bidder is the board of Hedgerow’s highest priority.

The Philadelphia Museum of Art exhibits an extraordinary, monumental wood fireplace surround carved by Wharton Esherick. Lacking architectural context, it is a sad bit of salvage devoid of the spatial scale that inspired its original design, although its presence does give the public access to a piece that would otherwise have been demolished along with the Curtis and Nellie Lee Bok House it was originally part of. 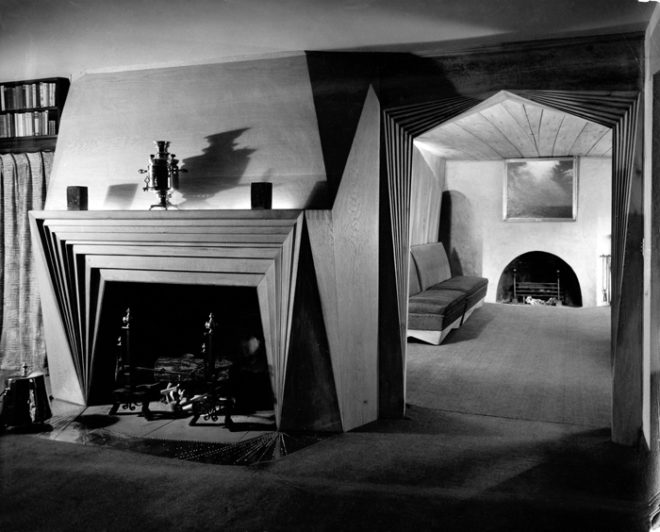 This photograph from 1938 shows the wood fireplace carved by Wharton Esherick at the Curtis and Nellie Lee Bok House in Gulph Mills, Pennsylvania. The home has since been demolished. The fireplace is on view at the Philadelphia Museum of Art. | Image courtesy of Rare Book and Manuscript Library, University of Pennsylvania

It seems clear to all parties, including Berley, that anchoring the Esherick pieces to the physical space of the theater is no longer practical. Detaching the artist’s furniture from the historical moorings of Esherick’s own involvement in the theater and region, however, will render the furniture pieces into a scattered butterfly collection. The hand-carved items become beautiful remnants of a species. No longer accessible to the public, unless the furniture finds its way to a museum, the objects’ legacy will be drastically reduced. Rose Valley faces the loss of these touchstones to the soul of its landmark buildings and historic sites.

Freeman’s recent press release highlights the import of this loss of a furniture collection representing “decades of creative exchange between the master woodworker and the Theatre… Esherick’s lengthy and seminal relationship with the Theatre… it’s considerable influence on his evolution as an artist and craftsman.”

Tim Andreadis is department head of 20th century design at Freeman’s, America’s oldest auction house that dates back to 1805. He consulted with Hedgerow in their decision-making process and takes a nuanced, big picture view. He understands that there is a considerable amount of emotion connected to the pending sale. “Hedgerow had an indelible influence on Esherick’s development as an artist,” said Andreadis, “These are not easy questions. There is a tendency to see a good and bad side. But there is something lost, something gained.”

Andreadis described Esherick, who could be seen up in the balcony sketching performances, as someone involved in all aspects of the theater, including costume, lighting, and set design. “Esherick’s legacy has a way of overshadowing the theater’s own legacy. Hedgerow was never meant to be a museum,” he said. 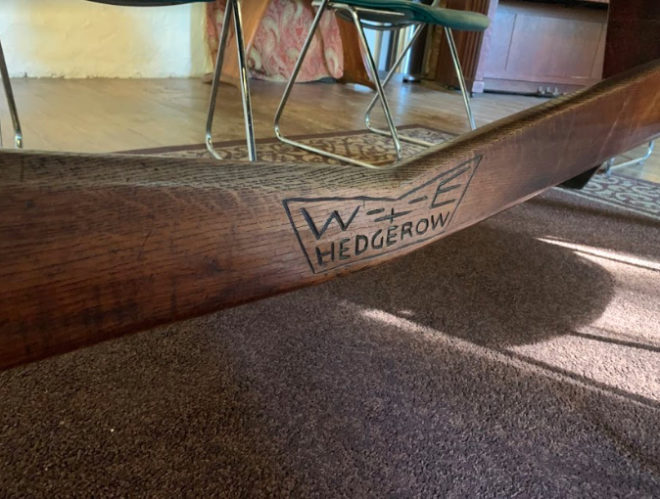 This table was built by Wharton Esherick specifically for Hedgegrow Theatre as payment for his children’s acting lessons. | Photo: Ryan Berley

Andreadis said that there is a lot of local and institutional interest in the auction pieces. Although the auction is open to the public and available by phone and web portal, he commented, “I doubt they will end up with a billionaire in Hong Kong.” His role at Freeman’s is to support the fiduciary responsibility of the theater board. The chairs, for example, may have been priced at around $380 each in Esherick’s time, but may now command up to $7,000 each at auction.

It is hard to argue with the Hedgerow board’s obligation to be fiscally responsible to the operation of its renowned theater. Yet, why not take a deep breath and work out a sale of the antiques to a group willing to pay the price, one that is dedicated to keeping the Esherick furniture holdings near Rose Valley? “If the community can come together to support the theater with the sale that would be wonderful, a win/win,” said Andreadis.

Hedgerow, however, is banking on a sky’s-the-limit auction market to bring in top dollar returns rather than negotiate with a single, committed party like Thunderbird Lodge. If Berley and other local buyers come up empty handed after the auction, the board of Hedgerow will have saved its theater, for a time. But it will also have closed the curtain on a uniquely tangible expression of the communal spirit that drove their own historic theater enterprise in Rose Valley.