Broadcasting Landmark in West Philly Keeps Rocking Around the Clock 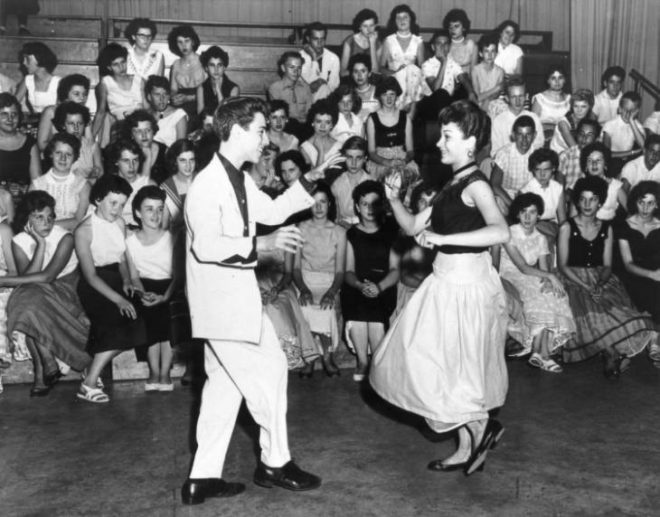 Philadelphia turned youth culture on its head when WFIL-TV debuted Bandstand in 1952. Pictured are high schoolers during a taping of the show in June 1955. | Image courtesy of Temple University Libraries, Special Collections Research Center

For those too young to remember the original Bandstand television show from the 1950s, let me explain. No self-respecting teenager could have gotten through puberty without it. It taught us how to rock, bop, and slow dance, even if our only partner was a kitchen chair.

From Bandstand’s start in 1952, high school children lined up every weekday afternoon at WFIL-TV studio at 4548 Market Street. Many came directly from nearby West Catholic High in parochial uniforms. Television was in its infancy, and appearing on American Bandstand was as exciting as a moon shot.

WFIL was built by Walter Annenberg’s Triangle Publications and was the first TV studio in the nation constructed for the purpose of television broadcasting, as opposed to adapting a preexisting structure. It was built in two stages. The original building, designed by Abraham Levy and completed in 1948, has a Streamline Modern facade. The western part, added in 1952, included the 3,100-square-foot Studio B where Bandstand was produced. Adjacent to the east wall of the TV studio was the Philadelphia Arena, the city’s premiere sports stadium, built in 1920 and purchased by Walter Annenberg in 1947. The media mogul ingeniously snaked television cables from the Philadelphia Arena straight into the WFIL studio so sporting events could be televised. 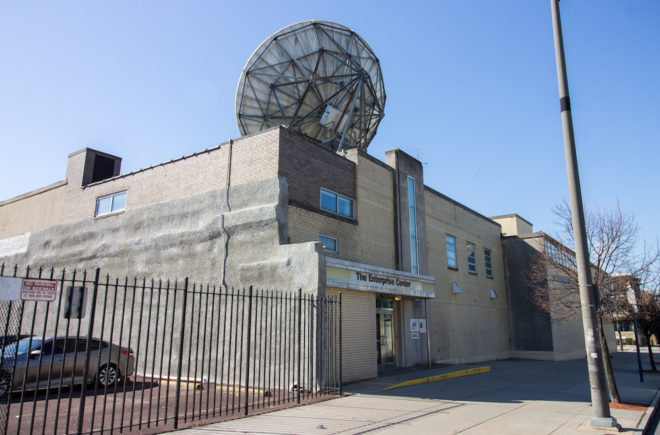 WFIL-TV studio at 4548 Market Street, the birthplace of Bandstand, has been home to The Enterprise Center since the 1990s. | Photo: Michael Bixler

When the local teen dance program went national on ABC in 1957 it was rebranded American Bandstand. By then, the show’s original host, Bob Horn, had been replaced by the younger, cleaner cut Dick Clark. Horn’s predilection for underage girls, payola (kickbacks for playing records), and drunk driving didn’t convey the family values the network was seeking.

American Bandstand production moved to Los Angeles in 1963, but Annenberg didn’t downsize. He expanded, building one of the most advanced broadcast centers in the nation on City Avenue, now known as WPVI. Meanwhile, the fledgling WHYY moved into the former WFIL Studio. In 1979, when WHYY relocated to Independence Mall, the historic TV studio was left vacant in the dark shadow of the Market Street EL. The adjacent Philadelphia Arena was doomed by the building of the Spectrum in 1967 and was destroyed by arson in 1983.

The abandoned TV studio was saved from the wrecking ball in 1986 when it was put on the National Register of Historic Places. However, it remained empty until 1994 when it caught the eye of Della Clark, executive director of The Enterprise Center (TEC). Clark saw past the graffiti covered exterior. 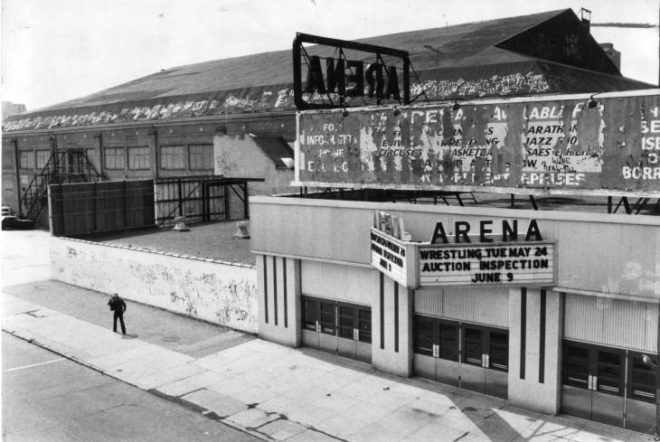 TEC was founded in 1989 by David Thornburgh, then the director of the Wharton Small Business Development Center (SBDC) and a Wharton SBDC consultant named Larry Bell. The nonprofit was created to stimulate economic growth in West Philly. Initially known as the West Philadelphia Enterprise Center, it has had no subsequent involvement with Wharton or SBDC and, instead, receives support from multiple corporations. Under Clark’s leadership in the 1990s, TEC had outgrown the offices it was leasing in the Provident Mutual Insurance Company at 4601 Market Street.

“We looked at many properties before deciding that the former WFIL-TV studio was a perfect match,” said Clark. “In the 1950s and 1960s, this site represented innovation in broadcast technology and opportunity to the community. We are returning to that sense of innovation for aspiring minority entrepreneurs in Philadelphia.” Established in 1988, TEC provides leadership training, access to capital, management assistance, and connections for minority businesses in West Philly and throughout the region.

Clark tasked architectural firm of Stephen Varenhorst with transforming the former TV studio into a state-of-the-art center for business and entrepreneurship. Renovation of 4548 Market Street was funded by a grant for historic buildings secured by Ronald H. Brown, former Secretary of the U.S. Dept. of Commerce, to whom the building is dedicated. 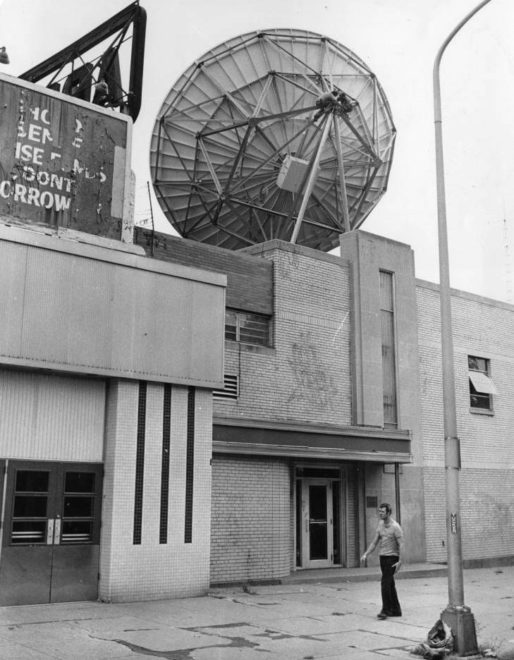 “The building was in sad shape, said Varenhorst. “WHYY parked trucks inside Studio B, where Bandstand had originated. We left the front entrance as it had been, but added a modern, rounded addition of glass and steel in the back.” Varenhorst, whose other projects include 2040 Market Street and 1900 Arch Street, was involved with the installation of geothermal heating and cooling system, one of the first in the city. The gigantic satellite dish erected by WHYY on top of the building, weighing 9,600 pounds with a 33-foot diameter, was kept as a nod to the building’s broadcasting history.

“We were one of the first buildings in an inner urban environment to have a green roof,” said Jeff Wicklund, TEC executive vice president of community development.

Sally Elk, president and CEO of Eastern State Penitentiary Historic Site, served as a historical consultant on the project. “We worked with Lou Klein, Dick Clark’s former executive producer, who told us how the building worked. For the opening event, Bandstand dancers came back and we borrowed music from an archive,” said Elk. She was also responsible for tracking down photos of Bandstand dancers which were enlarged and displayed in Studio B. 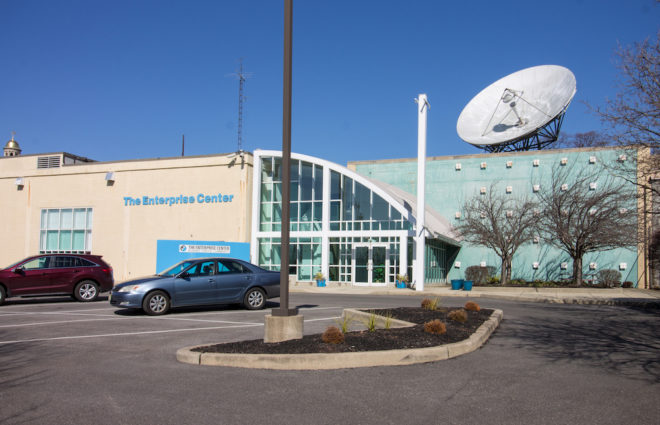 While decades of debris and moldy floors had to be cleared out, the pulsating energy that made Bandstand a national treasure can still be felt in Studio B. If you look up at the ceiling in the Sally Star Studio, there are still iron rafters of light fixtures used for television production.

In 1997, renovations were completed. Although the former studios are now used for training and conferences, there is one part of the former television station that is still being used for its original purpose. A former radio broadcast studio, now called The Grit Studios, has become Philadelphia’s premier podcasting network focusing on entrepreneurship. “We are producing major league business here, engaging with residents in community-driven neighborhood revitalization,” said Clark.