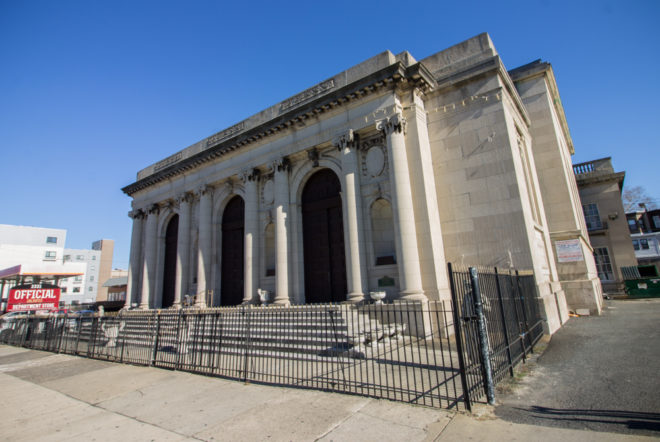 Real estate developers in Philadelphia tend to avoid buildings with historic designations. They come with a laundry list of “do’s and don’ts” that add expense and, often, prolonged aggravation. This is why investors panning for gold on North Broad Street initially overlooked the old Mikveh Israel Synagogue and Dropsie College at Broad and York Streets. That is, until development firm Brit Emet, LLC did the math. Located three blocks north of Temple University’s main campus, three blocks south of SEPTA’s North Broad Street Station, and an easy commute to Temple’s Health Sciences campus, the neoclassical complex was ripe for reactivation. With the spectacular renovation of the MET and plans for a new Marriott Courtyard at Broad and Erie, every inch of real estate in between is getting hot.

In 2015, Brit Emet, LLC bought the entire lot for $825,000. The firm hired architect Richard Villa of Ambit Architecture to transform the former Jewish college into a mixed-use complex. The new owners have no interest in removing the Beaux Arts college building which currently functions as Forget Me Knot Youth Services, a shelter for disadvantaged youth. Instead, it plans to build new residential buildings directly in front of the former college. 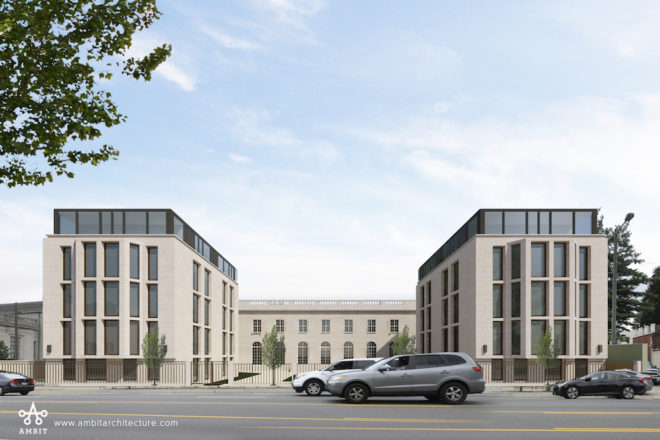 In October 2018, Villa’s first submission for a single nine-story building with 120 apartments was rejected by the Philadelphia Historical Commission. It suggested a more moderate approach. Villa’s second submission in March 2019 to construct two new five-story buildings, containing 56 one-bedroom apartments, was approved. The new structure, to be called York Place, will permit the original college building to be seen from Broad Street and preserve a smaller version of the existing garden courtyard.

When it was built in the early 1900s, Mikveh Israel Synagogue and Dropsie College reflected the aspirations of the neighborhood’s affluent German-Jewish community. New York architects Pilcher and Tachau designed Mikveh Israel in limestone in the Greek Revival style with stately ionic columns, mammoth arched bronze doors, 40-foot ceilings, and marble floors. This was not the congregation’s first synagogue. It was, however, the most opulent.

In 1782, acclaimed Philadelphia architect and champion of Greek Revival William Strickland designed an elegant white stone synagogue for the congregation on Cherry Street. In 1860, it moved to an even grander structure on 7th Street, north of Arch Street. By the dawn of the 20th century, Jewish industrialists wanted to be closer to their North Philadelphia factories. While elite gentile society gravitated to Rittenhouse Square, wealthy German Jews migrated up Broad Street. This explains the choice of Broad and York Streets for this majestic synagogue and college. 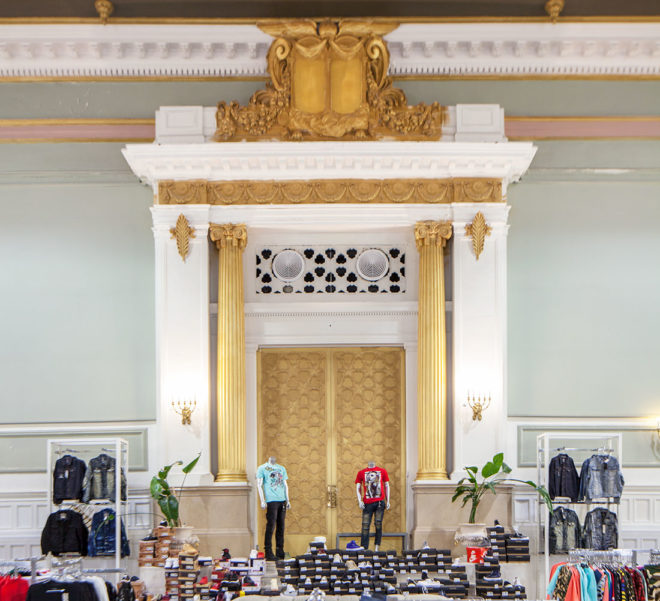 By the 1960s, factories were closing and North Philly was falling into economic hard times. Jewish residents fled to the burbs and, in 1976, Mikveh Israel relocated to its current location on Independence Mall. That is where architecture firm Harbeson, Hough, Livingston & Larson gave Philadelphia’s oldest Jewish congregation a decidedly contemporary style. Modernist master Louis Kahn famously submitted 10 proposals to the congregation between 1962-1971, but, due to costs and other disagreements, none of his designs were realized.

Dropsie College, next to Mikveh Israel, was funded by a bequest from a congregation member, Moses Aaron Dropsie. A convert to Judaism, Dropsie was a lawyer who made his fortune investing in Philadelphia street cars. The college was designed by Philadelphia architect Abraham Levy. Its restrained limestone facade reflects the purpose of the institution. Rather than being a seminary to ordain rabbis or to train Jewish educators, the college was established as the world’s first institution to offer doctoral degrees in Judaic Studies. It was open to students without regard to “creed, color, or sex.” The majority of graduates were gentile.

According to historian Arthur Kiron, the most precious asset of Dropsie College was its library, containing thousands of manuscripts, medieval bibles, and rare books, including fragments of ancient texts dating back to the 10th century. In 1986, on the 40th anniversary of Kristallnacht, arson ravaged the library’s treasured collection. Firemen’s hoses turned irreplaceable manuscripts into mud. 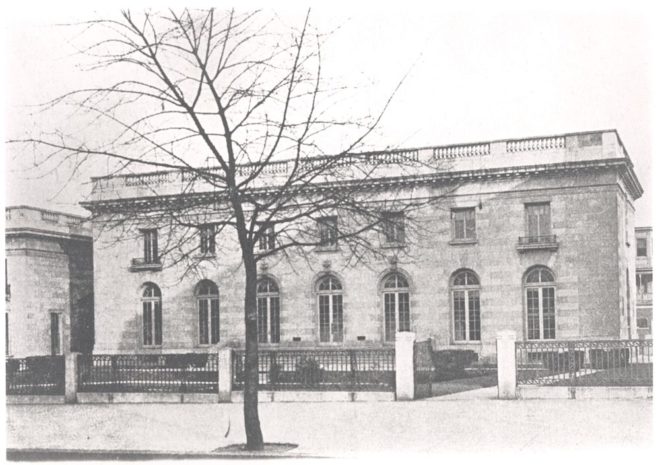 Thanks to funding by Walter Annenberg, the remains of the library were relocated, first to Lower Merion, then to 420 Walnut Street. In 1993, it became a part of the University of Pennsylvania and is currently known as the Herbert D. Katz Center for Advanced Jewish Studies. “The majority of the manuscripts and printed volumes in our Rare Book Room came from Dropsie,” said Dr. Burche Nielson, librarian and archivist at the Katz Center, who estimates that 400 manuscripts and 7,000 books are from the original Dropsie College library.

Meanwhile, Brit Emet, LLC has not approached the Historic Commission with plans to develop the synagogue. Instead, his firm leased the property a few years ago to Official Unlimited, an online athletic sportswear retailer. Today, all that is left of Official Unlimited is a huge, red, metal sign in front of the synagogue. The next tenant was Cathedral Banquet Hall which hosted weddings and hip hop parties in the same sanctuary in which moguls had prayed for redemption. As of now, the synagogue stands empty and silent, but not for long. Once York Place is complete, no doubt with a Starbucks or Saxby’s at street level, there is no telling what will become of Mikveh Israel Synagogue. It could go the way of many Philly landmarks and morph into an upscale restaurant or fitness center. Just think. One day, you may be able to knock back craft cocktails or do pilates in front of the Torah ark.

Shai and Anat Argaman, owners of Brit Emet, could not be reached for comment by the time of this article’s publication.