Finding Adolf DeRoy Mark & His Adobe in the Sky 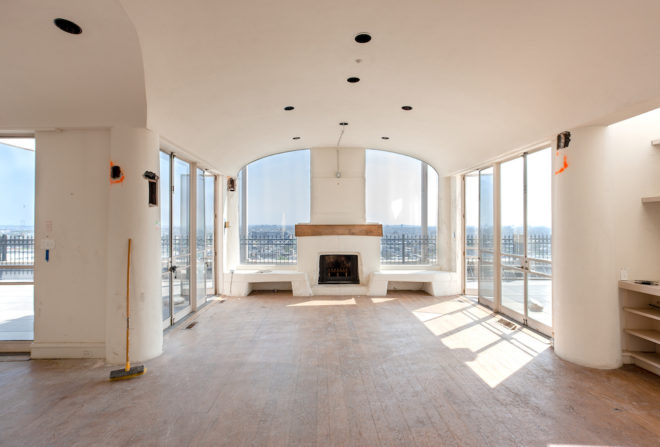 View of the living room inside Adolf DeRoy Mark’s adobe penthouse at the Touraine. The rounded columns and slightly arched ceiling, along with the gently arched and clean geometric windows, give the space a bright and open feel. This photograph was taken prior to some preliminary interior demo. The plaster around the columns has since been removed. | Photo: Andreas Billig

Architect Adolf DeRoy Mark’s incongruous “adobe” penthouse sits perched atop the southern end of the Touraine, an historic hotel that’s recently been renovated into luxury apartments at 1520 Spruce Street. You can catch a good view of it looking northwest from Hicks and Pine Streets. The flat-roofed structure seems to have just dropped from the sky, its exaggerated chimney, a Mark trademark, projecting dramatically against the backdrop of the Center City skyline. But why build an homage to southwestern architecture atop a grand 20th century hotel building in Philadelphia? The answer traces the fascinating, but little known career of one of Philadelphia’s most captivating postmodern architects.

While Mark’s eccentric style is not for everyone, his quirky designs have likely caught your eye on a walk around Society Hill. Easily identified by their exaggerated proportions, eclectic stylistic elements and unusual feel, Mark’s buildings draw attention. The red brick asymmetrical corner building at Second and Lombard Streets at Headhouse Square, with its jutting projections and geometric embellishments, is one of his most visible landmarks. Surprisingly, the majority of Mark’s work in Society Hill is concealed behind tidy colonial facades, occasionally betrayed by subtle, unconventional touches: a distinctive chimney protruding from the rear, a cheeky door knocker, architectural spolia embedded into a garden wall. 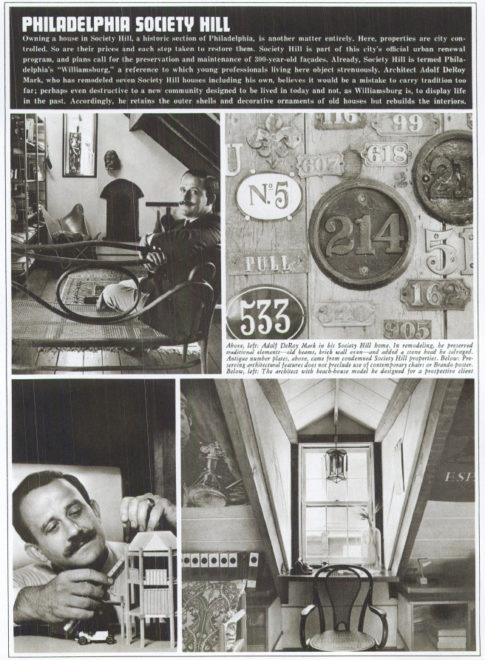 A 1966 feature in Town & Country Magazine on Mark elaborates on the architect’s approach to integrating the Modern and historic aesthetics. The caption claims that Mark, who at that time had remodeled seven Society Hill houses, “retains the outer shells and decorative ornaments of old houses, but rebuilds the interiors.” | Image: Town & Country Magazine, October 1966

Mark, who went by “DeRoy,” was born in 1928 and grew up in Philadelphia. He graduated from the University of Pennsylvania’s master’s program in architecture in 1955. His work, often described as romantic, flamboyant, “slightly perverse,” and even “part nightmare, part cartoon,” is certainly distinctive. Mark crafted intricate and individualistic fantasy worlds, each its own “object d’art” or “live-in-sculpture,” combining old materials and rich textures with modern design elements like light, large open spaces and clean geometry. Contemporary accounts portray a sense of “timelessness and placelessness,” with an aura of “faraway lands-of-the-mind.”

Mark practiced in Philadelphia during the city’s urban renewal period in the 1960s and 1970s, applying his distinctive philosophy to dozens of rehabs in Society Hill for the pioneering new wave of homeowners who bought up historic homes that had been seized by the City through eminent domain. This rehab mentality is owed, at least in part, to famed city planner Edmund Bacon’s larger approach to urban renewal in Society Hill, which prioritized the preservation of existing buildings and, ultimately, the restoration of the area to a romanticized version of its colonial-era appearance.

Under the Redevelopment Authority’s purview, Society Hill homeowners were given a window of time to restore the facades to their 18th century appearance, work that often required plans drafted by architects and an approval process overseen by the City. Unlike other cities, Bacon’s preservation-minded approach was much more sensitive to existing architecture. Ultimately, it was driven by the same racialized motive to eliminate “blight” and functioned as the same cruel removal program for the primarily minority and immigrant communities as urban renewal programs across the country. Most lower-income residents were displaced when their properties were essentially handed over to middle class buyers at low costs—buyers with the means to hire architects like Mark to renovate or rebuild. Almost immediately, property values exploded in Society Hill and, even today, it remains one of the most exclusionary neighborhoods in the city. 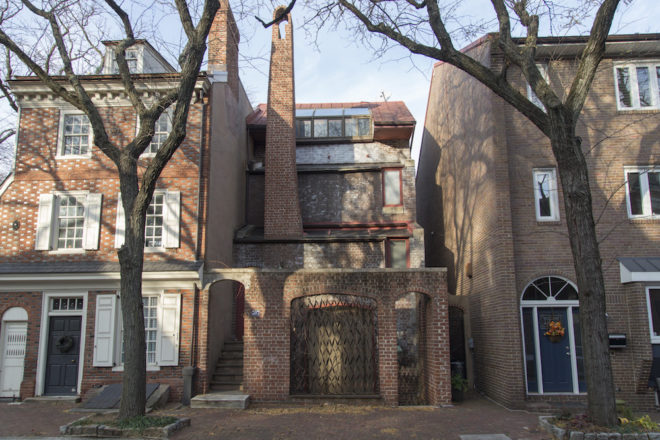 The mandate for reuse and rehabilitation suited Mark’s aesthetic sensibilities, although he brought an extraordinary amount of creative license to his practice, picking and choosing historic elements to incorporate—old marble from front steps into a new mantelpiece, or steel from an old fire escape into a new circular stair—while breaking open interior spaces and introducing atriums, windows, large open spaces, and lush, oasis-like gardens.

“Mark is a holdout from the redevelopment penchant to ‘go in and gut,’” wrote Ellen Kaye for the Philadelphia Inquirer in 1977, “which he deplores for its ‘lack of respect for what was.’” A 1966 feature in Town and Country Magazine noted that Mark “retains the outer shells and decorative ornaments of old houses but rebuilds the interiors.” He was known for reinvisioning dark, cramped row houses, many of which had been subdivided into small apartments and tenements housing multiple families, into single family homes that were light-filled and “comfortable for modern living.”

Another signature of Mark’s designs is that he often incorporated architectural spoils harvested from demolished buildings, dumps, or acquired throughout his travels. His own home and basement office in a 16-foot-wide, circa 1804 row house and former bakery was a shrine to this “salvage philosophy.” On incorporating the interior of the baker’s oven into his walled back garden, Mark remarked in an interview, “You can’t get that look from scratch…you have to start with something.” 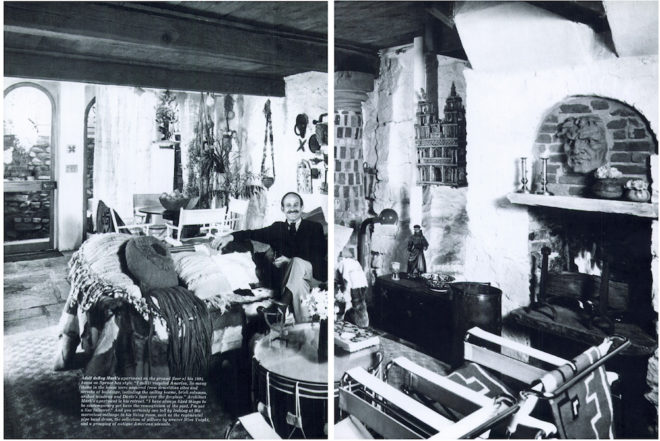 Mark in his basement “apartment” on Spruce Street. The walls are left a rough texture, treated with white limewash or paint and the room sports two tapered columns made by Mark from recycled brick. “Dante’s head,” an artifact from a demolished building, rests over the fireplace. | Image: Town & Country Magazine, October 1966

Other times, he would bring in historic elements from elsewhere. His kitchen incorporated tiles from Philadelphia trolley tracks, cabinets built from an antique desk, and a door salvaged from a demolished townhouse. Mark enthusiastically repurposed and reused materials to modify and recraft spaces, often adding historically-inspired elements like curved ceilings, antique hardware, rough textured walls, and exposed wooden ceiling beams, to enhance their timeless quality. And spolia show up in most of his projects. Interior wedge-shaped pillars made from salvaged brick and other architectural nuances are a signature touch.

Mark’s urge to recycle seems to have been driven as equally by ideology as aesthetic tastes. “No one could afford to build my apartment if they had to go out and buy the materials,” he told the Inquirer in 1973, “Yet, most of them I found in junk piles… I just saw a dumpster on Spruce Street carting 15 beautiful doors. They’d cost $200 apiece to have made, if you could find anyone to make them today. I’m going up to the dump tonight to get those.”

In 1974, Mark, his wife Donna, and their daughters Courtney and Colleen headed to Carefree, Arizona, “in a U-Haul truck crammed with ‘bits and pieces of Philadelphia,’” Mark told the Inquirer. His collection, stored in a Scottsdale warehouse, included “a stone lion from the old Bartram Hotel, a Victorian cornice from a dismantled West Philadelphia mansion, and an early industrial staircase from a bank that used to stand at 40th and Lancaster.” Over the course of several years, Mark and his family built a sprawling, sculptural, adobe-inspired home. Mark opened his Scottsdale office in 1980 and his work in Arizona included a number of residential commissions, commercial rehabs–including the somewhat controversial Papago Plaza–along with streetscape and district improvements for the City of Scottsdale. 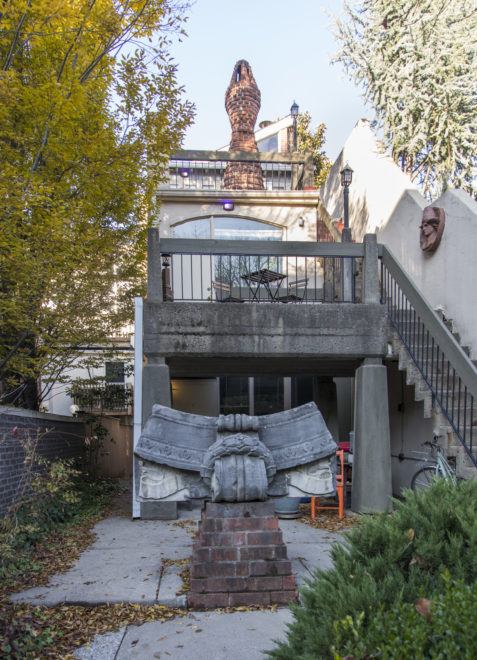 An extensive rehab at 407 Cypress Street has been subdivided into apartments. A massive sculpture made of salvaged carved stone mounted on brick sits in the courtyard entrance. More spolia has been incorporated on the wall of the star and a central sculptural brick chimney projects from the second floor. | Photo: Starr Herr Cardillo

Then, in 1981, just like he carted bits of Philadelphia to enhance his work in the southwest, Mark brought a bit of desert flair back to Philly when he was commissioned to design a faux adobe bachelor pad atop the Touraine, which was once home to jeweler Craig Drake. The small house originally sat at the south end of the building, surrounded by terraced gardens planted with “southwestern-style grasses” that encircled the floor to ceiling windows creating the illusion of looking out at open grasslands and big sky from within.

The penthouse is accessed via a private stair, masked as an ordinary apartment door on the uppermost floor. Visitors emerge into a skylit atrium with built-in wall nichos, the quintessential touch in southwestern design. A central kiva style fireplace is the focal point of the open living room, flanked by built-in benches and walls with floor to ceiling windows. Simple, custom built-in cabinetry and shelving adorns the walls and the bathroom is fitted with a tiled whirlpool tub that now faces the ever-changing skyline. The ceilings throughout are treated with a gentle slope at the edges. Mark’s signature porthole windows frame up playful glimpses of the city.

The architect’s take on “Santa Fe” and “pueblo” style architecture lends deliberate and sophisticated nuances to what might otherwise be mistaken for a dated, suburban aesthetic. Although the adobe has been modified–Drake lived in the home for more than a decade and made some minor changes–and the terraced gardens are now gone, plenty of his intention remains. 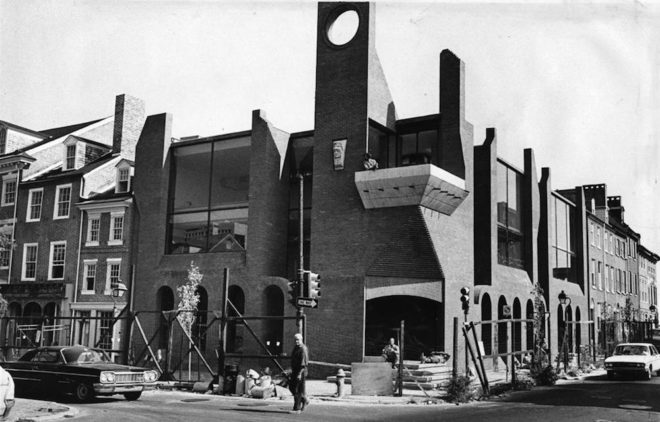 This modern infill, with its asymetrical tower at 2nd and Lombard Streets, is probably one of Mark’s most recognizable designs in Philadelphia. It now houses a CVS. | Temple University Libraries, Special Collections Research Center

Sadly, as is all too often the case with the more recent architectural past, Philadelphia’s anomalous adobe is not long for this world. Spruce Street Commons, the group that has put $10 million into beautifully renovating the historic Touraine since 2010, are not planning to restore the penthouse, citing structural issues and its less than desirable orientation on the roof relative to the Center City skyline. The firm has already begun interior demolition, eliminating the curved pillars, front gardens, and most of the built-in cabinetry and plan to finish demo in the coming months.

The team’s managing director informed me the new penthouse design offers a modern take on the Brutalist style. While all indications of the team’s previous work suggest that the new design will be sleek and tasteful, the fact that the city’s one and only wacky postmodern “adobe” will be forever gone and replaced by something described as “Brutalist”—a style widely maligned and enthusiastically demolished until only recently—adds a layer of irony that’s not lost on preservationists.

Perhaps within another decade or so, Mark’s wild eye will, too, gain more appreciation. With a little context, it certainly becomes easier to appreciate the fantastical whims and unrestrained enthusiasm of an architect whose—as one Inquirer editor put it—“slightly   perverse-personal touches on old Philadelphia buildings will probably be counted as some of the most interesting regional architecture of our time.” 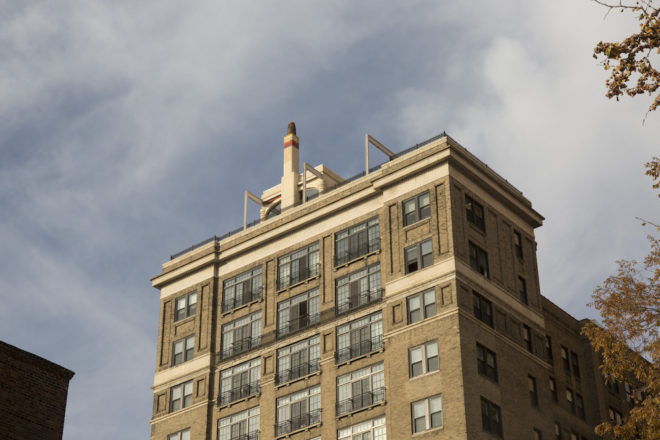 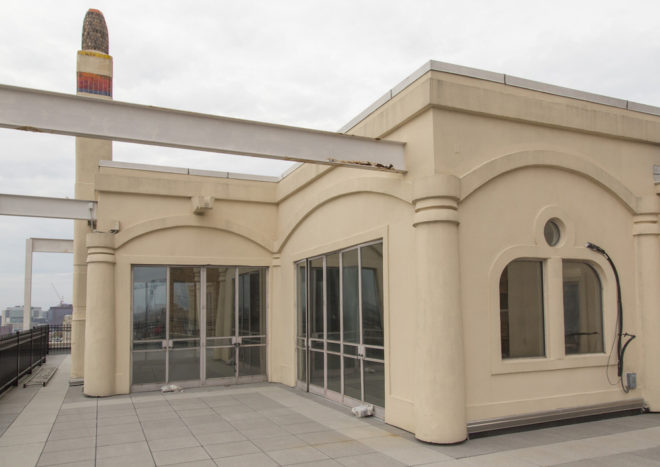 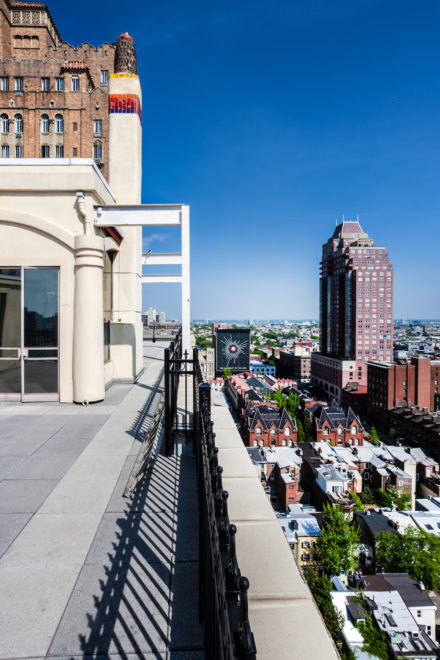 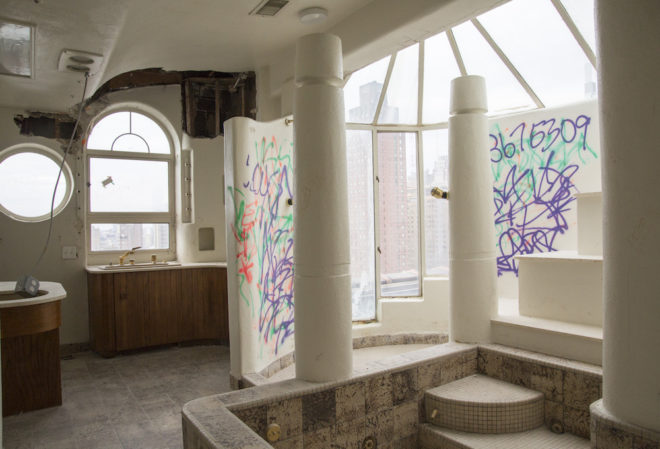 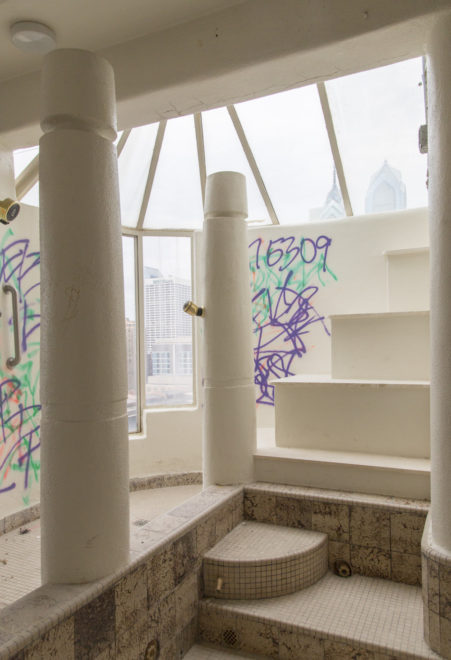 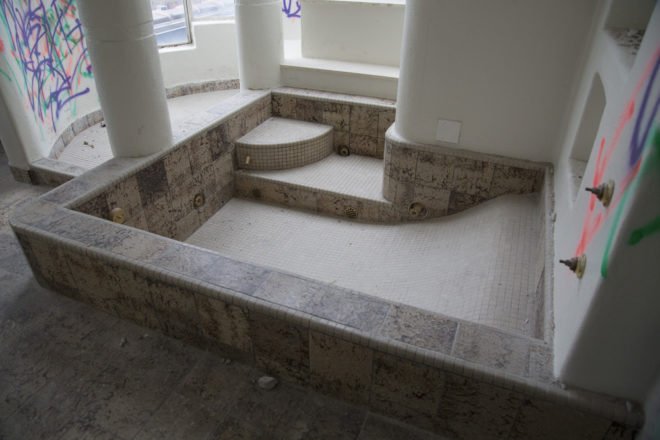 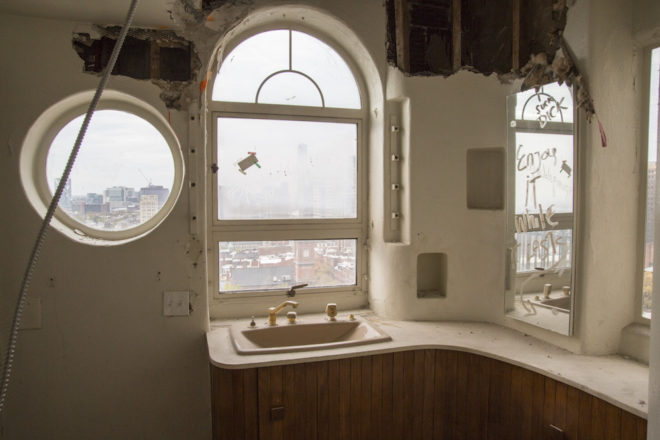 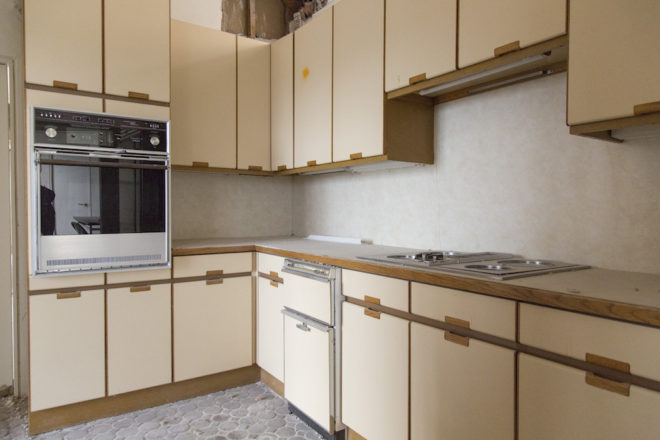 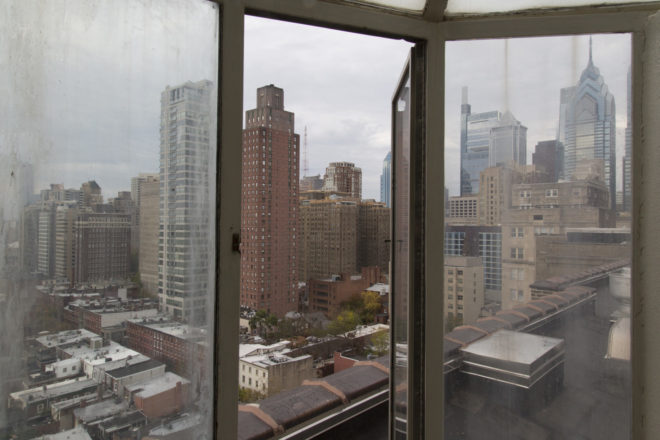 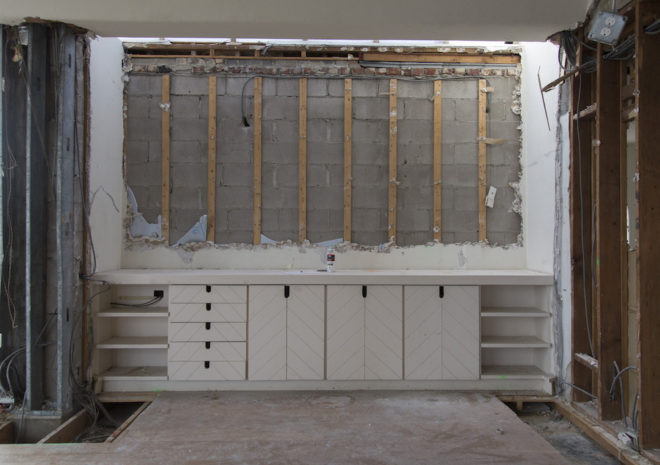 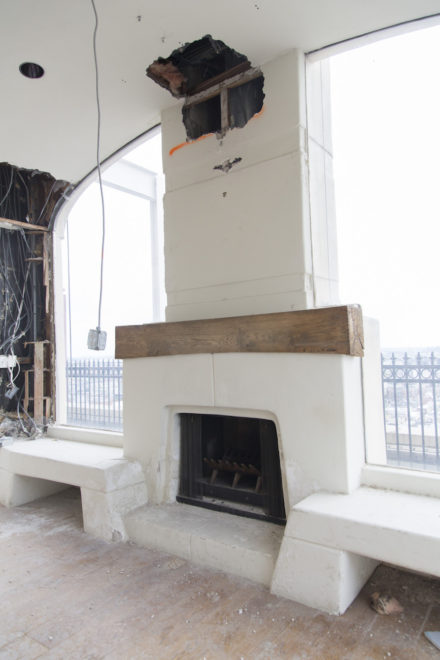 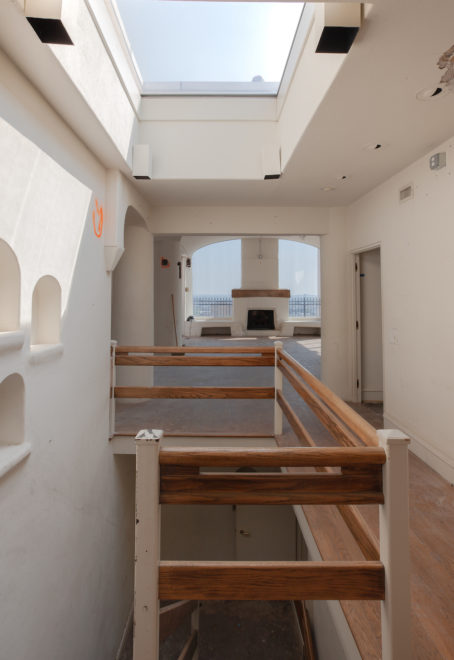