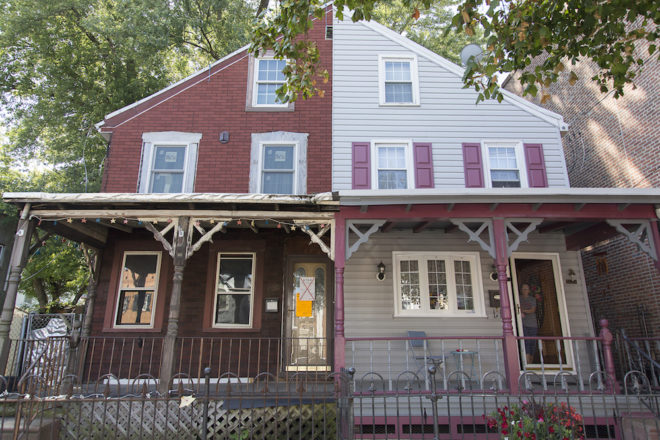 A demolition permit for this wood frame twin home on the 1500 block of Montgomery Avenue was revoked earlier this year after members of the Riverwards L+I Coalition drew attention to the structurally dangerous plan. Activist Venise Whitaker said the group hopes to work with the Department of Licenses and Inspections to stop partial demolition of attached twins. | Photo: Starr Herr-Cardillo

On Sunday, December 15 Fishtown activists Venise Whitaker, Cully Ward, Jennifer Romaniw, and Rachel Kaminski—all key members of the Riverwards L+I Coalition, a citizen-led Facebook group that formed in response to the extraordinary construction boom taking place in the neighborhood—met in a former church at 2345 E. Susquehanna Avenue. Warm winter sun poured through the long, stained glass windows as each shared their experiences with what Whitaker calls “construction destruction” with filmmaker Jason Sherman, whose new documentary, Cutting Corners, aims to explore issues around new construction and its impact on neighborhoods across the country.

The gracious stone building made for a fitting venue. Once targeted for demolition by a developer, it now houses True Hand, a tattoo and piercing studio run by Mike Ski, who owns the church and also lives there. Whitaker, using skills learned through the Citizen’s Planning Institute, helped Ski navigate the byzantine processes required to convert the church for adaptive reuse, including helping him secure neighbors’ approval.

It’s this kind of community collaboration that Sherman, who wrote, directed, filmed, and produced The King’s Highway, hopes to highlight in Cutting Corners. The narrative arc will focus on Philadelphia, specifically development in Fishtown and the response led by the Riverwards L+I Coalition, although he hopes to travel to cities around the country to better demonstrate the ubiquity of the issue nationwide. Sherman sees the movie as a call to action and hopes to demonstrate how residents in cities are “fighting back against real estate developers who are destroying their neighborhoods.”

If you have ever observed the curt efficiency with which the Coalition’s administrators moderate the Facebook group, often tapping one another to manage various tasks dozens of times a day, you might assume a certain level of old fashioned neighborly familiarity. Yet, December 15 was the first time all four had ever met in person. The sanctuary buzzed with animated conversation and the exchange of several rounds of praise between the group members as Sherman prepped the area for formal interviews. Cully Ward summed up the sentiment by saying, “If there’s one positive thing that’s come out of all of this, it’s that I’ve really gotten to know my neighbors.” 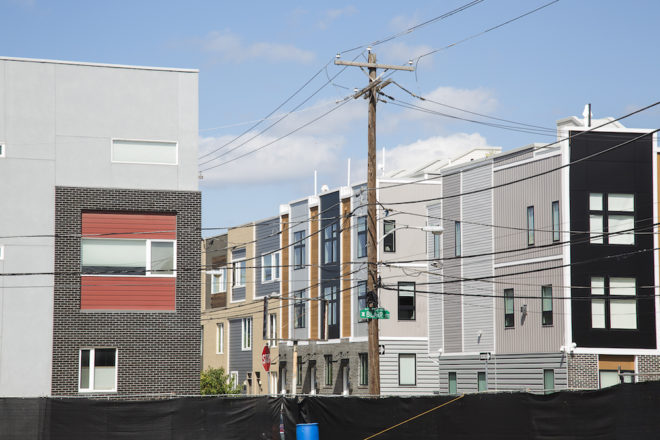 The sheer amount of new construction in many parts of Fishtown is staggering. | Starr Herr-Cardillo

Each of the four women has a slightly different relationship to the central issue, but all stand steadfast by the group’s principles: to educate and equip residents with the information needed to recognize and report construction-related violations and to keep it inclusive. “We are all in this together,” Whitaker remarked, emphasizing the group’s role of educator and helping one another. “It can be intimidating… how valid are your complaints if you don’t really know what you’re talking about?”

Not everyone comes to the group under the same circumstances. “We are not really the type of person that people feel sorry for,” Ward laughed, explaining that she had moved in to new construction in the area. Ward is currently part of a 10-unit lawsuit. A gag order prevents her from sharing details about the case—a not uncommon arrangement and an equally important part of her story. Like Ward, many homeowners settle their cases in court and, as a result, are prevented from speaking out about damages incurred, which can have the effect of stalling any sort of cohesive momentum or movement around the larger issue.

Rachel Kaminski became involved through her work with another citizen-run Facebook group, “Get the Lead OUT: Riverwards Philadelphia,” where she is also an admin. Kaminski says she first became aware of the relationship between increased lead dust and improper demolition protocols after reading an article in the Philadelphia Inquirer. She then became active in researching best practices used elsewhere and advocating for better protections in Philadelphia, eventually working with L+I Commissioner David Perri through Get the Lead OUT. Whitaker tapped Kaminski to help with the Coalition and to lend a voice as it moved to work with the Department of Licenses and Inspections.

Romaniw is affiliated with one of the highest profile cases in the city. Her grandmother’s home at the corner of Thompson and Berks Streets partially collapsed after the construction crew attempted to dig out the neighboring basement without proper permits. Romaniw wasn’t in the house at the time of the collapse—she had walked to pick up her son from school—but she returned to find the street blocked off by fire engines. Her family members and grandmother had evacuated in a panic, kicking in the front door, which had become stuck when the house shifted. 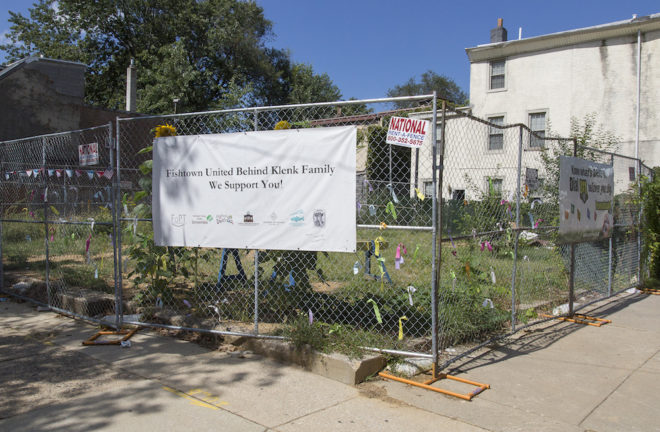 The former site of Jennifer Romaniw’s grandmother’s home at the corner of Berks and Thompson Streets. The house partially collapsed due to an unsafe construction site next door and had to be demolished in February. | Photo: Starr Herr-Cardillo

For Romaniw, the frustration is connected to an unwillingness for any agency, at the city, state or federal level, to take leadership in dealing with such a scenario. “We called 911, we called 311, and nobody knew who to send. We had nowhere to go,” she recalled on camera. Romaniw is concerned that current measures do not adequately address the issue, with nothing preventing bad acting developers to form a new LLC, hire a new crew, or otherwise disassociate from past violations.

In cases like her family’s, where the work was unpermitted and it was proven not to be up to code, Romaniw would like to see criminal charges pressed. “If I just went to your house and took a bat and smashed out your windows, you’d call 911 and the responding officer would do something. Why is this different?” She continued, “They’ve damaged the house to the point that it’s unlivable. Why aren’t we holding people accountable?”

Like many involved in the Coalition, director Sherman also has personal ties to the subject matter. His brother’s three-story brownstone had to be razed after a developer bought the house next door and knocked it down improperly, causing the remaining home to shift to the point that everyone inside had to be evacuated. The house had to be demolished. On why he decided to make a film, Sherman said it felt necessary. “I figured, someone has to do this. Someone’s got to tell the story. I don’t have any gag orders—my brother might, but I don’t have any.”

For now, Sherman is funding the project entirely out of his own pocket and spending his own time filming, using the same setup he did for The King’s Highway. He hopes to initiate a Kickstarter campaign in the coming year to raise funds to continue the project.