In Germantown, Echoes of Industrial History Resonate in New Development 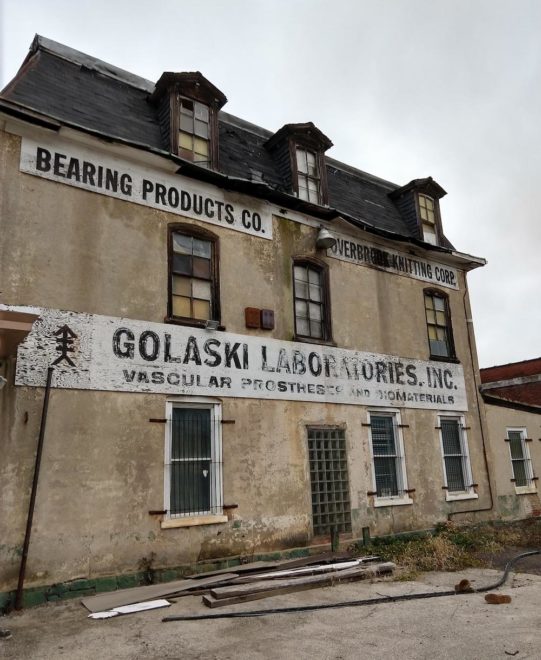 Mosaic Development Partners recently began a redevelopment project at 4567 Wayne Avenue in  Germantown. Going by the name Golaski Labs, plans feature 40 residential units, several office spaces, a restaurant and cafe, as well as off-street parking lots for visitors and residents. The project is expected to be completed by September 2020.

Mosaic’s Golaski Labs was made possible by the passing of the Tax Cuts and Jobs Act of 2017. A provision of this law establishes “Opportunity Zones,” which incentivize private investment in communities and neighborhoods of cities deemed undercapitalized by the United States government. These incentives come in the form of tax benefits, offering the investor different levels of tax breaks. The longer the investor holds onto their stake, the bigger the tax cut. In fact, if the investor waits 10 years to sell their stake in the project, they will not be required to pay taxes on any of the profits. The Tax Cuts and Jobs Act has spurred new development projects throughout many of Philadelphia’s underprivileged neighborhoods.

The name Golaski Labs seems an odd choice at first glance, however, this name pays homage to Golaski Laboratories, the small medical and textile factory that once stood on the same lot. In just a few years, this small section of Germantown will be transformed. Only the name will remain, representing a history that might otherwise be completely lost. 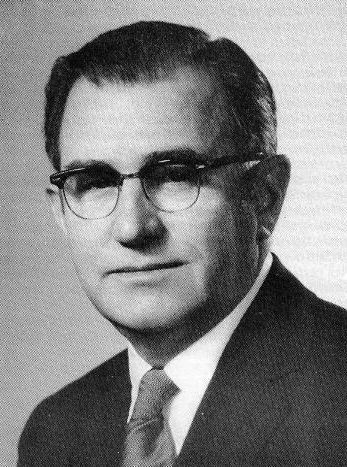 Golaski Laboratories was owned and operated by Walter Golaski, the son of Polish immigrants Paul Golaszewski and Helen Kulesza. Paul and Helen met in New York and relocated to the small industrial town of Torrington, Connecticut, known for its brass, needle, and textile production and manufacturing industries. There Paul worked for the American Brass Company, one of the major brass production companies in the United States at the time. In 1913, the couple gave birth to their son.

By the age of 16, at the onset of the Great Depression, Golaski took an entry level factory position at the Torrington Company. The plant used a method known as “cold swaging,” which was first developed by the Excelsior Needle Company in the 19th century and was absorbed by the Torrington Company in 1898 to produce a vast array of sewing machine needles, knitting needles, and hook needles for both commercial and industrial use. The company also created other machined parts, such as spokes for bicycle wheels. It is at the Torrington Company that Golaski would become familiar with the textile and needle manufacturing industries.

In 1939, the Torrington Company promoted Golaski to manager and transferred him to its textile mill in Philadelphia. He attended the Drexel Institute of Technology’s Mechanical Engineering night program, where Golaski would learn the fundamentals of physics, mathematics, and engineering. He graduated from the program in 1946 with a Bachelor’s of Science, but Golaski would not wait to receive his degree before making significant contributions to the textile industry. In 1940, while still working at the Torrington Company’s Philadelphia mill, Golaski developed a method to reuse or update hosiery machines so that they could process nylon rather than organic materials such as silk. This update to the old silk machines was particularly important to manufacturers during World War II. Many of their silk machines had become obsolete during the war, as silk was being heavily rationed by the United States government in order to produce parachutes for paratroopers overseas. With Golaski’s upgrades, the manufacturers were able to use their old silk machines again to manufacture nylon products. 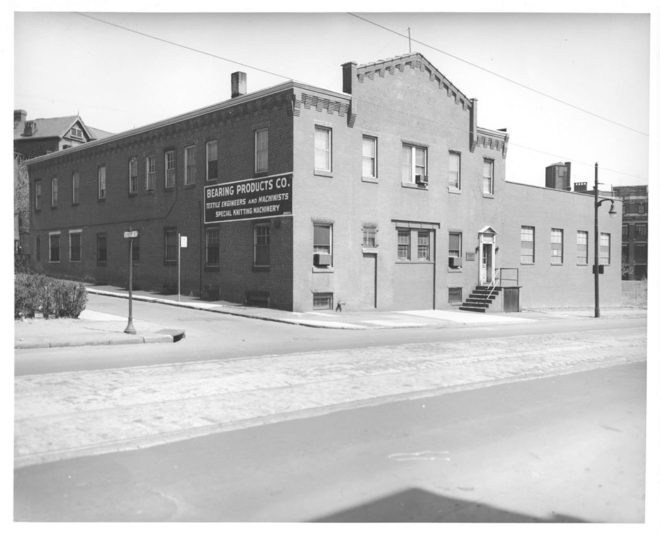 Golaski founded his first business in 1945. Bearing Products Company was located at 3339 Lancaster Avenue. Initially, the company developed self-lubricating ball bearings, which quickly expanded throughout the rest of the 1940s and into the 1950s to include developing and manufacturing new knitting machines. Through the success of the Bearing Products Company, Golaski was able to purchase, incorporate, and reorganize the Overbrook Knitting Corporation in 1956, which made upgrading old knitting machines possible and became an integral aspect of his work during the 1950s. In fact, Golaski would acquire multiple patents for the devices and modifications he developed during this time period. These patents included myriad innovations. A circular knitting machine was modified to reduce friction and heat. Another knitting machine was able to produce patterns into fabric without the use of additional or auxiliary thread. An upgrade was created for existing machines to streamline the production of open faced sweaters, such as cardigans, by removing the need to switch out needle sets for different types of stitching. A narrowing finger was produced for knitting machines, making it possible to widen or narrow a stitch on demand. This reduced fabric gore and strengthened garments like stockings, sweaters, and other articles. These are just a few of the inventions that Golaski would develop over the course of his life.

Perhaps the most important invention of his was the close-knit dacron vascular graft. These grafts were produced and manufactured at Golaski Laboratories from the 1960s until the 1990s. The small production facility, which consisted of two converted Victorian-style homes and a large factory warehouse, controlled the entire manufacturing process from start to finish, including printing the marketing materials, creating the packaging and labels for the devices, and shipping them. 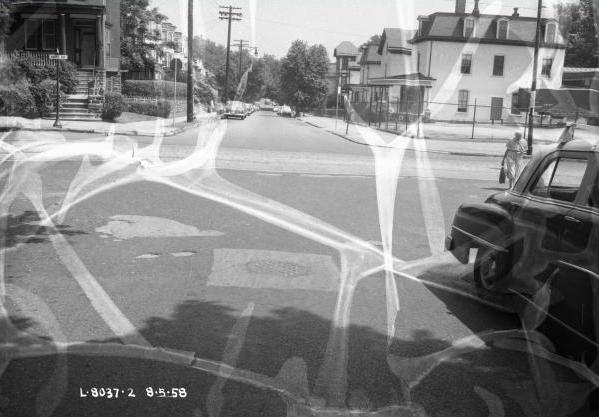 Golaski’s prosthetic arteries were made of polyethylene terephthalat (PET), a hydrophobic material in the polyester family. While Golaski was not the first to invent synthetic vascular arterial grafts, he was certainly the first to invent finely knit prostheses which were both soft and pliable, had a high porosity, had a high degree of efficiency of pre-clotting, and were long lasting. Prior to the Golaski knitted dacron grafts, synthetic textile grafts were typically brittle, stiff, and not sufficiently porous to allow for ideal blood flow or for tissue ingrowth–the process whereby the host actively grows tissue around, and develops a symbiotic relationship with the foreign material. Part of the difficulty with these vascular grafts was that the knitting machines used to produce them could not knit a mesh fine enough to allow proper patient hosting. The typical machine could only knit at a 22 to 30 needles-per inch mesh. Often these grafts required additional texturized, stretch, or other bulk yarn to help control the porosity. In contrast, the machines that Golaski developed to produce his arterial prosthetic material were capable of knitting vascular prosthesis at 40 needles per inch. The result was a finely knit prosthesis which was soft and pliable due to its thin-walled fabric and did not require any amount of additional yarn. This made Golaski’s vascular grafts easy to handle and manage during surgery. Due to the fine knitting, the grafts were efficient at keeping liquid in, but also porous enough to allow tissue ingrowth. In testing, these grafts performed exceedingly well and were superior to all other polyester prostheses tested at the time.

Despite the success of the arteries in testing and in practical use, Golaski never acquired a patent for his invention. A medical patent would have provided a detailed outline on the entire manufacturing process for the grafts, including how he achieved the very fine knit, the chemical compacting process he innovated to achieve softness and flexibility, the heparinize method he used to reduce blood coagulating, and the exact blend of polyester used for making the dacron. Medical patents only last 20 years and can not be renewed once expired. Golaski feared that by obtaining a patent, he would ultimately lose his exclusive rights to the manufacture and sale of the breakthrough prosthetics. With an expected FDA testing period of almost a decade before approval, he could anticipate only 10 years of exclusive patent rights before his patent expired. After its expiration, Golaski foresaw that his small factory would be completely overshadowed by larger competitors. As a result of this protectiveness, the secrets of producing the finely knit arterial prosthetics remained unknown. 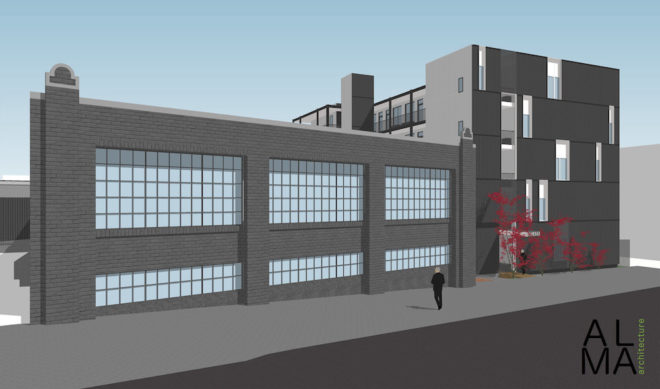 At the height of Golaski Laboratories’ success, Golaski also served as chairman of the board to the Kosciuszko Foundation. The New York-based foundation was founded to develop and promote intellectual and cultural relations between the United States of America and Poland. This was accomplished through programs and grants that allowed scholars to travel between Poland and the United States to conduct, continue, or finish research and present their work in lectures. Golaski promoted his Polish heritage and helped create a cultural exchange between Poland and the United States for over a decade and remained dedicated to his Polish ancestry for the rest of his life.
Golaski passed away on September 22, 1996 at the age of 83. In 2019, the production facility of his vascular prosthetics, Golaski Laboratories, was demolished to begin the production of Mosaic’s development project. Golaski’s additions to Philadelphia history, Polish-American history, and the history of medicine are undeniable. While his factories are no longer in existence, his contributions have been immortalized with a Pennsylvania Historical Marker on Drexel University’s campus at 34th and Lancaster Streets.

Inside the remains of Golaski Laboratories in Germantown. Photographs by Jacob Downs. 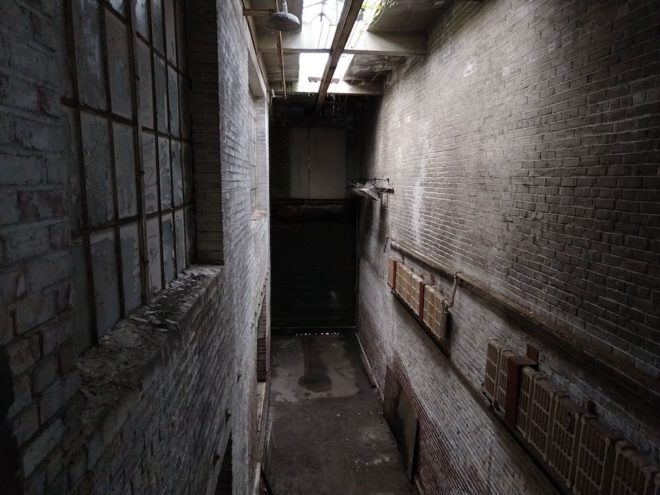 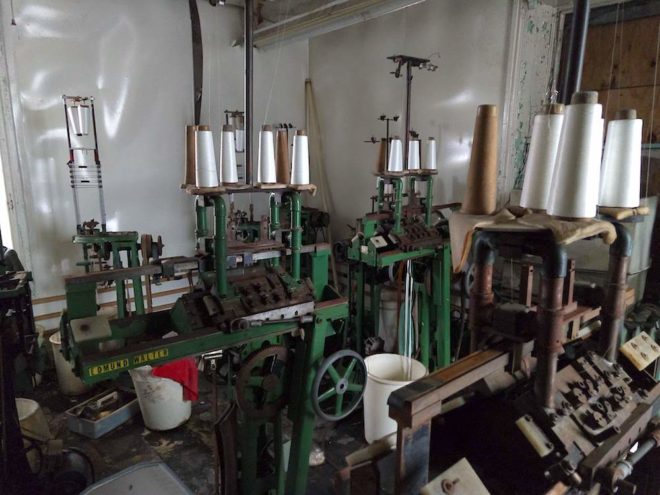 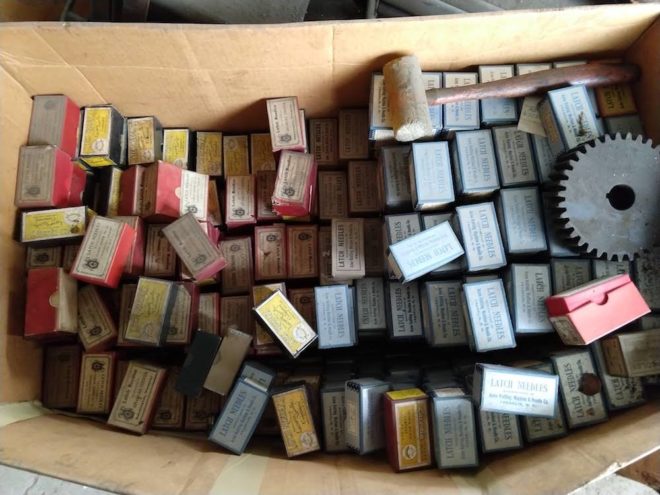 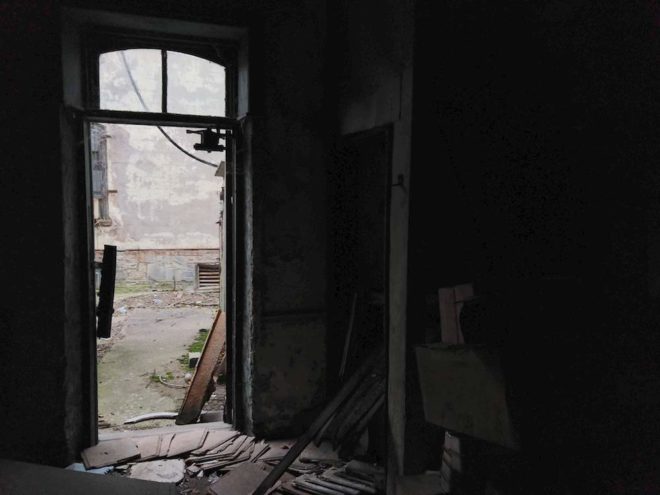 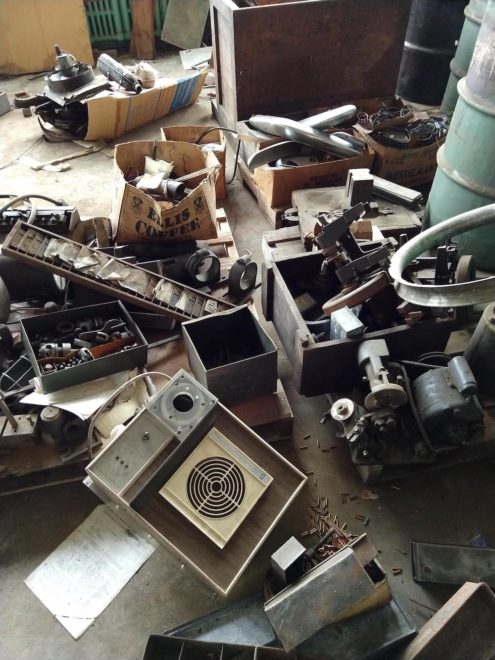 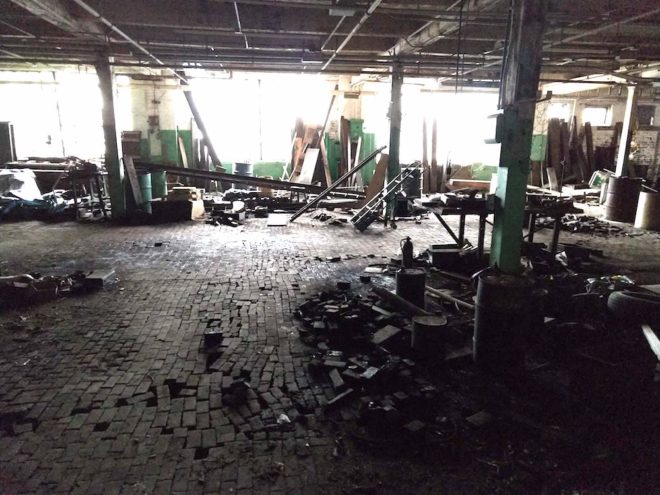 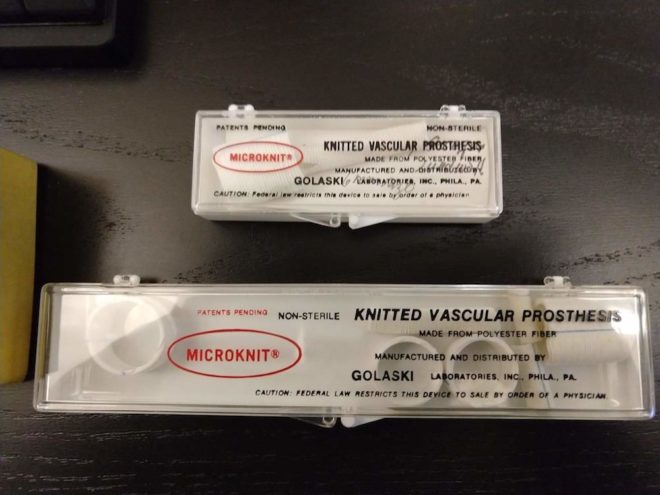 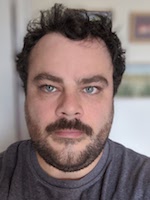