He Sees You When You’re Sleeping, He Knows When You’re Awake: Christmas & Counterterrorism at the Quartermaster Depot 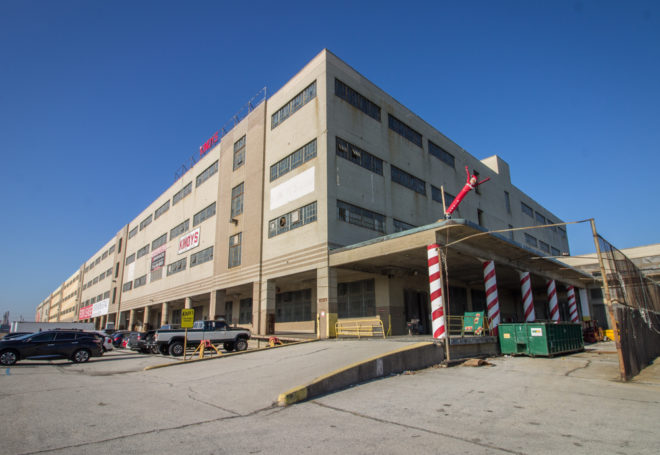 If you have ever wondered what the sale of Christmas tree tinsel and the coordination of interagency government surveillance have in common with the manufacturing of World War II military uniforms, look no further than the former Quartermaster Depot in South Philly where Kindy’s Christmas Factory Outlet and the Delaware Valley Intelligence Center both call home.

Overlooking the north side of the Schuylkill Expressway just west of 20th Street, the exterior Kindy’s doesn’t exactly glow with yuletide cheer. Faded red and green pendant flags and strings of dull, opaque Christmas bulbs trace a line of barbed wire along the top of a chain link fence. A ripped and faded Santa air dancer draws visitors towards the spooky, hidden entrance with sad, struggling flair. The first floor roof over the loading dock is lined with small plastic Christmas trees. Behind it all, the beige brick warehouse facade looms large and threatening.

Granted, any attempt to lend the exterior of this gigantic concrete factory some holiday warmth is destined to be an uphill battle. When it was constructed in 1942 as part of the Quartermaster Depot, it was the largest concrete building in the country, with a flat, four-story facade extending nearly 1,000 feet. At that time, however, its function seemed somewhat more well-suited to its form. It was devoted not to outfitting South Philadelphians with Christmas decorations for their homes, but with dressing United States soldiers for World War II.

The Quartermaster Depot grew out of the operations at the Schuylkill Arsenal, which was located on Gray’s Ferry Avenue near the Schuylkill River. The arsenal was built in 1802 and was most famous for storing and shipping supplies to the members of the Lewis and Clark Exhibition as well as for soldiers in the Civil War. In 1918, while storage, distribution, and manufacturing activity at the arsenal continued to grow, the army leased 61 acres near Oregon Avenue and 20th Street with the plan to house expanded storage and distribution facilities. By 1922, the arsenal’s work with clothing and textiles had been fully transferred to five large warehouses on the new site. In 1926, the new site became officially known as the Philadelphia Quartermaster Depot. Through the 1920s and 1930s the depot manufactured full military uniforms and a range of supplies including tents and flags. In the 1930s, it additionally supplied all of the clothing and equipment for the 600,000 members of the Civilian Conservation Corps. 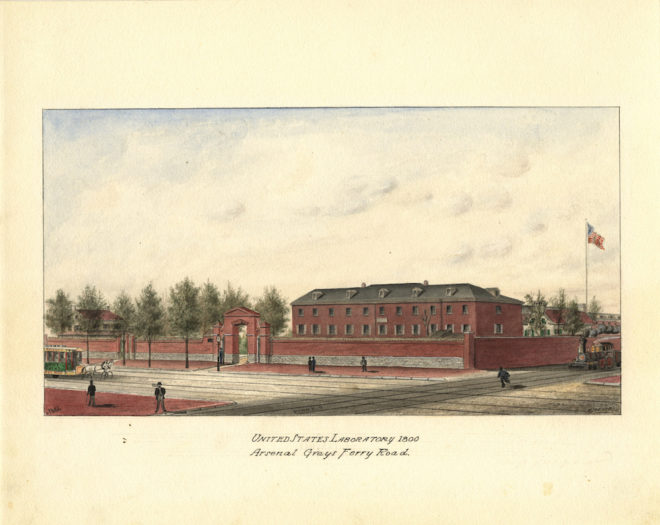 This watercolor painting by Benjamin Ridgway shows Schuylkill Arsenal in 1882. | Image courtesy of the Library Company of Philadelphia

In 1939, the Quartermaster department purchased an additional 26 acres directly adjacent to 20th Street, and it began construction on the buildings that remain standing today. Architects Ballinger and Company designed the Art Deco complex, a $15 million project which comprised 11 buildings and over two million square feet of usable space. Building 9, now home to Kindy’s, was the largest, used as the main warehouse as well as the factory for “sponging,” i.e. preshrinking the wool that would be used for uniforms and other goods manufactured at the depot.

During World War II, activity at the Quartermaster depot reached its height. It stored and manufactured military items ranging from shoes and socks to belts, sleeping bags, and mosquito netting, with a work force averaging over 15,000 men and women from 1941 to 1945. In 1965, the depot was renamed the Defense Personnel Support Center, and throughout the Vietnam War, it supplied not only jungle fatigues and dress uniforms to troops, but food and medical supplies as well. More than 4,000 people were employed annually through the 1980s. The clothing factory closed in 1994, but not before serving as the Army’s sole provider of clothes during the early months of the Gulf War in 1991. 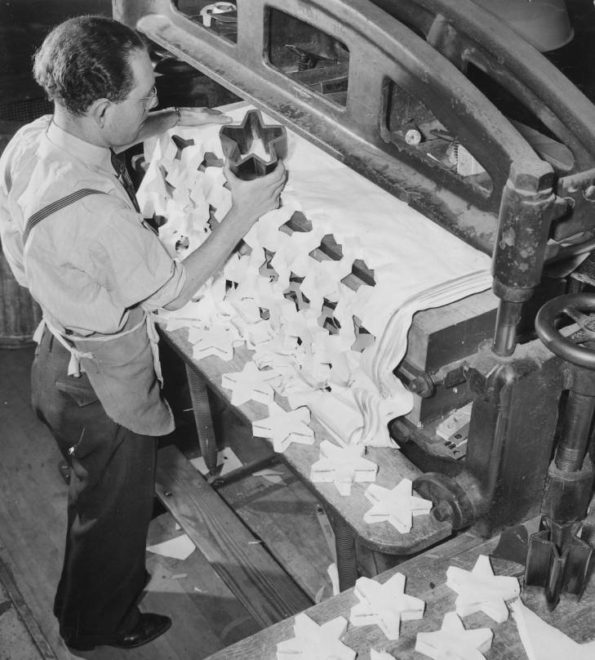 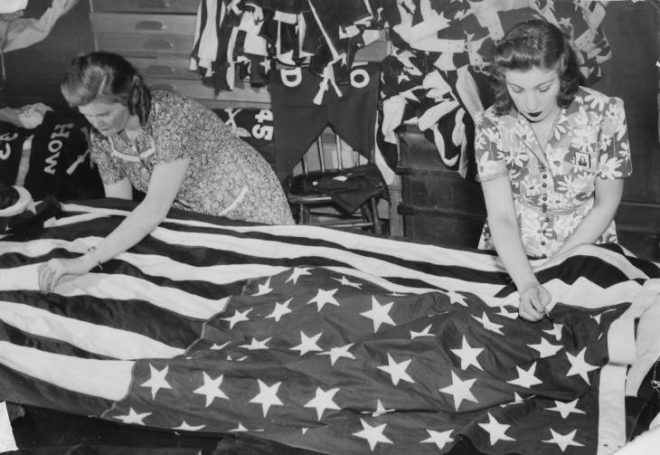 Today, Quartermaster Plaza, home to BJs, Home Depot, and Staples, occupies the land where the original World War I warehouses once stood, but the eleven-building complex completed in 1942 remains fully intact, although much of it looks forsaken. The striking Art Deco entrance to Building 14, home to the old cafeteria and a six-lane bowling alley, hides behind overgrown bushes in what feels like a back alley behind the other buildings. A sign reading “Hart Place” on an adjacent building serves as a reminder that this used to be such a bustling complex that street signs were necessary to navigate within it.

Brite Star Manufacturing, Kindy’s parent company, bought 30 acres, including Buildings 9 and 13, in 1997. The other buildings, owned by Sky Management since 2001, are currently being renovated for 800,000 square feet of office and flex space. The Philadelphia Job Corps Center occupies Building 12, and Building 6 in the rear of the complex, never to be seen unless you know to look for it there, houses the Delaware Valley Intelligence Center.

The Delaware Valley Intelligence Center, which opened in June 2013, was a $20 million undertaking, largely funded by the federal government, aimed at facilitating information sharing and analysis among federal, state, and local agencies including the Philadelphia Police, Homeland Security, regional transit authorities, and the FBI. It is one of 77 “fusion centers” in the country, created after the Department of Homeland Security concluded that a lack of intelligence sharing contributed to the 9/11 attacks. Fusion centers have been an object of criticism among those concerned about civil liberties violations connected to widespread intelligence gathering and sharing, as well as within a 2011 Senate report that criticized the centers as largely ineffective, wasteful, and poorly supervised. Other than among staunch civil libertarians, though, DVIC seems to receive little public scrutiny as it goes about its business, quietly supporting initiatives such as “Look Up, Speak Up,” an attempt to encourage regional transit riders to “report anything suspicious” to a special hotline, #1776. Other than a revamped glass entrance, there is little indication from the outside of the building of the deluxe, high-tech center housed within old Building 6, which served as a manufacturing plant and inspection station for the depot. 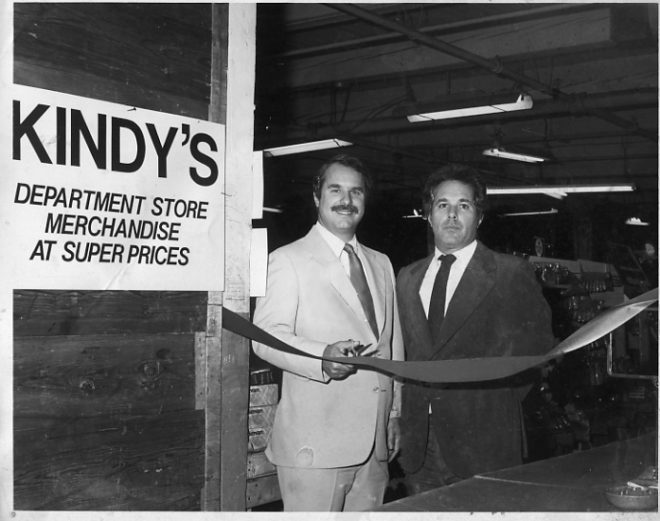 Perhaps the discreet presence of DVIC provides poignant dialogue on the evolution of the Quartermaster Depot. For nearly 100 years, thousands of people worked within these walls to supply U.S. troops with many of the physical materials they required for wartime: uniforms, shoes, tents, blankets, and mosquito netting. In the 21st century, perhaps preparedness for war has taken on a new and additional form: namely, massive amounts of data. While during World War II, the depot called upon the labor of thousands of Philadelphians to contribute to the war effort, today the DVIC occupies a small back corner of this dated factory complex, hidden behind the architecture of an obsolete industrial past, unseen by the vast majority of Philadelphians.

On the other hand, Kindy’s cannot, with its huge sign grasping skyward from the rooftop, be said to be hidden. And so it goes that most of the people who set foot in the old Quartermaster Depot are there to shop for Christmas decorations. Where thousands of Philadelphians once worked to prepare American soldiers for battle, customers now browse rows of the tchotchkes, lights, and animatronic reindeer that will adorn the window displays of so many South Philadelphia homes. In some ways, it’s a refreshingly small and local aspiration for a place so long associated with the nation’s most ambitious undertakings. 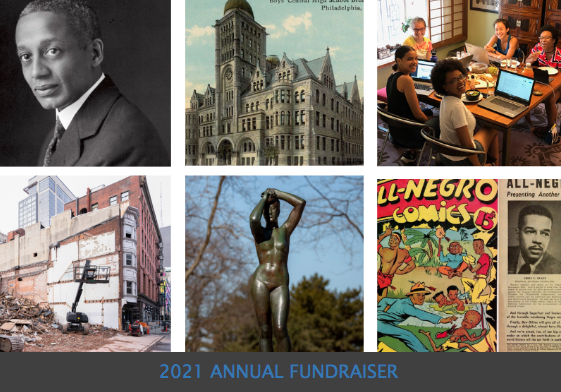