From Handwritten Cards to Data Visualization–Mapping Woodlands Cemetery With GIS 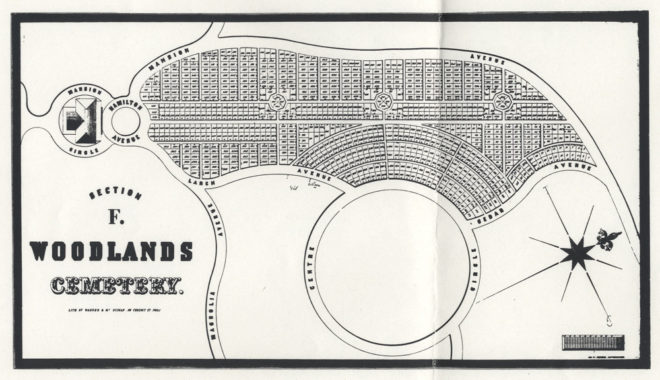 “We’re still an active cemetery. When someone is buried here, they’re added to a handwritten lot card in that cabinet,” said Jessica Baumert, executive director of The Woodlands, pointing to an antique library-style card catalog cabinet. As The Woodlands Cemetery Company approaches its 180th anniversary in 2020, those drawers contain a massive amount of information about life and death in 19th and 20th century Philadelphia. Yet, until recently, there hasn’t been an easy way to extract particular pieces of it, nor to get a big-picture view of the 54 acre property and its 30,000 permanent residents.

In its post-colonial origins as the grand estate of William Hamilton, a wealthy Philadelphian and amateur botanist, The Woodlands first encompassed more than 300 acres along the western shore of the Schuylkill River, including much of the land that went on to become the campuses of the University of Pennsylvania and Drexel University. Hamilton designed extensive gardens in the elaborate horticultural style prevalent at the time among England’s gentry.

After Hamilton, a lifelong bachelor, died in 1813, much of the estate was sold for development. In 1840, The Woodlands Cemetery Company was founded to purchase the mansion and remaining acreage. They established a rural cemetery, a style that became popular in the Victorian era, with park-like landscapes and striking monuments. Despite the “rural” moniker, they were generally close to city centers to encourage public visitors.

That dual purpose of cemetery and public green space continues today, with The Woodlands serving as a popular site for University City residents to stroll, jog, walk dogs and view the trees, plantings, and elaborate monuments. 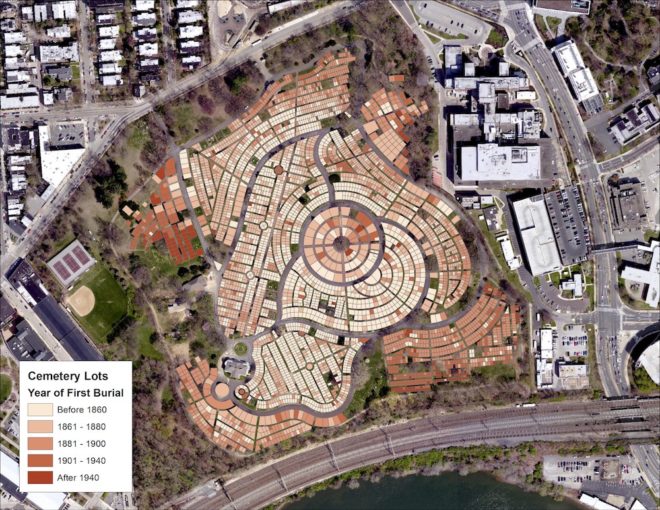 GIS data visualization aids in tracking and interpreting the landscape of the historic cemetery. | Image courtesy of The Woodlands

What is not on view, however, is how a tiny staff of three, along with a cadre of volunteers, tends those two sides of the enterprise. “We have 54 acres and a lot of things to manage, from trees to the 30,000 people who are buried here,” noted Baumert. “It’s overwhelming to think of the amount of data that is.”

Until recently, data management at The Woodlands hadn’t changed much in a century. To locate a specific person, you’d look up the lot card in the file cabinet to learn the area of the cemetery and the lot number and locate it on one of several hand-drawn maps, some dating back to the cemetery’s founding 180 years ago. “We have lots of great maps,” said Baumert. “The original surveyors’ layout was really accurate.”

“It’s what we still use today, these lot cards,” she continued, holding up the card containing information about the cemetery plot of Anthony Joseph Drexel, the founder of Drexel University, with information entered in an elaborate Victorian cursive. “They’ve all been digitized, but we still keep these as our paper record. Several years ago we put them into a database so we can do searches. So if someone calls us and they’re not sure if their great-grandmother is buried here, or if we have genealogy researchers, we can search by first name, last name, death date, etc. “

It might have stopped there, if it wasn’t for a particularly enterprising volunteer. Greg Fisher came to The Woodlands with a background in math and computer science and decided the original, basic database could use some enhancements. “Before I started, the database just had the burial records for all of the individuals,” he recalled. “I added the digitized lot cards to it and linked those to the burial records. So you can go to any person’s entry and the image of the lot card will pop up on the screen. On the lot card, besides the interred person and date of burial, you also have the permit number, depth, age, and if available, usually a contact person and address of the lot owner.” 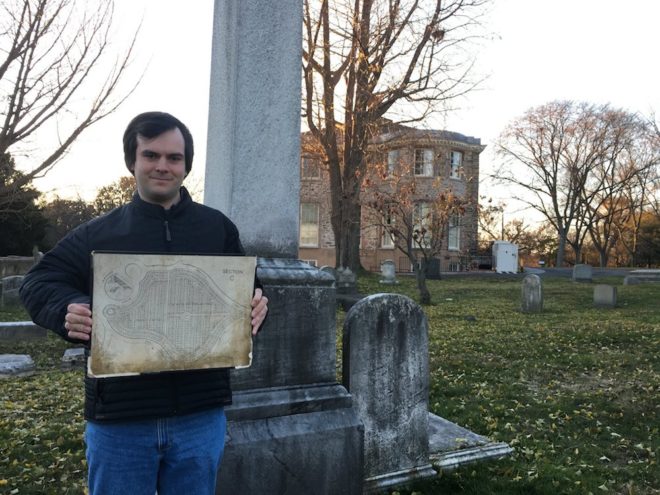 As Fisher delved deeper into augmenting the database, he had an epiphany. “I realized it’s spatial data,” he recalled. “The cemetery is a physical place and to be able to know where someone is buried in the cemetery is an important problem that needs to be solved. So the answer to that was to build a GIS map of the cemetery that allows us to locate graves and use all sorts of data visualization.”

A GIS, or Geographic Information System, application enables users to present data on a map and create interactive queries. They usually start with a base map onto which the data are charted. Luckily, The Woodlands staff was spared the expense of hiring an aerial photographer, as the City of Philadelphia offers high resolution aerial photographs of the city on OpenDataPhilly.org. Fisher was able to accurately overlay their scanned paper maps onto the photographs by matching up landmarks that appeared on both, such as Hamilton’s mansion or large burial monuments.

“What’s useful for mapping is that on the back of most of the cards there’s a diagram of the lot to show who is buried where. Within the lot all of the tombstones and other markers are shaded in,” he explained. “It’s useful to look at a lot in the aerial imagery and then compare this diagram and match it to what’s visible in the photography.”

Fisher continued to add information to the maps to the delight of the staff. “Having all that information in one place was a huge step,” said Robin Rick, facilities and landscape manager. “It’s so useful to be able to find all that information so quickly.” She’s put it to use in managing The Woodlands’ burgeoning Grave Gardeners program, where volunteer gardeners adopt a cradle grave. Popular in the Victorian era, cradle graves consist of a patch of earth surrounded by a headstone, footstone and low side walls, which were planted and tended as a tribute to the deceased. “When we began Grave Gardeners, we thought we’d have maybe 20 participants,” Baumert recalled. “Now, the number is up to 130 volunteers, and it’s become a bit of a beast to manage. So the database and GIS mapping have been essential in managing the program.” An interactive map now shows where current grave gardens are located, plus markers to indicate graves that are available for future gardens. “It helps us in knowing how many people we can accept into the program,” said Baumert. “And every spring, we need to help the gardeners locate their graves, so this should streamline that process,” added Fisher. “And figuring out where to assign new grave gardens,” Rick chimed in. “In the past, I’d base it on my walks around the grounds and what I thought might look interesting. To be able to see the whole cemetery at once, this is a way to streamline that.” 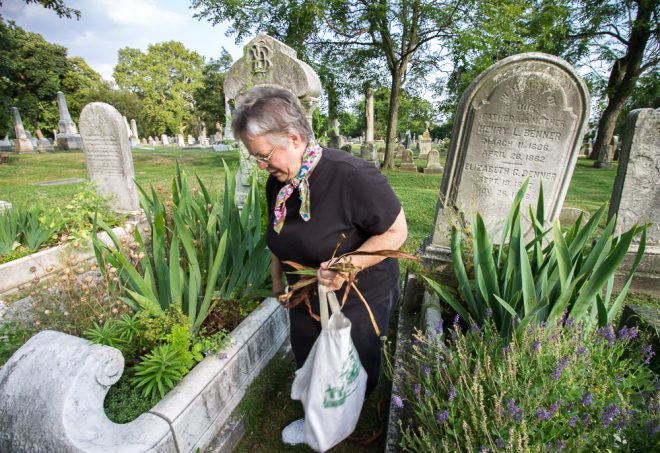 Anita McKelvey, a Grave Gardner at Woodlands Cemetery, tends to her adopted cradle grave in 2017 at the burial plot of Henry D. Benner and his wife Henrietta. | Photo: Michael Bixler

That full view of the grounds will also help in planning future tree planting. Working with a tree survey map of the grounds from the early 2000s, Rick explained how they could integrate it into the new technology. “Then we can overlay the tree map with the lot map to get the big picture, whole cemetery look of what spaces might be available for plantings,” taking in to consideration current and future grave sites. With the database searchable by species, it is also helping them to be strategic in tree care by knowing where to watch for infestations and diseases endemic to certain species.

One of the biggest projects to benefit from the GIS maps is a program to repair and restore headstones in The Woodlands. With 180 years of headstones in varying conditions, there’s a long list waiting for repair services, and the staff is eagerly turning their attention to this facet of the property. “After several years working on restoring the mansion, we’re now moving our preservation efforts outdoors into the cemetery,” explained Baumert. “It’s an expensive proposition to repair headstones. Sometimes we need to hire cranes to lift fallen stones. It’s not something you can bring in just anybody to do, especially with the age of some of our headstones.”

The Woodlands staff uses safety as the main criterion when selecting stones for repair. “A fallen stone is not going anywhere,” Baumert noted. “As a public garden, we try to make sure this place is safe, so the top priority is those headstones in danger of toppling over, especially in areas of heavy use.” All that information is entered into the GIS mapping. “We’re tracking the repairs we’re doing and add data on which headstones need repairs,” said Baumert. 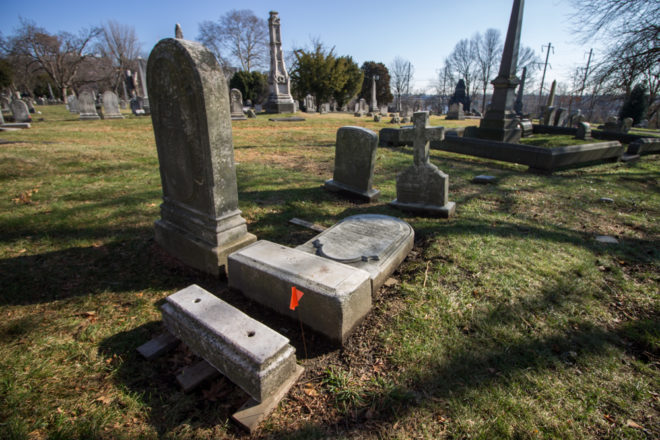 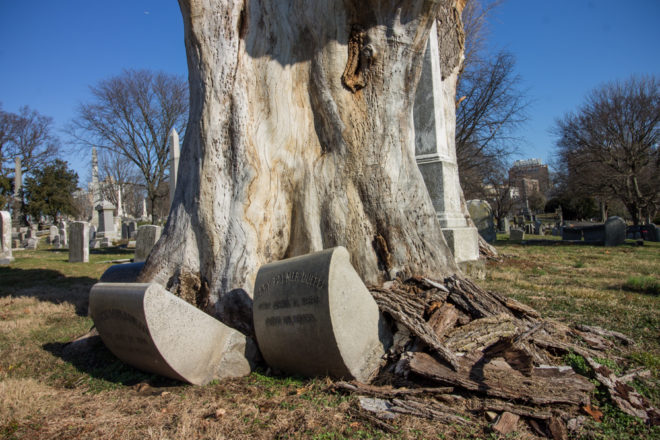 GIS mapping will help staff of The Woodlands with tracking overturned tombstones and monuments for future repair. | Photos: Michael Bixler

To move that project forward, they’ve begun a special fundraising campaign that was given an extra push this past Thanksgiving by swapping out the “Giving Tuesday” of many non-profits in favor of “Tombstone Tuesday.” The campaign includes options for contributing to the repair of a family member’s stone, or that of a notable person, or to the project in general.

In addition to these applications, Rick sees many more possibilities for GIS mapping at The Woodlands. “There are other layers we hope to include in the future, like archaeological information and utility locations, in order to help make decisions.”

Baumert is circumspect when asked if The Woodlands is in the vanguard here. “I don’t know how many cemeteries are using this type of system. It tends to be an industry that’s generally behind the curve on technology. But being able to streamline this really has a huge impact on best management practices, let alone the time it takes to search through a paper file system and then go outside and look.” Still, The Woodlands seems to be enjoying the best of both worlds: the flexibility and added information provided by the GIS mapping, while still preserving the history contained in those evocative handwritten lot cards.