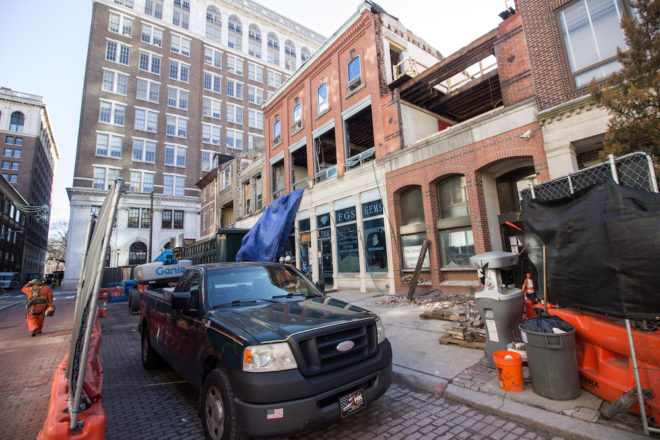 On Thursday, December 5 the Philadelphia Historical Commission’s Committee on Historic Designation will review nominations at their monthly public meeting at 1515 Arch Street in Room 18-029. All recommendations made will go before the Historical Commission in a future public hearing for possible historic designation. This month’s lineup includes the long-awaited Jewelers’ Row Historic District, a couple of large industrial buildings, and a number of West Philadelphia properties nominated by University City Historical Society.

The Jewelers’ Row Historic District, which encompasses an eclectic assemblage of commercial properties along the 700 block of Sansom Street and along 8th Street between Walnut and Chestnut Streets —57 buildings in total—has been remanded to the Committee by the Commission. After multiple continuance requests by counsel representing a majority of property owners within the proposed district, the Committee will determine Thursday whether or not to grant another.

The nomination was submitted by the Preservation Alliance for Greater Philadelphia (PAGP) in March 2017 after suburban real estate developers Toll Brothers revealed plans to demolish four contiguous buildings along the 700 block of Sansom Street. The lack of protection for the area, which falls within the East Center City Commercial Historic District, a National Register District, which affords recognition, but no protection against demolition, has been noted as an oversight by both Mayor Jim Kenney and the PAGP.

In response to the proposed district, which was first reviewed by the Committee in February 2019, property owners requested additional time from the Commission to compile a counter report from an independent architectural historian. The Commission acquiesced and a representative of the property owners provided an update on the report’s status in August and requested another continuance in October. At the November 8 meeting of the Historical Commission, Michael Phillips, the attorney representing the property owners, submitted a letter requesting that the item be pushed back yet again to the Committee’s February 2020 meeting, based on the stipulation that George Thomas, the architectural historian hired to dispute the nomination, would not be able to attend prior to that time.

The letter claimed that Thomas would by tied up by “professional obligations” teaching a course at Harvard’s Graduate School of Design. The course, titled Culture, Conservation and Design, runs one day per week and is held on Monday afternoons, an observation pointed out by Paul Steinke, executive director of the PAGP at the meeting. Steinke requested that the item remain on the agenda for December 5 as the Alliance had already begun lining up witnesses to testify.

Curiously, Thomas was the author of the 1984 National Register of Historic Places nomination for the East Center City Commercial Historic District, which even gives Jewelers’s Row a specific mention. Ironically, two of the buildings called out by Thomas in the nomination for best illustrating the row’s connection to the publishing and jewelry industries—the “handsome polychromed Victorian” at 704 and 706-710 Sansom Street—are currently being demolished by Toll Brothers.

The meeting is likely to draw a sizable crowd, given the strong feelings involved and the general frustration around the mishandling of preserving Jewelers’ Row over the last three years. 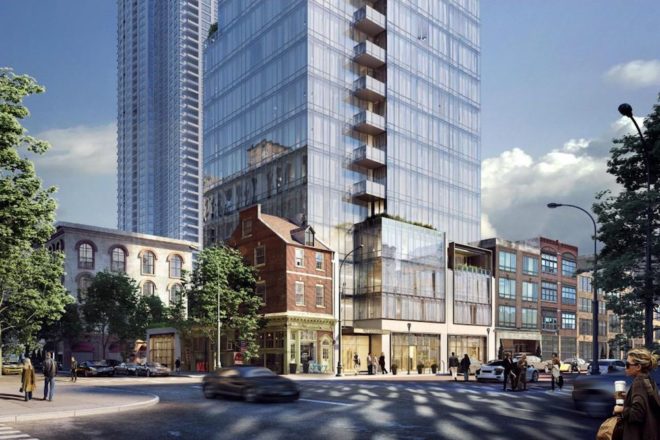 Also on the meeting’s agenda is the E.A. Wright Bank Note Company at 2527-37 North Broad Street, nominated by the Keeping Society of Philadelphia. The six-story structure was constructed in 1913 and built by William Steele & Sons Company using a reinforced concrete system that was relatively new at the time and was once known as “one of the finest buildings in America devoted to the steel and copper plate engraving business.” Rows of boarded up windows detract slightly from the decorative primary facade, which is capped by a substantial bracketed cornice. Vertical piers, inset with contrasting cream-colored architectural terra-cotta flank the facade and emphasize its verticality, rising from a rusticated base. The rest of the building reveals the underlying structural framework, overlaid by a large cement grid infilled with brick masonry and speak to its utilitarian design as a “modern factory.”

The massive industrial complex that formerly housed the Tacony Worsted Mills at 5250 Uruh Avenue has been nominated by Alexander Balloon, director of Tacony Community Development Corporation. Designed and constructed between 1886 and 1887, the mill was known as one of the finest worsted yarn mills in late 19th and early 20th century. The compound consists of seven red brick structures in total, five of which date to the original construction period.

Finally, multiple nominations on the agenda were sponsored by the University City Historical Society, including the Marot-McIlvain residence at 315 and 317 N 33rd Street, considered one of the best examples of the Italianate Villa style homes in Powelton Village, a distinctive row of Tudor style houses designed by architect Wilson Eyre 4501-4507 Spruce Street, complete with a schist corner turret, and the imposing New Tabernacle Baptist Church at 4017-21 Chestnut Street, a Gothic Revival beauty built in 1896.

Other items on the agenda include the Otis Elevator Company Boiler and Engine House at 1045-49 Sarah Street, which was recommended by the Committee back in March, but was remanded at the request of the owner, and compact Italian Renaissance stunner at 1617 Walnut Street, nominated by Commission staff.

The Samuel T. Freeman & Co. Auction House at 1810 Chestnut Street is also recommended by Commission staff, although the owners have submitted a request for continuance until the January 2020 meeting of the Committee. The building was recently purchased by Astoban Investments for $14.3 million, which plans to build a new residential tower on top of the existing building

Full disclosure: The author assisted in unpaid research that contributed to the Jewelers Row Historic District nomination submitted by the Preservation Alliance for Greater Philadelphia.