By the time Election Day 2020 comes around, the nation will have spent the last 12-plus months observing the 150 anniversary of the 15th Amendment, giving voting rights to black men, and the 100 anniversary of the 19th Amendment that extended the right to include women. Due to the contentious and entirely unpredictable nature of American politics these days, next year’s presidential election will undoubtedly be a rollercoaster. Perhaps participation in 2020 will exceed the 64% of registered Philadelphia voters who turned out in 2016. With tomorrow’s important municipal election just hours away, it is worth looking back on a lesser-known chapter in Philadelphia history and the city’s struggle for universal suffrage.

October 10, 1871 was a local election day in Philadelphia. The top of the ticket featured Democrat James Biddle against Republican challenger William Stokley. The incumbent Democratic Party relied on the support of the large Irish American community. Democratic hegemony was threatened by the newly enfranchised black male voters who, during this post-15th Amendment Election Day, were sure to vote for the Republicans aka Abraham Lincoln’s party.

Well before black men were given voting rights, tensions ran deep between the African American and Irish American communities. The Irish saw blacks as their rivals for low-skilled jobs, and the groups lived in proximity throughout pockets of South Philadelphia. Within the ranks of the police force were many Irish Americans who feared their employment would be in jeopardy should the Republican win the mayoral election.

Volunteer fire companies known for gang-like behavior had been replaced earlier that year with a professional fire department, but they remained as social clubs. Some, like the Moya Hose Company in Moyamensing, had strong ties to the Democratic Party. Members of the Irish American community knew that a Republican victory would threaten the patronage jobs distributed by the leader of the Moya Men, “Squire” William McMullen. 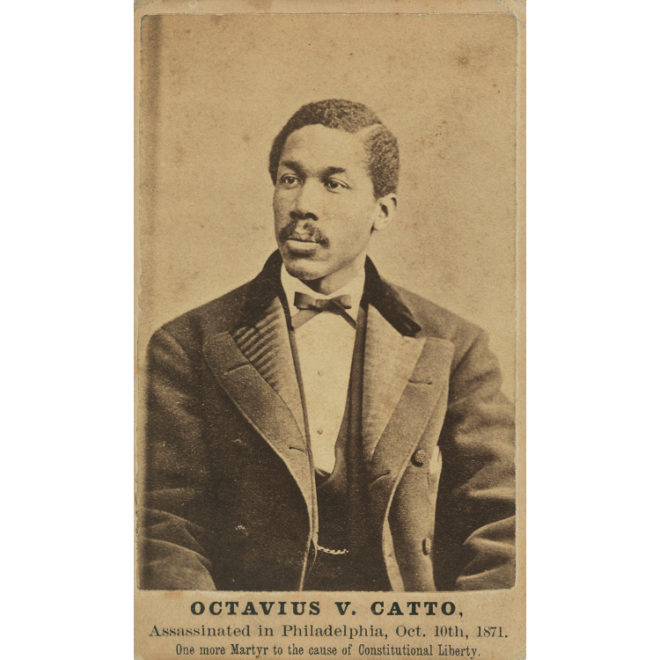 Not surprisingly, the first opportunity for blacks to exercise their hard-won right in choosing a new mayor became a day of chaos in Philadelphia. The morning started badly at a polling station at 6th and Lombard Streets (now Starr Garden) according to one report in the October 11, 1871 edition of the Philadelphia Inquirer. “Early in the morning, several quarrels occurred between the colored voters, the police, and the roughs who had congregated about the window. As the crowd gradually became larger the ill-feeling between the parties was considerably increased by a number of intoxicated persons, who seemed to have no other idea than that of engaging in a free fight.” The article continues, “The colored voters allege that they were unjustly treated by the police and in many cases forced from their proper position in line to make way for white voters. Some white roughs who were present appeared bent on adding fuel to the flame and creating a riot if they could.”

The voters were told to stand in segregated lines to ease the tension, something to which the black voters objected. In the early afternoon, Mayor Daniel Fox arrived on the scene and relative calm was temporarily achieved by roping off the voters from others in the crowd. Once Mayor Fox had returned to his office, however, reports continued to pour in of policemen and others seeking to prevent African Americans from voting. The mayor was summoned to court as judges sought to ensure access to the polls. According to the Inquirer report, “numerous parties hastened excited into court, stating that along Lombard Street from 6th to 11th [Streets] women and children were fleeing unprotected in every direction.” A riot continued along Lombard Street throughout the afternoon.

Simultaneously, similar disturbances occurred nearby at St. Mary’s (now Rodman) and South Streets between 7th and 8th Streets. As described in the Inquirer, “In the streets paving stones and brickbats were flying in all directions and from some of the homes occasionally a stray bullet would come. Every few moments there would be a report of a pistol, a shout or a yell, but it was impossible to tell from whence anything came except from the crowd.”

As the riot eventually spread south to Fitzwater Street, citizens continued to come to court to complain about police violence against black voters. Arrest warrants were issued for a few officers, but then quickly rescinded, as authorities concluded that a full complement of police would be needed to restore order. In retrospect, this seems like an odd decision given that police, both uniformed and plainclothes, were among the worst offenders in perpetuating the violence and voter intimidation.

Election Day 1871 is best known for the assassination of scholar, civil rights activist, community leader, Civil War recruiter, Pennsylvania National Guardsman, athlete, and voting rights crusader Octavius Valentine Catto. In addition to Catto, two other black men were shot and killed that day, and another later died of gunshot wounds. Scores were injured. A depiction of the day’s events and Catto’s assassination can be seen below.

Frank Kelly, the man who shot Catto and at least one other black man that day, was able to slip away. He was a member of the Moya Hose Company and likely had police assistance in his escape. When captured in Chicago several years later, he was brought back to face trial. In spite of more than 20 black and white eyewitnesses who identified Kelly in court, he was acquitted by an all-white jury.

On that same turbulent Election Day, a woman named Carrie S. Burnham attempted to vote. Accompanied by her future husband and carrying documents indicating that she was a United States citizen, a Philadelphia resident, and a taxpayer, she attempted to cast her ballot at a polling station in a liquor store at Broad and Wood Streets. Burnham was turned away.

On a different day, Burnham’s bold effort might have been headline news. With all of the violence and death of October 10, 1871, however, her story was relegated to the final paragraphs of a multi-columned page describing Election Day. She sued and took her case all the way to the Pennsylvania Supreme Court. Although Burnham lost her case, she published her lengthy argument in a book dedicated to her mother and to “the women of Pennsylvania, and all women who desire to be free; and also, all the men, possessed of sufficient noble manhood to bear equality.”

Earlier in 1871, Burnham, who already held a medical degree, had applied to the University of Pennsylvania Law School but was rejected because of her sex. She attempted to attend lectures, but was barred from this as well. She studied independently but was prohibited from taking the bar exam. 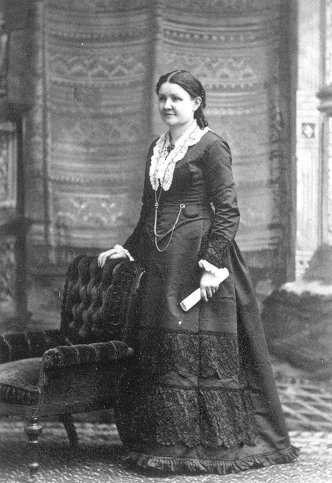 In 1881, after ten years of effort, she became the first female law student at the University of Pennsylvania. By then she had married her Election Day escort, Damon Kilgore. She finished law school in 1883 and, after petitioning the General Assembly several times, in 1866 she was finally allowed to take the Pennsylvania bar exam. In 1888, she took over her husband’s law practice following his death. In 1890 she was admitted to argue before the United States Supreme Court.

In 2013, alumnae of Penn Law School named the Kilgore Society in her honor. This networking and mutual support group for female attorneys is unlike anything that would have been available to Kilgore herself. During most of her years in practice, she was the only female lawyer in the state. Carrie Burnham Kilgore died in 1909, 11 years too early to see women finally get the vote.

And what were the results of the election of 1871? In spite of the violent attempts to suppress the black vote, William Stokley was elected to his first of three terms as mayor on the Republican ticket. While Carrie Burnham Kilgore remains an obscure figure, in 2018 voting rights martyr Octavius Catto was belatedly recognized with a large memorial installation on the south side of City Hall.

Kilgore, Catto, and countless others made enormous sacrifices to expand the franchise. Please vote on Tuesday. We are all better off when more of us take advantage of the rights that others fought so hard to gain.