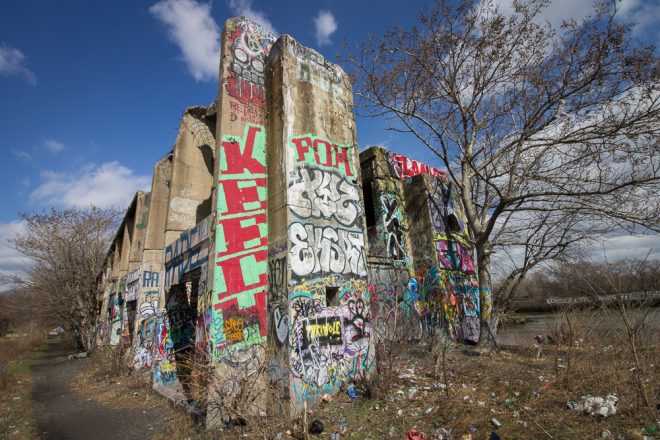 Pier 18 aka Graffiti Pier in Olde Richmond is one of Philly’s most popular abandoned destinations. The Delaware River Waterfront Corporation plans to transform the old coal pier into a legitimate public park by 2024. | Photo: Michael Bixler

Of all the vacant and moldering piers along Philadelphia’s Delaware River waterfront, Pier 18 is easily the most iconoclastic. Better known as Graffiti Pier, it boasts its own Atlas Obscura entry and is included in lists of “Four Unusual Parks in Philadelphia” and “12 Unusual Parks in Pennsylvania” by the online compendium “The World’s Wonders and Curiosities.” That’s owing to the work of countless graffiti artists who have covered the concrete pillars of a former Reading Railroad coal-loading dock with a riot of street art, surrounded by an overgrowth of weed trees and grassland, untended since current owner Conrail closed the site in 1991.

In addition to being beloved by makers and fans of graffiti art, it’s also a favorite spot for residents of Port Richmond and Fishtown seeking an outdoor space to walk. On the downside, Graffiti Pier is also popular with dirt bikers and illegal dumpers of construction waste. Seemingly no one has been deterred by the locked gate across the main path, the no trespassing signs, or the stepped-up patrols by the Philadelphia Police Department that began about a year ago.

Now, the site is on the radar of the Delaware River Waterfront Corporation (DRWC), the non-profit charged with developing the waterfront “to provide a benefit to all of the citizens and visitors of the city.” For Graffiti Pier, the first step in that process happens on Friday, November 1 at Cherry Street Pier, when a public meeting will be convened to gather community input. The Port Richmond Waterfront & Graffiti Pier Planning Study project got underway earlier this year when the DRWC entered into a memorandum of understanding with Conrail, to acquire roughly six of the more than 150 acres of land and water rights the company holds along the waterfront.  That area includes Graffiti Pier.

At the northernmost limits of their planning area, the DRWC sees the Port Richmond and Olde Richmond neighborhoods as greatly underserved. “There is no public waterfront park between Penn Treaty Park at Columbia Avenue and Pulaski Park at Allegheny Avenue,” noted Karen Thompson, DRWC’s Director of Planning. “We included Graffiti Park in the master plan, within Cumberland Park, one of our planned ‘half-mile parks,’” she said, referencing DRWC’s plan to have a public space every half-mile along the waterfront of the central Delaware River.

The DRWC recently named a firm out of New York, Studio Zewde, to conduct feasibility studies. Funds provided by the William Penn Foundation will cover the studies and take the project through the planning and design concept phase. “Then we’ll fundraise to complete the design and build it,” said Thompson. 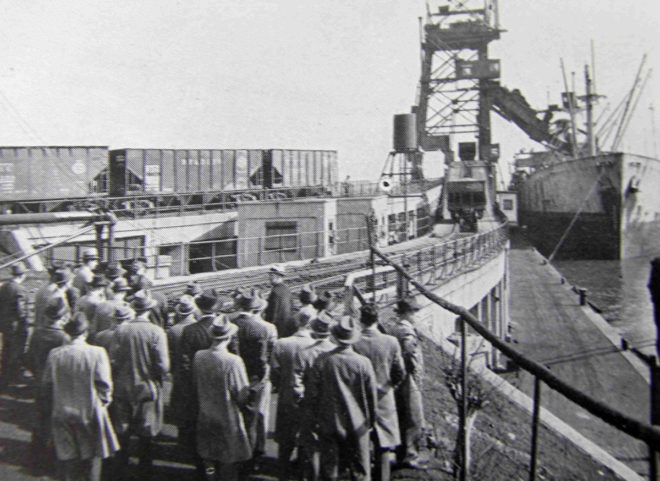 Sara Zewde, founding principal of Studio Zewde, said her firm will be conducting the public engagement side of the feasibility study. She explained they’re engaging subcontractors to assess the structure and condition of the pier and the coal chute and evaluate the soil of the tract.

Of course, some see all these formal plans and studies as anathema to the outlaw character of Graffiti Pier. “That’s the big challenge,” acknowledged Zewde. “The nature of street art is, it’s about transgression. So what happens when it’s sanctioned?” Thompson said at this point, they’re not sure if they will permit and encourage more graffiti or just preserve what’s there.

In either case, Zewde said there will still be a tension between the current secretive feel of Graffiti Pier and the planned park open to the public. “That’s the design challenge,” she acknowledged.  “How can we keep the special atmosphere while making it accessible? How can we avoid upsetting the ecosystem?”

Another threat to Graffiti Pier’s secretive feel will soon be happening right next door. A 1,100 unit residential development is proposed for a 25 acre parcel along Beach Street, just south of Graffiti Pier, which had been the site of the Cramp and Sons Shipbuilding Company. Starting out as a builder of clipper ships in 1830, through the advent of iron sided warships in the Civil War and the two World Wars, the firm ultimately employed 18,000 workers in the 1940s. At the turn of the last century it was like the Baldwin Locomotive Works on North Broad Street, the largest establishment in its industry in America. 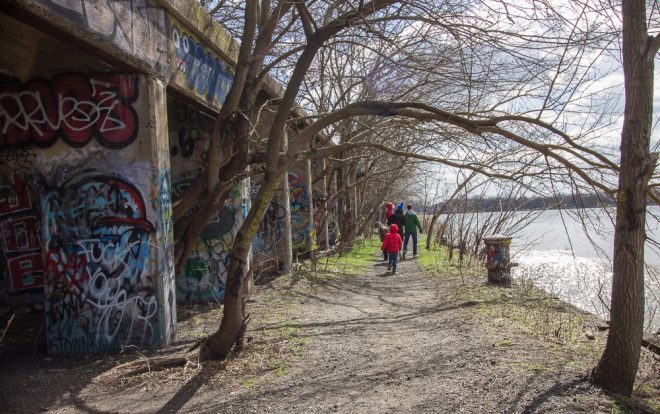 A family of five sets off to explore Graffiti Pier on a Saturday morning in 2017 despite gusty winds and 40 degree temperatures. | Photo: Michael Bixler

“We’re hoping it’ll be interactive,” said the DRWC’s Thompson. “We want to bring a cross section of people–those who know the pier and others who don’t. We want the neighborhood to come together on an idea.” In order to include graffiti artists, Zewde explained it took a web-like extra level of making connections, first setting up an advisory council of artists, people involved in the arts scene, and neighbors, then reaching out to their networks, who in turn reached out further to their own networks.

Thompson noted they’re planning to hold at least two more public events, ideally in the neighborhood itself. There will also be an online component for public input.

For those who resist the idea of changing anything about Graffiti Pier, Zewde points out that, like the entire Delaware River waterfront, some kind of change is inevitable. “Regardless of whether it becomes a public park or not, Graffiti Pier is under threat from climate change. A park might be a chance to save it.”