Businesses don’t often leap across intersections or move from building to building on the same block. That is, unless they are located at 18th and Spruce Streets, where an intersection has readjusted itself every few decades since the 18th century. 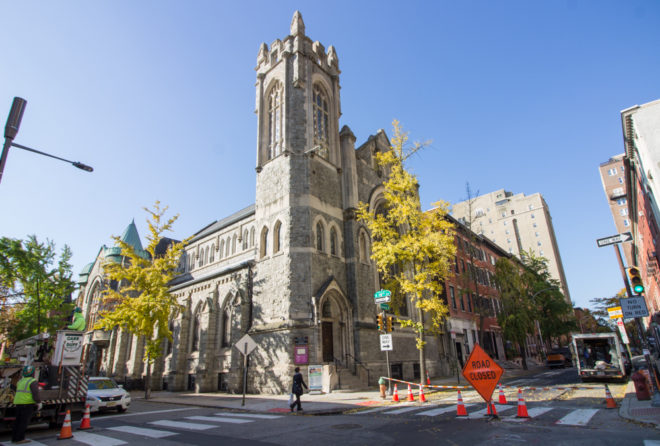 The Methodist Episcopal Church of the Covenant at 18th and Spruce was built in 1894. The congregation of Beth Zion Beth Israel bought the church 60 years later and repurposed it for their synagogue. | Photo: Michael Bixler

The earliest deed for the southeast corner building at 18th and Spruce is dated 1765. From then through the 1920s it was the residence of the city’s elite with names straight out of Philadelphia’s social register. The Wetherills, descendants of a chemical mogul, lived there from 1867 to 1887. It was then sold to a Wanamaker.

During the Victorian Era, where one prayed conveyed one’s position in society. In 1894, the first four houses on the southwest corner were demolished to make way for the Methodist Episcopal Church of the Covenant, designed by Thomas Preston Lonsdale. This towering neo-Gothic monument of stone and stained glass reflected the prestige of the neighborhood. A prolific designer of Philadelphia churches, Lonsdale also designed Roman Catholic High School at Broad and Vine Streets, College Hall at Temple University, and American Life Insurance Building at 4th and Walnut Streets. 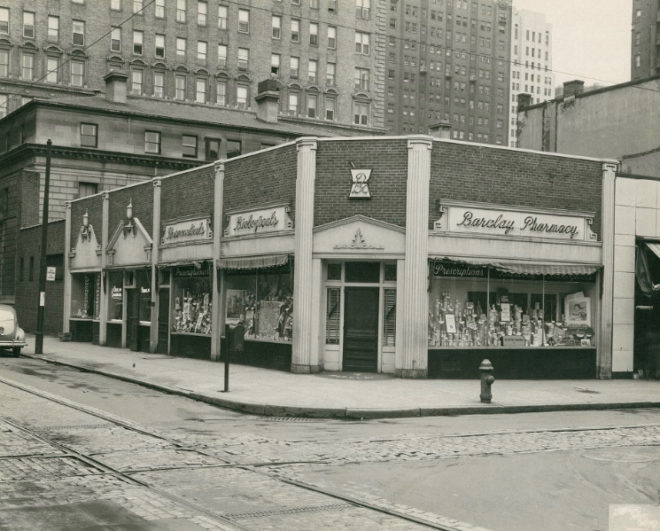 Barclay Pharmacy set up shop on the northeast corner of 18th and Spruce in the 1930s. The business moved across the street in 1959. | Image courtesy of the Athenaeum of Philadelphia

By the 1920s, Philly’s blue bloods were abandoning their lavish Spruce Street townhomes for the Main Line. From the 1880s to the 1920s, a tidal wave of immigration had dramatically changed the city’s character. Ironically, it wasn’t an influx of poor immigrants that sent the elite of 18th and Spruce scrambling. It was the ascent of prosperous Jews. In 1924, antique dealer Arthur Sussel purchased the former home of the Wanamakers and Wetherills at 1736 Spruce Street. He turned the first floor into a shop and lived on the upper floors with his family.

In the 1930s, several private residences on the northeast corner were demolished. My pharmacist and cousin, Bernard Friedman, had the Barclay Pharmacy custom built to his design on that corner. Adjacent to the pharmacy was an A&P grocery store in the space that later became Great Scott Market and is now Rittenhouse Market. “At the time, there was a pharmacy on every corner of Spruce Street. To compete, my father kept his store opened from 6:30 am to midnight,” said Bernard’s son Russell Friedman. 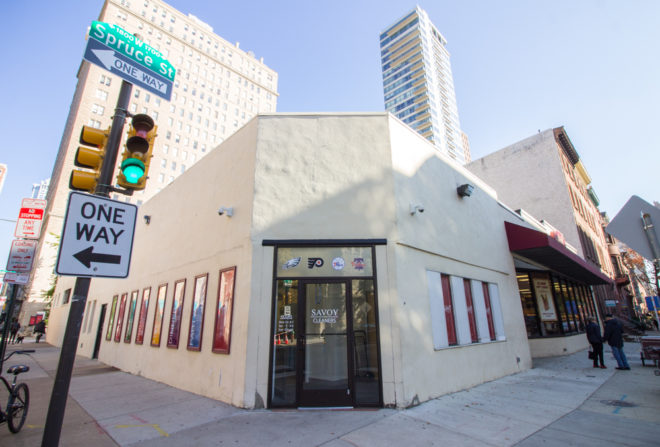 With the Methodist population fleeing, the Church of the Covenant was sold first to Seventh Day Adventists in 1941 and then to a Jewish congregation, Beth Zion Beth Israel, in 1954. A conservative synagogue, the former church was redesigned by Philadelphia architect Beryl Price. Price also designed the Jewish Publication Society at 222 N. 15th Street, the Rebecca Gratz Club at 532-36 Spruce Street, and Harcum Junior College. Sussel’s wife, Bea, was a member of the congregation and gifted the synagogue its beautiful stained glass windows. 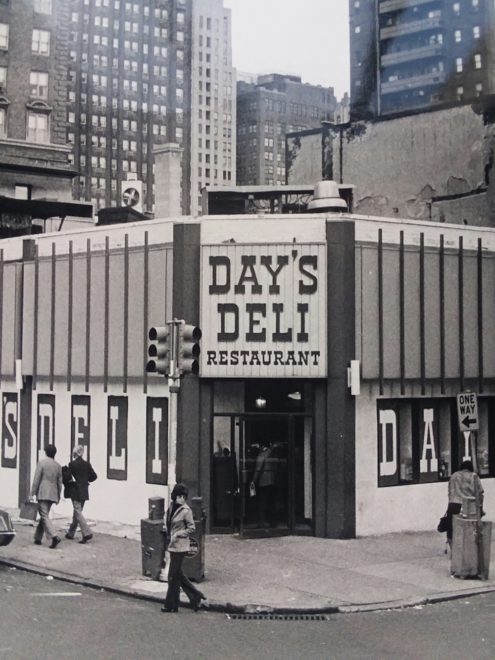 Day’s Deli at 1801 Spruce Street. The bar and restaurant relocated from the northwest corner to the northeast corner of 18th and Spruce in 1959. Pictured here is Day’s in 1974. | Image courtesy of the Free Library of Philadelphia

Day’s Deli first opened on the northwest corner in the space that is now occupied by Starbucks. When the Barclay Pharmacy relocated in 1959 from the northeast to the southeast corner, Day’s moved to the larger space the drugstore had vacated. With the move, the deli’s business exploded. By the 1960s, Day’s was a late night hangout. It didn’t hurt that they had a liquor license. Customers were written up daily in the social columns and police blotters.

Meanwhile, the Harvey House, a popular restaurant on South Broad Street, opened a location on the northwest corner where Day’s had originally been, but it closed within five years. “Leonard Nimoy once bought me a cup of tea there,” said Center City resident Linda Spikol. “It had a clubby backroom full of bad boys and rich Jewish guys who never seemed to have to work for a living. It was a very sexy urban moment for a time.”

Not long after leasing the first floor of Sussel’s property on the southeast corner for his pharmacy, Bernard Friedman bought the entire building. He turned the upper floors into apartments which, by the 1960s, was common practice for the former private townhouses of Spruce Street.

Back to the Future 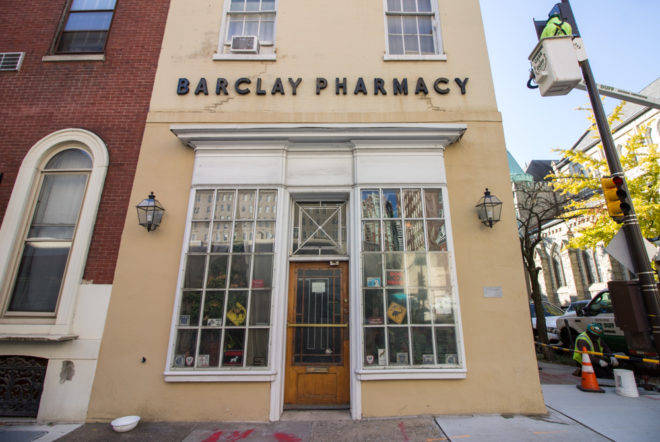 If you want to know what the Barclay Pharmacy was like in the 1970s, just go there today. You’ll be greeted by Tico, a white lab with a sweet and gentle demeanor. Tico’s owner, pharmacist Russell Friedman, hasn’t changed anything since he took over his father’s business in 1974. A lovely mural on the east wall by Philadelphia artist Kenton Warne Hudson represents 48 drugs and plants used in medicinal compounds. Vintage Max Factor Pancake Compacts, tortoise shell combs, and mid-century greeting cards are still on the shelves. Not to be mistaken for CVS, the Barclay Pharmacy specializes in dermatological compounding and doesn’t accept health insurance or credit cards. 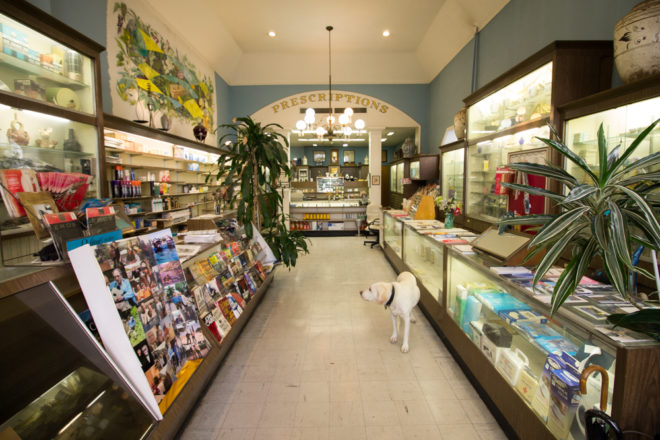 Day’s Deli closed in the 1980s after a change in management. Rumor is the profits went up the new owner’s nose. The Great Scot Market next door to Day’s expanded, taking over the entire northeast corner. Meanwhile, the northwest corner was a series of banks until it became Savoy Cleaners. Eventually, the cleaners got the same itch for more space that had struck every previous tenant of that corner and it made the leap across to the northeast corner. Given the intersection’s history, it’s only a matter of time before Starbuck’s bolts across 18th Street for a change of scenery.