After decades of bemoaning the inaccessibility of Philadelphia’s Delaware River waterfront, several projects are springing into action to bring more amenities and people to the area. Along a four mile stretch, from Cumberland Street in Port Richmond to Tasker Street in Pennsport, there are development proposals in various stages of realization.

On October 31, the Delaware River Waterfront Corporation (DRWC), the non-profit charged with coordinating the development of the waterfront on behalf of the City, issued a Request for Proposals (RFP) for mixed-use developments on two parcels between Columbus Boulevard and the river at Penns Landing. The first, referred to as the “Market Street Site,” is approximately seven and a half acres between Market and Chestnut Streets. The southernmost site, the “Marina Basin Site,” consists of about four acres between Spruce and Lombard Streets.

Both parcels are zoned for mixed-use development, and the DRWC is aiming for “a dense, live-work-play environment” on each. But, according to the Master Plan for the Central Delaware, which was adopted in 2012 and a subsequent Penns Landing feasibility study, the two sites will differ in the scale of development. The vision for the Marina Basin Site consists of low-to mid-rise residences, while development on the Market Street Site will go higher, with residential towers interspersed among smaller townhomes.

Lizzie Woods, vice president for planning and capital programs of the DRWC, said organization officials are looking to define “high rise” as keeping with the 100-foot height limit specified in the Central Delaware Overlay (CDO) of the Master Plan for the Central Delaware. However, she noted that if developers opted to offer all the items that yielded height bonuses, such as public space and affordable units, the limit would be 244 feet.

While not indicating specific numbers or percentages in the RFP, the DRWC does mention it wants to see plans that include some affordable housing. “We’ve prioritized a goal of attaining a mix of income levels,” Woods affirmed. Yet, it’s not clear what “affordable” might mean, when the market analysis included in the RFP points out that “in the 19106 zip code [in which the parcels lie], home values now exceed $700,000 on average.”

Acknowledging that the sites are located in the flood plain of the river, the DRWC anticipates that successful proposals will address the impact of rising sea levels. “We are looking for developers to be responsive to the regulations, but also be forward-looking regarding site design as it relates to the future impact of climate change,” Woods said.

After another successful summer season at Spruce Harbor Park, the question arises of what will become of that popular oasis as the developments get underway. “We’ll do everything in our power to keep Spruce Harbor Park open during construction,” Woods said. “It’s one of our signature properties along the waterfront.”

A long-standing complaint about the Delaware River waterfront is the barrier created by I-95 and Columbus Boulevard that separates it from Old City and Society Hill. As a remedy, the Penn’s Landing Feasibility Study recommended covering the two roads with a park to connect the neighborhoods to the waterfront. 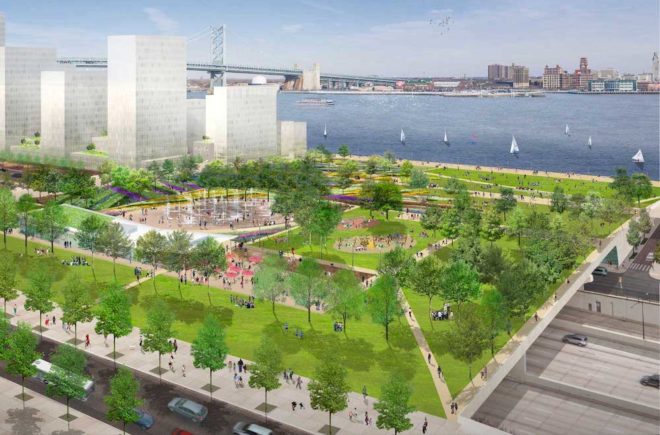 That is another project that will soon be underway, as the design team for Penn’s Landing Park completes its preliminary engineering work and moves into the final design phase. Karen Thompson, the DRWC’s director of planning, said construction will begin in 2021 and be completed by 2024. The DRWC held a public meeting in October and are still accepting questions and comments through the project’s website.

More public input about the waterfront will be heard next week, but this time of a more contentious nature. The developer Bart Blatstein is back with revised plans for a Super Wawa with gas pumps and 50 parking spaces at Tasker Street and Columbus Boulevard, which will be considered at a Zoning Board of Adjustment (ZBA) hearing on November 12. The ZBA, which ordinarily takes on about 40 appeals per meeting, originally scheduled this one for September, but moved the hearing to a date all its own when it became apparent that the large number of attendees and speakers anticipated would require a lot of time.

The site is part of a large tract where Foxwoods Casino Philadelphia had once been planned. It is also adjacent to the planned South Philadelphia Wetlands Park project, which will encompass Piers 64, 67, and 70, as well as the already existing park at Pier 68.

Pennsport Civic Association, the DRWC, and the Central Delaware Advocacy Group, a coalition of civic associations and non-profit organizations, all oppose the project, saying it would interfere with all the efforts to connect the central portion of the waterfront to the adjoining neighborhoods and make it accessible for pedestrians. Thompson said the DRWC plans to testify at the hearing.

Blatstein has found several loopholes to try to force the project forward despite significant opposition. Under the CDO, a gas station entrance is not allowed on Columbus Boulevard or river access streets, so the developer’s team subdivided the parcel to create a sliver of land along Columbus Boulevard that technically is not part of the application. The gas station now fronts Tasker Street, which was not designated a river access street at the time the application was submitted, just one day before the street’s status was changed. To top it off, Blatstein has an easement on the newly-created strip of land which will allow cars to enter the gas station from Columbus Boulevard.

The project goes before the ZBA on November 12 as a special exemption, which is much easier to obtain than a zoning variance.

The waterfront is in transition north of Penn’s Landing too. DRWC’s Thompson reports that the developers of the Festival Pier site at Spring Garden Street, Jefferson Apartment Group and Haverford Properties, completed initial substructure repairs this summer and are now working on a conceptual plan for the mixed-use project of apartments and retail. And near the CDO’s northern terminus, a future park at Pier 18 aka Graffiti Pier is currently the subject of a feasibility study and community input.