There’s No Place Like Home: Unlocking a Door to the Past on Spruce Street 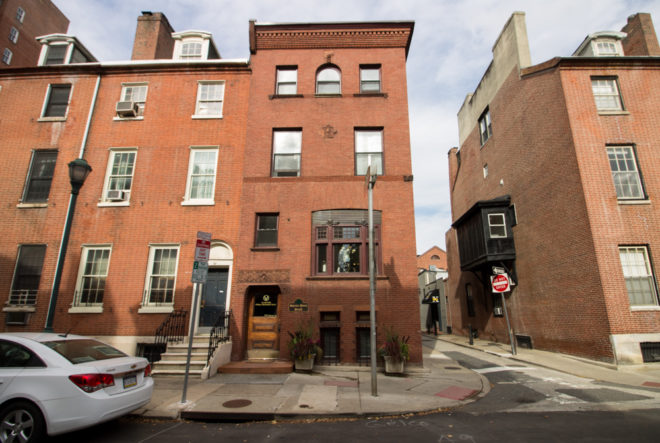 When my grandparents’ house at 1219 Spruce Street was sold in the 1970s I thought a door to my youth had been locked forever. I had spent much of my childhood there, drinking endless cups of tea with my grandmother in a dining room of impossible grandeur–beamed ceilings, leaded windows, and a Delft tile fireplace with carved wooden heads of Zeus and Apollo. On summer nights, music would drift up from the Venture Inn next door through my bedroom window.

The house lingered in my peripheral vision for decades, as it passed through several hands and from residential to commercial use. When I learned that the current owner, attorney Michael T. van der Veen, had a passion for historic preservation I decided to contact him. From the outside, the building looks much the same as in my youth, except for the gold leaf script etched on the front door, “Ven Der Veen, O’Neil, Hartshorn, Levin.” The criminal and personal injury law firm was previously located in Northeast Philadelphia before moving to Spruce Street.

Van der Veen kindly gave me a comprehensive tour, from top to bottom, pointing out changes he had made and others still in the works. I was immediately struck by his enthusiasm for bringing out the property’s “good bones,” while respecting its original architectural features. He had replaced wooden pocket shutters in the front parlor, which now served as a meeting room. The reception area, which had been my grandparents’ living room, was now devoid of their stuffy Edwardian furniture, but its abundant woodwork, leaded windows, and elegant marble fireplace remained.

The house was not in great shape when van der Veen bought it in 2014. It had been listed on the local register of historic places by the Philadelphia Historical Commission two years earlier, which meant he had to follow very stringent rules in making repairs. “When I replaced the windows, each had to be made of solid mahogany,” he said. “I personally restored the tiger oak floor boards.” 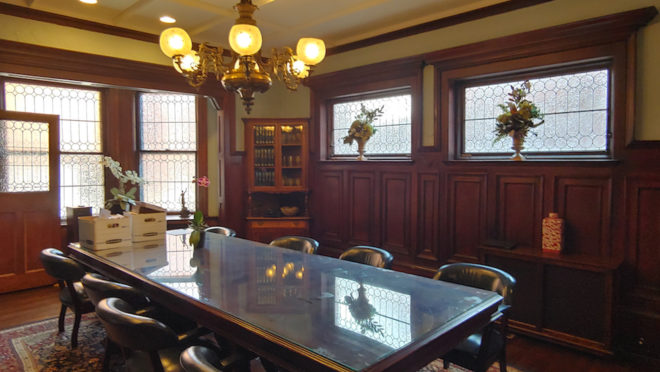 Attorney Michael T. van der Veen purchased the Spruce Street home in 2014 and converted it into an office for his law firm. The dining room now serves as a conference room. | Photo: Howard Silverman

Van der Veen’s diligent efforts are obvious throughout the house. The basement, which had served as a kitchen and laundry when it was first built, is now a well-lit series of office spaces with a wall exposing the original foundation and brick, creating the illusion of an archeological dig. He points to a basement window which, at one time, had been a coal chute.

Standing in his spacious second floor office with a large bay window overlooking Camac Street, van der Veen noted that on cold winter days he burns wood in the glazed tile fireplace. It had never occurred to me that any of the fireplaces were functional.

In another section of the second floor, young lawyers plucked away at computers in a room that had held my crib. The third floor, which had been a warren of small rooms my grandparents rented out to Jefferson University medical students, has been transformed into more office space for the law firm’s 25-member staff.

Van der Veen generously shared with me his extensive research of the property, including a doctoral dissertation by a University of Pennsylvania student and a nomination for historic designation by the Philadelphia Historical Commission.

Thomas M. Etting commissioned Philadelphia architect Frank Miles Day in the late 1800s to design a new home for himself and his bride. An admiralty lawyer, politician, author, and civic leader, Etting was a descendant of an illustrious Jewish family that had served in the Continental Army.

The Historical Commission’s nomination vividly describes 1219 Spruce Street as “one of the few Romanesque Revival style residences designed by Day. Built of brick with brownstone trim, there is an elegant terra cotta ornamentation above the front door. A first floor bay window is capped by a copper cornice with a corbelled design and two small shields.  The third floor showcases a grotesque carving surrounded by arabesque decoration.” 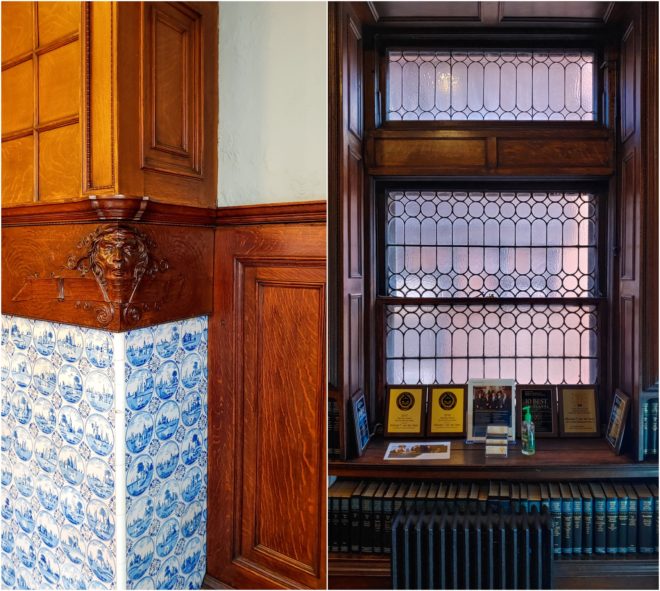 At the time, Day was among a group of young architects who rejected the old guard architects of the day like Frank Furness. After graduating University of Pennsylvania’s School of Architecture in 1883, he studied at the Royal Institute of British Architects in London and traveled extensively in France, German, and Italy. Sketchbooks from his travels, exhibited at an annual Pennsylvania Academy of Fine Arts (PAFA) show, launched Day’s career.

In 1890, the year Day designed 1219 Spruce Street, he joined the architecture faculty at Penn and began teaching perspective at PAFA. His best known surviving buildings in Philadelphia include Houston Hall on Penn’s campus and the American Baptist Publication Society at 1420-1422 Chestnut Street. Day also designed buildings on the campuses of Yale, Cornell, Princeton, Penn State, and other universities. He was the national president of the American Institute of Architects and the founding editor of House & Garden magazine.

In 1920, after the death of his wife, Etting sold the property to the Alumni Association of Cornell University. An article published in the Cornell Alumni News that year described the building as “a luxurious club house” offering “cheerful living quarters for ten.” 1920 marked the start of Prohibition, during which drinking in public was forbidden, but permitted in private clubs. I imagine the Cornell Club was no exception.

I knew my grandparents bought the house from the Cornell Club in 1932, but had no idea of its previous history. According to van der Veen, the earliest record of the property dates back to 1791. It was originally a one-level wooden structure that sold wheat and hay for livestock. This makes sense when you consider that the old Venture Inn next door had been a horse stable.

Having finally learned the full history of the my family’s old home on Spruce Street, I am heartened by the synchronicity. A stately mansion built for a prominent 19th century attorney is now safe in the hands of a 21st century attorney. One who honors its architectural heritage and doesn’t mind putting in overtime to return it to its original splendor.