This October marks the 13th year of Archives Month. Led by the National Archives under the banner of American Archives Month, the initiative, launched in 2006, aims to raise public awareness and appreciation of historical records and to give a glimpse at the contents of special collections that aren’t usually on view for the public.

Across the country, state archives, historical organizations, libraries, colleges, and other repositories plan special events and exhibitions. Locally, it is coordinated by the Delaware Valley Archivists Group, a volunteer organization of more than 200 archivists and archives specialists in the region. Although it’s called Archives Month Philly, this year’s participants range from central New Jersey down to Newark, Delaware, and out into Chester County. 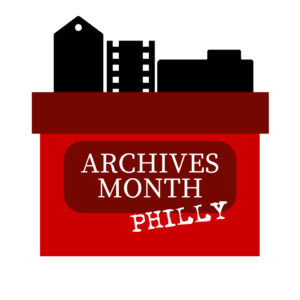 Even in a city bursting with history like Philadelphia, archives are often like hidden treasure. For starters, the organizers of Archives Month Philly want the public to understand the difference between an archive and a library. While librarians work with books, “Archivists are working with all kinds of unpublished materials. They describe it, catalog it, and preserve it,” explained Kelsey Duinkerken, who manages the Special Collections and Digital Services department of Scott Memorial Library at Thomas Jefferson University.

Collections can contain unique materials of almost any kind, like the Science History Institute on Chestnut Street where Hillary Kativa is chief curator of Audiovisual and Digital Collections for the Othmer Library of Chemical History. “We have a little bit of everything,” she said. “Chemists’ notebooks, personal correspondence of Nobel laureates, historic photos, and documentation of the creation of well-known products like Duracell batteries and Saran Wrap.” For the latter, she noted a 1954 in-house training film produced by Dow Chemical to help their sales force transition Saran Wrap from its original military use–wrapping munitions for transport–into a household product.

Participants in this year’s Archives Week Philly run the gamut from big, well-known collections like the Rare Books Department of the Free Library of Philadelphia and the Philadelphia City Archives, to the lesser-known, like the Redemptorist Archives at the Shrine of St. John Neumann, a Catholic Church congregation dedicated to missionary work, and the Stoogeum, the “world’s first and largest museum of Three Stooges memorabilia.”

Many of the tours, workshops, exhibits, and lectures focus on the work of archivists. “So many people don’t know what we do, how we’re different from librarians,” admitted Duinkerken. 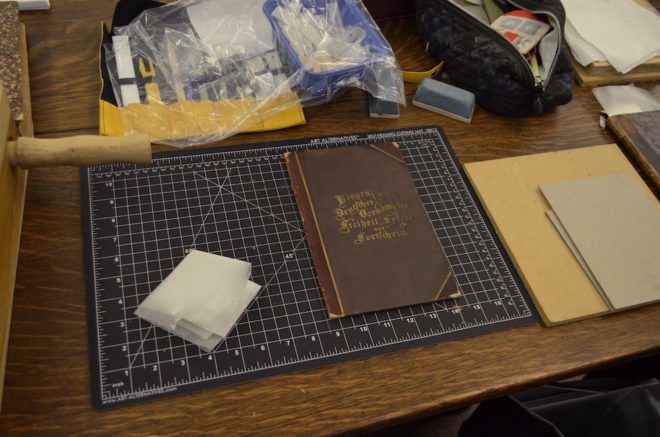 On October 22, the German Society of Pennsylvania (GSP) will host a presentation by Philadelphia-based artist and book restorer Ruth Scott Blackson. “We have a large collection of old books in sad shape,” said librarian Bettina Hess. “Most are 19th century volumes with leather bindings that were housed in our library that lacked climate control until about 20 years ago.” Blackson will demonstrate some of the processes she employs, such as fixing broken bindings, repairing pages, or restoring gold stamping.

The event is part of GSP’s Adopt a Rare Book program, which began in 2017 to mark the library’s 100th anniversary. Each year, Hess selects several dozen books in need of restoration and publishes a catalog through which donors can select a title and contribute the cost of the work. This year’s catalog focuses on books about Alexander von Humboldt to commemorate the 250th anniversary of the birth of the Prussian polymath, geographer, and naturalist.

At the University of Delaware, the exhibition From Thought into Print uses archival materials to illustrate the development of a book from the author’s initial manuscript, through the editorial and design processes, to the final publication. “It’s almost like archaeology, to show the evolution from manuscript to print,” said Rebecca Johnson Melvin, manuscripts librarian in the Special Collections and Museums at the university’s library. 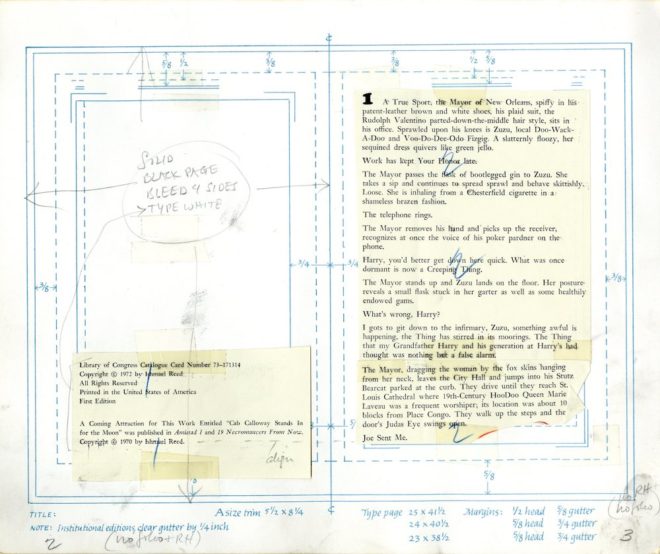 An original paste up of Ishmael Reed’s novel, Mumbo Jumbo, from the author’s typed manuscript. | Image courtesy of Special Collections and Museums, University of Delaware

A companion workshop, “Identifying Literary Manuscripts,” on October 12 will demonstrate the work archivists do when receiving a writer’s collection. “We have to identify what we’re seeing among galleys and revisions,” explained Melvin. “When we get a collection, it’s not necessarily in order, so we’re trying to chart the progression of the work.”

In the case of Ishmael Reed’s novel, Mumbo Jumbo, the materials on display give a unique look into the author’s creative process. After the submission of a typed manuscript, his editor at Doubleday returned a galley full of grammatical and stylistic changes. In reply, Reed submitted his own rules of style to the editor to demonstrate what he intended in the original manuscript.

Other parts of the exhibit chart the fact-checking correspondence in the publication process for Truman Capote’s In Cold Blood and the development of Ian Hamilton’s biography of J. D. Salinger, including an advance reading copy of the book, which was suppressed by the latter’s lawsuit from ultimately being published. 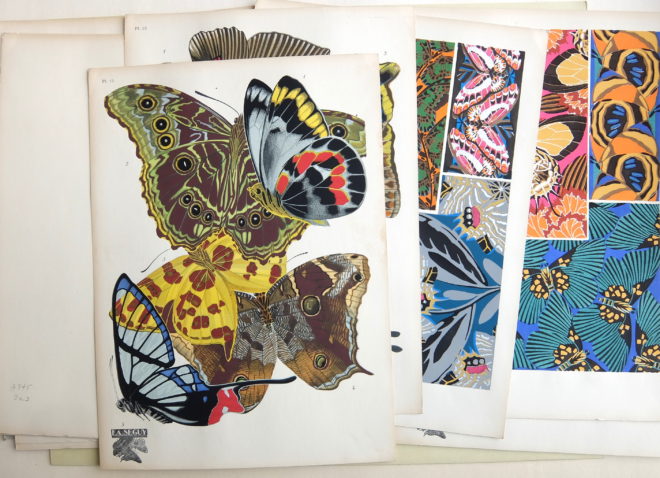 Archivists also sometimes function as detectives of sorts, which will be demonstrated at the Science History Institute event “Escape from the Archives.” The escape room-style game casts players in the role of researchers, trying to sort through a mystery by finding clues in the Institute’s collections with the help of staff archivists. “They come to understand that archivists do a lot of work behind the scenes for researchers,” said Kativa. “The game has parallels with real historical research. Sometimes you’re working with an established narrative of how something was discovered. But scientific discovery doesn’t always follow a straight line. The person credited might have based their work on someone else’s work.”

The Philadelphia region is especially rich in collections, with its numerous historical and cultural institutions, colleges and universities, and home to so many “firsts” among American cities. As a result, Archives Month in Philadelphia is a little different than in other places. “We’re unique in that we have a month-long event,” said Kativa. “In other places, it’s just one day, or maybe a week.”

That archival muscle will be on display on October 30 at the Parkway Central branch of the Free Library. For the fourth year in a row, it will be the site of a final event, as representatives from more than 20 archives gather around the theme “Design in the Archives,” with displays, presentations and activities. “It’s rare for archives to bring original materials outside their institutions,” explained Duinkerken. “Usually it would be copies or facsimiles.”

For a complete schedule of events for Archives Month Philly, see their website HERE.