Salvage City: Recycling History One Object at a Time 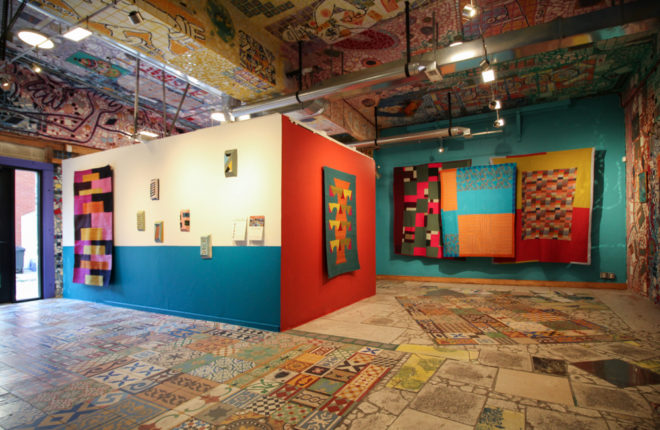 Reclaimed materials permeate Philadelphia’s built environment. Philadelphia’s Magic Gardens may be the city’s best known example and is hosting Translations, an exhibition of artwork by Martha Clippinger, until November 10, 2019. But the creative use of reclaimed materials in the city is not limited to South Street. Both historically and in recent years, salvaged and cast-off materials have appeared in iconic locations throughout Philadelphia.

While artist Martha Clippinger’s work does not draw directly from Philadelphia salvage, she uses a similarly diverse array of found materials. “I’m interested in the histories of my materials. Some I know, like family members’ clothes that I incorporate into my quilts, while others, such as the scraps of wood used to make painted constructions, may only hint at their former lives,” she said. Clippinger use salvage because, “It’s the inherent imperfections of my reclaimed and found materials that spark my imagination and contribute to the works’ character, but it’s also resourceful, utilizing more waste than it creates.” 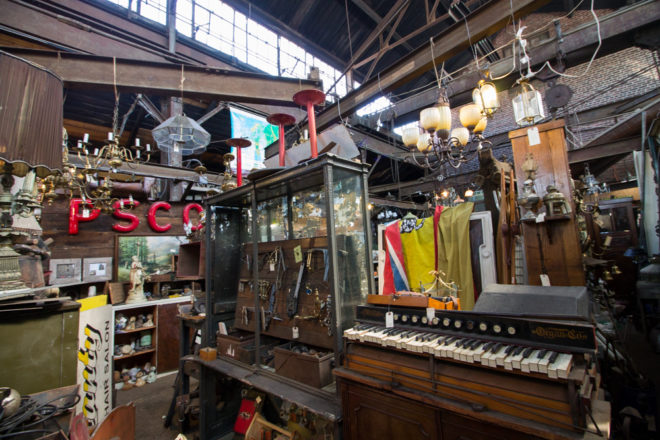 The showroom at Philadelphia Salvage Company in North Philly is an engrossing labyrinth of reclaimed material. | Photo: Michael Bixler

Her current show at Philadelphia’s Magic Gardens features more than two dozen brightly colored wood, textile, and mixed media pieces defined by the use of geometric designs and graphic shapes. The works include woven rugs, ceramics, and repurposed wood. Many were made in collaboration with Mexican artisans and artistic partners including Licha Gonzalez Ruiz and Agustin Contreras Lopez. Collaboration seems to define the repurposing of salvage materials, whether by artists or architects.

Reusing building materials in art and architecture has a long, global history. The practice dates at least to late antiquity, when the Latin term spolia, or spoils, referred to the practice of using building stone or decorative art in new buildings and monuments. “Historically, and even today, this was and is done for both practical and symbolic reasons,” said Jeff Goldstein, principal of the Philadelphia-based architecture firm DIGSAU.

The example of Lombard Central Presbyterian Church balances these rationales. Aaron Wunsch, associate professor of historic preservation at the University of Pennsylvania, noted that, “One interesting pattern is the longstanding tendency of churches to incorporate parts of the congregation’s earlier buildings. This seems especially pronounced in local African American churches.” Churches that emphasize their community and history and want to avoid costly duplication of specific building or religious features are thus logical reusers of their own building materials. 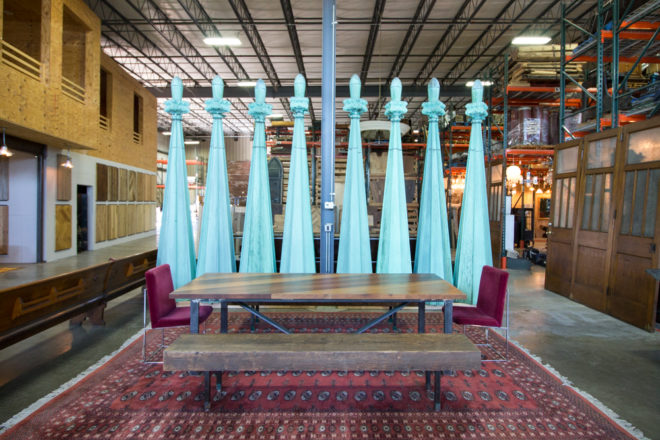 So too are governments, that may wish to preserve certain ideas of national or regional history, even if they destroy it in its most tangible form (i.e. Penn Station’s eagles). Contemporary businesses also benefit from the aura of elegance, permanence, or sentimentality conveyed by historic materials, not to mention the Instagram-friendly aesthetic of old meets new like Lokal Hotel.

These examples point to the difficult balancing act of dealing with architectural salvage. On the one hand, it creates the opportunity for interesting interior decor, architectural ornamentation, and sustainably using existing building materials. On the other hand, salvage is not a substitute for or equivalent to historic preservation. More often it is the result of the decision not to preserve a site.

No one understands this like those who work in the salvage business. “I find reuse very natural and wish there was more of it,” said Bob Beaty, who has owned and worked for companies behind the salvaged boardwalk for the Barnes Foundation and Oyster House’s repurposed furnishings. Today he owns Beaty American and says that his clients include homeowners, interior designers, and restaurants. Most of his product comes from buildings that were constructed between the 18th and early 20th centuries. 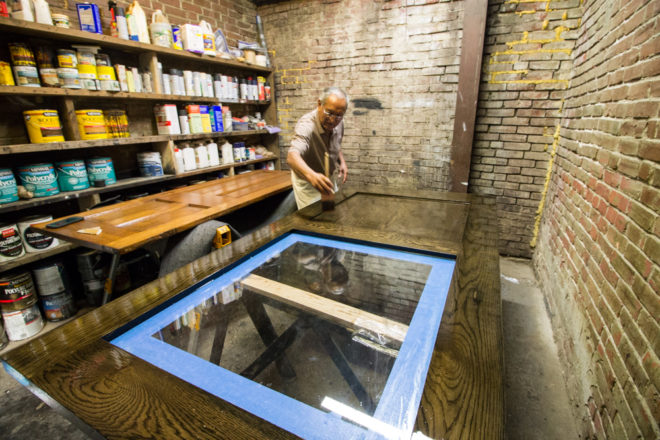 A refinisher at Philadelphia Salvage Company puts a final coat of polyurethane on a large, reclaimed door. | Photo: Michael Bixler

Philadelphia is home to at least half a dozen salvage companies, each with their own specialties. Philadelphia Salvage Company will build custom items using its stock. ReStore offers affordable furnishings with its proceeds funding the construction of Habitat for Humanity houses. Provenance features a diverse mix of building items and quirky collectibles. In the wake of 2018’s record number of demolitions in Philadelphia, Wunsch says increased amounts of salvage would make sense, although he cannot say for certain.

On the design side, Goldstein says that the challenge is finding appropriate materials to reuse. As with any project that seeks to thoughtfully use historic components, there are no one-size-fits-all solutions here, which is exactly the point. When Goldstein’s firm was designing a house in rural Delaware, the team benefitted from learning that a nearby barn was being razed. “The rustic barnwood turned out to be the best possible solution, adding an authentic connection to the vernacular for an otherwise modern house.”

The best outcome of architectural salvage is new life for building features that never had a chance and enticing art and architecture for residents. The darker side is disinvestment in historic preservation and the invasion of pointless barn doors into suburban homes à la HGTV. Spolia is also confusing for those without an intimate familiarity with historic buildings. Any guide of Roman Empire ruins, or historic house that underwent multiple phases of development, is accustomed to the question, “Is this original?”

Maybe this process of education, fraught and confusing as it can be, is ultimately the highest calling for old building elements. Whether you call them spoils, salvage, or reused materials, these items become translators of history. Just a few precious features from a once-whole building can be used to interpret the past, while simultaneously taking on new meaning in the present, ideally in a context that includes many more intact historic buildings. From an act of destruction comes the possibility for understanding.