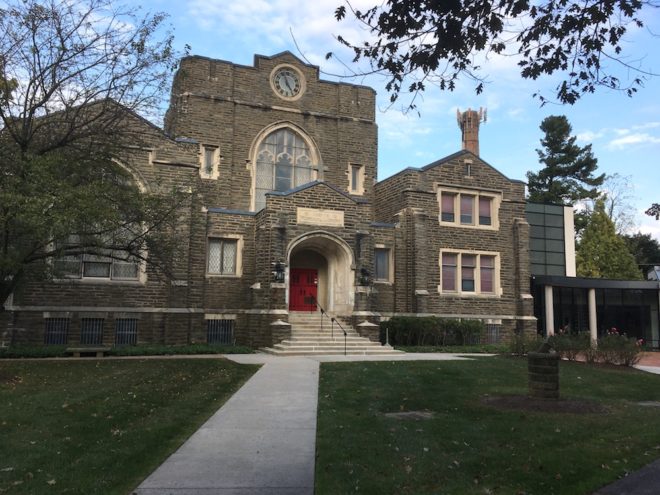 As Philly neighborhoods go, Mount Airy ranks high for its friendly and peaceful image. But there was nothing friendly or peaceful about a public meeting at the United Lutheran Seminary (ULS) on Tuesday, October 22. More than 200 people crowded into Benbow Hall on the school’s leafy campus along Germantown Avenue. The group gathered to hear the details of a proposal to develop a portion of the 11-acre property to include multifamily housing in three new buildings and two existing structures. Rumors, speculation, and even fear mongering have circulated about potential declining property values and the supposedly ill effects of “low income housing” since the plan first surfaced. East Mount Airy Neighbors (EMAN) called the meeting to give ULS the opportunity to explain the proposal and to give neighbors the chance to weigh in.

The school was originally known as the Lutheran Theological Seminary at Philadelphia (LTS) before consolidating two years ago with another seminary in Gettysburg associated with the Evangelical Lutheran Church in America. It has occupied the property since 1889, purchasing it from the estate of James Gowen and developing it over the next 80 years into a campus of more than 20 buildings. In November 2018, the site was designated an historic district and was placed for legal protection on the local register by the Philadelphia Historical Commission.

However, the property’s history goes back much further. The original estate was established in 1750 by William Allen, a Loyalist, Mayor of Philadelphia during the colonial period, and Chief Justice of the Pennsylvania colony. He named the country estate, which at the time was outside the city limits, “Mount Airy.” While Allen’s original mansion and outbuildings no longer remain, Gowen’s 1792 home still stands on the property at 7331 Germantown Avenue.

Over the next 200 years, as the property evolved from private estate to educational campus, so too did the surroundings change from country woods to a largely built-out neighborhood of mostly single family homes, apart from the commercial corridor along Germantown Avenue that delineates East from West Mount Airy.

Other Philadelphia neighborhoods have grappled with the recent surge in real estate development after decades of population loss and post-industrial decline in the city. But Mount Airy has enjoyed a fairly content equilibrium. “Not much zoning stuff happens in Mount Airy,” noted resident Larry Freedman who, by contrast, reviewed endless development proposals while serving on the Northern Liberties Neighbors Association Zoning Committee.

So, when news of ULS’s plans leaked out to the community earlier this month, reaction was swift and negative. The East Mt. Airy chapter of the social network Next Door lit up with comments and speculation about the proposal.

The plans presented at the meeting call for 197 residential units of varying sizes, with 149 at market rate in three new buildings and 48 affordable units in an existing building. At five stories, the new construction is taller than the housing stock in the neighborhood, but comparable to much of the seminary’s current buildings architect Cecil Baker noted.

Unlike most new residential projects in the city, ULS wouldn’t be selling to a developer. “It’s still a project of the Lutheran Seminary,” explained Pete Knudsen, a trustee of the school’s endowment foundation. “We have more land than we need.” As the cost of maintaining that land and the historic buildings on it escalates, he said ULS was seeking to create a revenue stream while at the same time preserving the park-like character of the campus and “opening it up to the public.”

The solution they propose, according to architect Cecil Baker, places the requisite parking underneath the new construction, “to keep it a green campus.” Two of the three new buildings in the plan would be constructed on what is now a parking lot.

To build multi-family units, ULS will need to have the parcel rezoned from its current RSA-1 (single family dwellings), to RMX-2 (residential and mixed-use developments) and CMX-2 (primarily neighborhood-serving retail and service uses). Such rezoning requests are made by the City Councilperson whose district the property is located. In this case, that Council member is Cindy Bass. At the outset of the meeting, Bass said she’d only go forward with that request if the community supports it.

Baker said he walked the site with John Farnham, executive director of the Philadelphia Historical Commission, to identify which buildings were the most important. While some had been previously augmented with modern-looking additions, Baker’s plans called for elements that would be more harmonious with the older buildings, such as choosing brick colorations that recall the Wissahickon schist so prevalent in the area’s housing stock. 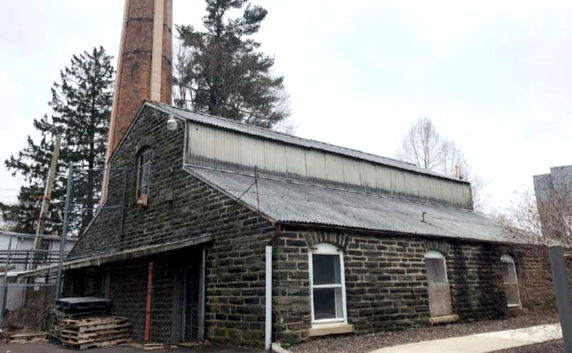 United Lutheran Seminary’s power plant, built in 1907, is included in the site’s historic district designation as a contributing structure and is legally protected from demolition. Yet, the current proposal for redeveloping the campus calls for razing the building. | Image courtesy of Oscar Beisert

Baker deemed it necessary to demolish a 1907 power plant that had been labeled as “contributing” to the parcel’s historic district designation and to relocate another building, also contributing, to a different part of the site. Those two significant alterations, as well as any new construction, would require approval by the Philadelphia Historical Commission.

As Baker went through his presentation, he was inundated by questions and comments, despite the efforts of the moderator, EMAN President Tonyelle Cook-Artis, to stick to her stated agenda of a presentation first and Q&A after. Several points of contention were raised. In an area of mostly single-family homes, some were alarmed by the number of units being proposed. “I’m concerned about the scale of the project,” said Bass. “It’s dropping a densely populated neighborhood into an already existing neighborhood.”

Homeowners along Boyer Street, whose properties abut the seminary, expressed dismay at the plan to have a ring road behind their backyards as an egress out of the campus.

The plan to change the zoning of the section of the parcel along Germantown Avenue to CMX-2 concerned others who wondered if there were future plans to add offices or retail stores.

The loudest complaint was that ULS’s process had been secretive and not inclusive of the community’s opinions. Although these current plans were brought to EMAN only a few weeks ago, ULS had begun actively seeking to develop the property a few years earlier, said Hercules Grigos, ULS’s zoning counsel for the project. When the request form proposals ULS put out to developers did not yield any satisfactory results, seminary officials decided on their current course.

Both the area neighbors and seminary students present at Tuesday’s meeting were dismayed that ULS had kept the plans, however unformed, under wraps for so long.

Grigos and architect Baker seemed taken aback by the strong negative reactions, as the meeting and presentation was repeatedly referred to as the beginning of the process. Knudsen, the endowment trustee, added “We asked, ‘What would be the maximum use?’ That’s what you’re seeing here.”

As the meeting approached the two-hour mark, Councilperson Bass made a decision. Addressing the seminary officials, she said, “Abandon this project. Have a conversation with EMAN, WMAN [West Mount Airy Neighbors], the neighbors, and your students about what they can live with.”

Bass encouraged the neighbors to articulate what they would like to see happen with the property. Ignoring exclamations of “Nothing!” from the crowd, she went on to say that, with the seminary being a long time good neighbor, the community should be willing to work with them to find a solution that addresses everyone’s needs and concerns.

To close the meeting, EMAN president Cook-Artis announced that the plan would not go forward and there would be future meetings scheduled.