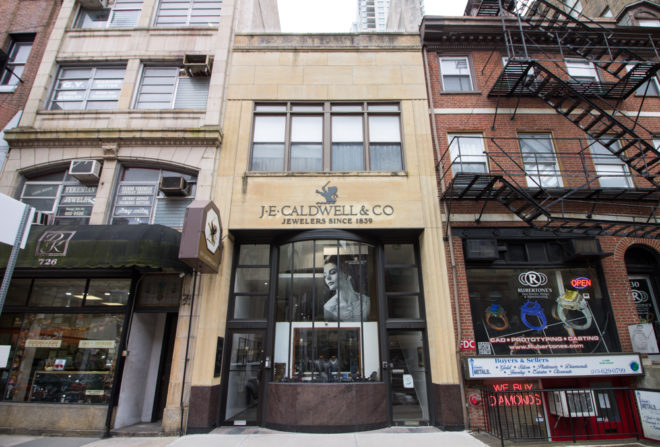 728 Sansom Street was designed by Austrian-born architect Louis Magaziner in the 1930s for the House of Milner Jewelry Store. | Photo: Michael Bixler

While visiting the Athenaeum of Philadelphia’s new exhibition, A Venturesome Spirit: Louis Magaziner in 20th Century Architecture, I noticed that the architect designed a small building on Jewelers’ Row. Aware that a large portion of the south side of the 700 block of Sansom Street was being prepped for demolition, I quickly headed over to take a look. Despite four years of public opposition, suburban real estate developers Toll Brothers are tearing down 702, 704, 706, 708, and 710 Sansom Street to make room for a new, luxury apartment tower. To my relief, Magaziner’s building at 728 Sansom Street is a few doors down from those that are currently being razed. The building, constructed in the 1930s for the House of Milner Jewelry Store, looks virtually unchanged today save for the J.E. Caldwell & Co. sign that now hangs on the facade.

If the mark of a great architect is having a recognizable style like Frank Furness, Frank Lloyd Wright, and Le Corbusier, then Louis Magaziner was not a great architect. If, however, an architect’s grandeur is measured by their ability to produce a vast array of stunning buildings varied in both style and type, then Louis Magaziner was magnificent. The Athenaeum’s exhibit highlights both the variety and the splendor of Magaziner’s body of work.

Louis Magaziner was my great-granduncle. Although he died before I was born, I have come to “know” him through research I have done about his  friendship with fellow architect Julian Abele. He was born in Hummene, Austria in 1878 and immigrated to Philadelphia with his family at the age of 10. He attended Central High School and then entered the University of Pennsylvania as the first Jewish student in the School of Architecture. Julian Abele enrolled as the first African American in the program two years later. They established a close bond which endured for the rest of their lives.

The exhibition at the Athenaeum opens with biographical information about Magaziner and an exploration of his influence on three other major Penn-trained Philadelphia architects: Julian Abele, Louis’s son Henry Magaziner, a notable architect and historic preservationist, and Louis Kahn, who worked in Magaziner’s offices early in his illustrious career. The focus of the rest of the exhibition is Magaziner’s wide-ranging body of work that spans the entire first half of the 20th century. Rather than a chronological arrangement, the show divides the architect’s projects into categories: hotels, residences, commercial/office buildings, theaters, Jewish organizations, hospitals, and educational buildings. Within each section, the works displayed include a mix of sketches, blueprints, floor plans, promotional materials, photographs, and so forth. The result is an exhibition that emphasizes variety, but does so in a well-ordered and systematic fashion. 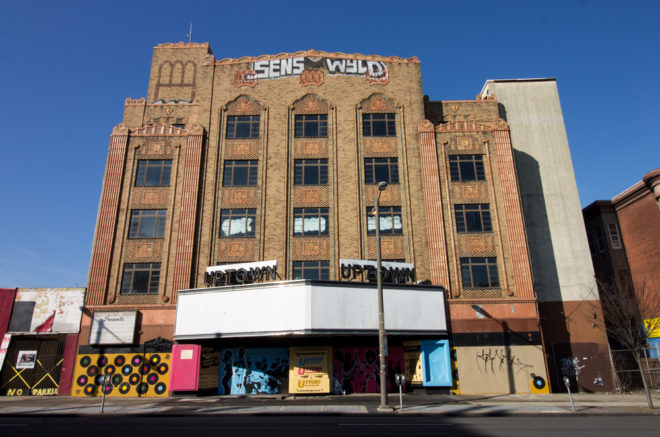 The Uptown Theater at 2240 N. Broad Street was built in 1929 and designed by Louis Magaziner. The Art Deco movie house closed for good in 1981 after decades of serving as a popular African American music venue. The Uptown Entertainment and Development Corporation now owns the building and hopes to undertake a full renovation of the building. | Photo: Michael Bixler

Each section of the show exemplifies the breadth of Magaziner’s portfolio in terms of both style and clientele. Magaziner-designed residences, for example, include Wingwood House, the elaborate mansion-by-sea of the wealthy Stotesbury family in Bar Harbor, Maine and the boxy, affordable Tasker Homes, a 1940s project of the Philadelphia Housing Authority. Among his commercial commissions are an imposing, stone bank in Chester, Pennsylvania and the whimsical, colorful exterior of a Suburban Station camera shop.

The exhibition also includes numerous plans for projects that never came to fruition. The most stunning example greets visitors as they enter the show. The Hotel Inlet Terrace, a Florida resort was envisioned as a sumptuous, Moorish palace. Sadly, a hurricane wiped out the initial efforts of the developers and the project was abandoned.

Perhaps Magaziner’s best known Philadelphia building still standing is the Uptown Theater, one of several movie palaces that the architect designed during his career. When the Uptown opened in 1929, it was a feat of both design and engineering. The Art Deco movie house was the first in Philadelphia that was designed specifically to show “talkies” (i.e. films with synchronized sound) using state-of-the-art equipment.

Magaziner issued a statement at the time of the Uptown’s opening that described his vision for the building, both inside and out. “We have at our command materials for construction and tools that were unknown in earlier periods. Why not use them to the fullest of their possibilities? We have steel and machines to fashion it. This must enter vitally into our thoughts. We have new methods of using concrete, and wood, and glass, and many of the plastic materials; machinery for molding all those to our designs—to create new forms—no longer to apologize for the powers and potentialities of the machine, but frankly to accept its products. Devices for heating, cooling, lighting and sound distribution are all at our service.” 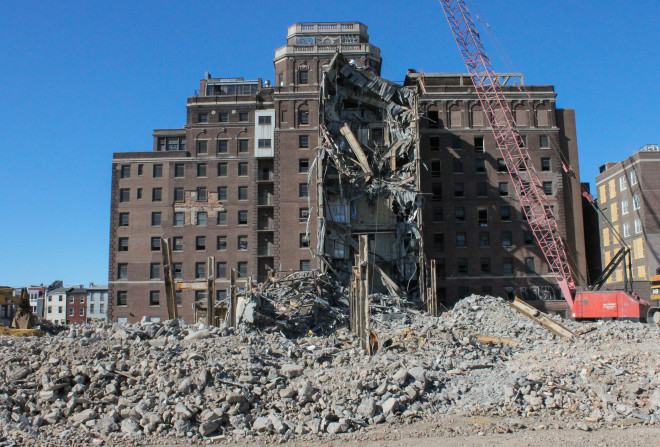 Mt. Sinai Hospital was designed by Louis Magaziner and completed in 1905. The building was demolished by real estate development firm Concordia Group in February 2016 to make way for new townhomes. | Photo: Michael Bixler

He continues, revealing the soul of a visionary and the heart of an idealist. “Above all we are in an age and atmosphere of space annihilating movement. We dart along our smooth highways and through our waterways. We fly across land and sea. Sound and light waves are directed by us to where we will. And so in myriad ways we are approaching an elusive, ever beckoning fourth dimension and infinity.”

Following my visit to the exhibition, I went on a tour of the Uptown, co-led by Athenaeum curator Bruce Laverty and Linda Richardson, executive director of the Uptown Entertainment and Development Corporation (UEDC). The theater has been closed since 1981 and is in poor shape due to neglect and vandalism. Richardson is raising funds to restore and reopen the theater, which has a rich, local history as both a movie palace and later as a famous African American music venue.

The exterior of the building is still an exquisite example of Art Deco design, albeit marred with graffiti on the upper floors. Inside, some of the building’s original furnishings, including marble in the stairwells and wrought iron banisters, are still intact. The original seats, surprisingly, are still there 90 years after the Uptown opened. Extant grillwork that obscured organ pipes and sumptuous murals, one hopes, will be restored to their original glory before more deterioration sets in. Richardson and the UEDC are determined to save the building and put to use to benefit the surrounding community. Given the successful resurrection of the Metropolitan Opera House further south on North Broad Street, applying a large-scale preservation effort to the Uptown seems expensive, but well within reach.

Some of Magaziner’s most prominent buildings have been destroyed for new construction. The Sidney Hillman Medical Center on 20th and Chestnut Streets was demolished in 2011 and Mount Sinai Hospital was torn down in 2016. Yet, his the Amalgamated Clothing Workers building is still standing at 21st and South Streets and has been converted into lofts. A curvy, former optician’s shop on the southeast corner of 18th and Sansom Streets is also still around, albeit now covered in a graffiti-like mural and home to Manhattan Bagel. Here’s hoping that Toll Brothers or another developer does not pick that corner as the site of the Center City’s next luxury tower.

A Venturesome Spirit: Louis Magaziner in 20th Century Architecture is on view at the Athenaeum of Philadelphia weekdays from 9AM to 4:45PM until December 20. Admission is free. For more details see the event website HERE.