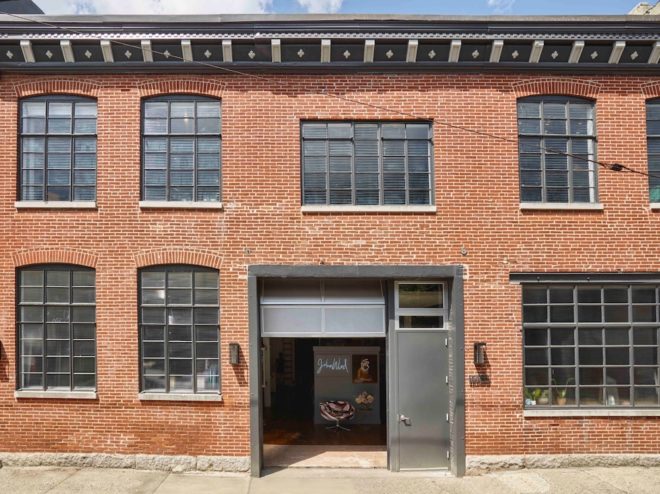 This old South Philly horse stable built in the late 1800s for a nearby firehouse is now home to Maximal Art, a renown jewelry design studio. | Photo: Richard Powers

South Philly has a long reputation for being a place where artists got their start. There’s Mario Lanza, Kenny Gamble, and Beanie Sigel just to name a few. In addition to a recent influx of millennials, this popular section of the city, long associated with the Mummers, the mob, comically illegal parking, and crab gravy, is now attracting nationally renown designers. In 2018, jewelry designer and artist John Wind relocated his company, Maximal Art to an old horse stable at 1606-10 South 8th Street. Termini’s Bakery is so close you can smell the almond biscotti.

Wind launched his jewelry company in 1985 with friend and business partner Hilary Jay, founder of DesignPhiladelphia, following studies at the University of Pennsylvania and the Slade School of Art in London. The flea markets of Portobello Road was the source of inspiration for his “modern vintage” designs, which combine antique and contemporary findings. Philly fashion maven Joan Shepp was among the first to snap up their collection which she continues to feature in her Chestnut Street boutique.In the 1990s, Jay moved on to become a journalist and entrepreneur. Wind now designs collections for upscale boutiques and national chains like Anthropologie. In 2015, when his company turned 30, Wind had the honor of being accepted into the permanent collection of the Philadelphia Museum of Art. When not designing jewelry, Wind creates conceptual art. His art installation, The Women, opens on Thursday, November 14 at the InLiquid Gallery.

Previously, Wind shared a studio on the 800 block of Bainbridge Street with his mother, metal sculptor Dina Wind. He also operated his jewelry business from Aston, Pennsylvania. In 2018, four years after his mother’s passing, Wind and his father decided to sell both buildings.

But why would a designer whose jewelry is sold in high-end shops from Rittenhouse Square to Palm Beach relocate his headquarters to East Passayunk? “It’s an appealing neighborhood and an easy commute,” said Wind who lives in Center City and was attracted to the 6,500-square-foot building for its adaptability into a multi-purpose space: jewelry studio, showroom, art studio, gallery, and event space. 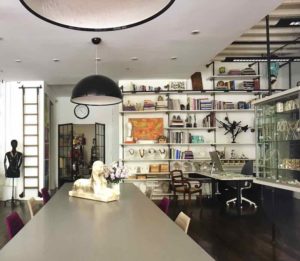 The two-story, red brick building features over-sized industrial windows, trimmed in black metal on both floors, creating a natural light source. “Architect Jeanne Scandura was based here for a decade and had previously done a thoughtful renovation,” said Wind. “Her office was on the first floor, a rental apartment was on the second floor. Before that, it had been a beverage wholesaler for many years. I’ve heard some colorful stories about that from neighbors.” The building was originally a stable, constructed circa late 1800s for a nearby firehouse.

Wind worked closely with Eberlein Design Consultants and Canno Design Architects on the new renovation. Horstman Lynch was the general contractor. “The biggest change we made was in connecting the first and second floors,” said Wind. “There had been a steep, narrow staircase leading up from the street. We broke down the wall, built a beautiful, wide, floating steel and cypress wood staircase, and created visual continuity between the two floors.”

When it came to light fixtures Wind gravitated to the contemporary design of Marcel Wanders whose work is part of MoMA’s permanent collection. “The first floor is anchored around two gorgeous Skygarden fixtures,” said Wind. Contemporary fluorescent fixtures fill the rest of the ground floor with task light. On the second floor, Wind recycled all the track lighting that had previously been installed throughout the building.

Wind divided the first floor into four spaces: a combination showroom and workroom, a gallery for his conceptual art, parking space for two cars, and a storage area. The second floor showcases his mother Dina Wind’s award-winning metal sculpture which is also installed at Woodmere Art Museum, the Pennsylvania Academy of Fine Arts, and the Philadelphia Museum of Art. There is also a catering kitchen, plus indoor and outdoor space for private events. 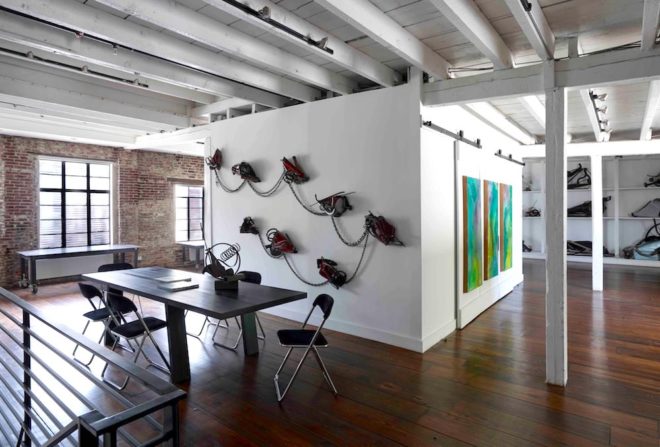 The second floor deck was a major undertaking requiring flooring, masonry work, a new steel and wood pergola, lighting, and landscaping. “It was just a roof, but clearly intended to be a deck. We converted a large window into a pair of French doors opening dramatically to the new deck. The pavers are ceramic that look like concrete. They float on elevated spacers that allow for easy maintenance, hide the irrigation system, and address the drainage pitch of the whole roof.” Wind added steel planters filled with bamboo along the entire west wall of the deck and three additional planters for wisteria to climb up and cover the new pergola on the east side that was built to provide shade and create an outdoor room for entertaining.

Wind offers his space to fundraisers for nonprofits. “We’re looking for events that create synergy in the building and within the city. They include a shopping element where we donate 25% of jewelry sales to the organization and everyone gets to explore the building, enjoy the art and architecture, eat and drink, and support the cause,” he said. Wind has hosted events for the Cancer Support Community, Planned Parenthood, Vox Populi, and Woodmere Art Museum. The space is also rented for bridal showers and holiday parties, where guests may assemble their own charm bracelet or necklace. The second floor and deck are available for company board meetings, retreats, and photo shoots.