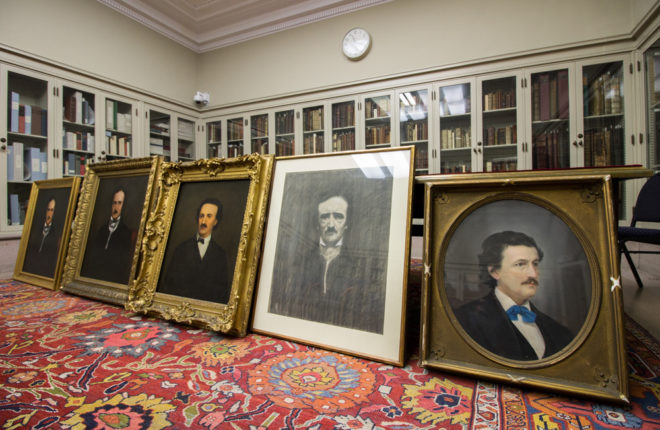 The Rare Book Department at the Free Library of Philadelphia has nine large portraits of writer Edgar Allan Poe in its collection. | Photo: Michael Bixler

An unparalleled collection of rare Edgar Allan Poe treasures sit largely unknown to the public in the Rare Book Department at the Free Library of Philadelphia’s Parkway Central Branch. Recently, while updating a display, librarians were surprised to find numerous paintings of the mysterious writer hiding in the depths of the collection. There are nine similar, yet nuanced portraits of Poe, as he gazes back wearily with his tell-tale tortured expression. Framed and well cared for, the portraits are a substantial size and date back to the late 1800s and early 20th century.

Allison Freyermuth, head of the Rare Book Department, believes that the paintings are from the personal collection of Colonel Richard A. Gimbel, a renowned rare book and manuscript collector and son of the founder of Gimbel’s department store, which was located at 8th and Market Streets. Gimbel amassed a large collection of Poe materials during his lifetime. Dating from 1809, the year Poe was born, his extensive collection was left to the Rare Book Department when Gimbel passed away in 1970. While the portraits are intriguing, Freyermuth noted that, in the hierarchy of the collection, there are more valuable rarities than the paintings.

“We have a Tamerlane, which is his first printed book. People didn’t believe that he published it or that it existed until after his death. They’re very, very rare,” said Freyermuth. “We have the only copy of The Raven written in Poe’s hand, and we have Poe’s personal copy of The Raven and Other Poems.” Among the rare books, autographs, letters and more, Freyermuth estimates they have thousands of Poe related materials. Original manuscripts of The Murders in the Rue Morgue, Annabel Lee, and For Annie can also be found.

“Poe wrote some very important things when he was in Philadelphia. We always have a display case devoted to him because we have such a stellar collection, most of which was given to us by Colonel Gimbel. He was a big collector and he had the money to do it,” said Freyermuth. 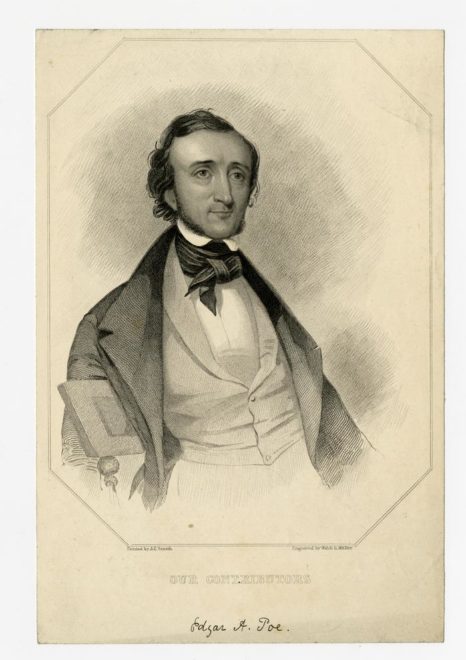 This 1844 print of an engraving of Poe, modeled after a watercolor painted by A.C. Smith, shows what the writer looked like when he lived in Philadelphia. | Image courtesy of the Historical Society of Pennsylvania

Poe lived in Philadelphia for six years from 1838 until 1844. He engaged in multiple writing endeavors and worked for a time as an editor and a literary critic. He reviewed Charles Dickens’ 1841 mystery novel Barnaby Rudge, which featured a talkative raven character in the story. Poe suggested the bird should have been more prominent in the plot. Just a few years later in 1845, Poe published what is widely considered his most iconic work, The Raven.

Gimbel, an avid Poe fan, also acquired Dickens’ pet raven, Grip, which lived in the writer’s home in England. Dickens had his pet mounted after it died, and years later, Gimbel bought the taxidermy bird at auction. Grip, thought to be Poe’s inspiration for The Raven, has also found its perch in the Rare Book Department and receives scores of visitors each year. Among them recently was the raven-master from the Tower of London who solved one mystery: Grip’s gender. The famous raven was a female.

“Grip was allowed to walk around like a dog or a cat,” said librarian Karen Kirsheman of the Dickens household. “When she started biting the ankles of the children, Dickens’ wife made him take the bird outside to live in a shed. Grip eventually died of led paint poisoning.”

“We have people come from all over the world to see Grip. She is always on display. She’s a fixture of the Rare Book Department,” Freyermuth added. 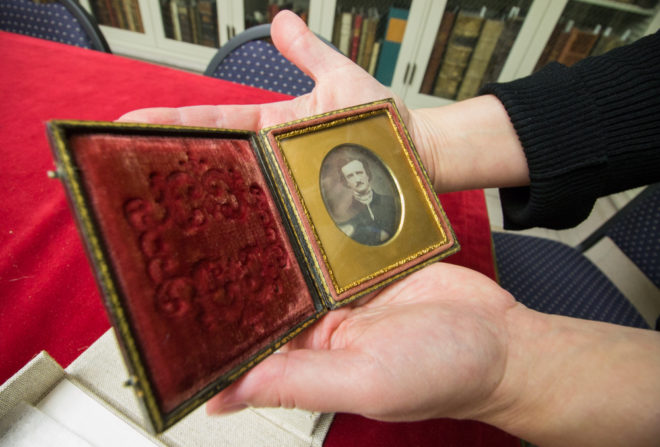 Within the Rare Book Department’s vast, rare holdings is this daguerreotype of Poe. | Photo: Michael Bixler

Currently, there are no plans to exhibit the Poe portraits altogether, but more likely to rotate them from time to time. Occasionally, a few of the paintings are brought out together for parties, as in January when the Raven Society, the Free Library’s young friends group, gathers in honor of Poe’s birthday. “In a weird way, it would be kind of creepy to have them all out at once. They are similar, so it would be images of Poe over and over,” Freyermuth said.

Perhaps the most substantial piece of Poe memorabilia Gimbel bequeathed to the Free Library was Poe’s house on 7th Street near Spring Garden. Gimbel bought the home in 1933 and the one next door a couple of years later, knowing it was the only Poe residence left in the city that had not been torn down. The home was declared a National Landmark in 1963, and the National Park Service acquired the property in 1980. The Edgar Allan Poe House is currently only open to the general public on Fridays, Saturdays, and Sundays.

Poe lived in the home for one year with his young wife and first cousin, Virginia, and her mother, his aunt, Maria Clemm. The family also had a cat at the residence named Caterina. At the time, the Spring Garden district was considered to be a suburban area just outside of the city. Today, the two homes stand as 19th century remnants surrounded by modern architecture. “We don’t get a good sense of the neighborhood, as you would in Society Hill,” said Steve Medeiros, who works at the Poe House. “We are in plain view, but everything around us is from the 20th century. Unfortunately, we’ve lost buildings from the Poe-related years.” 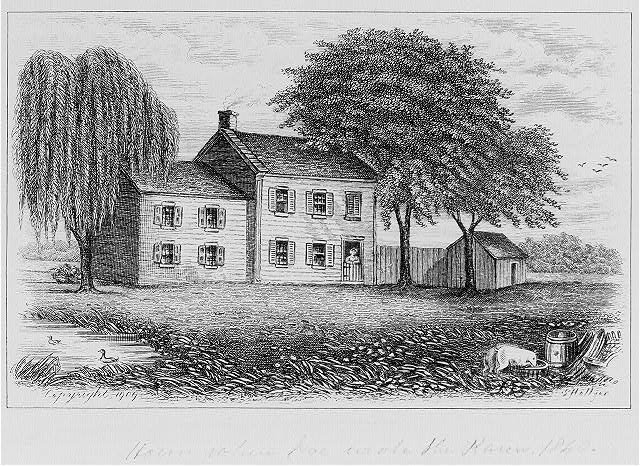 A steel engraving from 1909 shows Poe’s house on 7th Street in Philadelphia. | Image: Prints and Photographs Division, Library of Congress

Poe’s Philadelphia years are considered to be highly productive in terms of his personal writing. While his legendary gloomy persona has made him a pop culture icon, it has also overshadowed his enduring work ethic while he honed his craft and tried to survive as a writer. Several stories were written while he lived in the city, including Fall of the House of Usher, The Murders in the Rue Morgue,The Mask of the Red Death, and The Gold Bug. Another classic short story written by Poe appears to have a direct connection to the Poe House. “The cellar is very interesting because it possibly relates to The Black Cat. We know for sure he was living in the house when it was published in August of 1843. It describes a cellar very much like the one we have here in a paragraph towards the end of the story,” Medeiros remarked.

While the Poe House offers exhibit panels showcasing his life, family, and publishing, as well as one first edition of the Tell Tale Heart, the house museum remains sparse. The entirety of Gimbel’s collection is overseen by and stored at the Free Library. Medeiros noted the most recent big project the property underwent was updating the shutters on both houses.

“Gimbel bought it at auction knowing it is the last house that Poe lived in that survived and made it into a museum in 1934. When he died in 1970, he willed everything to the City and the Free Library ran it for a few years. The last monies were devoted to updating our exhibits. Ten years ago, we put illustrations inside the house for Poe’s 200th birthday celebration. We hope to begin having activities outside,” said Medeiros.

Edward G. Pettit, manager of public programs at The Rosenbach, is known around the city as “Philly’s Poe Guy.” He’s a fan of the Poe House for its minimalistic appearance, noting it is more authentic for visitors. “It is such a great way to interpret a writer who takes us into our psyches and deals with intimate fears and anxieties. The Poe House reflects that in a way being empty. The walls are a bit cracked. In the basement they purposely don’t clean the cobwebs off the ceiling. That’s a great interpretation of the way we like to think of Poe,” Pettit said. 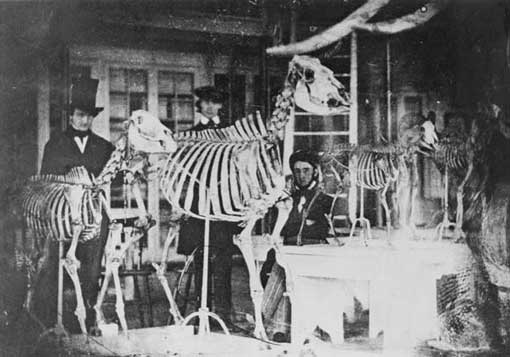 What is clear through Gimbel’s collection is the years Poe spent writing in Philadelphia were prolific. What remains obscured is Philadelphia’s true ownership of one of the greatest literary minds of all time. With an already staggering amount of Poe materials in the city that brings travelers from around the globe to the third floor of the Free Public Library, why does Poe remain an all but forgotten hometown hero?

“I think his connection to Philadelphia is definitely overlooked,” said Medeiros. “Most people associate him with Baltimore, yet he spent six years here. Some of his greatest short stories came out of the Philadelphia period. We were the second largest city in the United States at the time. The year he lived in the Poe House, he was freelancing and trying to start his own magazine.”

“In Philly, it is tough,” said Pettit. “How do you compete with the Liberty Bell, Independence Hall, and Ben Franklin? That’s a real hard thing to compete with in popular consciousness. For some people, the biographical stuff doesn’t matter.”

While Pettit has seen a marked improvement in people recognizing Poe’s connection to Philadelphia since the bicentennial of his birth, he noted designating a new Poe-specific museum would prove to be difficult. “You would wind up with this trade off. You would get more eyes on the collection, but the nice thing about it being at the Free Library is we can all access it. Items aren’t hidden in a collection that only scholars can get to. If it was placed in a private museum, the access to the collection may be limited.”

Pettit suggested another idea as a possibility to help Philly embrace Poe more readily, one that would encompass additional writers who held firm to their unique artistic visions despite the odds. “There would have to be a very large, lucrative project to really launch the Philly-Poe connection. What I would love to see is a museum open that is dedicated to Philadelphia gothic, which would have Poe and later noir writers,” said Pettit.

He added, “Poe triumphed despite what he endured. The circumstances in which he had to live; the poverty and trying to survive in a profession that couldn’t support him. He did what he had to do to survive. It’s almost like a ‘Rocky’ story.”