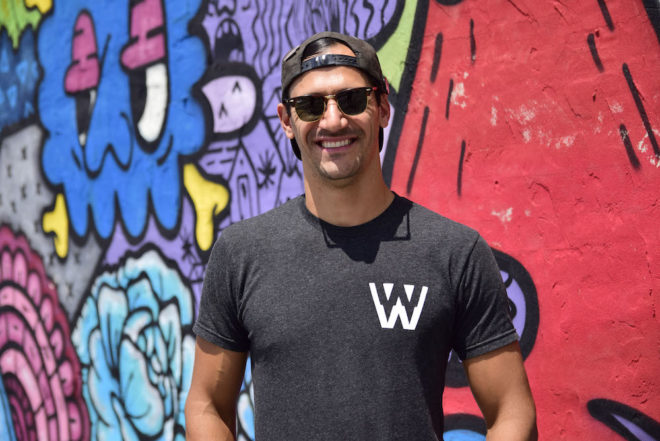 Gavin DiRusso standing in front of a mural on the roof of his event venue, Warehouse on Watts, a former rope factory in North Philly. | Photo: Richelle Kota

Gavin DiRusso loves to throw a party. In 2012, between jobs as an engineer and a project manager, he launched PartyPlant, an event startup that hosts annual gatherings and private shindigs. DiRusso quickly found that booking different venues all across the city wasn’t easy. Most event spaces require party organizers to use in-house catering and entertainment services, and DiRusso discovered that there were no true “blank slate” venues. In true DIY spirit, he decided to open a venue of his own in North Philadelphia where planners have complete logistical control over their event. The idea was simple, but the work to make Warehouse on Watts a reality would prove to be challenging.

Philadelphia has a long tradition of creatively repurposing industrial space. DiRusso bought his warehouse at 923 N. Watts Street in an estate sale in 2013. The building was originally a rope factory, then an office for a greeting card company, and later the underground venue Club 923, where it is rumored that rapper Jay Z once played in his rise to stardom. While DiRusso appreciates the old building’s architectural integrity, he wasn’t expecting there to be three different layers of walling and a tangle of electrical systems. He quickly went to work clearing out the clutter and making the building more usable. “As I slowly worked on cleaning the building up and figuring out all the systems, I focused on getting the permits that I needed to make it an operational venue,” said DiRusso. “When I bought the building I inherited all the licenses, so I just had to go through the renewal process.”

As soon as DiRusso received approval for the last permit he needed, a special assembly license, an officer from the Department of Licenses and Inspections (L&I) visited the building and began evicting his tenants. For the next 35 days, DiRusso had to vacate the warehouse and work to meet the demands of L&I which, he says, were at times stressful and redundant. 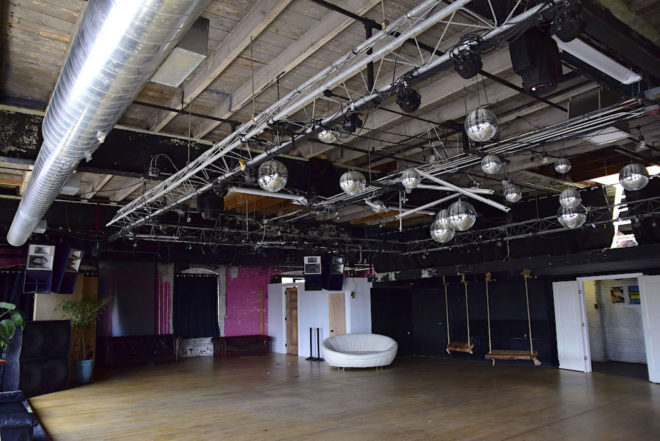 To make matters worse, another venue down the street named itself “Watts Warehouse” and began throwing underage parties that often erupted in violence. “It was a constant battle. There were flyers all over the city while we were getting our permits. It was a nightmare,” said DiRusso. “It was a really bad summer, but I got most of my tenants to come back and we started doing weekend events.” DiRusso bought a liquor license, built a bar to serve alcohol, updated the sound system, and installed new lighting. His original plan was simply a venue that would provided more freedom to event planners, but the project has blossomed into a transformative space that hosts more than just parties.

In 2015, Scott Silver was invited by a group of friends to attend a warehouse rave at 923 N. Watts Street. Silver had just moved back to Philadelphia from NYC and was looking to connect with the city’s startup community. He had just sold a venture-backed business and had time on his hands to explore the area where he was raised. He remembers the lively energy of the venue. For the next few years Silver would hold back-to-back startup meetings in various cafes in North Philadelphia. He found that this business model wasn’t sustainable and connected with DiRusso. The two eventually collaborated on launching a free pop-up co-working studio in the building. 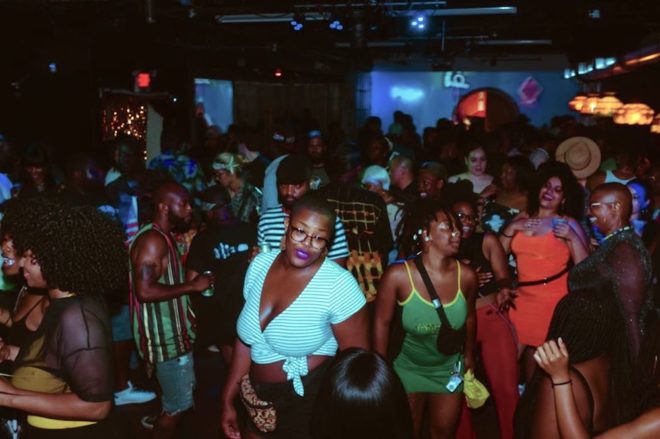 For Sofiya Ballin’s annual WUK Fest the second floor of Warehouse on Watts was transformed into an Afro-Caribbean dancehall. | Photo: Luz Sanchez

For people like Sofiya Ballin, a writer, curator, and storyteller, Warehouse on Watts provided the ideal atmosphere for her WUK (Wine Up & Kukere) Fest. Ballin describes the event as a traditional dancehall party that caters to Philly’s Afro-Caribbean community. WUK Fest was originally held at Girard Hall, but the venue closed and Ballin had to find another event space. Ballin said that finding a venue for Afrocentric parties in the city often comes with discrimination and stereotyping. “You get a sense that the owners believe there is going to be violence and that attracts police attention,” she said. “There can be so many restrictions, especially when facilitating people of color.” Ballin found that most venues reacted to her event with an air of hostility and excessive surveillance. One venue canceled her WUK Fest at last minute, abruptly informing Ballin that they couldn’t accommodate her event. She said that Warehouse on Watts helped her keep the authentic feel of her event while being extremely accommodating. To her, it felt more like a collaboration than just renting out party space.

Richelle Kota Richelle Kota is an immigrant, writer, nature enthusiast, and recent graduate living in Philadelphia. Her work has been published by Calyx Press, Yes Poetry, Peach Mag, Breadcrumbs Mag, Cordella, Visual Verse, and Recenter Press. She aspires to live a very simple life on a farm with many pigs, goats, and dogs. You can follow her on Instagram @tiniestdad and visit her website at www.richelle.work