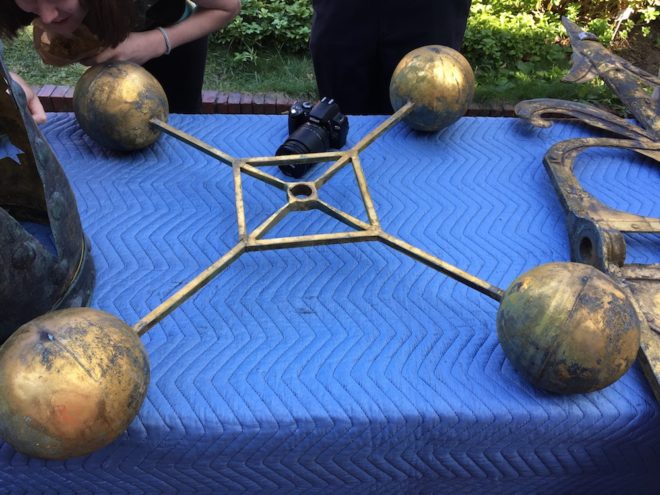 A 265-year-old weathervane from the steeple of Christ Church will undergo restoration. | Photo: Kimberly Haas

The steeple that for over 50 years had been the tallest structure in the United States is getting a facelift. Over the course of six weeks this past summer, scaffolding began encasing the steeple of Christ Church, part of the final phase of a multi-year restoration project that has included interior structural work, exterior masonry, and, beginning today, the conservation of the weathervane that has towered 190 feet over Old City since 1754.

It’s not the first time changes have been made to the steeple or the weathervane, originally designed by architect Robert Smith and funded by a lottery run by church member Benjamin Franklin. The top of the steeple, the spire, was originally capped with a crown of King George III. In 1787, it was replaced by a gilded copper bishop’s mitre. “It was erected to commemorate the consecration of the first American-born bishop, William White, who was also the first Presiding Bishop of the Episcopal Church,” said Reverend Tim Safford, rector of Christ Church. “The mitre has 13 six-point stars, signifying the churches of the 13 states now under a democratically elected bishop, locally grown, rather than under the authority of the King and Bishop of London.’”

A lightning strike and subsequent fire in 1909 and the remediation of structural damage in 1984 are among the incidents that prompted other restorations. 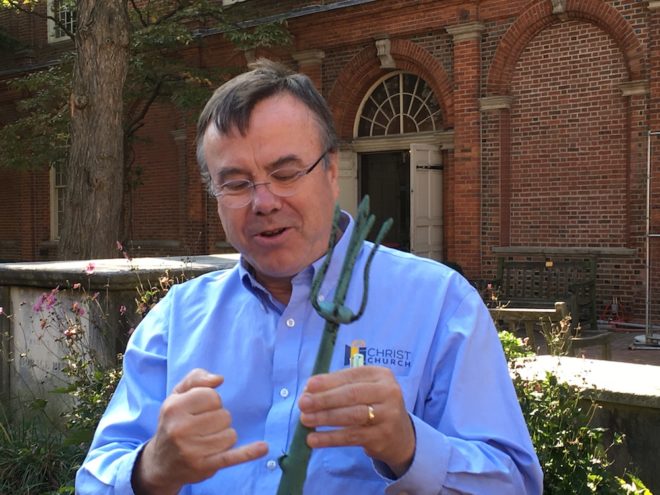 Rev. Tim Safford, rector of Christ Church, holds the scepter that serves as a lightning rod at the top of the steeple. | Photo: Kimberly Haas

On Thursday, September 26, Christ Church staff and volunteers, along with the general public, got a close-up look at the weathervane as parts were brought down from their perch, destined for the Kensington workshop of Materials Conservation.

First came the copper trident-shaped scepter which, at the very top, serves as a lightning rod. Next were three gilded components: the bishop’s mitre, the moveable vane, and the four ball-shaped directionals, each fixed at one of the four cardinal directions.

After removing the old gilt, the parts will receive a coat of primer. “Then we take sheets of gold leaf and apply them with a paintbrush,” explained John Carr, Materials Conservation’s principal conservator. The small square sheets, about three inches wide, are affixed in an overlapping style. “In a certain light, the seams are visible,” he noted.  Carr and his crew similarly restored the gilded statue of Joan of Arc near the Philadelphia Museum of Art, one of six copies Emmanuel Frémiet made of his 1874 original, which stands at the Place des Pyramides in Paris.

At the base, a gilded globe, too large and heavy to safely remove, will be restored in place, as will the wrought iron rod on which all the parts of the weathervane are mounted. 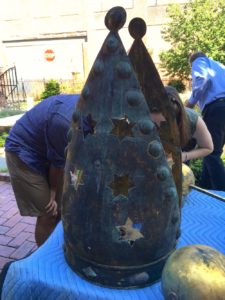 Today’s event was a rare opportunity for people to be close enough to read an inscription on the mitre. Calling the mitre “one of the rarest and most special of the artifacts of the Episcopal Church in the United States,” Safford read the inscription, the lettering faint through the weathered patina. “’The Right Reverend William White, D.D., consecrated Bishop of the Episcopal Church of Pennsylvania, February 4, 1787.’” White served as rector of both Christ Church and St. Peter’s Church at 3rd and Pine Streets and had been Chaplain of the Continental Congress from 1777 to 1789.

Those in attendance were intrigued by another inscription, on the inside of the mitre, which appears to read “P. Josiah Snyder 1869.” Speculating that it might have been the mark of a previous gilder, the church staff and volunteer guides suggested it could be a worthwhile project for a historian to track down.

The restoration project began in 2015 after a study commissioned by the Christ Church Preservation Trust revealed masonry, structural, and protection issues both in the steeple’s interior and its brick exterior tower. The ensuing $4.1 million capital campaign has included major gifts from The Pew Charitable Trusts, the Commonwealth of Pennsylvania Redevelopment Assistance Capital Program, the Color Guard of the Pennsylvania, Society of Sons of the Revolution, and the National Endowment for the Humanities. “However, we continue to receive small donations from individuals who value Christ Church’s place in American history,” noted Barbara Hogue, the Trust’s executive director.

The final phase of the restoration will include restoring cedar roof shingles, painting, and other work and is slated to be completed by the end of December 2019.