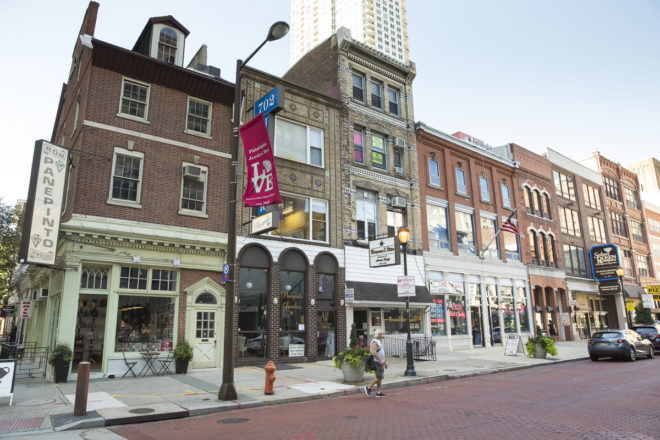 The property owner of the corner building at 7th and Sansom Streets was served multiple violations by the Department of Licenses and Inspection last week for being an “unsafe structure.” The five properties that suburban real estate developers Toll Brothers are planning to demolish are 702, 704, 706, 708, and 710 Sansom Street. | Photo: Ryan Collard

Over three years ago suburban real estate developers Toll Brothers revealed plans to demolish five historic buildings in the heart of Jewelers Row, the nation’s oldest diamond district and a popular historic shopping destination. Now that the purchase is complete, property owners on the row say demolition is set to begin any day. Tenants of 702-710 Sansom Street, some of whom had occupied the storefronts and workshops for decades, were ordered to vacate their spaces at the end of May. Now, as adjacent neighbors prepare for potential structural impacts from the demolition project, the historically designated building anchoring the southeast corner of 7th and Sansom Streets was cited last week with multiple, unexpected violations by the Department of Licenses and Inspection for being an “unsafe structure.”

The violations came as a shock to Richard Le who owns 700 Sansom Street. His property is one of the few remaining original brick row houses on the block, dating all the way back to Carstair’s Row, which was built around 1800 as one of the earliest speculative developments in the city. Le’s building is a charming anchor at the end of the street and a distinctive landmark on the row. It is currently occupied by apartments, Lombard Café, and a nail salon. The property was listed on the Philadelphia Register of Historic Places in 1981.

Le has been anticipating a range of potential threats to his building, aware of the risk that adjacent demolition and excavation pose to historic properties. In the lead-up to the Toll Brothers’ plans for demolishing the buildings next door, he has been taking proactive measures, including documenting the existing conditions and commissioning an independent engineering report. In July, property owners from the block met with Toll Brothers and Councilman Mark Squilla to review the company’s demolition safety plan.

Le’s concern stems from the fact that his property will be isolated at the east end of the street next to Toll Brothers’ planned 24-story tower. The excavation required and resulting load of the tower will be drastically different than that of the existing historic buildings. The process of demolition also poses a threat—the property shares a wall with 702 Sansom Street—and more intrusive demolition methods could potentially harm it. Still, Le is not opposed to the development next door and hopes that his own engineer and architect can coordinate with Toll Brothers to ensure that his building remains safe throughout the process.

When it comes to adjacent construction activity, historic buildings–especially those built as early as 1800–pose a particular set of risks that require special attention and care. Such early row houses were typically built on stone rubble foundations and are particularly vulnerable during excavation and ground disturbance. Party walls were made of early and soft salmon brick, often only two wythes thick, and are more susceptible to water damage when exposed to the elements. They also rely on lateral support from neighboring structures and removing adjacent buildings can lead to bowing and buckling of walls when that support is removed.

To his surprise, Le learned yesterday through an official notice in the mail that his building had been cited with three new L&I violations issued on September 13, 2019. The citations include two unsafe structure violations and one for neglect of a building in an historic district. The notice explains that the building was cited because the “parapet walls at roof line [are] severely out of plumb,” and alerts the owner that they have a five-day window to appeal the violations and 30 days to “make repairs or demolish the structure to remove the unsafe condition.”

Le is currently working with his engineer and architect to develop a response. He plans to do whatever is necessary to address the issue and get the building in order.

Karen Guss, director of communications for the Department of Licenses and Inspections explained by email, “The Philadelphia Code requires all property owners to maintain their properties in safe condition. Violations were issued for 700 Sansom because the parapet on the building is leaning.” 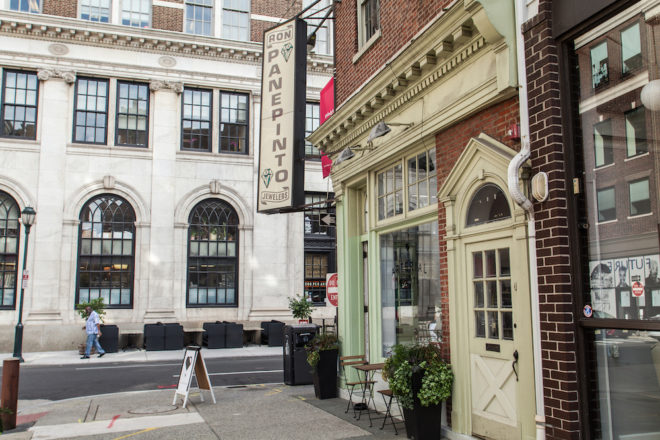 Richard Le, the owner of 700 Sansom Street, was shocked to receive an “unsafe violation” from L&I and is now working with an engineer and architect to address the alleged issue before Toll Brothers begins demolition next door. | Photo: Starr Herr-Cardillo

The community group Riverwards L+I Coalition has been providing Le with support and guidance in preparation of demolition of the neighboring properties. The group shared that, per their findings, Toll Brothers has not been adequately following the code. A representative for the group elaborated that “Demolition is scheduled to begin, but there is still no demolition notice posted, nor has a letter been sent to the closely affected properties.”

Le clarified that he had received a letter stating the demolition would begin sometime after September 6. However, his follow-up requests for updated and detailed versions of the developer’s plans have not been addressed. Ideally, he says, he would be able to supply his team with a more detailed set of plans to review prior to demolition so that both parties felt secure moving forward.

Paul Steinke, executive director of the Preservation Alliance for Greater Philadelphia, has been in contact with Le. “We’ve contacted the property owner and given him contractor references so he can take action to address the problem, which appears to be masonry-related,” said Steinke. “We’ve also been in frequent communication with L&I and the Historical Commission about taking steps to ensure that this fragile historic property is protected in the event of construction activity next-door. We have been given assurances that this risk is being addressed.”

The Preservation Alliance submitted a nomination to designate Jewelers Row as a local historic district back in 2016, which, if approved, would enact much more stringent control over development proposals in the future. The nomination has been awaiting review by the Historical Commission due to push back from property owners within the proposed area who have hired real estate attorney Michael Phillips from Obermayer, Rebmann, Maxwell & Hippel to represent their interests.

A member of the Historical Commission staff clarified that the group has also hired an independent architectural historian George Thomas to write a response report to the nomination and that the Commission will wait to review the nomination until the report is completed. Mr. Phillips spoke at the August 9 meeting of the Historical Commission and estimated that the report will be ready in the fall. Review of the district nomination has been tentatively put on the agenda for December 5.

In the meantime, since all of the property owners have been notified and review of the nomination is in progress, any proposed changes to properties within the district’s boundaries must go through the Historical Commission.

Full disclosure: The author assisted in unpaid research that contributed to the Jewelers Row Historic District nomination submitted by the Preservation Alliance for Greater Philadelphia.