Op-Ed: Spreading the Deadbox Gospel, One Bottle Cap at a Time 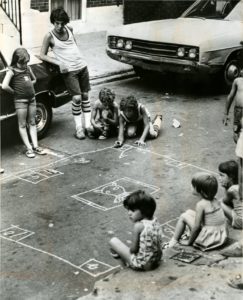 I grew up in Oxford Circle in the 1950s and 1960s, and after out-of-state departures, I returned to Philadelphia in the 1970s and moved to Fairmount. During those years, when I left my row house, I was usually swept up in a stream of neighbors and passersby. Today, residential streets in Fairmount, Oxford Circle, and most neighborhoods are devoid of life. No kids playing games, empty stoops and porches, fewer shoppers at fewer corner stores. To a newcomers this is normal. To long time Philadelphians it is sad and eerie. Although we’ve gained population in recent years, our expanding city is losing touch with its essence—our unique row house culture. But there may be a solution: playing deadbox.

Deadbox is one of dozens of near-extinct Philly games. They were played in streets, driveways, and playgrounds all across the city from at least the 1920s into the 1970s. Although focused on deadbox, this essay could just as easily be written about wire ball, wall ball, hopscotch, chink, stick ball, baby in the air, half ball, double dutch, hose ball, buck buck, and many others.

The beauty and paradox of deadbox is its simplicity and varied forms. This is true of most games as they were developed to fit each street’s physical idiosyncrasies. Thus, rules, and even names, changed by block and neighborhood. In parts of North and West Philly you played “deadblock.” Areas of Kensington and South Philly called it “beeries.” Often the term was “bottletops,” and the NYC variant was “skelly” or “skully.”

Before you dismiss this prayer for the city, let’s be clear: this is not about nostalgia, it’s about culture.  Maybe you’ll take me seriously if I pull out long abandoned credentials. In a previous life I was a PhD sociologist. I even went to faculty parties and gave papers at academic conventions. Ech!

Deadbox was typically played with bottle caps on a chalked cement or blacktop surface. This playing field was usually about 6-foot square, but some squares were twice that size and fields were occasionally rectangular. 12 to 14 numbered boxes were laid out with a skull and crossbones drawn in a large center box i.e. the deadbox. Playing fields might also be painted, and bottle caps were often weighted with candle wax, pennies, street tar, melted crayons, or what have you. Some people played with checkers. I’ve even seen jar lids used on bigger fields.

Learning to play takes 30 seconds, although strategy and skill can dramatically increase with years of practice. Nevertheless, because of the looming presence of the deadbox, a novice will sometimes beat an expert.

Rule variations can be byzantine. The basic idea is to sequentially flick your bottle cap from box 1 to 2 until you reach 14. On my street we shot to 14 and then all the way back to 1. If you land on the line you are not in the box. Advancing to the next box is also done by shooting into another player’s bottle cap.  But if you flick into deadbox–or are knocked in by another player–you start over (or lose turns, or have to be knocked out by a partner, or, or, or… depending on how the old heads set the rules). When you reach the last number (14 or “1 backwards”) you shoot into deadbox and become “poison.” You then proceed to kill your opponents by flicking your poisoned cap into theirs.

How did such a fun, easy, cheap, creative, fascinating, and diabolical game die? There are many culprits. Topping the list are video games. When Atari and Nintendo gained popularity in the 1980s, it was quickly evident that kids were playing indoors with game consoles rather than outdoors with chalk. This electronic focus has only increased as online video gaming and social media have been engineered for addiction, and the digital world has enveloped our lives. A kid walking down the street is more likely to be buried in a screen than bouncing a ball. And if the Ray Kurzweil-types in Silicon Valley bring about their “Coming Singularity” by century’s end, calling that machine-like creature a “kid” may be a misnomer. 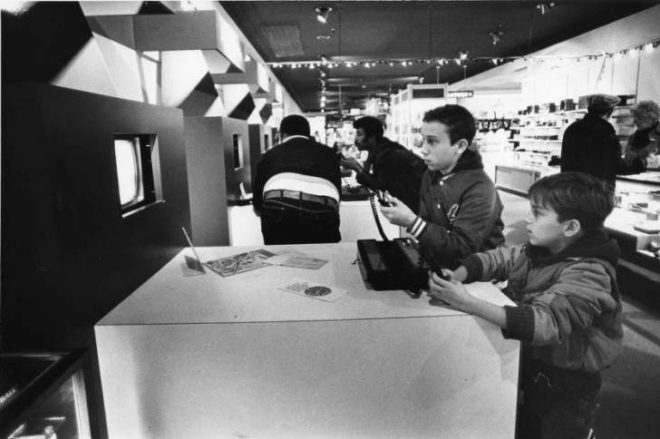 But technology is only part of the story. Parenting has changed to scheduling play dates and planning after school activities. Parents, particularly dual-breadwinning parents, understandably fear letting kids freely roam the city. But many of these same parents were part of an earlier generation that invented creative games from trash and learned about communication, empathy, and leadership without adults supervising their leisure. That generation might have wandered the city, but there were still eyes on the street. But the missing eyes go way beyond parenting. They’re a function of sending old folks to senior living. The breakup of extended families and “it takes a village” neighborhoods. Loss of local business to big box stores and internet shopping. New stoop-less, Lego-like construction emphasizing decks, garages, and central air. Airbnb, VRBO, and gentrification. Closing of neighborhood factories. The decline of public space. Perhaps streets are more dangerous today, but, if so, its due to an ironic, self-fulfilling truism: streets feel riskier, and duller, when fewer people use them. Just ask Jane Jacobs.

In Philadelphia, we try, often halfheartedly, to preserve our streetscape and wealth of historic buildings. Despite our failings as preservationists, we still value “high” architecture over vernacular creation. Yet, that viewpoint is changing. Thanks in part to Robert Venturi, Philly native son and father of postmodern architecture, we are more appreciative of common man creations. There are increasing numbers of people, both locally and nationally, who are saving diners, neon signs, storefronts, motels, and outsider art environments like Philadelphia’s Magic Gardens. 15 years ago such structures were routinely demolished with minimal public outcry. This might still be the case if not for the expanded consciousness that Venturi, John Rauch, Denise Scott-Brown, and Steven Izenour helped foster right here in Philly. But to “learn from Philadelphia,” like Venturi did with Las Vegas, we should apply their perspective to a wider body of folk creation. Are Major League teams, Broadway theater, and other mainstream forms of passive entertainment really more significant than lowly, but participatory, street games?

The importance of such games in defining mid-century Philadelphia is apparent not just in their citywide adoption, but in the strength of that experience. Ask anyone who grew up playing deadbox (or any street games) about that experience. Their reaction is likely to be surprisingly intense, even visceral. You are not inquiring about a game, but a way of life—a notion of what it was like to live in a row house culture in which social interaction was paramount. The answers you’ll get go beyond “good old days” nostalgia. Many things were horrible in those days. But what was notably different was that communities were linked by personal social interaction–on your block, on the corner, on the shopping street, on the job. 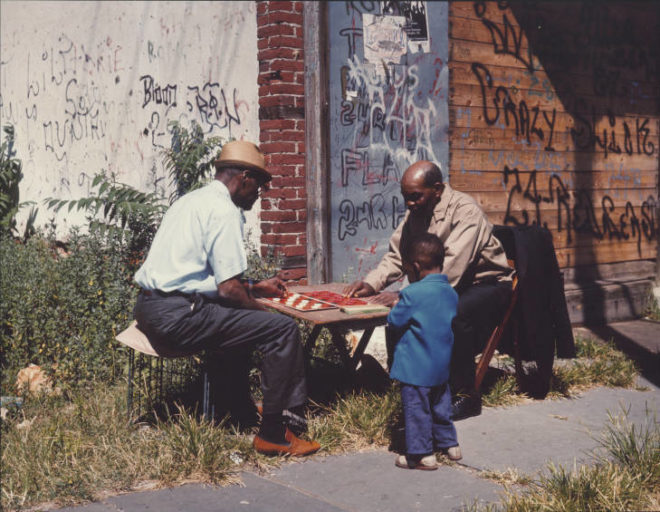 This is all the more important because of the breakdown of social structures. How many neighbors do you know on your block? Do you belong to unions, clubs, or fraternal organizations? How much time do you interact with computer or phone screens? Are you comfortable talking with people of other social classes, races, political perspectives? Can your kids listen, communicate, and empathize, or are they moving into a cyber world in which these human traits are disappearing?

Resurrecting Deadbox for the 21st Century

I’m not arguing against modernity. Rather, I’m trying to foster communication and community in what is supposed to be, and once was, “the city of neighborhoods.” Returning to the streets to play deadbox—whether you are 5 or 75-years old–is as good a way as any to resurrect Brotherly Love and Sisterly Affection. For me, bringing back deadbox is a personal investment. After spending several years and thousands of dollars, the stage is set to reap the return–not in dollars, but in community. I’ve created a portable, vinyl deadbox for year-round indoor and outdoor play. It’s labeled “Philly Classic Edition” because it includes local photos corresponding to each number: #2–Mummers on 2 Street, #3–Pep Boys, #13–Wilt, etc. A history lesson with every game. There will be more editions, made by me or others. The idea is not copy written. How about a deadbox of Philly neighborhoods or breweries?  Maybe one of local singing groups or Philly foods?  There are limitless possibilities. I hope somebody makes a fortune on the idea. 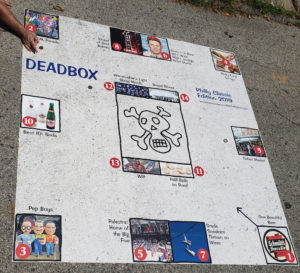 Mine will be sold at cost and given away to organizations who want to teach the youth. So far, I’ve tested the concept by unrolling the game at city hangouts: the Singing Fountain in South Philly, Broad Street during Philadelphia Free Streets, Fairmount Avenue in front of Eastern State Penitentiary, Lloyd Hall on Kelly Drive. So far the response has been fantastic. I’ve played with visitors from the Middle East and dudes from Snyder Avenue. I heard Overbrook basketball stories from a guy who grew up with Wilt, and I’ve taught 5 and 60-year-olds to play in the same game. I’ve encountered rules and variations I had no idea existed.

The only negative was at a pop-up on the Benjamin Franklin Parkway in July. The situation looked ideal. Next to mini golf, not far from a sand box, in view of the beer garden. But I was told by a City supervisor in charge that I couldn’t play for liability and insurance reasons. I enjoyed the argument, but eventually rolled up my game and left. Might a kid get injured by a bottle top?

Undeterred, I am moving forward. I’ll be teaching the game at Thirsty Dice in Fairmount on September 28 and at Lancaster Avenue Day on October 5. And one of these days I’ll probably show up in your neighborhood, city-willing.

Hidden City op-eds give readers, contributors, and staff of Hidden City Daily the opportunity to share their thoughts on topical issues with smart, engaging discussion. Have an idea? Drop us a line and join the conversation: [email protected] 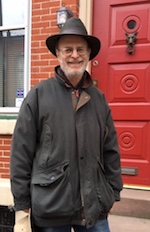 Len Davidson Lacking NBA point guard talent, Len Davidson became an urban sociologist. While teaching at the University of Florida, he created a roadside themed restaurant with a neon ceiling which helped assure he didn’t receive tenure. Davidson returned to his native Philadelphia and developed a prominent neon design business along with a large sign collection known as the Neon Museum of Philadelphia. His collection will have a new home this winter at Nextfab’s coming site on North American Street. A Fairmount resident, Davidson co-founded the Philadelphia Dumpster Divers art collective and has travelled and written extensively on folk/outsider art. His 1999 book, Vintage Neon, is an essential volume for neon aficionados.