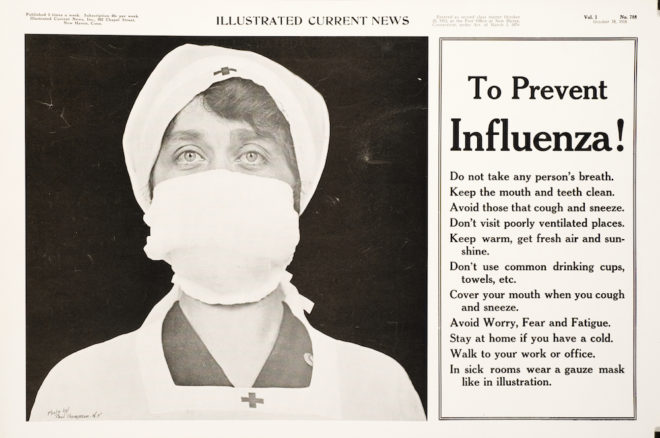 Instructions on how to prevent the spread of Spanish flu published by Illustrated Current News in October 1918 when the pandemic first began to spread. | Image courtesy of the Mütter Museum

In a city full of big, well-known historical events, the Mütter Museum is mounting an exhibition of an incident of a century ago that remains largely unexplored in a contemporary context. Spit Spreads Death recalls the Influenza Pandemic of 1918-19. “It’s been called ‘the forgotten pandemic,’” said guest curator Jane Boyd. “It wasn’t something people wanted to remember, alongside the trauma of World War I.”

While it may seem in line with the often macabre nature of the Mütter Museum’s collections, there is more on the organization’s mind than just highlighting an obscure, albeit tragic, episode in medical history. “We’re holding up 1918 as a mirror to our thinking about the present day and the future,” said Robert Hicks, director of the Mütter Museum.  “We’re asking people to reflect. Think about now, with ebola, measles, and what else might be coming.”

Today, the flu is largely seen as a routine ailment: a strain arises every year, and every year medical researchers create a vaccine. So it might be hard for people today to fathom the destructive scale of the 1918 Influenza Pandemic, often referred to as the Spanish Flu. Infecting some 500 million people throughout the world, it caused somewhere between 50 and 100 million fatalities, making it one of the deadliest epidemics ever.

Several factors contributed to the extreme lethality of this particular flu strain. The scope of World War I, with massive troop movements and armies housed in close quarters, created huge outbreaks in Europe. Increases in global commerce also spread the disease, even to remote island nations.

It was also an unusual strain of the virus, uncharacteristically killing young adults in greater numbers than the elderly and very young, the flu’s more typical victims. Nearly half of the fatalities in the U.S. were among young adults aged 20 to 40 years old.

Philadelphia was especially hard hit among American cities, with about a half million people, or nearly a quarter of the population infected. There were a total of 20,000 recorded deaths. A contributing factor was an event that took place on September 28, 1918. On that day, the city held the Liberty Loan parade to encourage citizens to purchase Treasury bonds in support of the war effort. “All those people in close quarters, breathing the same air. It just took off after that,” said Hicks, noting that in the six weeks following the parade, Philadelphia averaged one death every five minutes. 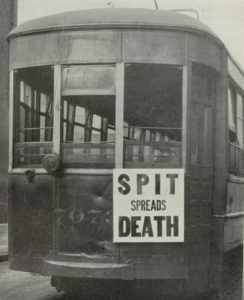 Anti-spitting sign on a Philadelphia Rapid Transit Company train car. In 1918 all cars were disinfected and kept well ventilated for public safety. | Image courtesy of the Mütter Museum

The name of the Mütter Museum exhibition is taken from that parade. The curatorial crew found photos of signs with the slogan “Spit Spreads Death” plastered on lampposts around the city, right over those promoting the parade. “The flu spread so quickly, they hadn’t even taken down the Liberty Loan banners,” said Hicks. Health officials encouraged people to wear masks in public, to stay home as much as possible, and to avoid spitting in the streets. Bars were ordered to remove their spittoons.

After that deadly October, the number of new cases in the city dropped precipitously, almost disappearing entirely by Armistice Day on November 11. While scientists mobilized in the aftermath and began the search for a vaccine, it seemed as though the rest of the world wanted to forget the outbreak as quickly as possible. “After it came and went and ravaged the world, there was no review,” said Hicks. “In a larger cultural sense there was no reflection or reckoning.”

“Why was there no symphony or artistic work?,” Boyd asked, noting that Katherine Ann Porter’s short novel Pale Horse, Pale Rider was nearly the only exception, although there has been much non-fiction writing and historical research published about it.

The exhibition opens on October 17, with items that illustrate medical care at the time and period photographs that document the pandemic. “It’s hard to commemorate diseases. Wars get monuments, diseases don’t,” said Boyd. “It didn’t leave many artifacts behind. People mourned in private.”

Two interactive stations have also been designed for the exhibition. “We used about 12,000 death records to map the progress of the pandemic,” explained Boyd. “With one interactive, you can animate the deaths over time, and filter them according to gender, race, or age. With the second, you can search four neighborhoods that were especially hard hit and see photographs, biographies and landmarks. She said the museum intends to offer both online next year.

Those four neighborhoods will also be the focus of walking tours about the pandemic, developed by writers and staff of Hidden City Philadelphia. Each represents a different population within the city at the time: Bella Vista (Italian), Graduate Hospital (African American), Brewerytown (German), and Kensington (Irish).

In addition to mapping the progress of the pandemic, the death data will also be used to memorialize the deceased. On September 28, the 101-year anniversary of the Liberty Loan Parade, the Mütter Museum and Blast Theory, a troupe of interactive artists from England, will lead a parade commemorating the Philadelphians who perished in the pandemic. Members of the public can sign up to represent one of those people. Other participants will include staff and clients from grassroots community health organizations. Beginning at Marconi Plaza at 5PM, the parade will head up Broad Street to City Hall to conclude in Dilworth Park, the actual route of the original 1918 parade.

In addition to the marchers, the parade will feature moving light sculptures and music played back via participants’ cell phones and speakers on the parade float. Pulitzer Prize-winning composer David Lang has written a new work for the event that’s been recorded by the Philadelphia-based chamber choir The Crossing, with texts drawn from the names of victims and government advice from the pandemic, like “Keep the feet dry.” 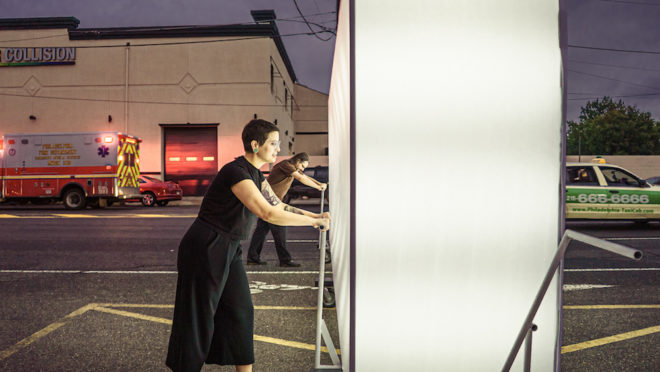 Interactive artists group Blast Theory rehearses in preparation for the Mütter Museum’s influenza parade on Saturday, September 28. The event starts at Marconi Plaza at 5PM and will proceed down Broad Street to City Hall. | Image courtesy of the Mütter Museum

“Each singer has their own melodic pattern as they intone 27 or so names so it turns into a choral chant,” explained Donald Nally, conductor of The Crossing. “And there’s a little intended inaccuracy in the playback over the phones so it creates a shimmering sort of effect.”

While recording it, Nally and the singers had a strong reaction to the piece, one likely to be shared by the parade participants. “It gets under your skin, singing words from 1918 about people who died, but didn’t need to.”

Blast Theory will produce a film of the parade, interspersed with photographs of the 1918 parade, which will be shown as part of the exhibition.

As another interactive component for the show, the Mütter Museum has begun collecting Philadelphia family stories about the pandemic. “I didn’t expect so many stories to surface,” said Hicks, seeing it as an overdue commemoration of the victims. “Back then, no one ever asked.”

To that end, the exhibition goes beyond simply recounting the history. “We want people to think through the tragedy, to get a kick in the gut learning about it and then consider constructive steps they can take today,” said Hicks. “The aim is to have people ask ‘What if a pandemic happens again today? How would it change my life? What is my responsibility?’ The behavior of individuals is always going to decide what course a pandemic takes.”

Unlike in 1918, today governments and the health industry has emergency plans in place for all kinds of crises. “Where the conversation isn’t happening yet is at the personal level,” noted Hicks. “We don’t consider what we would do personally if something like this happens again.” He pointed out that many people are now accustomed to participating in active shooter training in their workplace, but “we don’t think about what we should do if a disease suddenly descends upon us.”

For more information about Spit Spreads Death, and how to sign up for Saturday’s influenza parade, see the Mütter Museum’s exhibition website HERE.