Bootleggers & Back Alley Bars: Philadelphia During Prohibition a City “Soaked In Alcohol” 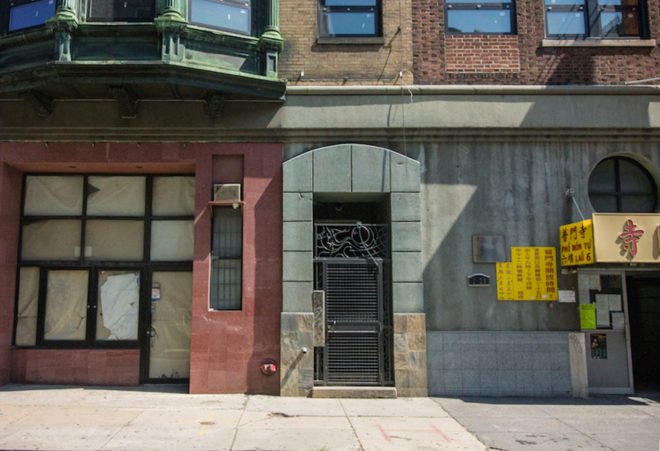 Nothing to see here, folks. The mysterious, nondescript entryway of Hop Sing Laundromat cocktail lounge. The neo-speakeasy opened in Chinatown in 2012. Three years later Condé Nast Traveler named it one of 30 best bars in the world. | Photo: Michael Bixler

As the mother of a 20-something, I am sometimes clued into trends that might otherwise escape the notice of a typical 50-something. For example, according to my daughter, speakeasies are back in fashion. Bars hidden down back alleys, behind unmarked doors, and in secret basements are all the rage in Manhattan where she lives. As I learned with the help of Google and Yelp, Philadelphia also has its share of trendy, semi-secret places to gather and drink. The Ranstead Room behind El Rey on Chestnut Street, Hop Sing Laundromat in Chinatown, and Kontrol in Midtown Village are a few of the clandestine spots where one can sip a swanky cocktail and soak up a 1920s vibe.

As a historian, I am intrigued that the revival of the speakeasy is happening exactly 100 years after the beginning of Prohibition. The 18th Amendment banning the production, sale, and distribution of alcohol was ratified in 1920. Pennsylvania, however, outlawed liquor in 1919. But the banning of alcohol did very little to reduce its availability, especially in Philadelphia.

In the immediate aftermath of Prohibition there were scattered raids against establishments such as breweries and taverns, but the impact was minimal, and liquor continued to flow. My grandfather, then a student of chemical engineering at the University of Pennsylvania, was among the scofflaws. He recalled bootlegging liquor to sell to the Wharton students as what would today be called a side gig. Indeed, many downtown hotels—known as easy places to get drinks—saw an uptick in guests because the more stringent enforcement of the Volstead Act in New York City gave Philadelphia a competitive advantage in attracting business meetings. 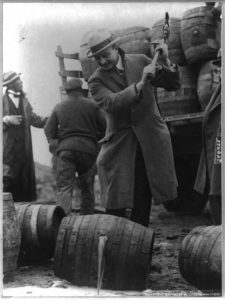 This photograph from 1924 shows Smedley D. “Duckboards” Butler, Philadelphia’s public safety Director, destroying kegs of beer with an axe. | Image courtesy of the Library of Congress

As the city remained “soaking wet,” Philadelphia’s City Council refused to augment funding for the police force. In 1924, Mayor W. Freeland Kendrick sought federal help and was permitted by President Calvin Coolidge to hire Brigadier General Smedley Darlington Butler as director of public safety. With Butler in charge, there were raids at over 2,500 illegal establishments in 1924, a dramatic spike up from just 200 raids in the prior year.

A single page of a 1924 Philadelphia police log book reveals that illegal liquor production and consumption took place across the city and in a variety of venues. The Ritz-Carlton Hotel on South Broad Street, a saloon at Front and Cambria, a barbershop at Lycoming and Fairhill, a candy store at 27th and Fletcher, a drug store at 44th and Stiles, and a cigar store at Front & Vine are all listed in the ledger of places raided by Butler’s forces.

Butler’s valiant and extensive efforts to enforce Prohibition proved quixotic. Although Butler went as far as installing spotlights on City Hall to literally shine a light on crime, his efforts were undermined by magistrates, ward leaders, politicians, police officers, and ordinary citizens. Butler left the city in disgust at the end of 1925, calling Philadelphia the “cesspool” of Pennsylvania. Said Butler upon his departure, “I have been fighting in a battle where the head of the show was disloyal and everything was crooked.” In spite of Butler’s low opinion of Philadelphia, a bronze plaque honoring his service still hangs in City Hall.

With the occasional arrest here and there—and the even less common trial and conviction—alcohol continued to be served in homes, restaurants, corner bars, nightclubs, and dance halls throughout the 13-year duration of the 18th Amendment. In addition to the formerly legitimate liquor selling establishments, thousands of underground and black-market venues, including speakeasies, were opened and operated by bootleggers and criminals.

The major change wrought by Prohibition in Philadelphia was that organized crime took an increasing, and often violent, stake in the production and distribution of the forbidden drink. Political corruption rose in tandem with organized crime as the Republican political machine tightened its grip throughout the 1920s. And, sadly, about 10 to 12 imbibers a day lost their lives to poorly produced bootleg liquor. 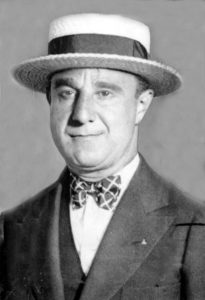 Among Philadelphia’s notable bootleggers was the wonderfully nicknamed Max “Boo Boo” Hoff, also known as “King of the Philadelphia Bootleggers.” Hoff was born in 1892 to impoverished Russian Jewish immigrant parents in South Philadelphia. He ran a small-time gambling club in what would become Society Hill and was manager for several prize fighters. During Prohibition, however, his fortunes soared as he became one of the wealthiest bootleggers in the country.

Hoff owned numerous night clubs including Club 21, a speakeasy housed in a turreted building that still stands at 1321 Locust. Across the street was Huff’s Sylvania Hotel (now the Arts Condominium), a destination for thirsty guests and notable gangsters. Although Hoff himself did not drink, he threw elaborate, liquor-fueled parties attended by prominent athletes, entertainers, and underworld figures. Even Al Capone is said to have been entertained by Hoff at the Sylvania. Capone, like many of Philadelphia’s Prohibition-era gangsters, served time in Eastern State Penitentiary.

It was also at the Sylvania Hotel that Hoff ran his operation that diverted industrial alcohol from its intended purpose. To protect his lucrative production and distribution network, Hoff bribed police officers and Prohibition enforcement agents. As in other bootlegging schemes, these officials in turn paid off superior officers, ward leaders, and magistrates.

Hoff laundered his ill-gotten money through his Franklin Mortgage and Trust Company headquartered on 18th Street near Sansom Street. The Franklin Bar, inconspicuously located on the second floor of Byblos, is perhaps the only latter-day speakeasy that can boast a direct link to Prohibition. A mural on the bar’s dimly lit walls depicts Hoff watching a boxing match.

In 1928, Edward Goldberg, founder of the military supply company that became I. Goldberg, was arrested for selling machine guns, sawed off shotguns, and bulletproof vests to “Boo Boo” Hoff. However, the bootlegger was not charged in the case. 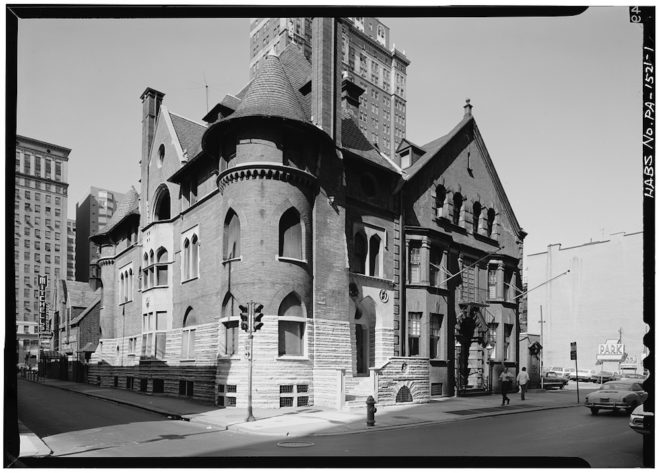 The Charles B. Moore House at 1321 Locust Street circa 1970s. The distinctive, historic home was built in 1890 and designed by Philadelphia architect Wilson Eyre. During Prohibition Max “Boo Boo” Hoff ran his speakeasy, Club 21, out to the house. The building still stands today. | Image courtesy of Library of Congress, Historic American Buildings Survey

In spite of being called before a grand jury eight times during an investigation in the late 1920s, Hoff managed to avoid indictment. Once the Volstead Act was repealed, however, his fortunes plummeted as he lost his main source of income. Hoff was sued for back taxes by the IRS and had to forfeit his lavish Cobbs Creek residence. Although he eventually opened the Village Barn, a small dance club near the University of Pennsylvania, Hoff never regained anything close to his Prohibition era wealth and was even arrested for trying to use a counterfeit $20 bill at 30th Street Station.

In 1941, Hoff was found dead at age 48 by his second wife in their modest apartment at 4723 Larchwood Street. His obituary in the New York Times describes Hoff as someone who “climbed from street urchin to king-pin racketeer, only to end up as the part owner of a juke-box jitter-bug dance place.”

If you want to learn more about Philadelphia during the Roaring Twenties and beyond, tune into WPVI TV Channel 6 at 7:30PM on Thursday, September 19 to see the broadcast of “Corrupt: 1920-1940,” part of the “Philadelphia: The Great Experiment” series. See the preview below:

One final thought about the recent proliferation of speakeasies. As I pointed out, this revival is occurring 100 years after the beginning of Prohibition, but perhaps that is merely a coincidence of chronology. I wonder, though, if the greater significance of the timing is the legalization of marijuana. Perhaps people, especially those who are young, hip, and looking for fun, prefer to feel a twinge of the illicit when out on the town. With state-run liquor stores still in Pennsylvania and medical marijuana dispensaries opening shop, maybe slipping down a dark alley toward an unmarked, secret door is a fitting choice for an enjoyable and slightly naughty night out with friends. Cheers.