Philadelphia is a city that loves its history, as evidenced by the number of public and private institutions devoted to the preservation of our past. And therein might lay a problem. With so many players, who is there to take the lead, to create a vision, and prevent duplication of efforts? That was one impetus for a massive review that just marked its 10th anniversary, “Historic Preservation in 2020: A Strategic Vision and Strategic Initiatives,” a summary report and action plan published by the Preservation Alliance for Greater Philadelphia in July 2009.

“There were lots of different actors and players—public sector, private sector, non-profit,” recalled Randall Mason, associate professor of historic preservation at the University of Pennsylvania and co-author of the report. “We wanted to think about them working together. What are the connections that aren’t there, that should be there? Are there relationships that need to be improved or reconnected?”

That disconnect was also felt within preservation organizations, according to Mason’s co-author, John Andrew Gallery, who was then executive director of the Preservation Alliance. “I wanted to find a larger framework to which the Alliance’s activities could contribute. We were doing a lot of different things, but we didn’t have a larger vision guiding us into which those pieces could fit.”

Gallery and Mason thought that, in order for the field to flourish, a broader role for historic preservation was needed. “I’d always felt that people had a very narrow view of historic preservation: you pick out individual buildings and the Historical Commission protects them,” explained Gallery. “To me, preservation was part of economic development, providing affordable housing, neighborhood revitalization. And I wanted to get people—particularly people in public agencies– to see preservation as a more pervasive issue.”

Mason added, “We were trying to build a foundation to create a real robust preservation plan. It was meant to be a participatory process to find out what people wanted out of preservation and not just assume that the old goals of taking care of beautiful historic buildings would be the next generation’s goals.”

In 2008, when Gallery assembled the group to tackle the issue, he was spurred on by two other initiatives in the city. “I knew the Planning Commission was starting their Vision 2035 process, and I wanted to find a way to make historic preservation a strong part of that effort,” he recalled. “I was hoping for a change in attitude on the part of the Planning Commission, for them to see historic preservation as a component of planning. I also knew the City was about to redo the zoning code and, again, I wanted to influence how historic preservation would be represented in those zoning codes and their application.”

As they began their work, the group was confronted by what seemed like an obvious omission in the preservation work that had been and was being done in Philadelphia: no citywide survey of historic resources had ever been done.

Mason recalled that, in the midst of the recession, the group acknowledged the need for a survey, but also that it wasn’t likely to happen. “The feeling was, ‘Yeah, that’s a great idea, but who’s going to pay for it?’ That’s going to cost a lot and that sounded different in 2009 in the post-recession, when there were a lot of other urgent problems that needed to be addressed in the city. So, I don’t think there was a receptivity to thinking about these longer-term issues.” 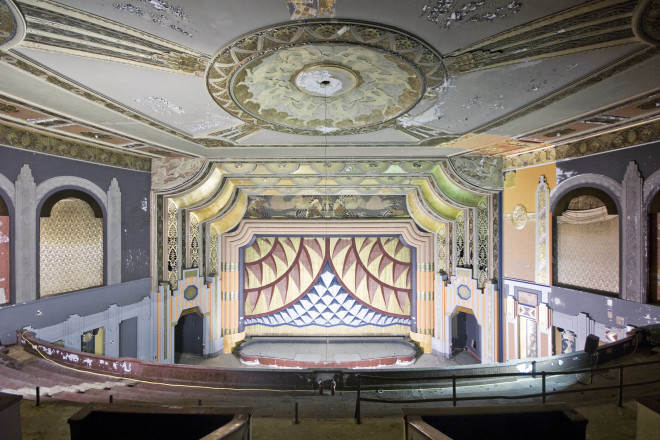 The 13 year fight to save the Boyd Theater ended with the City permitting Philadelphia’s last grand movie palace to be demolished for new construction in 2015, save for the building’s facade. It has since become the poster child and harbinger of Philadelphia’s current historic preservation crisis. | Photo: Chandra Lampreich

Later, Gallery sought to overcome the funding obstacle by engaging residents and neighborhood organizations. To assist them, he wrote a handbook, “How to Look at Your Neighborhood: A Preservation Alliance Guide for Community Organizations,” with which lay people could document and analyze the physical characteristics and assets of their neighborhood to contribute to a development plan or historic designation.

Yet, 10 years later, although parts of Philadelphia have been surveyed, the lack of a complete survey of of the city’s historical resources remains a big issue. It came to the fore again in 2017. Mayor Jim Kenney, now out from under the recession and facing a new construction boom and gradual rise in population growth, convened the Philadelphia Historic Preservation Task Force. Then group was charged with finding “actionable recommendations to help balance preservation and new construction” noted chairman Harris Steinberg, professor of architecture at Drexel University, in its final report issued in March this year.

Randall Mason also served on the Task Force and felt the thinking about a complete survey had evolved. “It can’t be a static list. We need an inventory system to manage the data,” he said. “It’s not as if you go out and look once and can find the answer for all time. The question of which buildings are historic enough to be regulated, that’s going to change in 10, 20, or 30 years.” He said he believes the City has already started work on this inventory and framework.

Historic preservation as a tool in neighborhood revitalization was another concern in the Preservation Alliance’s 2020 report. Gallery cast it as another reason preservation issues need to be part of the conversations about planning and development. For him, it is one of the disappointments as the report’s target date of 2020 draws near, citing the doomed future of five buildings to be demolished in the heart of Jeweler’s Row as a contemporary example.

Today, much of the focus of neighborhood revitalization is different that it was in 2009. “Now, it’s changed from revitalizing neighborhoods to managing gentrification and the issues that go along with it,” said Mason, suggesting the Task Force was a response to the several recent high profile demolitions of churches and other buildings around the city. “It gave a vivid image of what could be lost if we weren’t more serious about asking historic preservation questions as the city began changing more dramatically and more quickly. That’s not just protecting against change, it’s designing a certain kind of change.”

Today, co-authors John Andrew Gallery and Randall Mason have somewhat different views on the overall success of the Preservation in 2020 report. Gallery felt there wasn’t a lot of support for the broader ideas in the report, to integrate historic preservation more fully into the work of the City and to coordinate and support the various players involved in historic preservation. Mason thinks the later Task Force continued that by focusing too heavily on the City’s role. “That’s only a partial solution and would never be a full, robust preservation plan. I won’t say it neglected the other issues, but it certainly didn’t center on them.”

Both acknowledge most of the recommendations in the Preservation Alliance’s 2020 report have not been achieved, underscored by the 2019 Task Force reiterating many of them, with Gallery expressing disappointment at the lack of progress. Mason, on the other hand, calls himself  “a glass-half-full kind of guy,” and noted “that on the difficulties of trying to reach consensus on some of these issues, like how preservation fits into our current and future image of the city—the City, the public, the preservation community and the task force have done some tough work. Now, a number of these recommendations are in City Council’s hands and will be taken up in September. So, I think it’s a moment of optimism.”