From Flophouse to Fairfield Inn: Memories & The Makeover of a Troubled Hotel 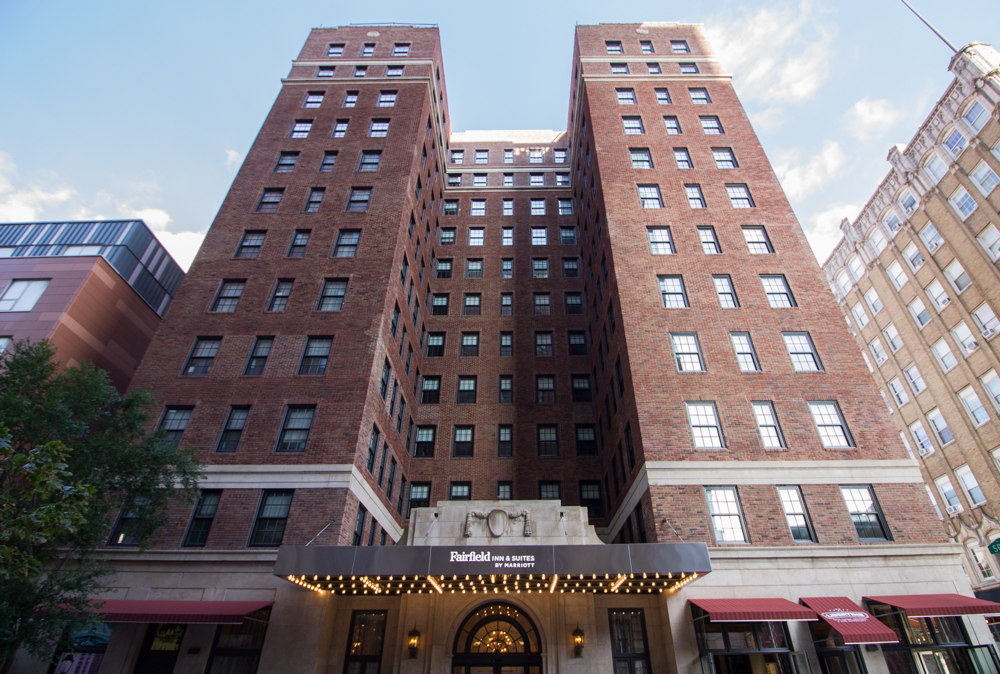 When I was a kid I thought my grandparents, Sam and Anna Friedman, owned the northeast corner of 13th and Spruce. It was there that they ruled over a kingdom of prescription drugs, Good & Plenty licorice candy, Chanel No. 5 perfume, and a lunch counter dishing out Cherry Cokes and hamburgers. I would later come to understand that they didn’t actually own the Parker Hotel Pharmacy, nicknamed “The Store,” but leased it from the adjacent hotel. I also eventually learned that “Doc,” which my grandfather was dubbed by customers, wasn’t his real name. As much I had free reign of the drugstore, including guzzling milkshakes and stuffing my pockets with candy, lipsticks, and magazines, the Parker Hotel lobby next door was strictly off limits. “If you need to use the bathroom, go to the house,” my grandmother would say. That meant a half-block walk. It also meant leaving to my imagination the phantom dangers that lurked inside the forbidden Parker Hotel.

Bad reputation aside, it wasn’t always this way. When the pharmacy first opened in 1932, on the heels of the Great Depression, the hotel was an asset to the neighborhood. The 12-story building, known then as the Spruce Hotel, was built in 1923 in the Art Deco style with a touch of Colonial Revivalism. Its 209 rooms with shared baths were rented to single “gentlemen.” Across the street, the Lenox, built in 1916 in the Colonial Revival Style, was (and still is) one of the most elegant apartment buildings in  Washington Square West. The pharmacy’s success was ensured from the start by the solid middle class neighborhood and proximity of the Academy of Music, Shubert Theater, and upscale shops. There was a posh furrier on 13th Street between Spruce and Pine in what is now a dubious fortune teller’s storefront. This wasn’t my grandfather’s first pharmacy. He started out in Strawberry Mansion, but Parker Hotel Pharmacy would be his finest. It sold luxury perfumes, Vogue magazine, Whitman’s Chocolates, and Cuban cigars. Many Spruce Hotel residents took their meals at the pharmacy’s lunch counter which, through the 1940s, served a Blue Plate Special dinner on fine china. 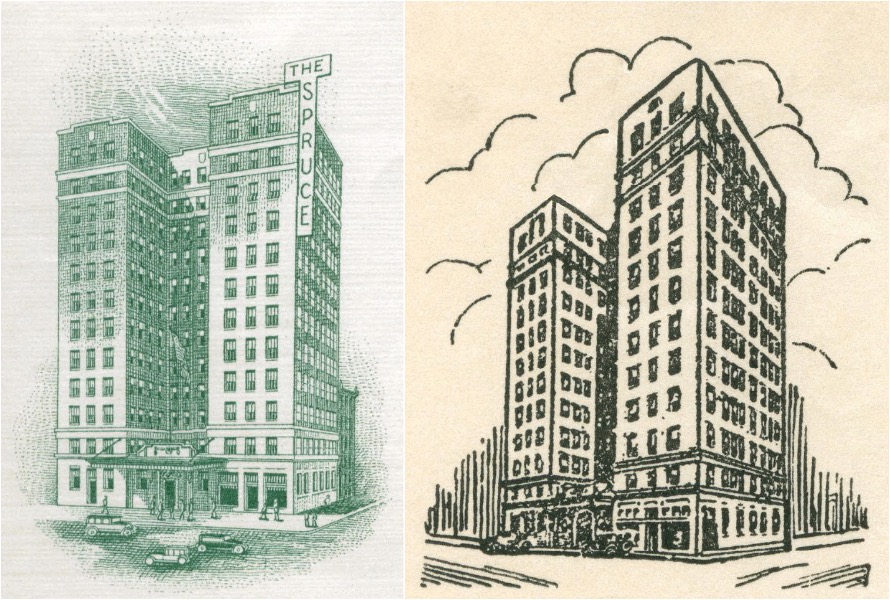 Spruce Hotel stationary from 1927 (left) and 1933 (right). | Images courtesy of the Athenaeum of Philadelphia

It wasn’t until the late 1950s, when the Spruce Hotel was sold to a new owner and became the Parker Hotel, that the hotel began to change. No longer a long-term residence for working men, it catered to traveling jazz musicians and theater people. Although it was not yet known as the Gayborhood, the area had no shortage of lively bars and my grandmother would shoo me away from the counter when drag queens would stop in to purchase cosmetics and extra-large stockings. It was a colorful, creative era for the hotel that would eventually take a turn for the worse.

By the 1960s, the Parker Hotel was a drug-infested hell hole that rented out rooms by the hour to addicts and prostitutes. The one-week rate was $17. Around this time, my grandfather was mugged while closing the pharmacy, leaving him with a permanent goose egg on his forehead. With serious doubts about the future of the hotel, Doc Friedman retired in March 1967 after 35 years of running his pharmacy at 13th and Spruce.

50 years later, the Parker Hotel Pharmacy became The Westbury, a popular, neighborhood gay bar. Property values soared. Within one block there was the Wilma Theater, the Kimmel Center, and a growing list of fancy, new restaurants. Yet, in spite of the gradual gentrification of the Gayborhood, the Parker Hotel continued to fester. 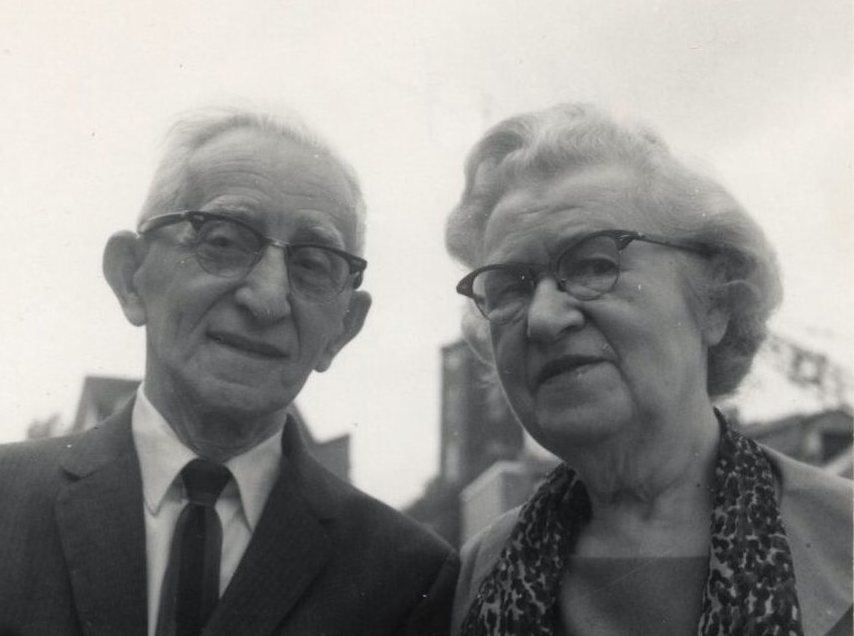 Sam and Anna Friedman in 1962. | Image courtesy of Stacia Friedman

After a small fire in 2014, the hotel was sold to the Wankawala Organization for $3.47 million. Ironically, Wankawala was the same company that had managed the Parker Hotel during its death throes through the four years leading up to the fire. The relationship between the Wankawala Organization and the Washington Square West Neighborhood Association, which was hostile from the start, became volatile as non-union construction sent clouds of dust, debris, and an awful stench into surrounding apartments. The department of Licenses and Inspections shut down the construction site. A project that should have taken two years dragged out to three, then four. In 2016, a union picket line with gigantic inflatable rats added to neighbors’ grievances.

When the renovated Parker Hotel finally reopened as the three-star Marriott Fairfield Inn & Suites in May 2018, I had to see it to believe it. To me, it seemed totally implausible. My first impression was positive. The original stone and metal marquee had been faithfully restored. Gas lamps on either side of the entry were a nice touch. The adjoining Libertine restaurant, my grandparent’s former pharmacy, added charm to the corner with Parisian tables and chairs. Unfortunately, the restaurant’s interior décor looked as impersonal as an airport bar. 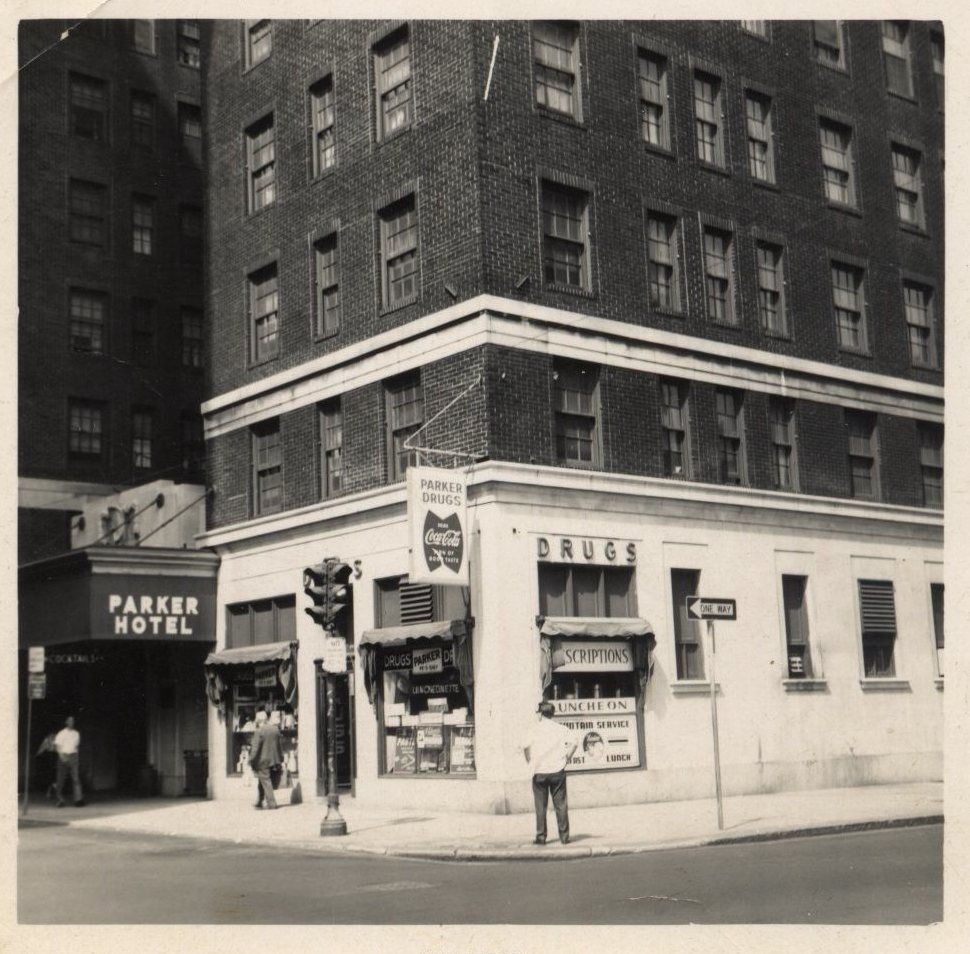 When I stepped inside the hotel my expectations began to falter. The original checkered marble floor and vintage bronze mailbox has been restored, but the lobby was now dominated by a massive, cylindrical, marble reservation desk. There is not another piece of furniture in the space. Seating is only available in a lounge just off of the lobby where an entire wall is covered in rabbit-themed wallpaper designed by Neo-Expressionist painter Hunt Slonem. This would be amusing if the same bunny motif wasn’t plastered all over the hallways, guest rooms, bathrooms–you name it. I asked to see a room and was shown a “king-size with private bath.” The hotel website states that rooms range from 221 to 250 square feet. I don’t know what kind of measuring device they used, but, in the room I was shown, there was no more than three feet of space in which to maneuver between the bed and walls. “It’s a European-style room,” said the manager. Just one problem. Philly isn’t Europe and there are spacious hotel rooms at lower rates a block away.

While the Marriott name and renovations have cleaned up the Parker Hotel dramatically and admirably, I suspect its ghosts continue to wander the halls, chain-smoke in the lobby, and drift into my grandparent’s old drugstore for a Cherry Coke.