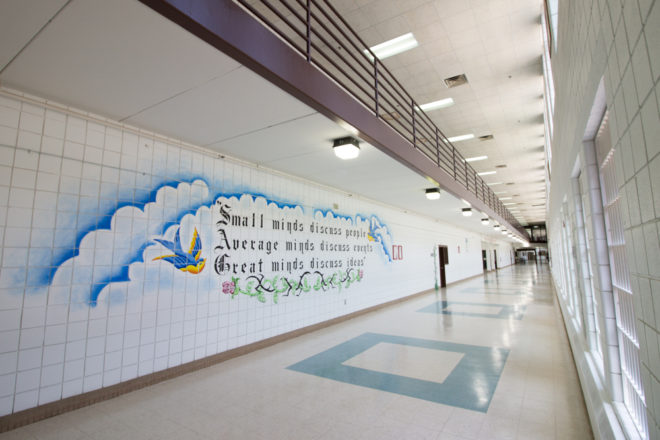 Inside SCI Chester, inmates, local artists, and the staff of Eastern State Penitentiary have been quietly producing “Hidden Lives Illuminated,” an animated film series that tells the personal stories of the incarcerated. The project debuts on August 15. | Photo: Michael Bixler

Perceptions of time—sometimes it seems to move quickly, and sometimes slowly–depend so much upon the circumstances. For the incarcerated facing a long sentence, time can move very slowly indeed. So it could seem like an odd juxtaposition, to bring the hyper-speed craft of animation, sometimes with dozens of frames per second, into a prison setting. But to realize an art project that has been years in the making, the staff at Eastern State Penitentiary (ESP) used animation as a solution to a problem. “It’s rare to be able to bring a camera into a prison, so we chose animation as the medium,” recalled Sean Kelley, ESP’s senior vice president and the project lead for the collection of animated films of Hidden Lives Illuminated that premieres August 15 on the walls of the penitentiary.

Inspired by an art project in Chicago, the aim was to shed light on the unseen lives of inmates in their own voices. A comment ESP staff has often heard was that prisons seem designed not only to keep the incarcerated in, but to keep the rest of humanity out. For the project, teaching artists worked with inmates at the State Correctional Institution (SCI) Chester and the Philadelphia Department of Prisons’ Riverside Correctional Facility (RCI), leading classes in the crafts of animation, drawing and scriptwriting. Each participant would produce a short animated film that would be screened on ESP’s imposing Gothic Revival facade.

The project leaders discovered another advantage to using animation. “It has all the elements of filmmaking: narrative, format, and scenes,” said Kelley. “But you can have scenes that take place on sidewalks, or in hospitals, in living rooms, which wouldn’t be otherwise possible for these filmmakers. So it’s a really appropriate format for an environment like this.”

The downside might have been the steep learning curve to animation techniques. “I was hesitant because I had no art skills,” recalled inmate Marvin S. during a recent visit to SCI Chester. His film “Between Two Courts” recounts his life, transitioning from a college basketball player to his current incarceration. “The drawing was tiring at first. Then, I fell in love with the animation.”

“It was very tedious,” Jerome L., another inmate, said frankly. “There was a lot of drawing, then writing the script, with a lot of editing. There were days when I just wanted to scream and pull my hair out and rip everything apart. But it’s a project I wouldn’t change.”

The participants were selected by the Department of Corrections from a pool of roughly 100 applicants. Under the credo of ‘no experience necessary,’ the teachers began at the beginning. “We started with basic drawing with charcoal,” explained lead teaching artist Erika Tsuchiya-Bergere, a faculty member of Rowan University. “We did a lot of sketching and figure drawing, covering the basic building blocks of art technique. Then we introduced the basics of filmmaking: pre-production, scriptwriting, recording voiceovers, and then to animating.” The processes used included animating hand-drawn images, stop motion animation of found images, and rotoscoping, or drawing over photographs. A voice coach assisted them in recording their narratives. 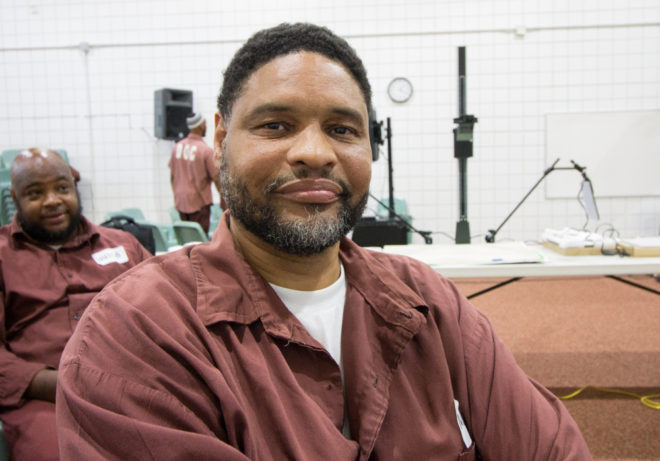 In his animated film, Marvin S. recounts his burgeoning basketball career before he was incarcerated at a young age. | Photo: Michael Bixler

It was a learning experience for the teachers, too. After a brief orientation and time for prep work, the teaching artists dove into the project. “A lot of my projects are community-based, in Camden and North Philadelphia. But this was a culture shock, like traveling to a different country,” recalled Tsuchiya-Bergere. “After a year, I’m still constantly getting used to the environment. Every time I come here [SCI] I’m still adjusting to it.”

For the participants, after learning the filmmaking processes, the next challenge was to honestly present their often difficult stories. What might have seemed an embarrassing experience turned out to be cathartic for most. “People might look at me and the only thing they see is the crime I committed,” said Joe K., “But when I start speaking, they’ll say, wait a minute, there’s more to this person and then maybe you can have a clearer understanding of who I was, and who I am now.” To underscore that change, he titled his film “There He Was, There He Is.”

Kelley thinks he knows why the filmmakers were willing to tell their stories in a frank way. “People in prison want to find a way to make the world a better place, even in small ways,” he said. “A year ago, we came into this prison and said to the entire population, anyone want to learn animation? The project naturally appealed to those who wanted to express remorse, tell stories of redemption, or reflect on the ways we can do better in all aspects of our nation. So there are some real optimists in here.”

The themes in many of the stories reflect familiar consequences of prison: missing their children, lost opportunities, and the day-to-day tedium. Qwasheem R.’s story is a reminder that certain aspects of life can occur no matter where you are: he was diagnosed with cancer while at SCI Chester. “It was a lonely feeling. You’re locked in this cell, then you go out for radiation treatment every day, and you’re alone in the transport van. You go under for surgery, and you don’t have any family or friends around.”

“Every one of these scripts is an extraordinary piece of writing,” said Kelley. “They spent months on this, writing and rewriting and reading them out loud to each other.” The stories are frank and honest, although there were some constraints. “The Department of Corrections sat down and talked with the filmmakers about what’s off limits,” explained Kelley. “For instance, you won’t see violence on the screen. You’ll see a discussion of the consequences of violence. It’s a public art project, so you won’t see a realistic gun or profanity or nudity or someone getting assaulted.”

In addition to SCI Chester, the project was also conducted at a Philadelphia women’s prison, Riverside Correctional Facility (RCF). In addition to gender, the populations at the two institutions differed in their circumstances. As a medium security facility, SCI Chester’s residents are serving generally long sentences in place, while Riverside’s population is more transitory, with inmates serving sentences on weekends, some on work release, and still others awaiting sentencing and a transfer elsewhere.

For RCF, Tsuchiya-Bergere said the solution was to produce one collaborative film. “On a week to week basis, it was hard to predict who would show up,” she explained. “Someone would get released, or be sent to solitary confinement, or transferred. There was a core group of four or five women and then up to ten others who would come and go.”

Kelley sees value in both approaches. “I think the Riverside film is a work of genius, though no one person got to tell their own story from beginning to end and make an individual creative project.”

For ESP, the project is an important facet of their mission. Rather than continue to center its attention exclusively on history, the preservation of their building, and fun public programs like Bastille Day and their annual haunted house fundraiser, Terror Behind the Walls, the nonprofit has narrowed its focus on fostering dialogue about contemporary issues relating to in the criminal justice system.

Screenings of Hidden Lives Illuminated begin on August 15 and runs through September 12. Each week will feature films grouped into one of four themes: The View from Inside, Criminal Justice Today, Family and Community Impact, and Restoration Justice. The screenings run about 40 minutes, with three showings each night, plus guest speakers and activities relating to criminal justice reform. The project will culminate on September 12 with a grand finale showing of all 20 films. The free event will take place rain or shine.

The screenings of the films on the ESP wall will be filmed in turn by Media in Neighborhoods Group (MING), and shared with the filmmakers in Chester and Riverside so they can see what the screenings looked like and the audience reaction. Then, the project will live on in the form of a documentary film by MING about the project, with all of the films embedded in it. ESP will host continuous screenings over the course of a year and also send it out on the film festival circuit.

While it is not certain if there will be a second round of filmmaking of Hidden Lives Illuminated, many of the participants said they are continuing with drawing and narrative writing, and a few plan to find a way to continue with their newfound medium of animation. Through his Instagram account, Joe K. is working on a project he’s calling “Transformational Thinking.” “When I first got incarcerated, I thought about going home and involving myself in the same types of things that landed me where I’m at. Over time, my thinking started transforming. Now I feel, that’s insane, why would I go out there and do the exact same thing and giving more time away? I used myself to do negative things, so now it’s time to start doing some positive things and see where that road leads me.”