A Reconstructionist Synagogue Weaves Itself Into Manayunk’s Industrial Fabric 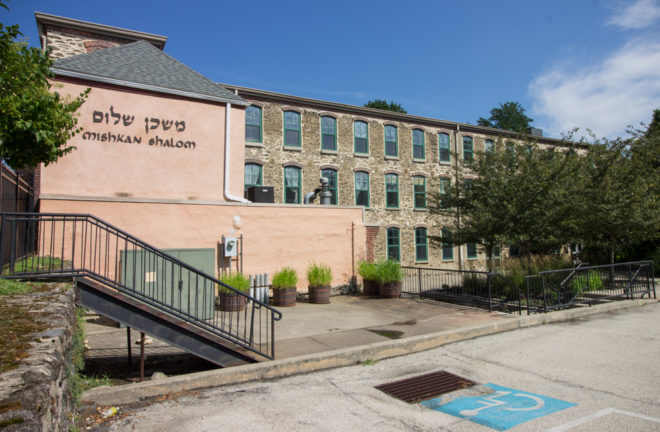 Mishkan Shalom was founded in 1988. The congregation found a permanent home 14 years later inside the former textile mill of A. Flanagan & Bro. in Manayunk. | Photo: Michael Bixler

In 1988, Rabbi Brian Walt was parting ways with his synagogue in Media, Pennsylvania. Rabbi Walt’s criticism of Israel during a Palestinian uprising had put him at odds with his congregation, Beth Israel. Rabbi Walt was leaving, but he was not alone. 30 families came with him and together they founded a new congregation on principles of social activism and interfaith alliance. They named themselves Mishkan Shalom, which means Sanctuary of Peace. For its first 14 years the congregation lacked a permanent residence, meeting everywhere from Quaker schools to Methodist churches, gathering more and more members as they moved from place to place. Finally, in 1998, Mishkan Shalom purchased its permanent home: Freeland Mills, a 137-year-old textile mill built by A. Flanagan & Bro. in Manayunk. The mill’s 30,000 square foot campus had been vacant for over a decade, but soon sprung back to life when the congregation moved in. However, converting a factory into a synagogue was neither quick nor cheap. It took almost six years and $3M before the mill could host worship services.

In 1882, Irish-born Andrew and John Flanagan built their textile mill on Freeland Avenue. Described in a 1905 survey as an “enterprising and prosperous firm,” A. Flanagan & Bro. filled this little enclave of Manayunk with the lively chatter of textile-making. The mill’s feltworks process, although intricate, was not delicate. Its large boiler room hissed steam into a 150-horsepower engine which, in turn, powered huge carding and spinning machines. Anywhere between 40 to 80 employees oversaw the mill as it cleaned, straightened, and spun raw wool into massive bales of carpet padding. 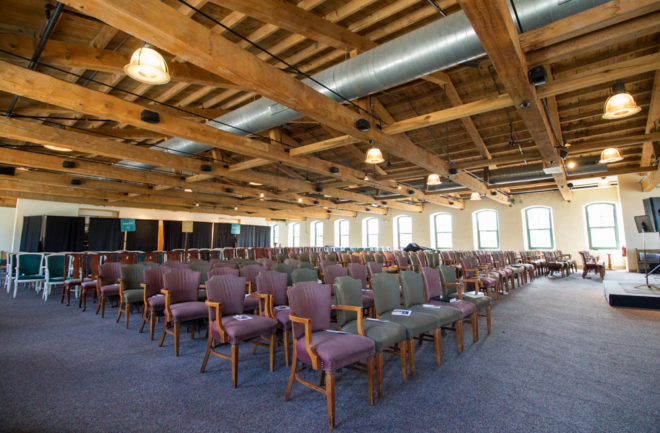 The sanctuary of the synagogue pays tribute to the old mill with exposed beams and duct work. Mishkan Shalom shares the worship space with City Light, a Christian church with congregations in Manayunk and Center City. On Saturdays when Shabbat services are held the chairs are placed facing the opposite side of the room. On Sundays during Christian services the chairs face the direction pictured. | Photo: Michael Bixler

Over 100 years later the congregation of Mishkan Shalom moved in. Some of the building’s needs were immediately clear. The structures, although stable, had been built with machinery, not people, in mind. Each floor was vast and empty, but for cloth-covered wooden support beams. These garbed columns were a source of anxiety for Bob Kauffman, a Mishkan Shalom member and professional contractor. The padding may have protected the wood from damage, but was this old cloth safe to breathe around? “We went, ‘What’s in this stuff? Who knows if it’s toxic?,’” recalled Kauffman. But that initial panic quickly subsided. The cloth was simply wool and hair, likely rejected or surplus material. If you look at the synagogue’s columns today, you can still find the bent and flattened nails that held the covering in place.

Other changes in construction involved the property’s aesthetic. The original boiler room was one of the first things to go. “Our founding rabbi looked at it and said, ‘No way. You can’t have something that looks like Auschwitz… like a crematory,” said Kauffman. With the boiler room demolished, site workers turned the vacant hillside into an amphitheater, placing weighty boulders in seated rows along the sloping grass. All that remains of the original structure is its overgrown brick-and-tin smokestack. 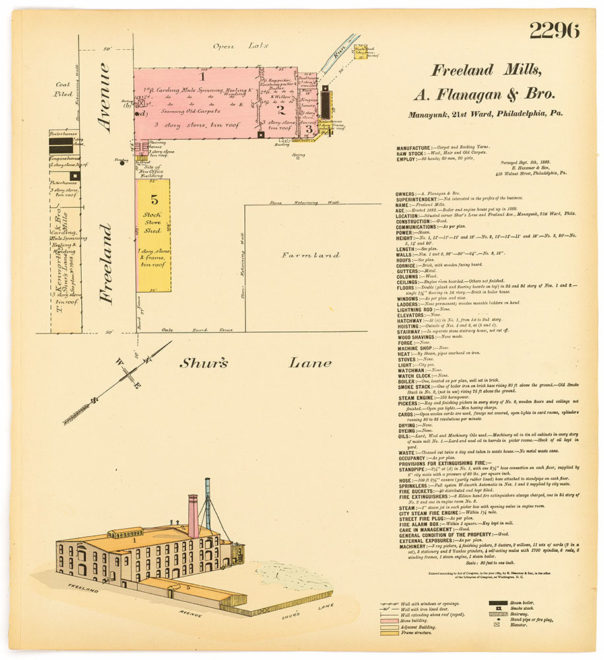 Irish-born brothers Andrew and John Flanagan opened Freeland Mills in 1882. It remained in operation until the 1970s. | Image courtesy of Print and Picture Collection, Free Library of Philadelphia

Overall, the building remains largely unchanged. The wooden floors slope with all the sturdy quirks of old timber. The immense, original windows are nearly impossible to open. And wedged between the interior stonework, thin pieces of ledger board crop out from the walls. They once held posted factory announcements. Now they support yarn lines of decorative paper cranes. Every square inch of the synagogue mingles in this interplay of preservation and innovation, of the mill’s original function and its current lifeblood. “This is home,” said Kauffman. “It’s an active place.”

Mishkan Shalom staff member Gari Julius Weilbacher attributes the congregation’s vitality and growth to its attractive values. Because the congregation is such a progressive community, Weilbacher said, people came from all over when the congregation was first established. And they still do. Much of that activity stems from the ways the congregation acts on its larger values, like social reform. The second floor of the old mill is occupied by C.B. Community School, an education center for students involved in child welfare and juvenile justice systems. Mishkan Shalom’s interfaith commitments, too, remain steadfast. On Saturday mornings, the synagogue’s sanctuary is used for Shabbat services. On Sundays, seating is reconfigured and used by City Light, a Christian church with congregations in both Manayunk and Center City.

What pushed a previously nomadic congregation to a building with such a strong sense of social history? To Rabbi Shawn Zevit, a building is only as important as the connections to its people and environment. “The place that we are in is a living connection to the divine energy and the planet and not just happenstance.”  That connective belief plays into Rabbi Zevit’s passion for community involvement. It also connects him to an older sense of place. Older than A. Flanagan & Bro., older than textiles.

Heavy rains push a powerful current of water beneath the synagogue. Proper allocation of this moisture is the building’s largest structural concern—in other words, Kauffman’s biggest headache.  It is possible the mill workers never heard it over their machines, but in the new quiet of what is now the synagogue’s social hall, the stream resounds. Now that Rabbi Zevit knows it’s not the sound of a leaking pipe, an initial concern, he goes out of his way to listen for the water. “It’s so soothing to hear. That life is still underground,” he said. “The building itself is part of the earth from which we come.” 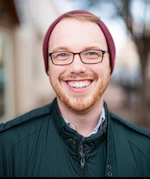 Scotty Meiser Scotty Meiser is a pastoral resident at Redemption Church of Bristol. He graduated Poet Laureate with a BA in English from Cairn University, where he wrote his senior thesis on narrative structure in film. His poems, musings, and original MS Paint drawings can be found at ascottmeiser.com.