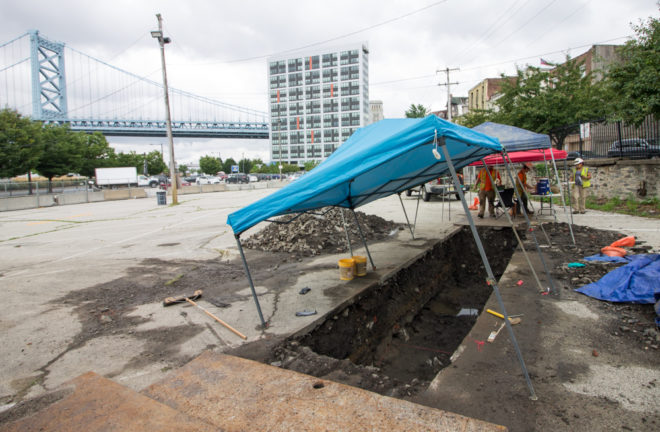 This parking lot at Columbus Boulevard and Callowhill Street covers the former site of West Shipyard, a long-lost piece of 17th century maritime history along the Delaware River waterfront. A New York developer has plans to build on lot once an archeological study is conducted. | Photo: Michael Bixler

This week, archaeologists began digging beneath a parking lot at Vine Street and Columbus Boulevard in search of information about Philadelphia’s early maritime history. The asphalt lot covers the site of the former West Shipyard, founded in 1676 when the Delaware River waterfront was located along Water Street. On Friday, July 26 the public will have an opportunity to tour the site and see the work being done. Archaeologists will have artifacts on hand, give some background on the history of the site, and explain what they have found so far.

“Delaware Avenue was built through here in 1850, at which time the piers moved to the other side of that street and this became an inland site,” explained Douglas Mooney, principal investigator with AECOM, the engineering firm leading the archaeological due diligence for New York-based developer Durst Organization. The real estate firm plans to build a residential tower on the site. “In the late 17th, 18th, and early 19th century this was the center of shipbuilding and commerce. Also, in the early 19th century, lumber and coal yards were here.”

The site has been called the last best-preserved part of the city’s original waterfront. “This site has the potential to tell us a huge amount of information about how Philadelphia’s port grew over time,” said Mooney. “It’s information that’s unavailable from any other part of the waterfront because the waterfront from that time is gone everywhere else. When I-95 was built, it destroyed any trace of most of the original waterfront, but it missed this spot.” 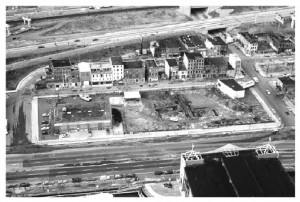 An overhead shot of the West Shipyard site in 1987. | Photo: from The Buried Past: An Archaeological History of Philadelphia

The current work has been informed by two earlier excavations, in 1987 and 2012, that revealed activity from the late 16oos through the 1800s. “We know we have evidence of wharves and piers in parts of the site,” Mooney said. “We know the range of things that are going to be here, but you never know exactly what’s going to be preserved and what is not.” Despite the previous projects, large areas of the site have never been looked at.

One of the first spots archaeologists opened this week was opposite the Wood Street steps, where they hope to find some structures that might relate to Wood Street, which formerly ran through the site. They discovered part of a wall on what would have been the south side of the street. Mooney said it’s likely a 19th century structure and they will consult the historical record to try to identify it. “We know of a hand-drawn map from 1808 that shows the area along Vine Street. It lists things like ‘brick house’ and ‘frame store,’ so there’s evidence that people lived on this site.”

“These 19th century buildings were often built on top of older structures, so we’re going to see if we can get down below the basement level to see if there’s any evidence of the earlier structures from the waterfront that might be preserved beneath this building,” Mooney explained.

As of Tuesday, the initial digging with a back hoe uncovered mostly fill dirt that appeared to have been brought there from elsewhere. In it they found remains of shoes, including a child’s shoe, a smoking pipe, and various pottery shards, including samples of the slip decorated redware that Philadelphia was known for in the 18th and 19th centuries. After the machines remove the layers of fill, the archaeologists will work by hand in the trenches to handle the materials that are originally from the site in a more controlled manner to avoid damaging anything. 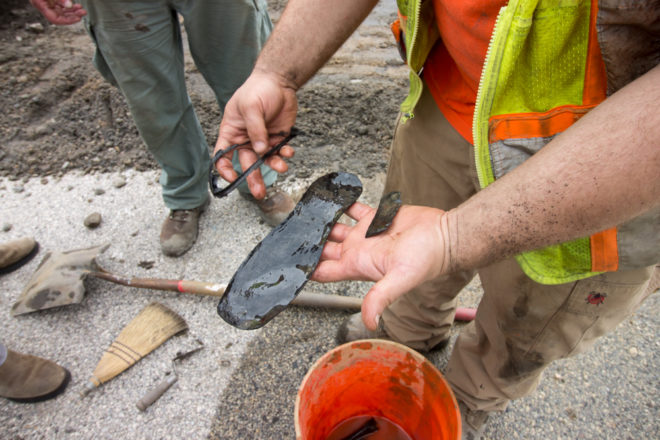 Archaeologist with AECOM, the engineering firm leading the dig, has already unearthed artifacts like pieces of a shoe (pictured here), redware pottery, and a pipe among other items. | Photo: Michael Bixler

As to what becomes of the artifacts they encounter, archaeologists follow a standard set of procedures. The first choice is to preserve all materials in place. “But there are certainly things that will have to be disturbed, just as a necessity of construction,” Mooney noted. “In that case, the standard method is to fully document what was in that location so there is a permanent record. We take pictures, and drawings and video, or even create 3-D models. We preserve the information that’s present. “

In addition to the historical information to be gleaned from the excavation, the project will also help guide the construction plans for the site. Archaeologists will be on hand throughout, noted Durst’s project manager Jeffrey Aser. “Once we have a design and we know which parts of the site are going to be disturbed, a full investigation of that area will be conducted. And during the construction, Doug’s team will be on site, so if something else turns up, they can monitor it, investigate it, and document it.”

Another public viewing will take place in August and then a public meeting in October to present their findings and a data recovery plan, which will describe the archaeological work they’ll do during the construction.

A public tour of the West Shipyard archaeological site will be held on Friday, July 26 from 12PM to 1PM at 300 North Christopher Columbus Boulevard. The event is free, but registration is requested. RSVP for the tour HERE.