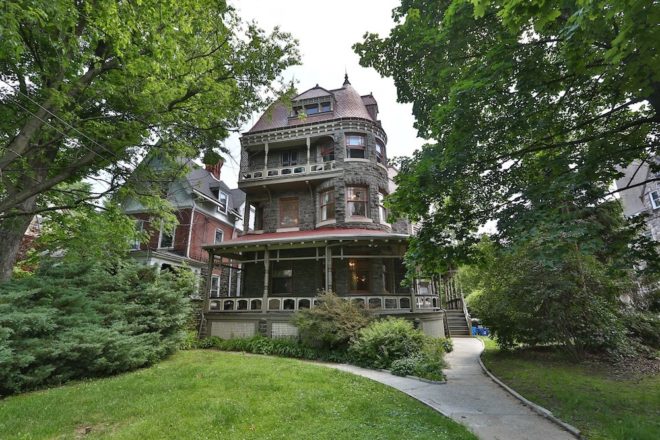 This mansion at 264 West Walnut Lane was converted into apartments in the 1950s. Upzoning neighborhoods to allow historic properties like this one to be converted into multi-unit dwellings could both provide affordable housing in desirable neighborhoods and ease the historic preservation crisis in Philadelphia. | Image courtesy of Elfant Wissahickon Realtors

Historic homes in the Tulpehocken Station Historic District regularly grab real estate headlines for their stunning designs, palatial sizes, and correspondingly steep prices. The stone building perched on a quarter of an acre on West Walnut Lane is a little bit different. Yes, the Late Victorian-era house was built in 1895 and features elaborate windows, a wraparound porch, and a castle-like roofline. But this mansion was transformed long ago into a six-unit multifamily residence.

Converting an historic mansion into apartments is nothing new. Aaron Wunsch, architectural historian and associate professor at the University of Pennsylvania’s School of Design, explained that the conversion “simply codifies the oldest de facto preservation strategy in the urban toolkit: cutting up large buildings into smaller units, ensuring their continued utility by providing more affordable spaces.” He pointed to Society Hill row houses as earlier examples of building subdivision. Before being restored, many had ground floor retail topped by multiple apartments. “That ability to adapt is what kept them standing,” said Wunsch.

Christopher Plant, a real estate agent with Elfant Wissahickon, said 264 West Walnut Lane was converted in the 1950s. Plant represents the home’s current owner Carol Schramek, who has owned the property for 32 years. “Her husband passed away 10 years ago. They once owned 31 unique properties together, so she wants to pick the pace up in moving some of the inventory,” Plant explained.

The three story house was designed as a single family residence. It was converted into a six-unit property composed of three one-bedroom apartments, two two-bedroom apartments, and one studio apartment. A rusticated stone facade, detailed window treatments, and delicate Gingerbread ornamentation are character-defining features of the house. Although built close to neighboring residences, the property retains elements of its historically intended country-like setting through street setbacks and dense foliage.

264 West Walnut Lane was designed by G. W. & W. D. Hewitt, the firm of brothers George W. Hewitt and William D. Hewitt. George was the former partner of famed Philadelphia architect Frank Furness. The Hewitts were notable for their Northwest Philadelphia residences and projects like the Wissahickon Inn and Philadelphia Bourse–successful adaptive use projects now listed on the National Register of Historic Places. 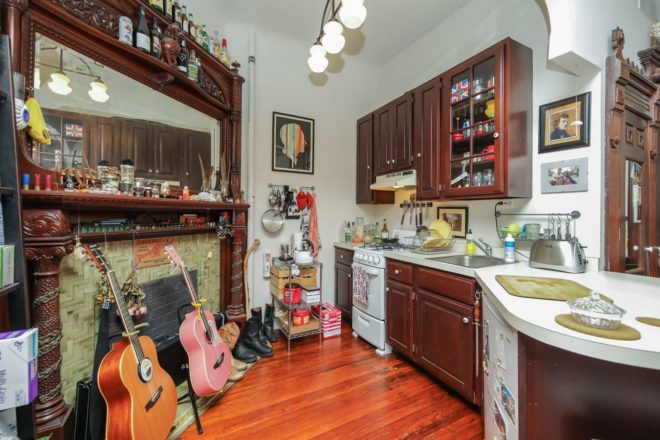 Much of the original wood ornamentation was retained in one of the historic mansion’s converted apartment units. | Image courtesy of Elfant Wissahickon Realtors

The Tulpehocken Station Historic District is full of Hewitt brothers homes, which are clustered on Tulpehocken Street, Walnut Lane, and Wayne Avenue. The complete district includes 155 significant or contributing buildings constructed during the mid-to-late 19th century and the early 20th century.

Germantown developed as a streetcar suburb in the mid-19th century. Architects and the wealthy families who commissioned their designs enthusiastically embraced landscape architect Andrew Jackson Downing’s notion of picturesque suburban design as an antidote for the strains of modern urban life. In Germantown, you could escape to the country while enjoying the comforts of and proximity to a thriving city. The historic district is characterized by large Queen Anne, Gothic, Italianate, and Rustic single family homes set back far from the street.

The historic district was added to the National Register of Historic Places in 1985, and fewer than 10% of the buildings it includes are non-contributing. This makes converting some houses into multifamily residences (ideally those which original interiors are not still intact) a logical path towards adding housing in the neighborhood.

Restrictive zoning means that most houses in the historic district remain single family residences. Yet, 264 West Walnut Lane’s conversion still provides a blueprint for those seeking to densify cities with sacrificing historic housing. Six homes on .27 acres is no skyscraper, but it represents a six-fold increase for the neighborhood.

Promoting moderately dense development through zoning may help reverse outdated national housing policies shaped by discrimination and definitely provides options for those who want to live in cities if there is an alternative to the downtown high-rise. “Upzoning in historic districts is a good thing and overdue,” said Wunsch. He noted that density does not exist independent of other urban factors and should be married with, not pitted against, historic preservation. 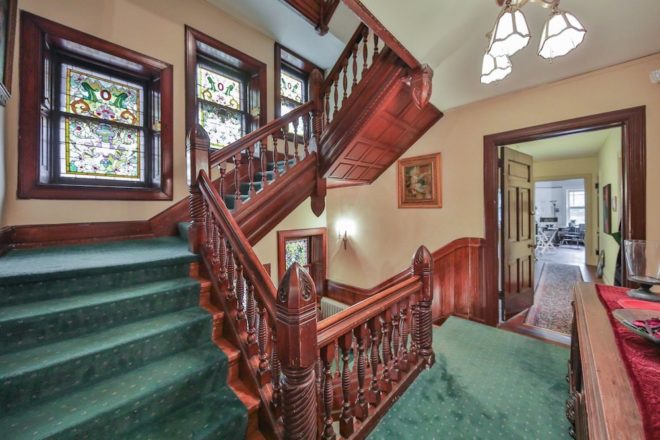 “We think there is room for density in historic districts,” said Patrick Grossi, director of advocacy for the Preservation Alliance of Greater Philadelphia. Along with upzoning already protected neighborhoods, he pointed to a bill recently introduced before City Council to allow accessory dwelling units in buildings listed on the Philadelphia Register of Historic Places as steps in the direction of incentivizing preservation along with density and affordability.

These strategies also take advantage of the embodied energy of historic buildings. It is obviously more energy efficient to house six families in a mansion than one, but even the act of retaining the building itself means preserving both the energy required for demolition and the resources and energy used in new construction.

There are many other factors that must be considered when upzoning, such as the ability to provide adequate city services to those who are attracted to newly created housing. Planning for many needs simultaneously–equity, transit options, sustainability, adequate services, historic preservation, parking–is crucial, and may help ease existing residents’ concerns about increasing low-density neighborhoods’ populations.

Changing zoning codes to allow or incentivize sensitive development in historic districts could rapidly provide significantly more housing for in-demand neighborhoods in Philadelphia. It could even aid nearby cities like Washington, DC that are battling acute affordability crises. It also makes historically exclusive neighborhoods more accessible to those they once eschewed. Marrying historic preservation with inclusive zoning can reap the benefits of preservation while righting history’s wrongs.

Every neighborhood, historic or otherwise, does not need to dramatically upzoned to add a considerable amount of housing stock to the city. Creating a limited pilot program in a downtown-adjacent historic district that has large single family houses and high residential demand would be a good first step in sustainably adding more housing to the places that need it most, while maintaining the character that drew residents there in the first place.