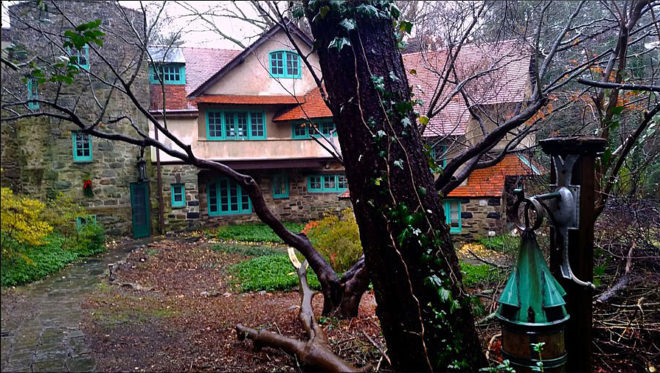 “You couldn’t open a new museum at a worse time,” says Ryan Berley, curator of the new Rose Valley Museum at Thunderbird Lodge, recalling how he was warned to steer clear by an unnamed skeptic. Berley concedes that there are museums struggling and closing, both locally and nationally, while coping with economic volatility and the sea change of digitally distracted museum visitors seeking immediate gratification.

A Shangri-la in the woods of Rose Valley, Pennsylvania, Thunderbird Lodge was a lesson in adaptive reuse by Philadelphia architect William Lightfoot Price, a practitioner of the Arts & Crafts architectural style. In 1904, he created the home and studio of well-known artists Alice Stephens, student of Thomas Eakins, and Charles Stephens, professor of painting at the Pennsylvania Academy of Fine Arts and Native American ethnologist, expanding upon an 18th century stone barn.

Today, that same former barn is the new Rose Valley Museum at Thunderbird Lodge, a building listed on the National Register of Historic Places that was retrieved from virtual abandonment behind fenced-in, dense underbrush just off of the main thoroughfare in Rose Valley, Pennsylvania. Vacated in 2014, the venerable lodge was gifted to the Rose Valley Centennial Foundation, a non-profit conservancy that recognized its untapped potential as an Arts & Crafts museum.

Despite the initial rebuff, museum curator Berley believes that the current state of affairs represents precisely an Arts & Crafts moment. In collaboration with colleagues Tim Plummer, mayor of Rose Valley Borough and president of the Rose Valley Centennial Foundation, and Morris Potter, president of the Rose Valley Museum and Historical Society and maternal granddaughter of Walter Price, they captured lightning in a bottle. The Foundation selected a couple of live-in caretakers and began investing in restoration efforts to waterproof the building that was, otherwise, structurally sound. In plan, its wings pivot around a handcrafted octagonal stair tower like an exotic butterfly in the woods.

Price converted an old stone barn from the 1790s into an artist’s lodge. | Images courtesy of the Athenaeum of Philadelphia

The museum opened in October 2017, having raised some $600, 000 towards a $1 million target for full, historic preservation of the lodge. $100,000 came from Pennsylvania Historical and Museum Commission Keystone Historical Preservation Grant program. The fledgling museum, launched with 50-60 paid memberships, has already grown to 250 paying members. An all volunteer staff pitched in as the brush was being cleared away for a visitor parking lot. Landscape and arbor consultants have since made headway restoring the splendor of the grounds. Exceptional handmade furniture, ironworks, tools, and other items generated in period workshops conceived by Price now comprise the museum’s growing holdings.

“We need to be a living museum, engaging people with their hands, close to nature, building a community of shared values,” Berley says, echoing the precepts of the movement itself. He grew up in Media, Pennsylvania steeped in the mystique of Brandywine Valley and the Rose Valley community. His own parents had their wedding reception in the Old Mill where the Rose Valley wood furniture shops were originally located.

Berley, co-owner of Franklin Fountain ice cream parlor and Shane’s Confectionery in Philadelphia, studied history and entrepreneurship in college. For Thunderbird Lodge, he envisions a kind of rambling historic site akin to Williamsburg, Virginia where craftspeople can be seen at work and visitors experience that life in hands-on fashion. Price’s array of planned and repurposed buildings will suddenly spring to life, reanimating the original Arts & Crafts spirit.

In his book, William L. Price, Arts & Crafts to Modern Design, architectural historian George E. Thomas presciently mused, “Perhaps one day the borough will establish a museum…” Come 2019, Berley is almost taken aback by their initial success, seeing how a little historical society must now rise to the occasion with a business model, an accession policy for museum furniture, ceramics and ironwork, possible augmented reality tours utilizing glass plate Rose Valley images and a database, while addressing myriad details constituting a bona fide public museum. Even at this early phase, however, Berley evinces a strong sense of momentum and fulfillment. A dream has been realized. 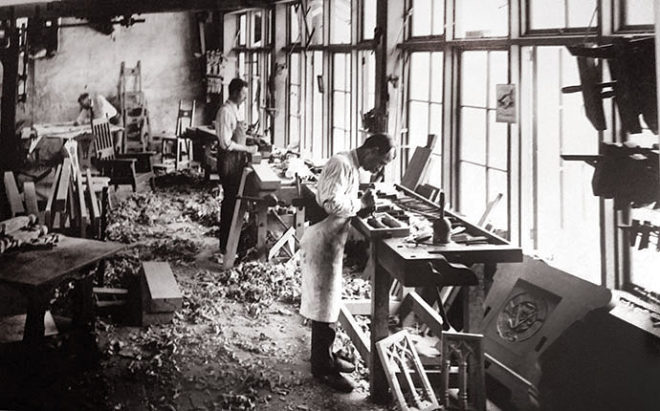 Thunderbird Lodge evolved as part of a unique crafts community intended as a living expression of the Arts & Crafts philosophy and spirit. In 1901, Price and wealthy businessmen purchased some 80 acres of land for new housing in Rose Valley.

The lodge’s angled floor plan bends to bucolic landscape contours and tracks the arc of the sun as stained cypress and plaster interiors glow with evanescent moods, mystery, and delight. It was built with sand from Ridley Creek, local fieldstone from farmers, stone from the Lieper stone quarry in Wallingford, and trimmed with famed, local Mercer tiles. For Price, this was no accident. He was following English Arts & Crafts Movement principles, emphasizing local materials and labor, all of which lent a certain unity and integrity to his constructions.

Rose Valley, when Price landed, was an abandoned textile mill site. Empty hulks of industrial brick were part of a blank canvas upon which Price sketched out a new Arts & Crafts building complex, including craft workshops and a theater that Price himself gamely performed in, which is still in operation today as the Hedgerow Theater. The Arts and Crafts movement, beginning around 1862 in England, was an attempt to push back the tide of mechanization and mass production stemming from the Industrial Revolution. Price had traveled to England and absorbed lessons from rural villages of pre-industrial cottages he saw there. He merged prevailing humanistic philosophies of William Morris and John Ruskin with his Quaker values, abundant architectural talents, charisma, and idealism.

Upon his return he found that well-heeled suburban living left him dissatisfied and restless. Like a pied piper, he summarily packed up his own young family, the extended Price clan, and a retinue of friends, staking out territory for a bold architectural experiment. Price, both a visionary and successfully pragmatic architect, thus began his revolutionary attempt to change the course of regional history. 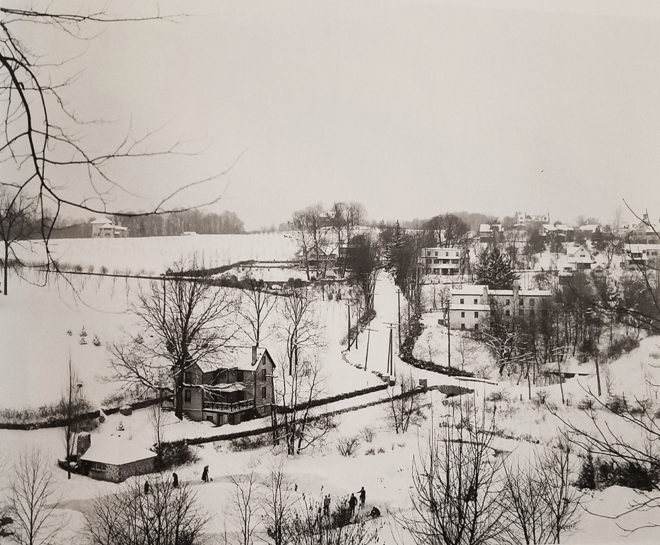 Rose Valley and Thunderbird Lodge in the early 1900’s. In the foreground, snow shovelers clear the ice pond for skating. | Image courtesy of the Athenaeum of Philadelphia

“As human beings, we tend to be deterministic. We look to the past to see how suburbanization and industrialization might take place. There is evidence it could have taken a different path,” says Bruce Laverty, curator of architecture at the Athenaeum of Philadelphia. The Athenaeum houses an extensive paper, glass plate negative, and digital archive of Price’s work and that of his successor firms.

George Howe, late architect of Philadelphia’s PSFS building, once proclaimed Louis Sullivan, Frank Lloyd Wright, and William Price in the same breath as a triumvirate of great American architects. As this 21st century museum incarnation of the Thunderbird Lodge draws fresh attention to Price’s less-heralded legacy, we’ve only scratched the surface of an archaeological treasure in the rolling green terrain of Rose Valley. Where else, in one single location, can you trace the incandescent, overlapping trajectories of Will Price, Frank Furness, Thomas Eakins, Alice and Charles Stephens, the Olmstead family, N. C. Wyeth, C. R. Ashbee, Upton Sinclair, Wharton Esherick, Henry Chapman Mercer, Jane Addams, and Martin Luther King? For the insatiably curious, the Rose Valley Museum at Thunderbird Lodge stands at a nexus of American artistic creativity, traditional craftsmanship, and social activism. The museum inspires contemplation of something both timeless and timely–a humane society founded on community, the arts, and the virtues of enlightened civic engagement.

Rose Valley’s utopian, self-sustaining artisan community eventually collapsed in financial disarray before Price died in 1916. Still, Price himself had smartly managed a parallel design practice, generating an impressive series of railroad stations and Atlantic City hotels that anticipated Art Deco and modern concrete construction. “Price was ahead of his time and, in some ways, behind,” says Laverty. Yet, he emphatically respects Price’s idealistic and, ultimately, quixotic foray into the Arts & Crafts life. “He lived it.”