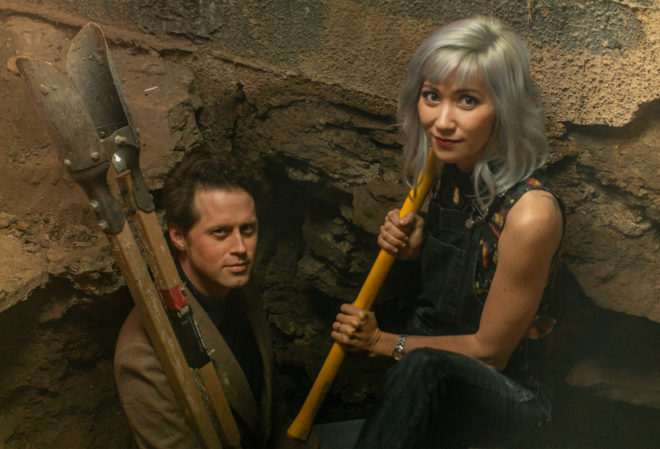 Matt and Melissa Dunphy caught the amateur archeologist bug when they began digging up an old privy on their property on Callowhill Street. The couple now has a popular podcast dedicated to their hobby. | Photo: Mike VanHelder

When most people think of Philadelphia history, their thoughts naturally go to the Independence Hall, the Betsy Ross House, and the Liberty Bell, but much more history lurks underneath the city. In some cases, the only requirements to unearth it are a shovel, a sifter, and a willingness to dig.

Matt and Melissa Dunphy became accidental amateur archaeologists when they discovered a privy pit within the construction site of the building they bought at 103 Callowhill Street. A privy is an 18th century toilet in which people not only relieved themselves, but, because there was no garbage collection at the time, disposed of trash like broken plates and bottles.

When the couple bought what was most recently Grasso’s Magic Theater in 2014, they wanted to renovate it for a multi-disciplinary theater for productions and educational workshops. They envisioned having the theater space on what would be the first floor, extending the height of the building to incorporate a small Airbnb unit over the lobby, and using the third floor for an apartment of their own. The project would eventually be named The Hannah Callowhill Stage.

When the Dunphys bought the building it was in serious disrepair. It had no running water, limited electricity, and the roof was rife with holes. “We knew from the beginning that it was going to be this gut job,” Melissa said.

Melissa is a composer, teacher, and multi-instrumentalist, and Matt works as a solutions engineer for an ecommerce firm. Although savvy in the basics of home renovation, the couple hired a construction company to rehabilitate the building properly. While they were away at the National Puppetry Conference in June 2016, they came back to holes in the foundation that the team had dug in order to insert steel beams. The couple was still living in their house in Downingtown at the time, but Melissa habitually hung around the construction site. One day Melissa found the bottom half of a wine bottle in one of the dirt piles and promptly sent a photo to Matt. “It was super heavy, and it had what’s called a pontil scar on the bottom showing that it was hand-blown,” Matt said. “An initial Googling informed me that because it’s hand-blown, it is pre-Civil War. We had no idea how old the building was.” 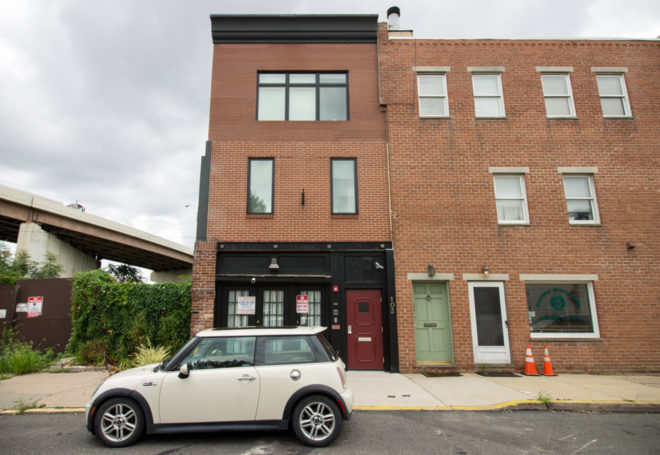 103 Callowhill Street was built in the mid-18th century. It was last used by Grasso’s Magic Theater. | Photo: Michael Bixler

When the couple returned to the site and looked down one of the holes, Matt realized that they had a privy on their hands. Initially reluctant to unearth the bits and pieces of artifacts they saw in the hole,  the Dunphys returned to the site with tools, including a homemade sifter. As they began pulling out pottery and glass shards, the more inspired they were to continue exploring. “We thought it was pieces of garbage, and then we started getting most of a plate or a lot of a wine bottle,” Matt said. “And when you know that there’s more of it there, we thought, ‘We should maybe go back.’” The couple began digging for a third time and excavated buckets of ceramic and glass pieces, which Melissa worked arduously to clean and assemble.

Relatively early on in their privy-digging pursuits, the Dunphys found a pottery shard with the word “navigation” painted on it. They were particularly intrigued because it was a sign that the piece dated back to the 1700s, potentially before the American Revolution. The couple reached out to local archaeologists to help them navigate the objects they were finding. However, none were particularly interested, including specialists at the Penn Museum, which is more focused on ancient archaeology. “We took an archaeological tour of Philadelphia and they brought up a point that modern archaeology is sort of a recent thing–caring about stuff that’s only 150, 200 years old,” said Matt.

Interest in modern archaeology is experiencing more of a revival than a recent development, according to Scott Stephenson, CEO of the Museum of the American Revolution. “If you go back to the ‘60s and ‘70s there was quite a robust historic archaeology program going in Philadelphia,” Stephenson said. “There actually was an era in which there was real public consciousness of the things that come out of the ground.” The museum ran a program about the archaeology of their own site, in which they excavated hard paste pottery from privies of their own.

The reason for a peak in interest in the historic archaeology of Philadelphia is likely due in part to the local community projects and ad campaigns surrounding the 1976 Bicentennial. “My hope is that will happen again now, that there’ll be a reinvestment in getting people engaged and excited in the relevance of the American Revolution,” said Stephenson. “We’re certainly not waiting until the 250th anniversary to try to engage people in seeing that this is an ongoing story that’s full of human drama.”

In unearthing all of these ceramic and glass pieces, the Dunphys discovered a whole culture of privy diggers in the Pennsylvania region. One of Melissa’s acquaintances put them in touch with a local privy digger named George (profiled by Hidden City in 2013) who assisted the couple with their dig. Because the “rules” of privy-digging are such that everyone who digs gets to divide up the findings, George abstained from digging and instead guided Melissa as she continued to unearth objects. It was then that she began finding some fascinating pottery, including a small, three-legged pot called a pipkin. Pipkins range in size and shape, and its three legs allow it to be placed on the coals of a hearth to keep its contents warm. 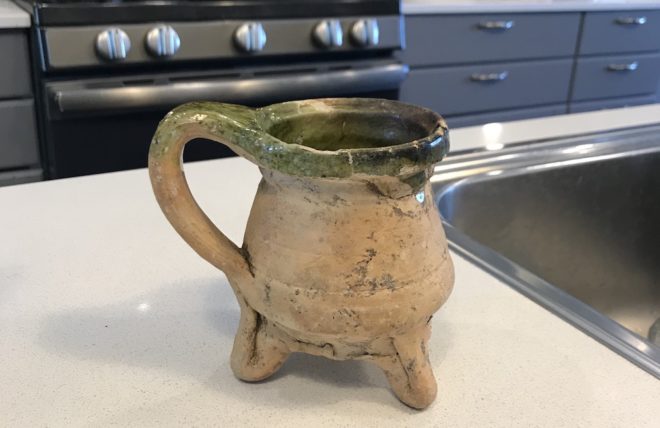 One of the more unusual finds during the Dunphys’ digs was the discovery of an intact pipkin, once used to warm liquid over the coals of a hearth. | Photo: Michele Zipkin

The pipkin holds lots of value in privy-digging culture. By attending Dish Camp, a professional archaeology conference, Melissa and Matt discovered that it’s also an object of interest in academic archaeology circles, partly because it appeared to be comprised of a mix of different pottery styles–a Dutch style dating back to the 15th century and a Borderware style, which came from 18th century Surrey. “It caused a commotion at Dish Camp,” Melissa said about the pipkin. “I pulled it out of my bag and suddenly there were four archaeologists flocking to me. Everybody’s very curious about it.” The Dunphys explained that, based on the color of the clay, the pipkin is most likely not an American vessel because most 18th and 19th century American pottery was made with red clay, known as Redware.

In their privy-related research, the couple also met local privy diggers Michael and Tom who periodically invite them on digs. They told the Dunphys stories of fights breaking out among some privy diggers over particularly valuable objects. “You have folks who are essentially a couple steps above being homeless, so it’s a lot more meaningful to them to get the money for a good bottle,” Matt explained. But some privy-diggers are able to make a good living from the artifacts they find. A man in Baltimore started selling his privy-excavated objects as antiques and has gained respect in the world of academic archaeology. “For us, we were marginally interested in 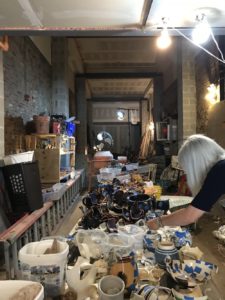 Philadelphia history, but felt no real investment in it until all of this happened,” said Melissa. “And then suddenly it’s like, ‘This is so real. This history is under all of our feet, it’s everywhere.’”

Melissa and Matt most recently dug up another large haul of pottery from a privy in the lot behind their building, including ceramic dishes and wine bottles. They also found what is called Colonoware made by Black potters, some of whom were enslaved, some free, for African American slaves to use. However, there has been discussion in the professional archaeology world as to whether these kinds of vessels were made by African Americans or Native Americans.

The Hannah Callowhill Stage has been a years-long construction project, but the Dunphys hope to have a semi-functional theater by the fall of 2020, provided they have enough funds to continue with construction at a steady pace. The couple plans to decorate the interior of the building in a neo-Georgian style similar to the era of the pottery that had been discarded beneath their building some 250 years ago. They also expressed interest in having plaster walls, a manufacturing technique that is no longer widely used. “It’s kind of an extension of our whole thing which is, let’s actually take pride in and reclaim the heritage of the past,” Melissa said. “Let’s explore traditional techniques.”

The Dunphys plan to use the approximately 70-seat theater as a multi-faceted performance space to include theatrical, musical, dance, circus arts, puppetry, and self-produced performances. In the long term, they plan to host a Shakespeare-centered acting school and a composition school primarily geared toward middle school-aged girls and gender minorities.

Matt and Melissa have created a podcast called The Boghouse, in which they recount, in a richly informative and, at times, highly amusing way, their story of buying the building at 103 Callowhill Street, discovering the privy, and reconnecting with American history through objects made and used when America was in its infancy. 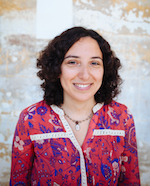 Michele Zipkin Michele Zipkin is a freelance journalist and podcast editor in Philadelphia. In addition to Hidden City, some of her writing can be found in Philadelphia Gay News, Stacker, and PhillyVoice. As a Philly native, she has developed a love of the city's built environment, particularly music venues, from her past journalistic life reviewing concerts of the alternative, rock, and folk genres. She has a curiosity about old objects and old buildings.