History May Lie Deeper Under A Church Rectory In South Philly 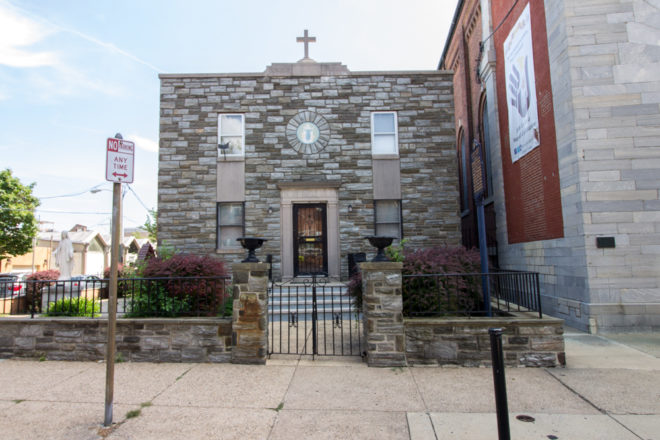 The rectory of St. Mary Magdalen de Pazzi at 7th and Montrose Streets may have been built on top of a 100-year-old African American burial site. It was last used by the Mario Lanza Institute and Museum. A developer plans to demolish the rectory and build seven homes with garages. | Photo: Michael Bixler

In a city like Philadelphia, saturated with churches from the 19th century and earlier, there is bound to be a lot of “firsts.” As the demographics of the city’s neighborhoods change, sometimes those designations help save a religious building whose congregation is diminished or gone, but not always.

Sometimes auxiliary buildings will be sold to free up resources to preserve the main church building. That is what’s been happening with first Italian national parish in the United States, St. Mary Magdalen de Pazzi at 7th and Montrose Streets in Bella Vista.

A national parish is one that serves a particular community, rather than a geographic area. In the U.S., they arose during various immigrant waves, starting with the creation of Holy Trinity German National Parish in Society Hill in 1784. At one time, the Archdiocese of Philadelphia had over four dozen such parishes, serving Italian, Polish, and several Eastern European immigrant groups. Today, nearly a dozen remain, including St. Rocco Parish in Avondale, in southern Chester County, which was founded in 2010 to serve the area’s growing Mexican population.

St. Mary Magdalen de Pazzi was a 16th century Carmelite nun from Florence. The church bearing her name was founded in 1852 by St. John Neumann, then bishop of Philadelphia, to serve the city’s Italian immigrant community. The current church building was erected 39 years later. It was closed as an official parish in 2000 and is now used as a worship site once a week for St. Paul, a nearby church at 10th and Christian Streets.  The Pennsylvania Historical and Museum Commission dedicated a commemorative plaque for St. Mary’s in 1994.

As with other attempts at church preservation in the face of dwindling congregations, the Archdiocese of Philadelphia wants to sell the former rectory of St. Mary’s to a developer. There’s been a precedent here, when its former convent building at 730 Montrose Street on the east side of the church was converted to five condos in 2010. There are, however, a couple of differences in the two buildings’ situations.

Records from around the turn of the last century refer to a cemetery on the site of the rectory building. In its Historic Burial Places Map and Database, the Philadelphia Archaeology Forum (PAF) indicates a burial ground there, citing the Atlas of the City of Philadelphia, published in 1895 by civil engineers George and Walter Bromley.

A second reference came from the Philadelphia Inquirer on October 26, 1900, in which a brief article reported that a group of laborers had unearthed crumbling coffins containing human skeletons while digging a basement for a new house on Hall Street, the alley bordering the west side of the church campus, where the rectory stands today. The unnamed author states that the remains were believed to be those of “members of a colored settlement which populated this district a hundred years ago.” If accurate, the graveyard would predate the parish by a half-century.

“References like these raise alarm bells with us,” said PAF President Doug Mooney. “So we advise: proceed with caution. We don’t know if this cemetery extended all the way to where the rectory is now,” noting that the church’s property lines have changed over time. 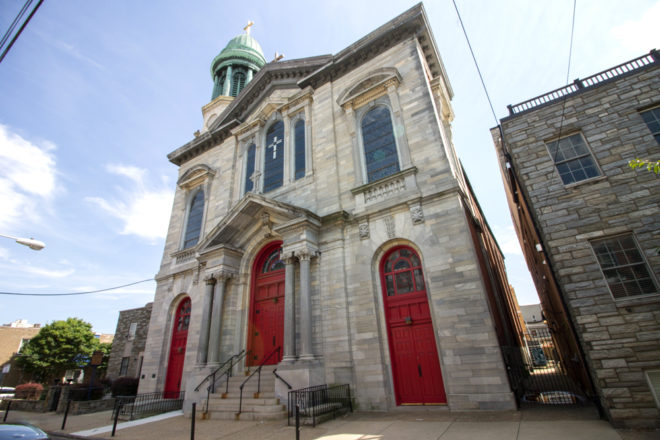 According to Mooney, there is no indication in the church records of any graves being relocated. Even if that had occurred, he explained, “It’s not unusual for cemeteries to not be fully moved.” In populous cities like Philadelphia, a shortage of space led to the practice of stacking graves, and as a result, only those near the surface would be relocated to make way for new construction. In this instance, the Inquirer article in fact refers to the graves being “piled one on top of the other.”

No plans to conduct an archaeological due diligence study have been announced by Ambit Architecture, the designers for the developer, who did not reply to an email requesting information.

According to Eugene Desyatnik, president of the Bella Vista Neighbors Association (BVNA), the proposal called for less open space than the parcel’s RSA-5 zoning district requires, and included front-facing garages, which are prohibited. It is therefore not yet cleared its way through the BVNA zoning committee and the city’s Zoning Board of Adjustment.

Even if construction eventually gets underway, if more remains are found, archaeologists might then have an opportunity to weigh in. “In Philadelphia, unmarked graves are under the jurisdiction of Orphans’ Court,” said Mooney. “It’s the only entity that can authorize such bodies to be moved.”

He went on to explain that if human remains are discovered, the coroner must be contacted. If they’re of a historical nature, the developer can petition Orphans’ Court to remove them to a new site.

Another issue that surfaced when the development plans for the rectory were begun was the fate of one of the building’s tenants, the Mario Lanza Institute and Museum. It was established in 1962 to provide scholarships for early career singers to further their training and operates a museum featuring photos and artifacts related to Mario Lanza, the Philadelphia-born operatic tenor and film star of the 1940s and 50s. It had been housed in the former rectory since 2002. Happily, this issue has been resolved. “We’ve moved to 1214 Reed Street, have been renovating the location and are about three-quarters done,” reported museum president Bill Ronayne. “We hope to be open to the public by November if not sooner.” They’re continuing their capital campaign for the move with a fundraiser, appropriately, at the Victor Café, replete with their singing waitstaff, on July 31.