A Crude Awakening: Explosion On The Schuylkill Brings Philly’s History Of Oil Refineries Into Focus 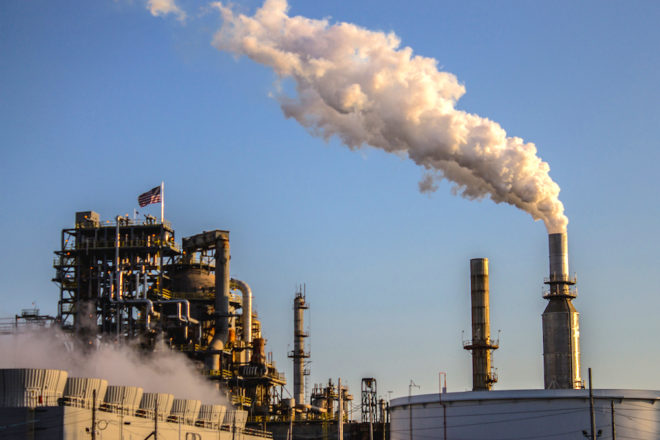 The explosion and fire in the early morning of June 21 at Philadelphia Energy Solutions’ (PES) 1,300 acre refinery in Southwest Philadelphia shocked the city. Five days after the accident PES announced that it will close the refinery, the largest on the East Coast, bringing about the end of Philadelphia’s 150 year involvement in the crude oil industry. The discovery of petroleum in Titusville, Pennsylvania in 1859 set off a “black gold” rush that would profoundly affect Philadelphia’s economy. The oil boom also heavily influenced the shape of the city’s physical form. The original refinery’s tidewater location at the end of rail lines leading from the oil field made it an ideal location to refine, store, and distribute the product while its threat to the city’s water supply was the genesis of Fairmount Park’s expansion along the Schuylkill River.

The Belmont Petroleum Refinery (or Oil Works), one of the first in the United States, was built in 1865 along the Schuylkill River near Boelsen Cottage on what today is known as Dr. Martin Luther King Jr. Drive. The owner of Belmont Mansion sold off six acres to Joseph Newhouse in 1864, and Newhouse formed a consortium to exploit the new discovery. Just west of this site, the Philadelphia and Reading Railroad (P&R) had opened its main line linking Center City via the nearby Columbia Rail Bridge with points to the north and northwest. At the time P&R was negotiating with the Pennsylvania Railroad and the Philadelphia, Wilmington and Baltimore Railroad to construct a jointly-owned line, the Junction Railroad, from there southward to Grays Ferry along the Schuylkill River’s west bank and to points south. It would have been an ideal location for an oil refinery if not for the fact that it was adjacent to the source of Philadelphia’s water supply and a short distance upriver from the Philadelphia Water Works.

The refinery had six underground oil storage tanks and a waste pipe running into the river. This was the only argument needed for the City of Philadelphia to buy out the refinery in 1870 and extend Fairmount Park along the Schuylkill River above the Fairmount Dam. Henceforward, the oil refining industry would be located below the Fairmount Dam where its noxious effluences could not endanger the city’s water supply. The site of the Belmont Oil Works is now occupied by the 1930s WPA-era stables adjacent to Boelsen Cottage. 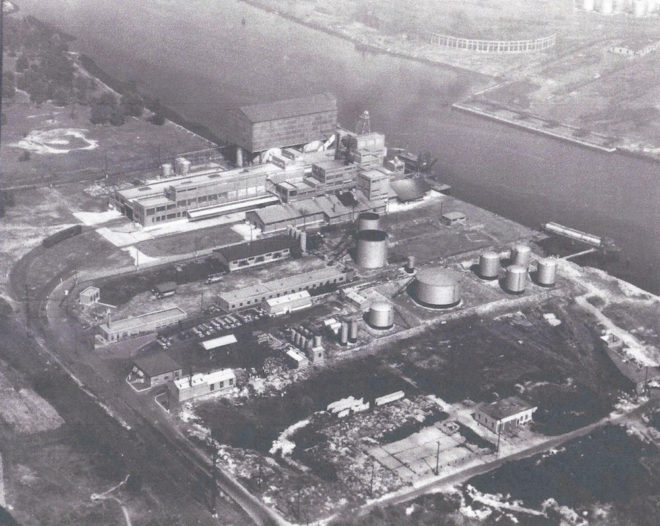 On west bank of Schuylkill River, the U.S. Gypsum plant (with elevated shed) and Socony-Vacuum Oil Terminal in 1932. This was original site of Gulf Oil Refinery. Bartram’s Garden is to left of U.S. Gypsum. Note across the river the engine roundhouse of the B&O Railroad’s East Side Yard. | Image courtesy of the Dallin Aerial Surveys Collection, Hagley Library and Museum

The refined output of Belmont Works and another nearby refinery, the smaller Park Oil Refinery near the site of the Philadelphia Zoo, was shipped to a storage facility in Point Breeze below the Fairmount Dam, but with the refineries’ closure the Point Breeze facility became the new refinery site, to be known as the Atlantic Refining Company. By 1882 it had become one of America’s largest refineries, employing nearly 3,000 workers and producing over 100 million gallons of refined oil. By 1891, Philadelphia was accounting for 35% of all U.S. petroleum exports and Atlantic Refining was producing nearly 50% of the world’s illuminating fuel, the original use for gasoline. Its plant was at this time located north of Packer Avenue, while to the south the area largely remained small farms for a few decades in a rural area of the city remembered fondly as “The Neck.”

William Lukens Elkins is forever linked with Atlantic Refining Company. A prosperous grocer, Elkins was an early investor in “black gold” and, by 1875, was a partner in Standard Oil, the company credited with creating gasoline. With his business partner Peter A.B. Widener, Elkins focused on transportation investments and controlled much of the City’s public transit system. The pair would eventually become two of the richest men in Philadelphia’s history.

Atlantic Refining’s Point Breeze refinery was joined in the early 1900s by Gulf Oil, originally on a small site adjacent to Bartram’s Garden. Gulf soon outgrew this facility and relocated to a much larger site of 625 acres at Girard Point in 1920. The company sold its former refinery to U.S. Gypsum for their drywall plant, reputedly the first in the United States, and its tank farm to Socony Vacuum Oil Company (later Socony-Mobil and now Exxon Mobil). Socony was a distributor, not a refiner, and purchased output from Gulf and Atlantic, as did other wholesalers such as Tidewater Oil Sales, Petro Corp, Water Terminal Fuel Oil Company, Swann Oil, and Allied Oil. The concentration of oil-related activity attracted Union Tank Car Company, which supplied and cleaned the rail cars needed by the refiners and wholesalers. A lively barge operation developed on the Schuylkill River distributing product from the refineries to the wholesalers with docks along the waterway. 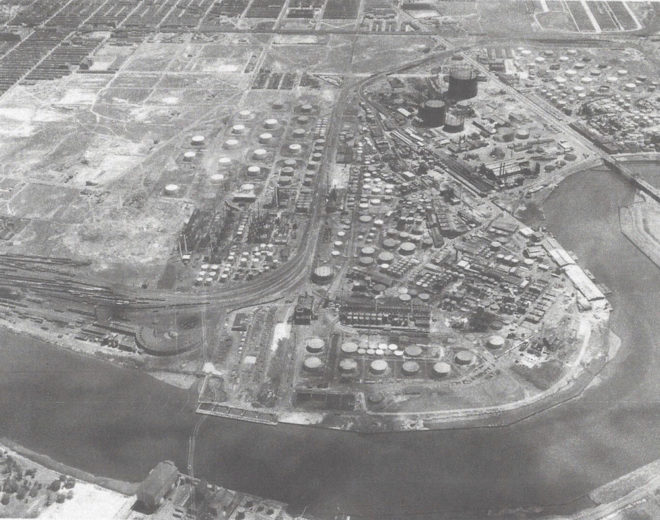 Sunoco left the oil refining business in 2012 as its profit margins had become too thin. Philadelphia’s political and business leaders scrambled to find a replacement company that would keep the facility open and employing its 1,000 unionized workers. A joint venture consortium of the Carlyle Group and Energy Transfer Partners (formerly Sunoco) headed by Philip L. Rinaldi created Philadelphia Energy Solutions (PES) to reactivate the plant, taking advantage of a price differential that was created by the increasing amounts of American petroleum resulting from a new method of drilling, hydraulic fracturing or “fracking.” America had become awash in petroleum as domestic supply exceeded demand, and it was then illegal to export petroleum from the United States. Much of this excess was warehoused in a sprawling tank city in Cushing, Oklahoma. So much, in fact, that a new oil price was created, the Cushing price as compared to the world standard Brent price, with Cushing often trading at 10% or more below Brent. The oil being produced in the Bakken field of North Dakota could be transported to Philadelphia at the Cushing price on oil trains and through a rail terminal subsidized with state grant funds. It would provide a profit for PES because of the Cushing discount and the capital subsidies.

Alas, oil drillers prevailed on Congress to permit export of American petroleum, and the Cushing discount disappeared. Loss of the discount was a factor in PES declaring bankruptcy (along with Carlyle Group paying itself a $600 million dividend), but it underwent reorganization, debt was exchanged for equity, and it appeared that the refinery had yet again escaped closure. That is, until the explosion this June. 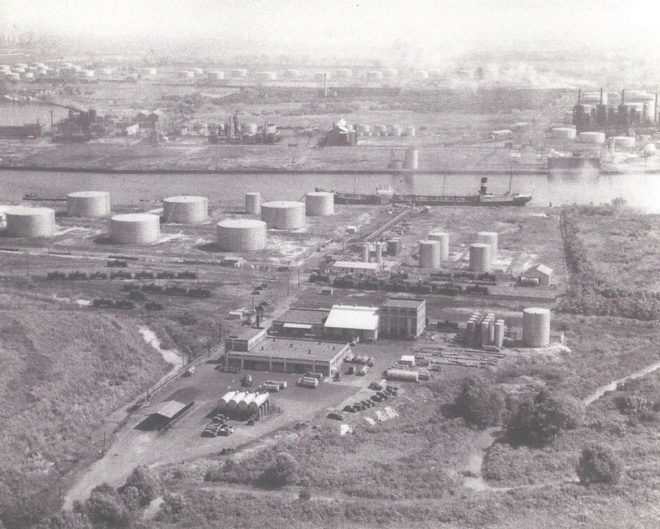 It is inevitable that long, heated discussions will arise, and indeed has already begun, on possible reuses for the refinery. While some Philadelphians and politicians may be hoping that the refinery will eventually reopen and once again process crude oil, what if that does not happen? 1,300 hundred acres would be a considerable development opportunity if it were successfully remediated and environmentally restored. That responsibility remains with Sunoco for pollution occurring before 2012 and with PES for pollution afterward.

Two possible reuses come to mind, certainly not the only two as many more will be suggested, but a pair worth considering. Back in the day–before refining, before farming, before Europeans even–the Lower Schuylkill River was a vast intertidal freshwater wetland, a buffer protecting the upriver shoreline from destruction and flooding wrought by hurricanes and Nor’easters.  The wetlands were so vast that Dutch explorers had difficulty finding their source and called it the hidden (Schuyl) river (kill). With the prediction of future global warming causing sea levels to rise, and with the warming atmosphere now holding more moisture that is being released in increasingly violent storms, perhaps a regrading of a portion of the site to intertidal elevations and replanting with wetlands flora might give Philadelphia’s future a first line of defense. Another possible reuse, compatible with wetlands, might involve solar and wind farms to generate electricity, sited perhaps on hills formed by pollutants encapsulated during remediation. For the sake of the 1,000 refinery workers looking at the loss of their jobs one would hope for some sort of smart solution, but it would be shortsighted not to consider safer and cleaner options.