It’s Pride Month and this year marks the 50th anniversary of the Stonewall riots that took place in New York City on June 28-29, 1969. Communities across the country are honoring the date through a month of celebrations and retrospectives. At William Way LGBT Community Center, a large-scale art installation puts Stonewall in conversation with the broader history of the fight for queer liberation. The exhibition, Tonight is Forever, uses over 5,000 images from William Way’s John J. Wilcox, Jr. Archives to create wallpaper spanning the entire lobby. The images are both local and global in scope. Philadelphia’s role in the movement is clearly on display, but the exhibition also makes clear how our city’s contribution to activism fits into a larger narrative. 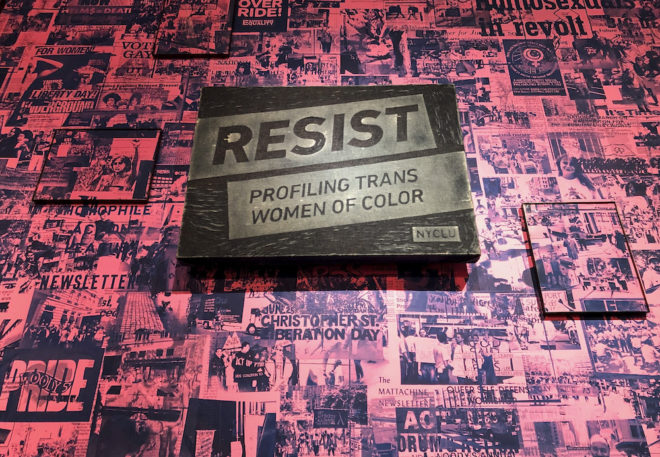 Tonight is Forever is a large-scale art installation at William Way LGBT Community Center that celebrates the struggles and triumphs of the queer liberation movement. | Image  courtesy of Gabriel Martinez

The photographs used span from before Stonewall and carry through to the present day. Images from Philadelphia appear alongside those from across the country and different decades appear next to each other. The installation is not meant to convey a linear timeline, but is rather a visual homage to the moments and shapes that the fight has taken. “I was looking at information from the archive that predated Stonewall and also covered yesterday as well. Everything was fair game, but specifically within the lens of work that was political,” said artist Gabriel Martinez, the creator of the installation.

Philadelphia played a key part in the pre-Stonewall struggle for rights, and that story is one of the things that Martinez wanted to make evident. For example, there are images of the Annual Reminders protests that occurred annually on July 4 between 1965 and 1969 outside of Independence Hall to bring attention to discrimination against gays and lesbians. These protests were the among the first of its kind and were part of what laid the groundwork for later and more radical protests.

There are also images of the Dewey’s lunch counter sit-in in 1965. Dewey’s restaurants, with former locations at 219 S. 17th Street and 208 S. 13th Street, were popular gathering spots for LGBT social groups. After the restaurant began denying service to anyone who appeared to be gay, lesbian, or gender-nonconforming, local activists worked with the Janus Society to plan a series of sit-ins and to hold an informational picket outside of Dewey’s 17th Street location. After five days of protests, the restaurant changed its discriminatory policy. 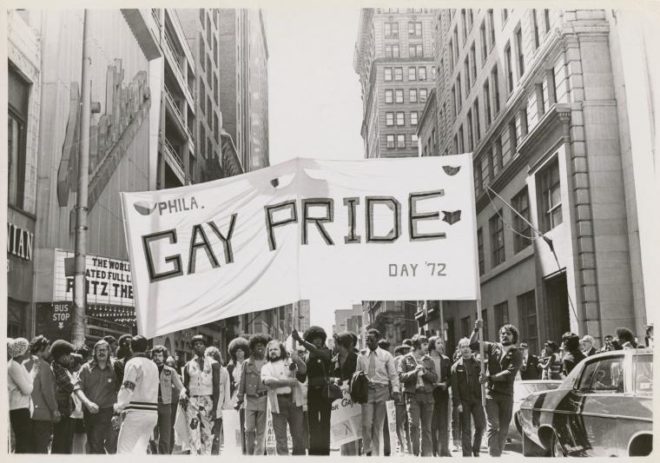 The Annual Reminders and the Dewey’s sit-in are considered to be key moments in the pre-Stonewall era of LGBT activism. Yet, the installation also includes lesser-known stories as well. For example, there is a flier for condom distribution on the first day of school at West Philadelphia High School. Although it is unclear the year of this action, the fight for condoms in schools was a key demand of AIDS activists at the height of the epidemic and is still a controversial issue in Philadelphia. Through these lesser known moments, the installation demonstrates how the LGBT rights movement is much more than just the bigger, more famous protests and is also made up of many acts of resistance.

Some of the more recent content in the exhibition includes images from Philly ACT UP, Galaei, Mazzoni Center, and others. Martinez explained that he wanted the installation to commemorate the anniversary of Stonewall, but to also put it into a much larger story and honor “the continuation of the struggle on a daily basis.”

One of the ways that Martinez made sure to highlight contemporary stories is through soliciting images from Philadelphians. Towards the end of his research process, Martinez asked locals to send him photographs of themselves, either on their own or at a Pride parade or at a protest. These images are presented in frames and hung on top of the wallpaper. Combined with the archival material, the collection of images not only tells a story of queer liberation, but shows the process of archives and collective memory in shaping our own historical narratives. 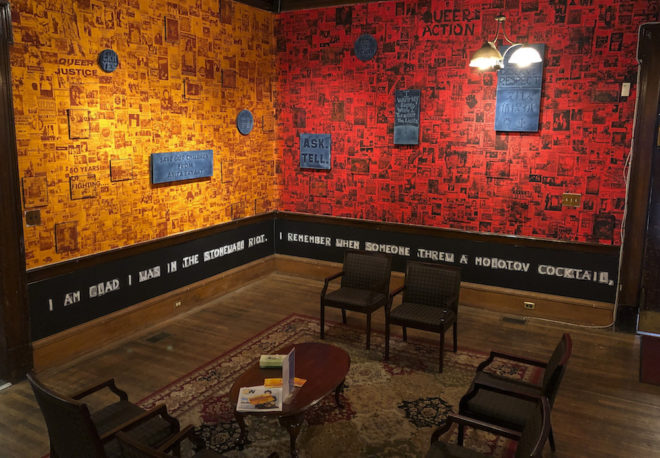 A quote by trans activist Sylvia Rivera describes what it felt like for protestors during the Stonewall Riots. | Image courtesy of Gabriel Martinez

Martinez explained his choice to use Rivera’s words to pull the installation together: “It’s really important in 2019 to acknowledge someone like Sylvia Rivera in our history. The quote also has a sense of urgency and joy, which is what I want people to sense in the show. The intermingling of struggle and anger and fighting along with jubilation and joy.” The text is written on the wall with stencils from Philadelphia ACT UP, one more way that Martinez intentionally connected different historical moments and locations in celebrating queer political history.

Tonight is Forever is open to the public and on view in the lobby of the William Way LGBT Community Center at 1315 Spruce Street through June 28. The center’s hours are Monday through Friday from 11:00AM to 10:00PM and Saturday and Sunday from 12:00PM to 5:00PM.