The Origins Of The Eagles On The Market Street Bridge 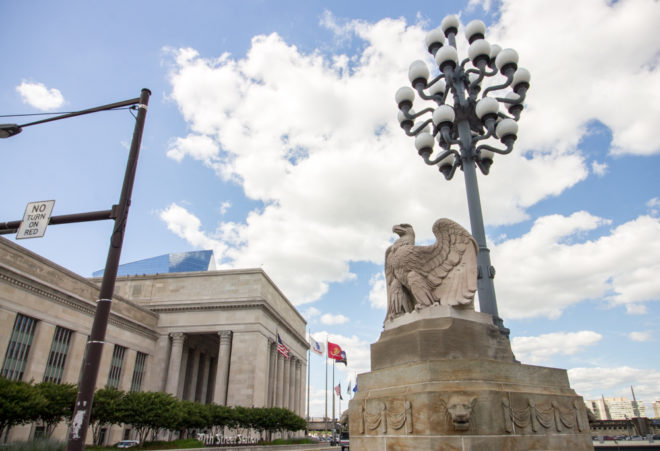 This NYC transplant on the Market Street Bridge flew into Philadelphia following the demolition of Penn Station in Manhattan in the 1960s. | Photo: Michael Bixler

A Center City commuter walking west along Market Street to 30th Street Station will encounter large granite eagles guarding the four corners of the Market Street Bridge over the Schuylkill River.  How and why did they land there and from where did they come? The answers are found in perhaps the Pennsylvania Railroad’s greatest triumph, and in its most controversial decision, to build and then to demolish New York City’s Penn Station.

Making Connections with the Pennsylvania Railroad

The Pennsylvania Railroad (PPR), arguably Philadelphia’s most notable legacy companies, was founded in 1846 to provide business interests, especially shippers using the Port of Philadelphia, with reasonably efficient connections to Midwestern markets which was increasingly passing through the Port of New York. The State of New York’s construction of the 362 mile long Erie Canal, the Water Level Route, was completed in 1825. It linked New York City with Buffalo and Lake Erie by way of Albany and the Hudson River. In just a few years the route vaulted New York City into prominence in international trade and commerce that it has held ever since. The Erie Canal had provided the Port of New York with an eight-year running start that the PRR would never be able to overcome.

Pennsylvania’s belated response, the Main Line of Public Works, a 394 mile long system of canals and railroads completed in 1834, offered shippers a slow and cumbersome crossing of the Appalachian Mountains to markets in Pittsburgh, Cincinnati, and other rapidly growing markets.  In response, a dozen years later Philadelphia Port interests founded the PRR to create a truly competitive all-rail alternative.

While the PRR failed to win back enough commerce to return Philadelphia to its lost prominence, it succeeded in meeting its backers’ expectations as a rapid and efficient transportation service that served the City’s growing manufacturing economy quite well.

The Erie Canal’s successor, the New York Central Railroad, was created by Erastus Corning in 1853 with a merger of a dozen small railroads and acquired by Cornelius Vanderbuilt in 1867. The NYC and the PRR contented themselves with western expansion during the first decades of their existence, the PRR substituting railroad tracks, such as the Horseshoe Curve, for the Main Line’s canals and acquiring the Pittsburgh, Fort Wayne and Chicago Railroad. The NYC matched it with its lease of the Cleveland, Cincinnati, Chicago, and Saint Louis lines. But, by the 1870s, routes to the West were largely established and their interest shifted to creating North-South linkages. The PRR acquired the United Railroads of New Jersey, bringing them access to the western shore of the Hudson River while the PRR’s Philadelphia rival, and Vanderbilt ally, Philadelphia and Reading Railroad, patched together a series of New Jersey lines to get them to Newark. The PRR’s acquisition of the Philadelphia, Wilmington, and Baltimore Railroad allowed them opportunity to construct a line south to Washington, while the Reading Railroad’s partner, Baltimore and Ohio Railroad (B&O), built a line north from Baltimore to a connection with the Reading in Philadelphia. 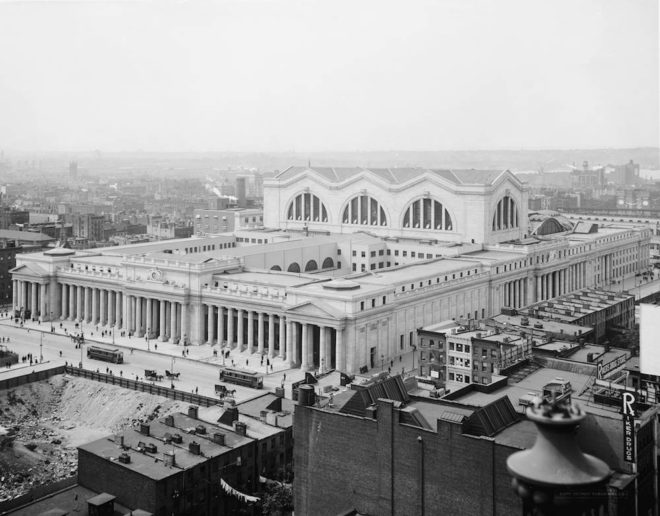 Aerial view of Penn Station in New York City circa 1910. | Image courtesy of Prints and Photographs Division, Library of Congress

A major reason why the New York Central Railroad could dominate the New York marketplace was because it was the only railroad operating in Manhattan. All of its competitors, including the PRR, terminating at the docks of Jersey City and Secaucus on the west shore of the Hudson River. The NYC followed the line of the Erie Canal to Albany, then crossed the Hudson River on a bridge for the final segment southward to Manhattan on the river’s eastern shore. In 1871, the NYC built the first Grand Central Station, accessed by a track running at grade in the bed of 4th Avenue, but traffic conflicts eventually forced it to lower its access track into a tunnel. The smoke and soot from steam engine operations there was most unhealthful, and, after a particularly awful fatal accident in 1902, legislation was passed prohibiting steam engines in Manhattan after 1908.

For the PRR, cargo and passengers would have to be transported in ferries or boxcar “lightering” barges from Jersey City across the Hudson River to the docks on Manhattan’s west side, as the challenge of creating an all-rail route into Manhattan seemed insurmountable. Tunneling was not an option for the PRR, as the exhaust gases of steam locomotives working over such a distance would be fatal and a bridge spanning New York Harbor too expensive. An alternative presented itself at a remarkable fair held in Philadelphia in 1884, the International Electrical Exhibition. This exhibition, attracting 289,000 visitors during its six-week run, displayed 1,500 examples of electricity powering such diverse processes as printing presses, sewing machines, pipe organs, and the running of electric trains. The PRR was very much involved in staging the exhibition, donating its vacant Centennial Station at 32nd and Market Streets as the venue for about half the space needed by its sponsor, the Franklin Institute.

Electricity powering transportation caught on very quickly. By 1890, electric trolleys were operating on Lehigh Avenue. By 1895, the B&O Railroad was running electric locomotives in a 7,300 foot long tunnel beneath Baltimore Harbor, and the PRR had created an experimental electric service on a branch line running between Burlington and Mount Holly, New Jersey. In March of 1900, the mayor of New York broke ground for the Interborough Rapid Transit, Gotham’s subway system. In 1901, PRR president Alexander J. Cassatt traveled to Paris to observe the opening of the electric-powered Orleans railway. He returned confident enough that this technology was the way to haul trains between Jersey City and Manhattan that he announced that the PRR would tunnel its way into Manhattan. Not content with only a West River crossing, the PRR would also tunnel under the East River connecting to the PRR’s Long Island Railroad. The two single-track West River tunnels were completed in 1905 and the four single-track East River tunnels in 1908. In 1903, spurred on by its competitor and the looming termination of steam engine operation in Manhattan, the NYC announced its decision to construct a new electrified Grand Central Terminal which was completed in 1913. 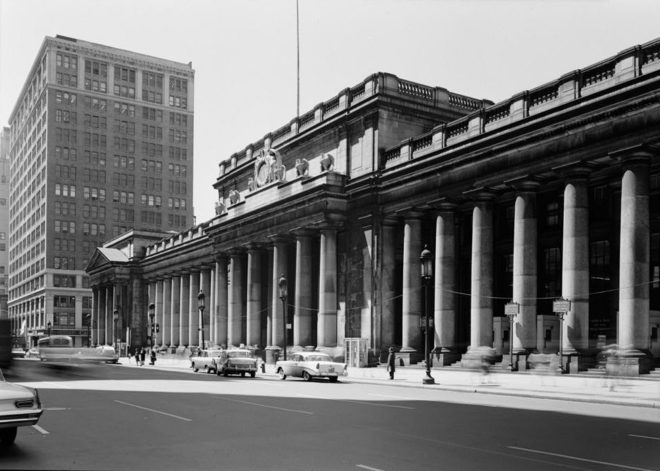 East facade of Penn Station along 7th Avenue in 1962. The station’s granite eagles can be seen above the station’s entrance. | Image courtesy of Prints and Photographs Division, Library of Congress

The PRR commissioned the firm of McKim, Mead, and White to design the new station in Massachusetts pink granite with an imposing colonnade of Doric columns. Its street frontage resembled Berlin’s Brandenburg Gate. Regarded as a masterpiece of Ecole des Beaux-Arts style when completed in October of 1910, the station’s roof was decorated with 14 large pink granite eagles each weighed 5,500 pounds and eight smaller eagles of Tennessee marble. These eagles were designed in 1904 by the architectural sculptor Adolph Alexander Weinman, a German immigrant.  The station’s style reflected the neoclassical building designs of the 1893 Chicago Columbian Exhibition. These designs introduced sculptural adornment to the United States as epitomized by Philadelphia’s ongoing City Hall construction, which included hundreds of sculptures designed by Alexander Milne Calder topped by the large fineal of William Penn.

Weinman went on to produce architectural sculpture for many other buildings, among them the Thomas Jefferson Memorial and the Manhattan Municipal Building. He took a turn at numismatic design, creating the Winged Liberty dime and the Liberty Walking half dollar in 1916, considered to be among America’s most beautiful coinage. The half dollar’s reverse side featuring an eagle in life-like form remarkably similar to the Penn Station eagles. His design of the Liberty Walking coin’s obverse side has been revived currently by the United States Mint on the American Silver Eagle coin containing one troy ounce of silver. Weinman himself was honored in Philadelphia in 1949 at the 3rd Sculpture International Exhibition held at the Philadelphia Art Museum.

The Death of a Once Great Station

Penn Station served the PRR, its subsidiary Long Island Railroad, the Lehigh Valley Railroad, and the New Haven Railroad. During World War I, when the federal government nationalized the American railroad industry, the station also served the Royal Blue Line trains running on the B&O line. At its peak in 1945, Penn Station was used by 107,684,525 passengers. Its rival, Grand Central Station, peaked at 65 million passengers in 1947. From then on, the combination of jet age travel and construction of the Interstate Highway System diverted away more and more rail passengers away each year. With declining usage, the cost of Penn Station’s maintenance became seriously burdensome and was often deferred with unsightly effect. As all of the rail infrastructure was below grade, the PRR reasoned that it could option its overbuild station head house and train shed’s air rights, relieving it of that maintenance expense. In 1963 Penn station was demolished to be replaced by an office building and sports complex above an unadorned waiting area. The demolition of this beautiful station sparked international outrage at PPR’s monumental act of vandalism, accelerating the growth of the historic preservation movement. Most of the station’s debris was dumped in the Hackensack Meadows. 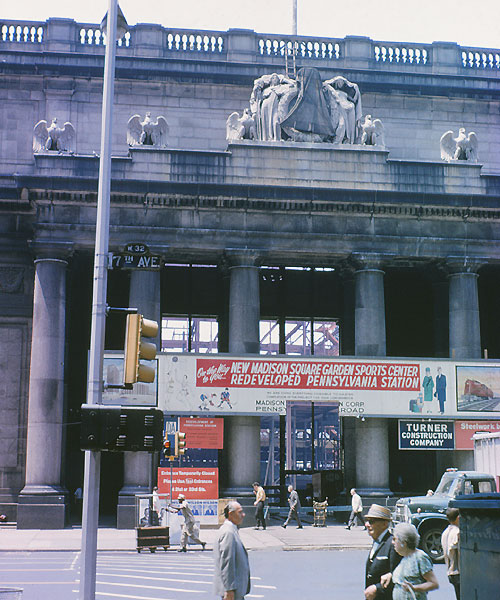 Demolition of Penn Station in June 1966. At this stage the the granite eagles have yet to be removed. | Image courtesy of TrainWeb.org

The interstate highway construction program did not just affect rail passengers, but rail freight as well. Manufacturers and wholesalers in the Northeast and Midwest abandoned downtown multi-story structures and their unionized workforces for the cornfields and pastures of the surrounding suburbs and, later, for the industrializing “right to work” South before moving abroad in the 1980s. The railroad industry attempted to compensate for lost business by undertaking end-to-end mergers with connecting carriers to capture more revenue and achieve operational economies, but the 1968 merger of the parallel PRR and NYC was disastrous. Their bastard offspring, Penn Central, attempted a repeat of an air rights option sale of Grand Central Station, but it was blocked by the New York City Landmarks Preservation Commission.

The PRR’s decision to sell its Penn Station air rights was made in their Philadelphia executive offices in 30th Street Station. Ironically, the PRR’s 1963 gifts of four of Penn Station’s 14 granite eagles to the Fairmount Park Art Association were installed in 1967 within sight of the executives who had made that extremely unpopular air rights decision. As a further irony, the Market Street Bridge had been rebuilt by the City of Philadelphia as part of its 1925 Terminal Agreement with the PRR that resulted in the PRR’s decision to construct 30th Street Station. One might dare say that the PRR’s eagles had come home to roost.