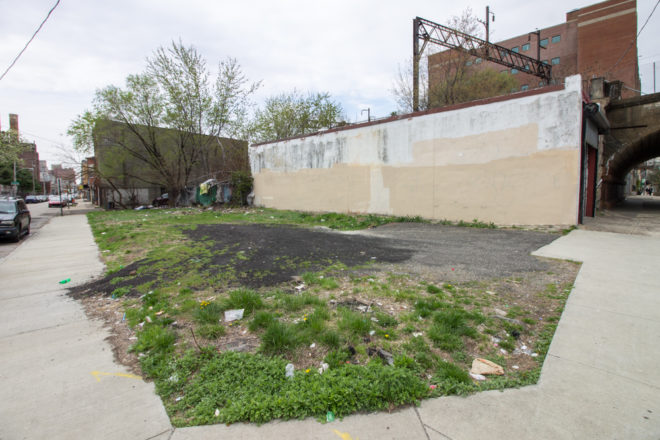 Roughly 70 people gathered in a SEPTA conference room at 1234 Market Street on Wednesday night. Many came to testify before the board of the Philadelphia Land Bank and weigh in on its newly-released strategic plan and performance report. Others were there to express solidarity with the speakers through their presence, verbal affirmations to the testimony, and t-shirts identifying their allegiances. “We are the good guys from the BADLANDS” was emblazoned on one shirt. Residents came from nearly every corner of the city, from different neighborhoods and different backgrounds, but their messages were unified.

Misgivings, anger, and fear were universal themes in the testimonies. Several speakers urged the City to change the way it measures affordability, from using the Philadelphia-Camden-Wilmington metro area average median income (AMI) to that of individual neighborhoods. “That AMI would be high income in my neighborhood,” said Patricia DeCarlo, interim executive director of the Norris Square Community Alliance, explaining that the higher measure results in housing development that is not actually affordable in lower income neighborhoods.

Many expressed frustration with the lengthy response time, or lack of response at all. Steven Jones said it took him 12 years to acquire the side lot he’d been cleaning and gardening for decades. He urged the Land Bank to offer more access to land acquisition for low and moderate income residents.

Sadly, Jones appeared to be among the lucky ones. Adam Butler described the runaround he and other members of the César Andreu Iglesias Community Garden have received as they’ve tried to acquire the City-owned lots in Kensington where they’ve been gardening for over seven years. “Our City Council member’s office says it’s waiting for the Land Bank’s decision and the Land Bank says it’s waiting on the Council member’s office.” Butler said that, out of desperation, the group offered to buy the lots at the published market rate of $12,000 each, but received no reply to their inquiry.

After being evicted from her home of 28 years along with 250 other building residents, Dominique London said she attempted to buy two lots from the Land Bank but, like Butler, never received a reply. She accused it of “operating like a sheriff’s sale. There’s no opportunity for residents to compete with developers.”

With each speaker, the audience’s applause grew more raucous and the verbal responses increased, especially when the comments expressed anger and fear over the changes occurring in their neighborhoods.

“The real estate market is out of control,” said Queen Village resident Bernadette Peoples. “People are becoming homeless every day.” Noting she is on the front lines of gentrification, having lived in Northern Liberties for over 20 years, Stacy Moore exhorted the Land Bank to think beyond the financial side, saying, “You need to hear how your policies affect the lives of people in these neighborhoods.”

Among all the complaints and concerns, however, were some hopeful remarks. Ebony Griffin of the Public Interest Law Center applauded the Land Bank’s plans to better publicize the application process and work with external organizations.

Suggestions for improvement included dropping the requirement of City Council approval for the disposition of each property and reducing the costs incurred by the Land Bank when acquiring privately-held delinquent properties. At its current acquisition rate of about 325 each year, it would take 90 years to get title to all these properties, which total nearly 30,000.

Beth McConnell, policy director with the Philadelphia Association of Community Development Corporations, expressed concern that the original vision for the Land Bank to be financially self-sufficient—to use the revenue generated from the sale of properties to fund its operations—creates a pressure to sell at market rate to developers and is at odds with the interests of current residents of these neighborhoods. She noted, “No other public entity is required to fill their budgetary gap.”
The board of directors of the Land Bank, consisting of members from the finance and real estate sectors and City employees, including staff from five councilmanic offices, listened attentively to the testimony. They spoke up only once to clarify a concern articulated by several presenters, that proposed changes to the acquisition and disposition policies were not included in the draft, which stated they would be submitted to City Council with the strategic plan, seemingly without opportunity for public comment. Jennifer Kates, Land Bank Vice Chair and Councilwoman Helen Gym’s chief of staff, assured the crowd that this was an error.

The lengthy strategic plan outlines 28 recommendations for improvement in the areas of land acquisition, the disposition of parcels, and operations. The plan it will be sent to City Council upon the addition of the aforementioned revisions to the acquisition and disposition policies and public comments.